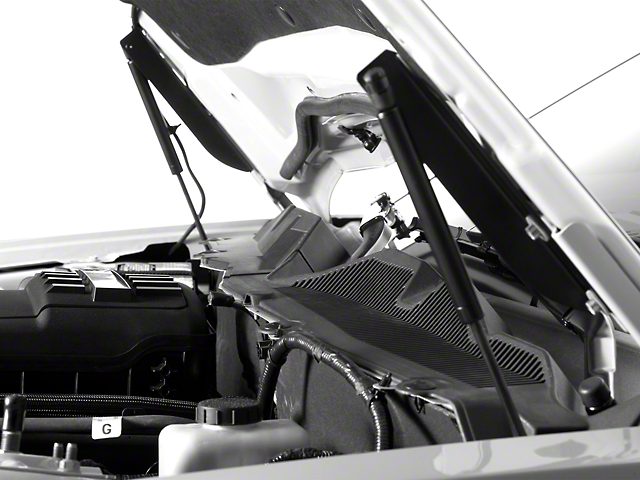 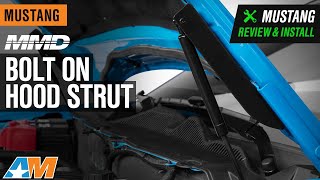 Justin: Now, one of the best modifications I've ever done to my S197 was ditch that factory prop rod in favor of a set of Hood Struts like the black options that we have here from MMD, available for all 2005 to 2014 Mustangs. Now, this set of two hood struts will combine the two upper and two lower stamped steel brackets, along with your two gas-powered struts in black for right around that $80 price point. Now, install according to the site, will actually get a very soft two out of three wrenches on the difficulty meter here and take about an hour or less, depending on whether or not you're doing this by yourself or maybe with a friend. But either way, guys, if you hang with me for a little bit, we'll show you how it's done later in the video. So, full disclosure here, guys. This is one of the first modifications I've ever done to my 2014 GT after I brought it home and for a good reason. Not only are they very affordable in the grand spectrum of car mods, but they dramatically clean up the engine bay by eliminating that archaic factory prop rod. And two, it just makes working in the engine bay a much easier task, as you're not kind of dancing around that prop rod while you're turning some wrenches. Now, the product itself is pretty simple, overall, right? You got your two uppers, two lowers, as far as your brackets are concerned, one for the hood, one for the fender area, and then finally, those guys are gonna be joined by the twin gas-powered struts here, which ultimately, make opening and supporting the hood a much easier task.Now the best part is, guys, this kit is super easy to install. It does not require any permanent modification or drilling and really can be used on both stock or aftermarket hoods alike. Now I do quickly wanna point out that, yes, technically, this kit is designed to fit all S197s. However, you need to be mindful when ordering, as a site does break it out into two different year ranges. For instance, '05 to '09 cars, will require the item number 41282A, while '10 to '14 Mustangs will utilize 41282B. Also, keep in mind, here gang, that MMD does also offer the same exact kit, but in a chrome or silver finish, for owners looking for more of a pop under the hood, which obviously is also available here on the site for about 10 to 20 bucks more than the stealthier black options that we have here. But now we wanna show you just what it takes to get everything installed. However, some folks have stated out there, it's a little easier with an extra set of hands, basically, there to help out when needed. Regardless, we're gonna walk you through the job right now and give you a quick tool breakdown. Check it out.Man: The tools used for this install are a quarter-inch ratchet, 10-millimeter socket, a razor knife, small flathead screwdriver, and a marker. So the first step of this install is gonna be to get your hood open and remove the fender bolt located for this back on the fender. I'm gonna use a 10-millimeter socket on a ratchet and unscrew the bolt. Next, you're gonna take the provided bracket for the passenger side and bolt it right into the factory location with the factory bolt. Now that I have my bolt started, I can tighten it down. For the next step, I'm gonna make sure that the hood is very properly supported, and then I'm gonna remove the forwardmost bolt and loosen up the rear bolt. With one bolt removed and the other one loosened up, I can slide my bracket into place between the bolt and the hinge. I'm gonna make sure that I clear my windshield washer hose before I tighten up any of my bolts. To make it a little easier to pop the socket onto the ball end, I'm gonna remove the retaining clip and reinstall it after the strut is installed. And finally, I can connect the other end of the socket. And now, I'm just gonna throw the last clip into the ball socket. If you have a 2010 to 2014 model Mustang, then you're gonna need to relocate the bracket for the sound tube to underneath the pinch weld. You're gonna need a 10-millimeter socket and then you're gonna have to relocate the U-bolt that's located underneath of this bracket.Next, I'm gonna use a small flathead screwdriver and remove the metal bushing from the rubber. Now I can remove the square rubber bushing from the bracket itself. Next, I'm gonna make a quick mark on the rubber bushing, where the gusset for the bracket interferes, and I'm gonna cut the middle of the bushing out. Now I'm gonna use a nice sharp razor knife to cut the center of the bushing out. Now, we can reinstall the bushings into the bracket. And now, I can use the factory U-nut and place it underneath the bracket and get the bolt started. And that's gonna wrap up this review and install of the MMD Bolt-On Hood Strut kit for your '05 to '14 Mustang. Thanks for watching. And for all things Mustang, keep it right here at americanmuscle.com.

Prop Rod? Are you still using that old style factory prop rod that Ford installed in your S197 Mustang? Well then join the new millennium with a set of Modern Muscle Design Hood Struts from AmericanMuscle for clean modern looks and convenience.

Style And Strength. Designed to get rid of that old ugly prop rod, this set of two powerful yet sleek MMD gas struts not only makes opening your Pony's hood much easier, but also holds it securely in place. Made from lightweight steel and aluminum, they have a black powercoated finish to give your engine bay a much cleaner appearance.

No Drilling Required. The stamped steel brackets included in this MMD kit are designed to bolt into the existing mounting holes in the hood so there is no drilling required for installation. Struts can be installed on factory hoods as well as aftermarket hoods that use the factory bolt location. If your aftermarket hood is lighter than the factory hood, use caution when opening the hood due to the power of the strut.

Application. This Modern Muscle Design Hood Strut Kit is specifically designed for use on the 2005 to 2014 Ford Mustangs, including the V6, GT, Bullitt, BOSS and Shelby GT500 models. The Kit includes two black gas powered struts, mounting brackets, and all the required mounting hardware.

Mounting require hood removal? With bolt on install, can you leave hood in place with prop rod & install one side at a time or is this a 2 man job with hood removal? Thanx

Helpful (25) Thanks for your input! Show 8 more answers

Are there replacement struts? After just a couple of years they struts that came with this kit will no longer hold up my hood. Are the struts Vehicle specific?

Helpful (14) Thanks for your input!

Strength? Are these strong enough to hold up a fiberglass hood? My hood is heavy and the Drake struts are not able to hold..

Helpful (6) Thanks for your input! Show 5 more answers

Hello, the strut when they need to be changed, can I find them in any autozone? Thank you.

Can these mount even though I have a strut tower bar? 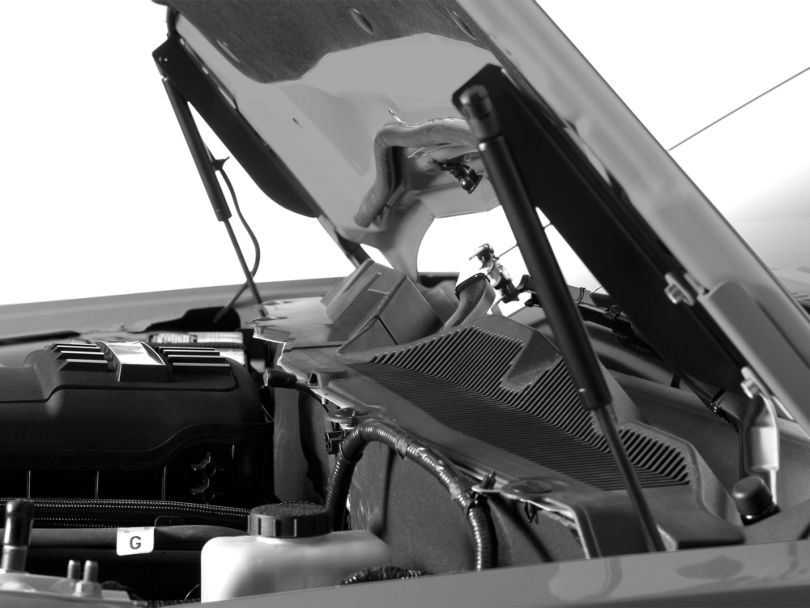