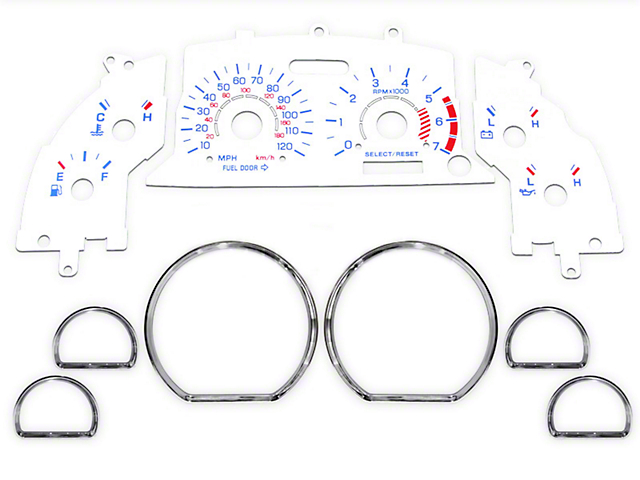 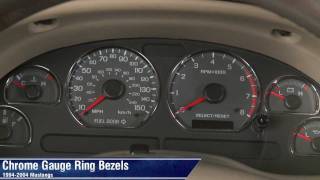 Hey what’s up everyone I’m Justin with AmericanMuscle.com, and I’m taking a look at a mod that’s sure to freshen up the interior of any New Edge Mustang in a snap, I’m talking about chrome gauge bezels for your 94-04 Mustang. This is another one of those mods that Ford should have taken notes on. Once installed these trim rings look like they should have been factory equipment on every Mustang. The kit includes 6 individual trim rings that simply snap into place over your factory gauges, making for an easy install. Now you will have to remove your factory cluster, which really isn’t all that hard to do and should take you 30 minutes from start to finish. However as always if you have any problems or questions whatsoever, you can always refer to the detailed instructions located on this page. It is worth mentioning that these bezels are compatible with aftermarket gauge inserts such as reverse glow white face gauges. And if you’re really digging the look of the chrome and you want more, then you might want to check out our polished billet aluminum interior kit as well, for a show stopping interior. These rank pretty high on the old bang for your buck meter, for the money spent you can’t match the interior styling impact these give your New Edge Mustang, be sure to check them out.

Chrome Dash Rings. Add some retro appeal to your stock gauge cluster with a set of Mustang Chrome Gauge Rings. These rings will set off your new gauge inserts and give them a finished look that will set your Pony ahead of the pack.

Installs Over Factory Gauges. The gauge inserts install directly over the current gauges. You don't even have to remove the needles! And the chrome gauge rings require no glue or adhesives at all - they just snap right in! In just a couple minutes, you'll be able to show off the upgraded, stylish gauges in your 99-04 V6 Mustang. 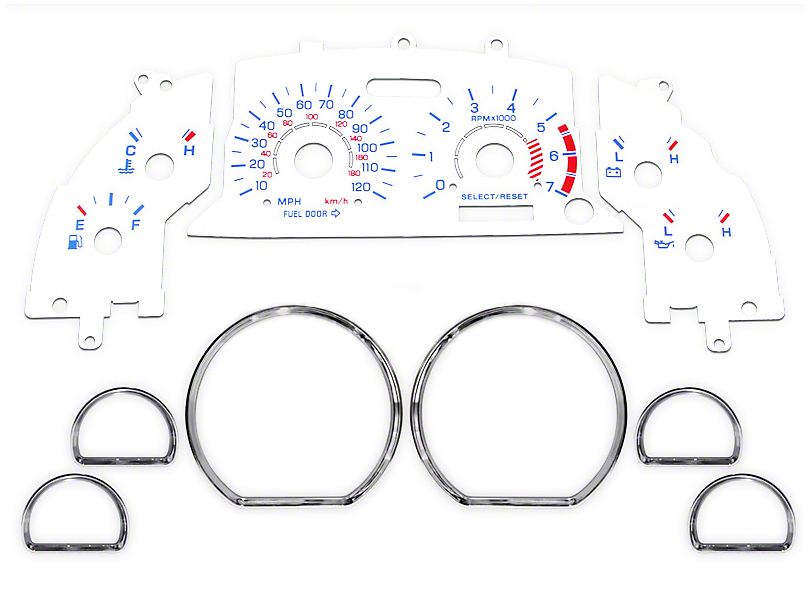