Most Popular in Mustang Suspension Parts

Setting Up Your Mustang's Suspension for Drag Racing vs. Road Courses

One upgrade that isn't drag or road course specific is a roll cage and other chassis bracing. In the event of a crash you'll want something aside from your helmet to protect you. Bracing your Mustang will also reduce body flex for more consistent times.

So you just bought your Mustang and you want to get into racing? Before you begin throwing parts at the car, it’s important to consider your long-term goals. Are you planning on drag racing, road racing, or doing a little of both? There are some basic suspension parts that are common to all types of racing, but as you get more serious about racing more specialized components become necessary. 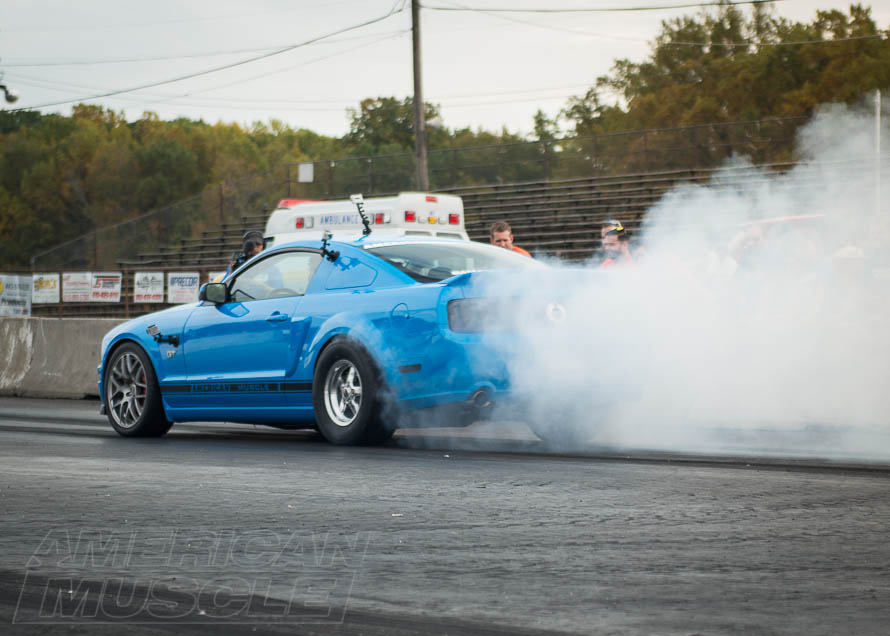 Control Arms: No matter what type of racing you’re doing, the factory control arms certainly aren’t up to the task. Soft rubber bushings allow too much deflection, leading to sloppy handling or wheel hop. Rod-ended or bearing control arms are superior to rubber and polyurethane bushings because they completely eliminate deflection, while still allowing for maximum articulation. On a road course car, bearing control arms are almost always the way to go. Drag racers can typically get away with using polyurethane bushings in their suspension because the suspension doesn’t need to move as freely on a drag strip.

Springs: Generally, you will want to choose a spring that will lower your Mustang. Lowering the center of gravity is important in racing since it will reduce body roll. When choosing a spring, you will also have to consider the spring rates. In drag racing, softer springs are typically chosen because they will allow your Mustang to transfer weight to the rear wheels, enhancing traction. In a handling application, stiffer spring rates are used because they will prevent body roll better. 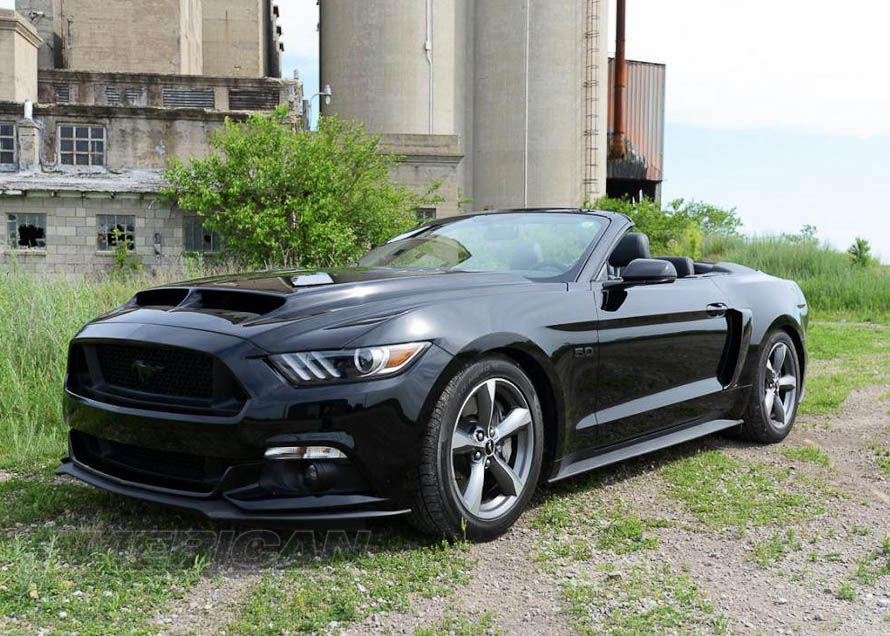 Shocks and Struts: Shocks and struts (also called dampers) are one of the most important pieces to a vehicle's suspension. Poor damper choice will negatively impact your Mustang's ability to perform in a straight line or on the road course. Dampers control spring oscillation and slow down chassis movement. Being able to control how quickly a spring compresses or rebounds will make a car handle or launch much more consistently. Ideally, you would want a damper that is adjustable instead of non-adjustable. Having adjustable dampers is important because each car, driver, and track are all different, and adjustable dampers will give you the ability to tune around those variables. 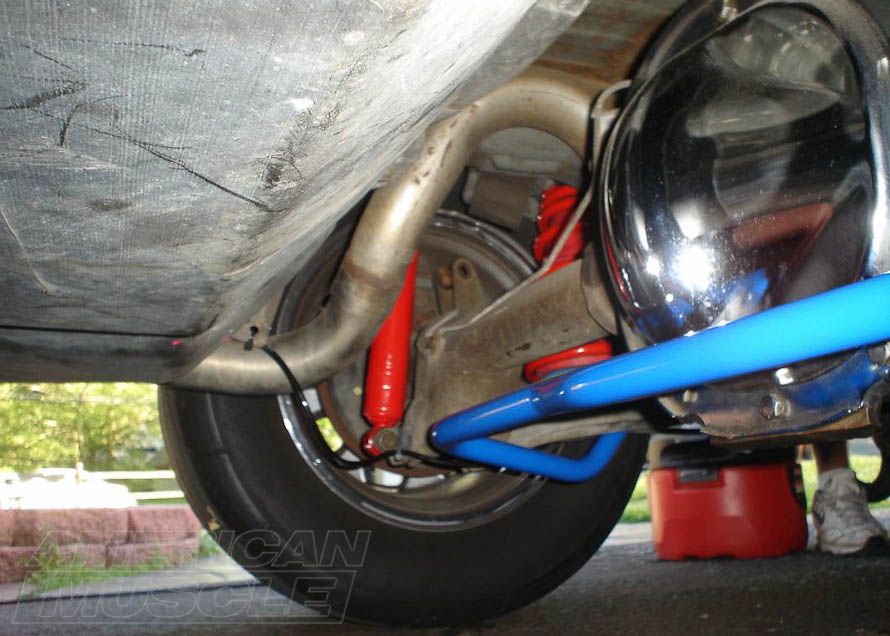 Street/Strip Shocks on a Foxbody

Setting up for Drag Racing

When setting a Mustang up properly for drag racing, you will need to focus on adding more anti-squat, shortening your instant center, eliminating body roll during launch, and improving weight transfer to the rear tires. All of these play a role in getting the car to launch harder and straighter with improved traction.

Anti-Squat/Instant Center: Anti-squat and instant center are values calculated by examining the way control arms interact with each other. A neutral line is drawn from the bottom of the rear tire to the top of the front tire and acts as a reference point. Then, a straight line would be drawn from your lower control arms and your upper control arm. Their intersection point is called the instant center and its position relative to the neutral line is the anti-squat percentage. The length of the instant center determines how quickly the car will rise. The shorter the IC, the quicker the car will rise. If the instant center is above the neutral line, the %AS is above 100%, and the rear suspension will rise during launch. If the %AS is below 100%, then the car will squat during launch. Many people believe squat is good when launching a car, but squat is a bad thing. It wastes energy that could be used to propel the car forward AND it causes the suspension to unload. When anti-squat causes the rear of the body to rise, it also forces the axle into the ground, increasing traction. If the anti-squat value causes the car to squat, then the axle will rise away from the ground, decreasing traction. 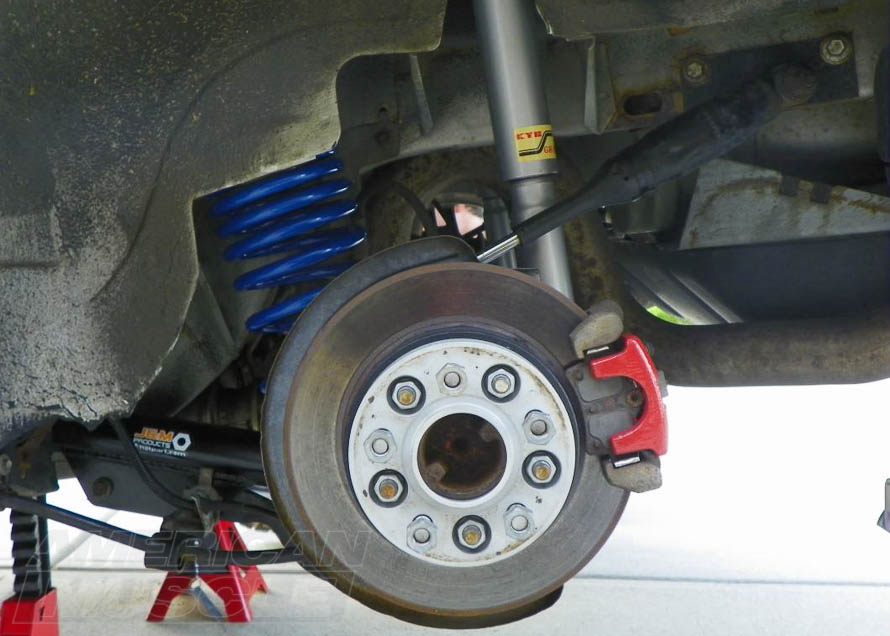 Rebound Valving: When you launch a car with lots of anti-squat the body will tend to separate from the axle. This is a good thing since it forces the axle into the pavement, but too much anti-squat with too short of an instant center can cause the suspension to unload. This is where aggressive rebound shock settings come into play. By increasing the amount of rebound on your shocks, you will slow the separation down and make it smoother. This will keep the rising body from pulling the axle up with it, unloading the suspension and killing traction. Too much rebound can be a bad thing though since it will prevent the body from separating as it needs to. Generally, as horsepower goes up, rebound will have to go up as well. Stick shift cars will also require more rebound than automatic cars.

Compression Valving: Compression valving is just as important as rebound valving. Once the car has been launched and the suspension starts to settle back down you want to make sure that it doesn’t come down too hard, otherwise the car will end up unloading the suspension. Increasing the compression valving on your rear shocks will allow the rear of the car to gently settle back down without shocking the rest of the suspension or causing the car to squat and lift the axle. Too much compression is a bad thing though as it can keep the rear end in the air for too long. 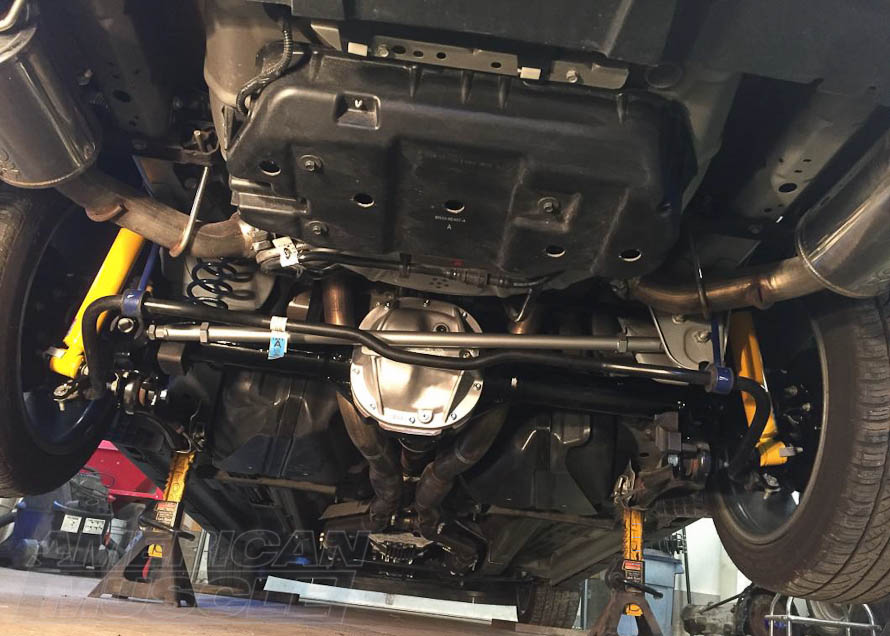 Controlling Body Roll: A lot of drag racers will remove their front sway bars for better weight transfer. By removing the front bar, you allow the front suspension to move independently, which helps with weight transfer. In doing this, you also allow the car to roll a lot more during launch, leaving one front tire on the ground while the other is in the air. In order to limit the amount of roll a car exhibits after removal of the front sway bar, drag racers will replace the rear sway bar with an anti-roll bar. The anti-roll bar has bar rates that can be greater than 30-40 times the rate of the stock rear bar. Having a rate this high will eliminate body roll and cause the car to come up evenly, pulling both front tires up and transferring weight evenly to the rear tires. 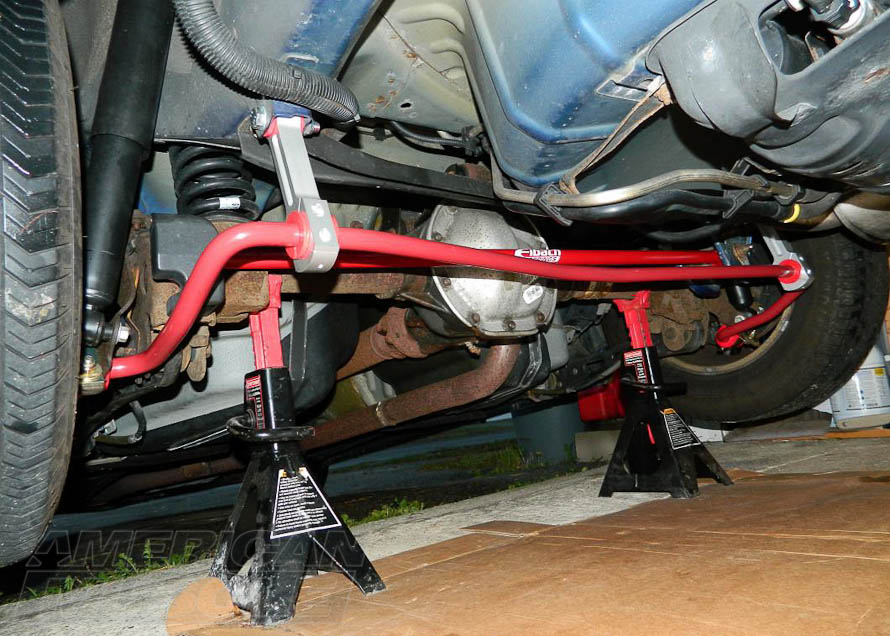 Getting Ready for the Road Course

A lot of the same principals from drag racing go into setting a car up for a road course. Upgrading control arms, springs, and adjustable dampers are going to be the foundation for your suspension. After the basics are done, it's time to focus on controlling body roll further, keeping the axle centered, and fine tuning the rest of the suspension.

Sway Bars: Sway bars should be one of the final suspension pieces that you buy for your Mustang because the rates you choose to run will depend on the spring rates. There are basically two schools of thought for sway bar and spring combos. You can either choose to run a soft spring rate and big sway bars with high rates to supplement the low spring rate OR you can run high spring rates with softer bar rates since the springs will be controlling most of the body roll. If you plan on driving your Mustang a lot on the street and want to maintain decent ride quality, it would likely be in your best interest to go with a soft spring/adjustable big bar set up. Adjustable bars mean that you can set a higher bar rate at the track and a softer one for the street, making this the most practical option for daily drivers. For a car that is more track oriented, stiff springs with small bars make for a better choice since you have greater control when fine tuning. 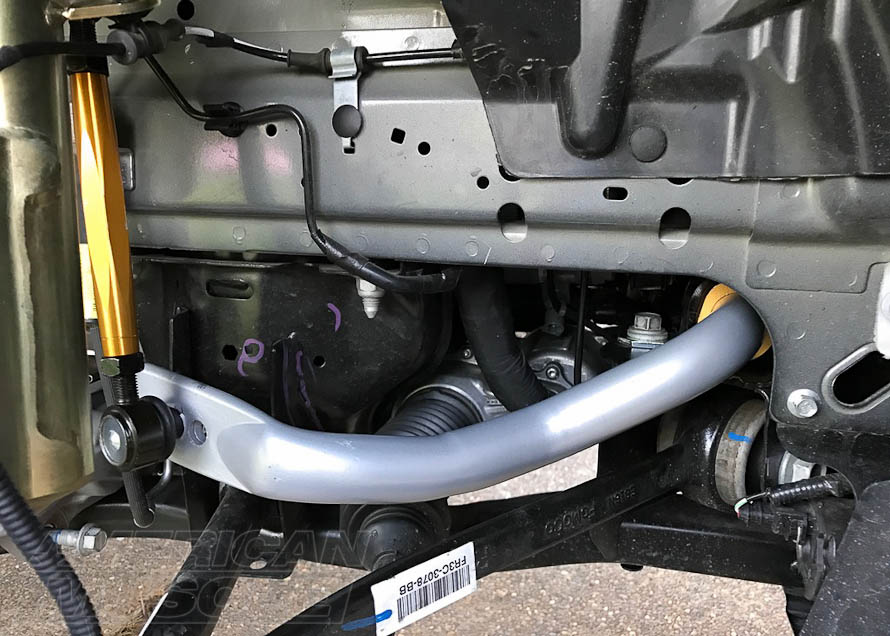 Watts Linkage vs. Panhard Bar: Keeping the rear axle centered underneath the car goes a long way towards increasing vehicle stability. A panhard bar is a fixed length bar that centers the rear axle. As the body of the car moves up and down, the fixed panhard moves in an arc, pushing or pulling the axle from one side to the other. The lateral movement caused by this is fairly small, but 200 pounds of axle swinging can have a dramatic effect on vehicle dynamics. The movement caused by the axle can make the car feel unstable over rough terrain, and make your Mustang less predictable. A Watts linkage essentially works as a self-adjusting panhard bar. Two linkage arms are attached to either your Mustang or it’s axle on one end, and a pivot on the other. As the body moves up and down, the pivot will swing from side to side, effectively lengthening or shortening the linkage arms, keeping the axle almost perfectly centered under the car. With the axle almost perfectly centered, the car will be more predictable, more stable, and will hug corners a lot better. 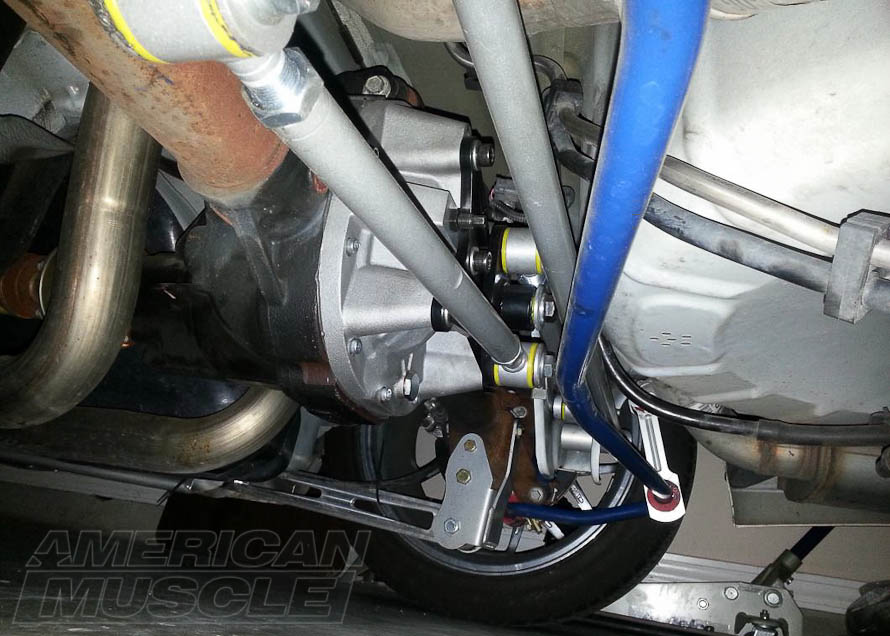 Getting your suspension set up properly takes a lot of work, trial, and error, but the end result is well worth it. With the proper suspension, you can bet that your Mustang will be hooking harder, cornering flatter, and crushing your competition! 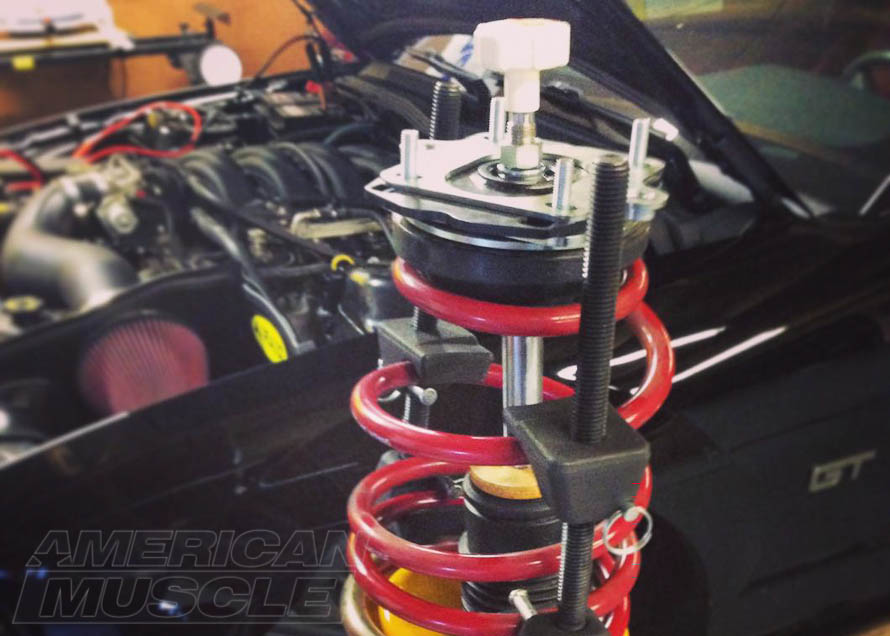