If you're looking to spice up your Mustang suspension, aftermarket control arms can give your Mustang a tighter feel. This guide will show you the benefits as well as the disadvantages to upgrading from stock control arms. 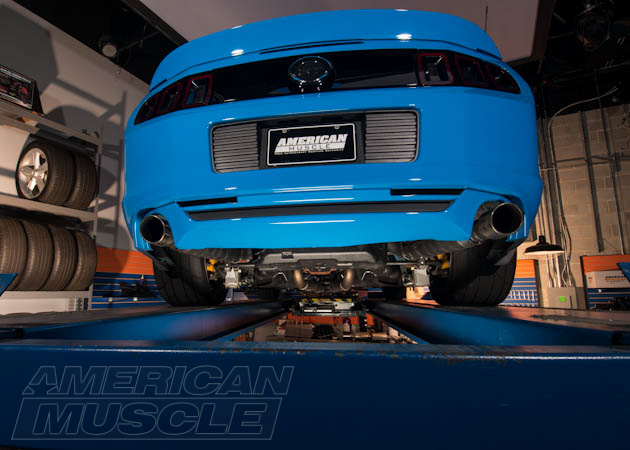 What are Mustang Control Arms?

The front arms eliminate any pinion angle deflection that can botch traction while the rear arms restrain the axle from moving forward and backward, like leaf springs on older model vehicles and trucks. Rear control arms bolt to the upper part of the differential housing and connect to the body. Their main purpose is to support the up and down movement of the axles. The lower control arms also transmit the force from the wheels to the chassis. Of course, control arms are much lighter, and more effective in preventing axle wrap than the traditional leaf spring set up.

Under normal driving conditions the factory arms are okay, but if you enjoy taking turns, occasionally hitting the track, or just want extra peace of mind on the road, upgrading your Mustang’s control arms is highly recommended. 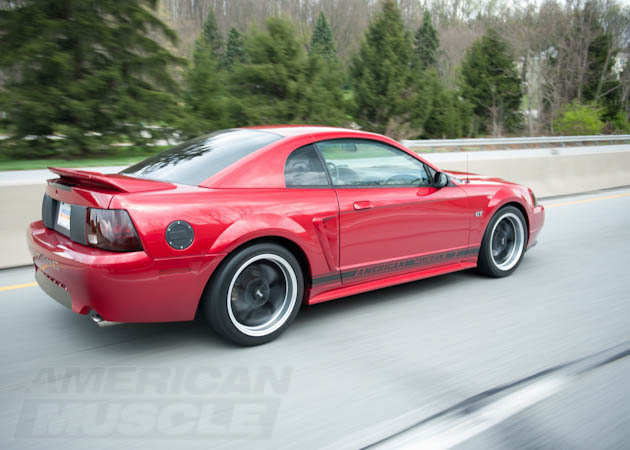 Axle wrapping is when torque and traction combine to twist the axle (pushing the nose of the differential up going forward or down going backward) into an "S" shape. The energy is stored in the spring until the tire slips, and the spring snaps back violently. Sometimes this results in a hopping sensation, hence the other common term, "axle hop." It can be very hard on driveshafts and u-joints.

Axle binding prevents your tires from achieving complete traction, but it can also cause snap over-steer. Snap over-steering occurs when the vehicle transfers weight during a turn and unexpectedly snaps in the opposite direction due to binding. It's extremely hard for a driver to correct, not to mention highly dangerous. 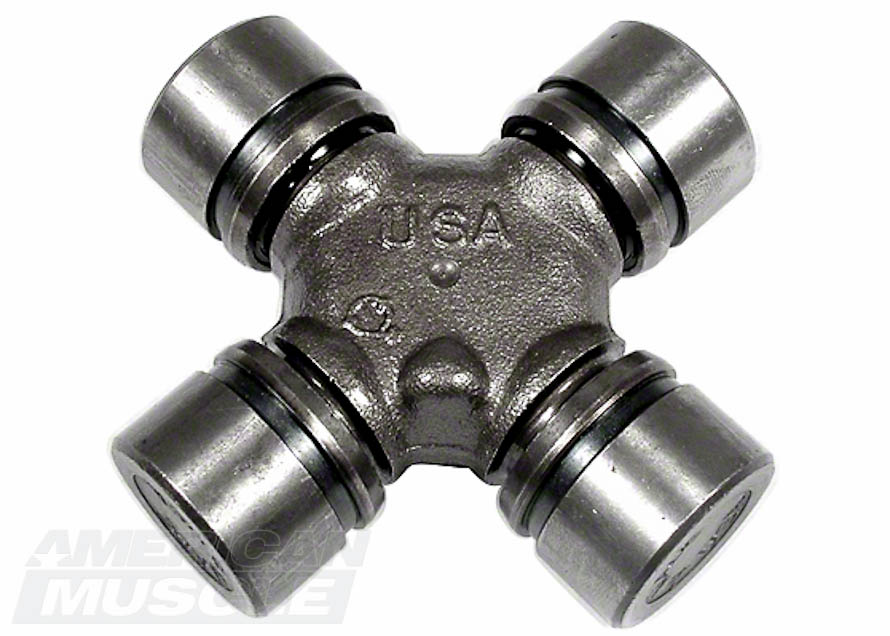 Although a significant improvement over leaf springs, control arms have some downfalls in stock form. Ford used a soft rubber bushing at the mounting points at the chassis and axle. Although a more comfortable riding experience for the average driver, rubber bushing have poor performance in terms of handling and traction.

Stock control arms were not designed to withstand hard launches and performance use, let alone the huge power upgrades many Mustang owners perform. Often constructed of U-shaped, stamped bent steel, they can flex under pressure such as accelerating from a stop. As one portion of the chassis moves upward another part can move downward, which occurs during higher speed turns (body roll). This design leaves a lot to be desired in the rigidity area, allowing for wheel hop off the line and side-to-side movement of the axle during aggressive turns—all of which less than desirable, but can be corrected. 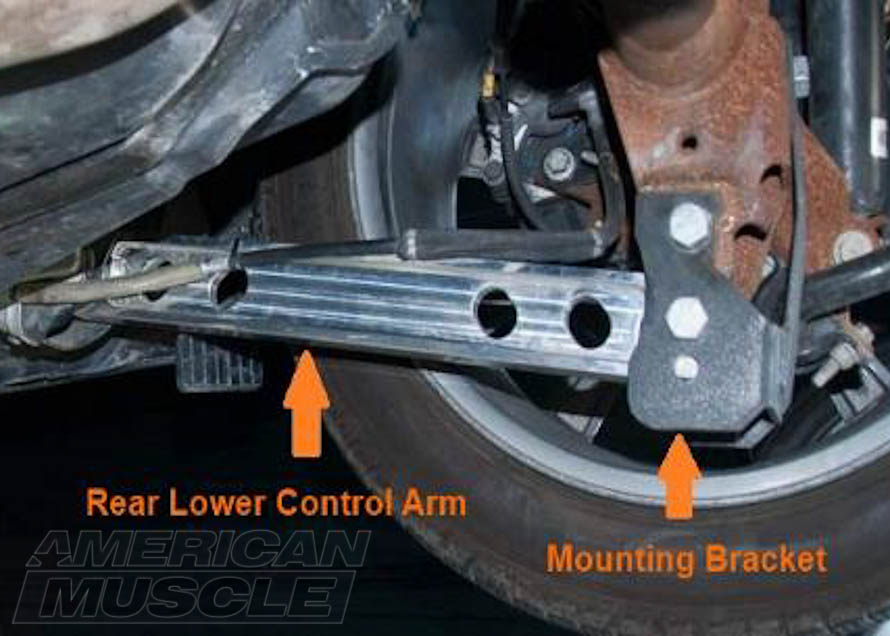 Many aftermarket options are high quality, tubular steel pieces with high-grade tig or mig welded seams, providing added rigidity and support. The tubular design is more rigid than the stock stamped steel piece and in most cases, lighter. If tracks days are every day for your Mustang consider tubular arms, but if your Mustang is a daily a boxed design will do just fine. Keep in mind S550 Mustangs use vertical links to keep the rear wheels planted instead of control arms.

The two most popular choices are adjustable and fixed control arms. Both can be used on a stock Mustang. However, if you’re lowered you’ll need the adjustable control arms to set the proper angle. Adjustable arms allow you to set your pinion angle in a matter of minutes, something we'll explore further down. In general, the front control arms get replaced on ponies that see more serious track duty. 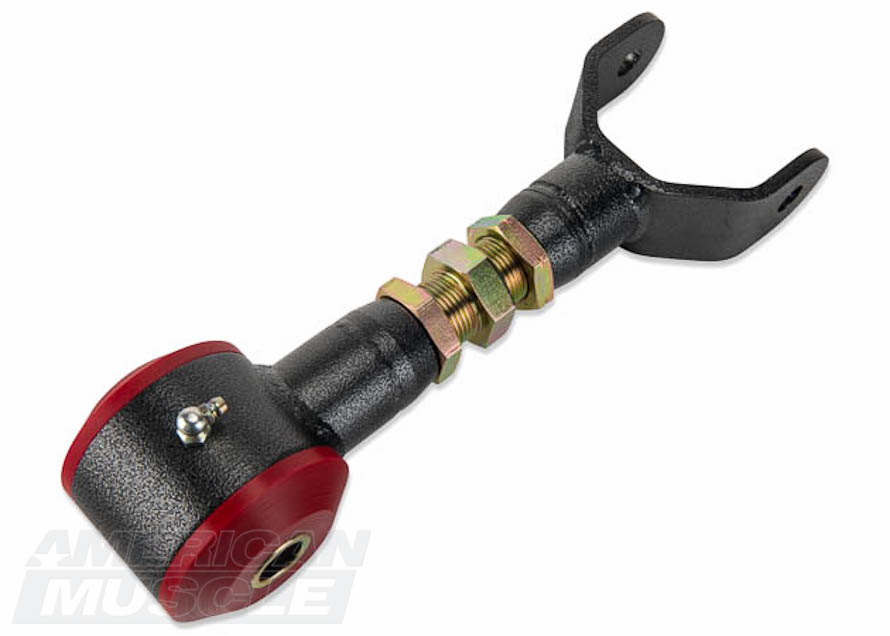 A lot of the kits available are offered with solid polyurethane or spherical end bushings (spherical bushings allow for slightly better handling). Both are a huge improvement over the soft rubber stock bushings. Rubber and poly-urethane bushings still allow the suspension to bind under harsh conditions (although to a lesser degree than stock), but they will add some comfort and predictability to your Mustang. 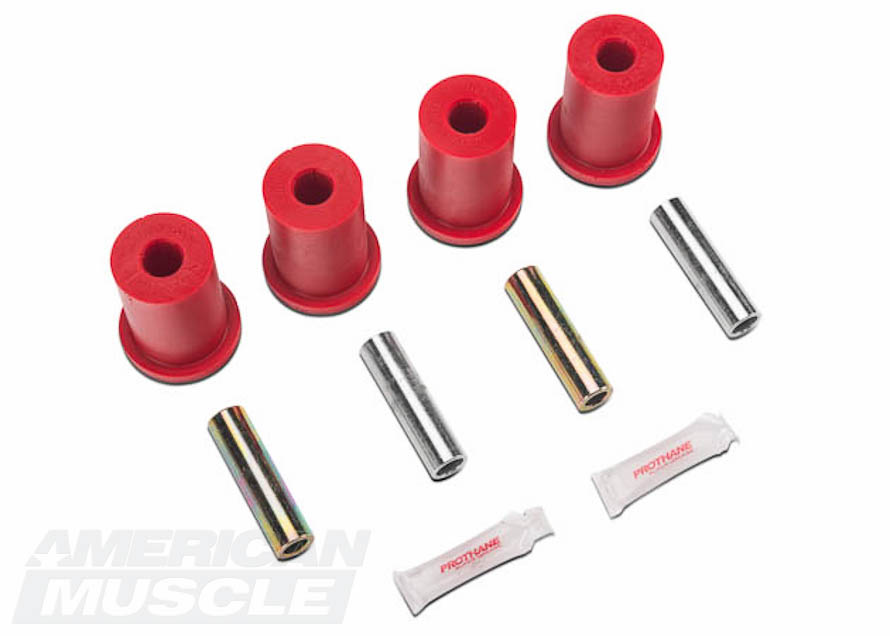 What are Spherical Ends?

Instead of using a big bushing, spherical ends (also referred to as Heim joints) use a small metal ball that pivots inside the joint. This allows the control arm to move multiple directions simultaneously. This style end also eliminates some axle binding. Spherical ends are recommended for getting the most out of a track build. All of these are adjustable as well.

There’s also the option of an adjustable spring perch. This adjusts the ride height in the rear of the car, either lowering up to one inch or raise it by two inches. With that much adjustment you can fine tune your suspension for perfect launches and taller tires for certain applications. 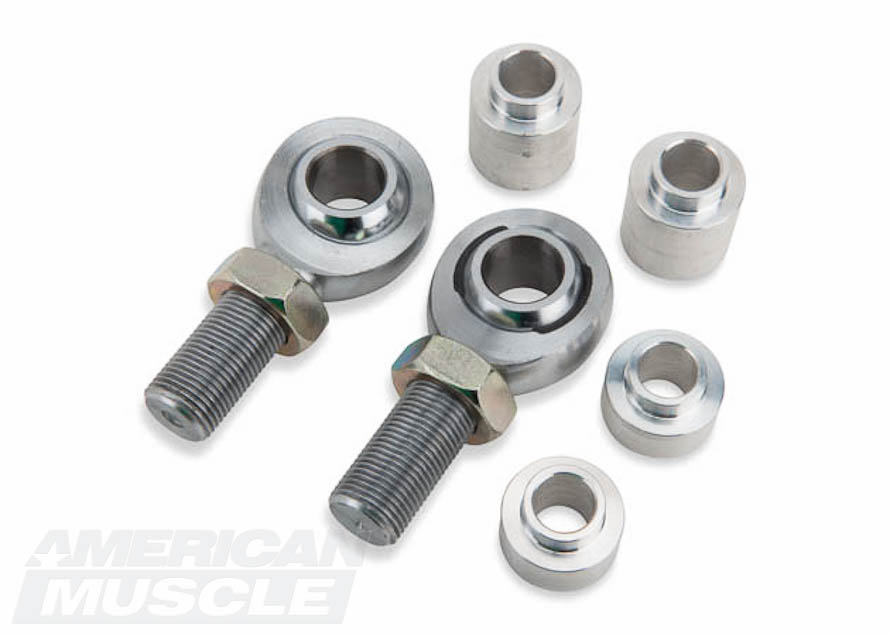 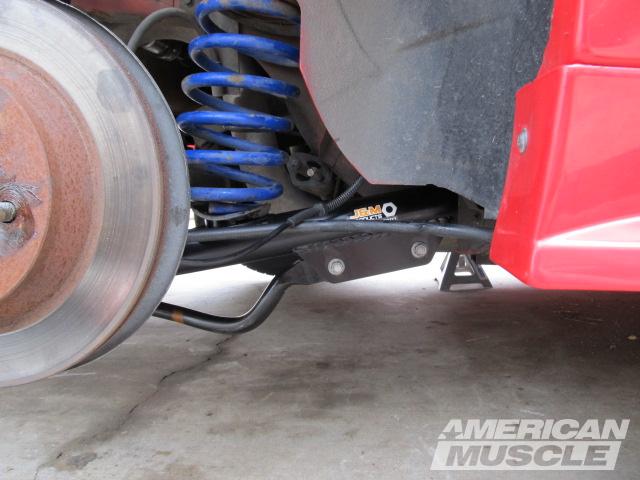 Benefits of Adjustable vs. Non-Adjustable Suspension

The pinion angle needs to be adjusted when lowered, not only for more traction but also to increase longevity by maintaining proper wear and tear on seals and the drivetrain as a whole. Without the proper geometry, you're looking at the potential of damaging your driveshaft's u-joints. 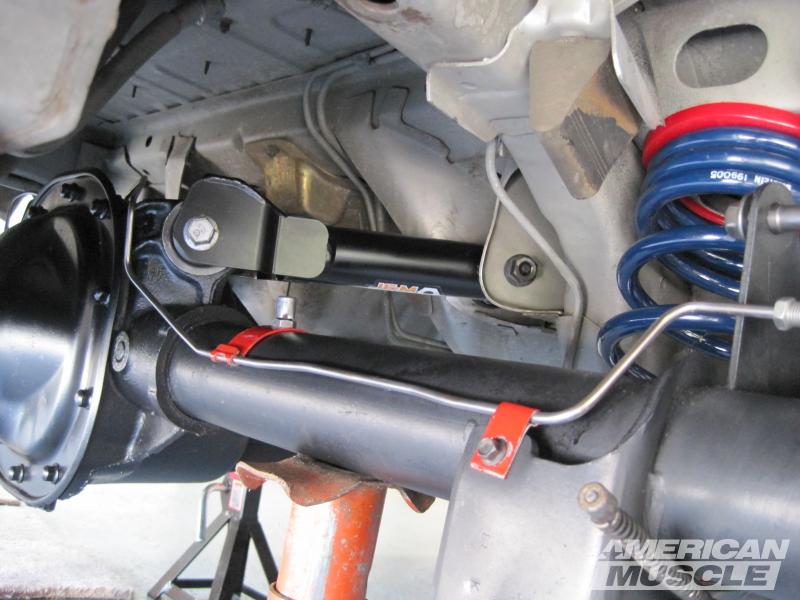 While increasing launching capability, there are a few downsides to be aware of. First, anything aftermarket isn’t free. Secondly, with a stiffer rear suspension you will feel some of those small road bumps and vibrations that normally go unnoticed.

Basic hand tools, a jack, jack stands, wheel chocks, and a torque wrench that can handle 150-200 ft-lbs will handle the job. One of the trickier areas is separating the ball joints from the knuckle (when doing the front arms). You'll either have to muscle them out with a prybar or rent a pickle fork from your local parts shop. Torqueing the bolts down to the necessary specs can also be a pain considering how much torque is required. Assuming you have access to all the right tools and have the mechanical understanding, expect control arms to take you a few hours. Something to consider for lower arms is changing any part that affects the spring can be extremely dangerous if it is not done properly. 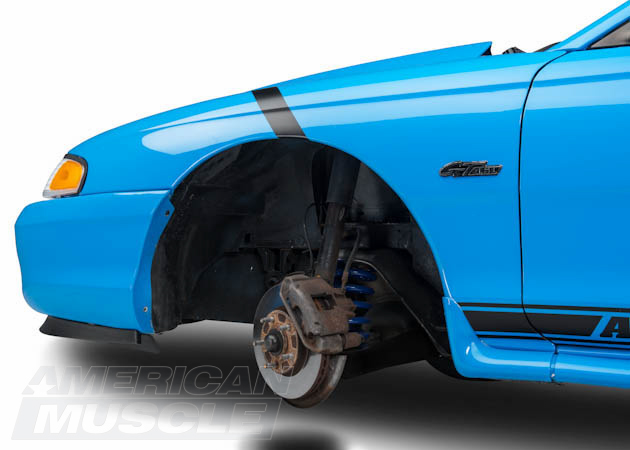 What Do Mustang Ball Joints Do?

Ball joints eliminate the sloppy steering feel Mustangs can sometimes suffer from. When ball joints get worn out, they clunk and squeak when going through a turn while feeling incredibly loose. A great time to upgrade them is when the stock ones wear out, giving you not only revitalized steering and handling, but overall improved performance.

To get the most out of your Mustang’s suspension, go a step above a new set of control arms. A panhard bar or a watts link are two designs that address many of the problems associated with a 4-link suspension. Panhard bars didn’t come standard on Mustangs until 2005 but were introduced to combat many of the issues owners complained about in previous model years.

2005+ Mustang Note: When lowering your Mustang, the three-link suspension can negatively affect the pinion angle. An incorrect pinion angle can cause undesired stress on the universal joints, excessive drivetrain noise or vibration, or even possible contact between the underside of the car and the rear axle. Upper control arms combat this. 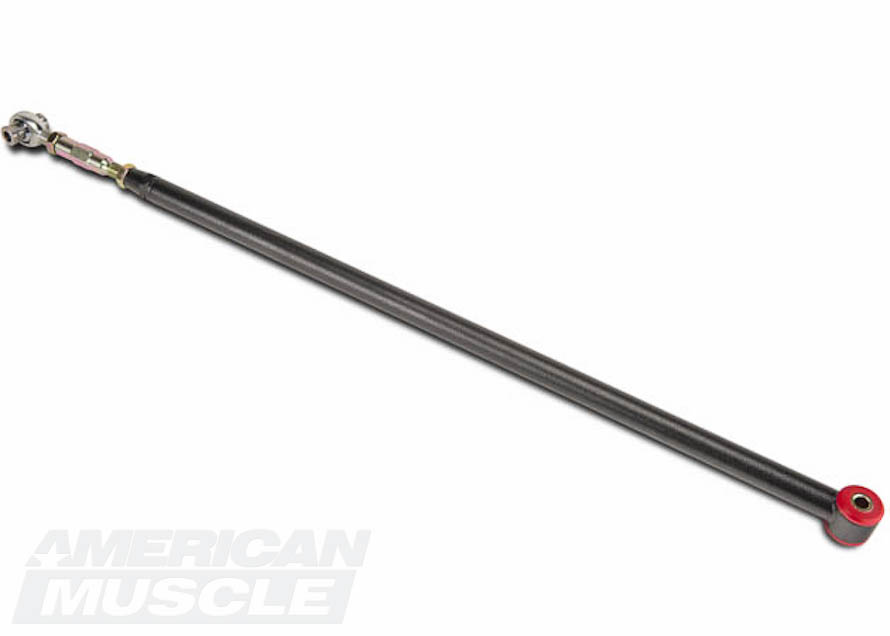