What Gear Ratio is Right for My Mustang?

Your rear gears dictate at what speed you top out and how fast you take off from a light. The right ratio can round out your highway cruiser or top dragster builds.

One of the most common pieces of Mustang advice is to sway the gear ratio (axle ratio) in the differential. This is pretty sound advice as a gear swap truly is one of the best ‘bang-per-buck’ improvements you can do. Unfortunately, what gear ratio you should go with isn’t always so clear. 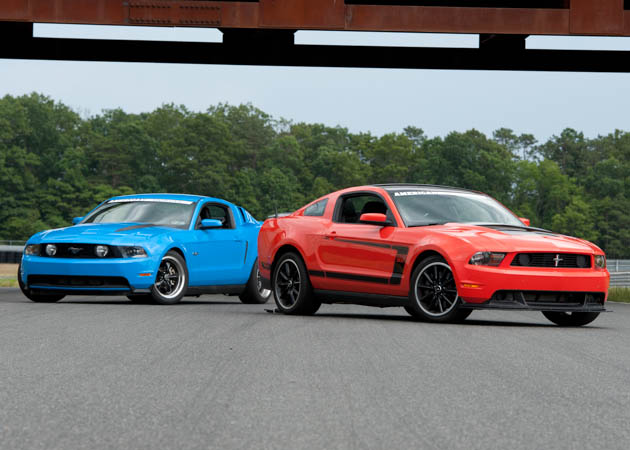 Why Change my Gears?

Swapping the rear end gear is a classic hotrod mod. By changing the axle ratio, vehicle acceleration can be increased or decreased or, top end speed can be increased or decreased. There is an inverse relationship between acceleration and top speed. If you want more acceleration, top speed will be sacrificed. If a higher speed limit is desired, than acceleration will take a bit of a hit. The stock axle ratio in a Mustang can vary anywhere from 2.73:1 to 3.73:1, depending on year, model and additional options selected when the vehicle was originally built/purchased.

Typically, owners change the gear to a steeper one, such that the car accelerates harder off the line. A gear change does not increase the engine’s output but instead manipulates it across the power band. In a nutshell, if you’re looking to be pushed back further into your seat when you stomp the ‘Go’ pedal, a gear change will do exactly that. 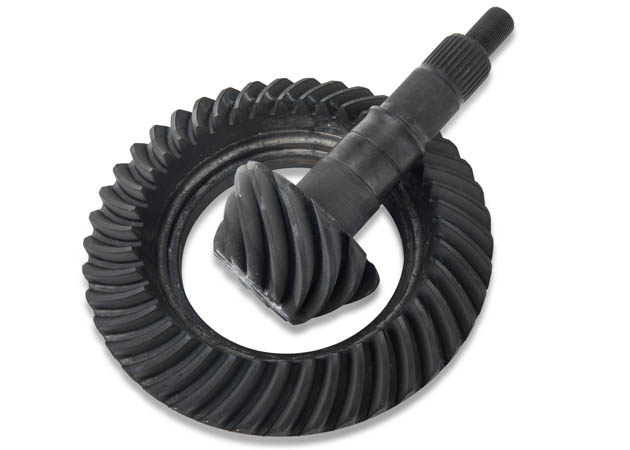 What is the Right Ratio?

This is the million dollar question, and there isn’t one answer for everyone. To pick a gear, you need to know what ratio you currently have, and where you want to be. As mentioned above, Mustangs came with anything from a 2.73:1 to 3.73:1 ratio. If you are unsure of your ratio, you can call the dealer with the VIN, check the glovebox for production codes, or look at the differential itself (there should be a small tag attached to it). Once you know the ratio, decide in which direction you want to go. Do you want more acceleration, and easier burnouts? If you answered yes, then you want a lower gear, which will be numerically higher. If you prefer a higher top speed, then you need to go with a higher gear (which is numerically lower). You want both acceleration and top speed? Sorry, it doesn’t work like that. A gear change gives you one or the other not both! 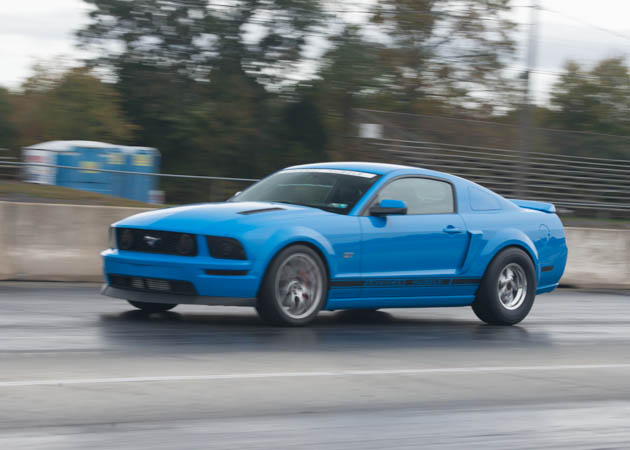 Scenario 1: Our Mustang currently has a 3.31:1 axle ratio, and say at 3300 engine RPM the wheels are turning at 1000 RPM and the speedometer reads 40 MPH. I want some more acceleration off the line. Ergo, I need a numerically higher ratio. I pick a 3.73:1. To turn the wheels at 1000 RPM, it now takes 3700 RPM from the engine to maintain the same 40 MPH speed. The engine is revving higher for the same speed, and thus our top speed is reduced because we are now closer to redline for the same speed as before. Acceleration is increased because the engine now enters the power band sooner.

Scenerio 2: our same Mustang, with a 3.31:1 gear in it, at 3300 engine RPM has a wheel rotation of 1000 RPM, and a ground speed of 40 MPH. I want more top end – I need a numerically lower gear. This time, I pick a 3.08:1. With this gear, the engine will now turn at 3080 RPM to spin the wheels 1000 times per minute, which gives a ground speed of 40 MPH. In this instance, the engine is revving lower for the same speed, and therefore has more RPM left until redline to increase wheel speed. 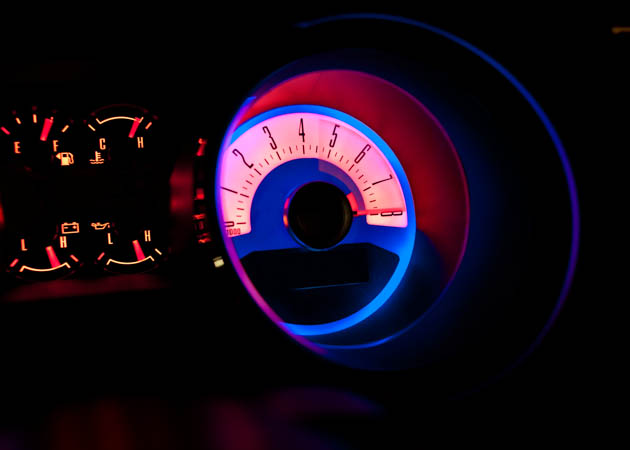 Remember, the ratio is input to output. The more revolutions the motor does per wheel revolution, the greater the acceleration, but lower the speed before the engine hits redline. Generally speaking, most people fall into the category of scenario one – owners are looking for more acceleration and seat-of-the-pants fell.

Moving past those simplified examples, there is still one other factor we need to take into consideration. So far, we have to know what our current ratio is and how do we want to improve the car; acceleration or speed. The next contributing factor is transmission type. 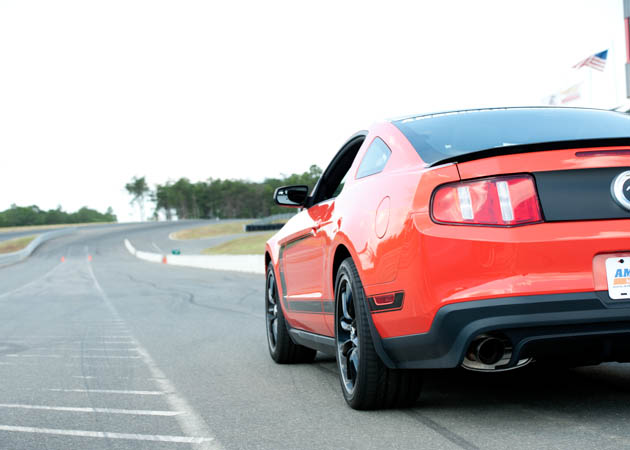 For manual transmission Mustangs, a 3.73:1 is typically the gold standard. There isn’t a particularly scientific reason behind this but rather, there is a huge amount of real world experience that says 3.73’s work great with manual ‘Stangs (aka, many satisfied owners). They offer great performance around town and off the line. The majority of Mustangs come with a ratio of 2.73-3.31 from the factory. 3.73’s are available from the factory depending on package options. If you have such an equipped Mustang and still feel that 3.73’s are not enough, the next jump is up to 4.10’s. However, 4.10:1 is a real steep gear. For street use, I personally wouldn’t recommend it with a manual transmission. A 3.55:1 gear is another solid choice for 5/6-speeds. In terms of performance versus RPM, there isn’t a huge difference between 3.55’s and 3.73’s, therefore the majority of people simply go 3.73:1. 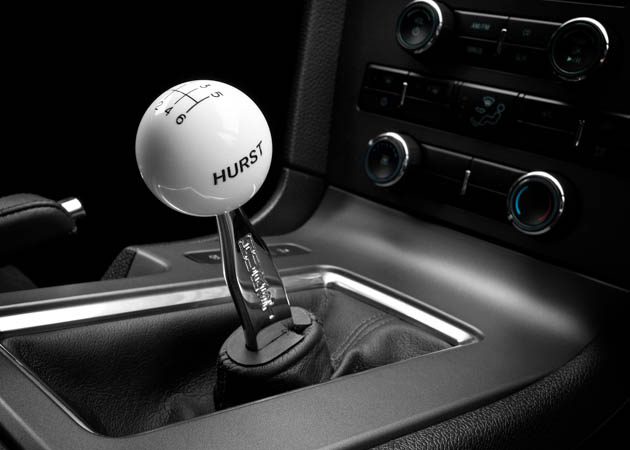 Auto Mustangs like a little more gear than their manual brethren. The reason for this is auto transmissions typically have lower gears and with the converter, need a little more differential gear to get up and running. Again, no special laboratory results behind this one, just real world satisfaction. The gold standard for automatic Mustangs is an axle ratio of 4.10:1. This extra bit of gear makes up for the lower first gear of the transmission and the slip of the converter. This is for street and strip use. A more race oriented car might even go higher up to 4.56:1, but for the most part, 4.10’s are the best choice for street driven auto Mustangs.

There is one last area to address – forced induction. A turbocharged or supercharged Mustang will change the gear game quite a bit. As mentioned, owners typically go for a steeper gear than factory, because they want the car to pull harder. When you introduce forced induction into the equation however, the landscape changes vastly. A super or turbocharged motor can use less gear, because the forced induction adds such crazy amounts of power across the band that the help of a steeper gear is not needed. Forced induction is a great way to get killer performance off the line and great top end speed. (Yes, you can get the best of both worlds... despite me not saying so earlier). Mind you, it is the most costly. Anyway, just for reference, most forced induction street Mustangs run between a 3.08:1 and a 3.27:1 axle gear. There is enough power out of the hole and across the band that leaving the line nor high speed running is a problem. 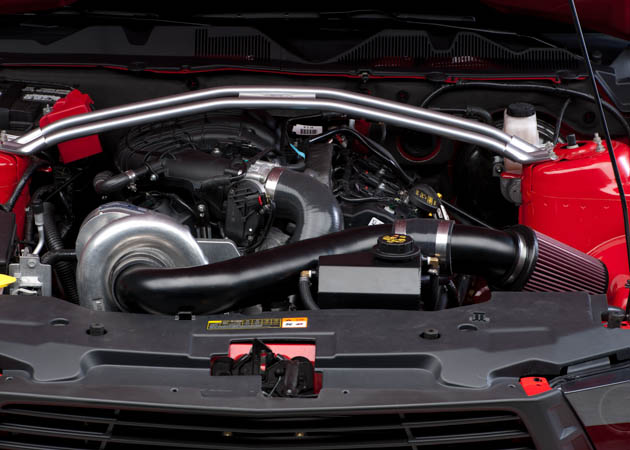 How do My Aftermarket Rims Affect Gear Ratios?