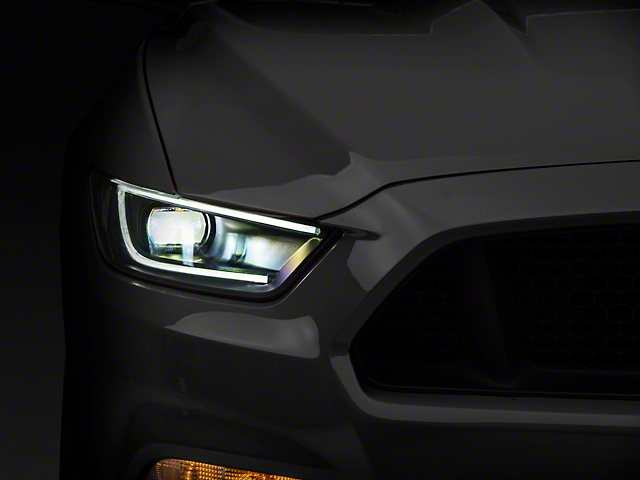 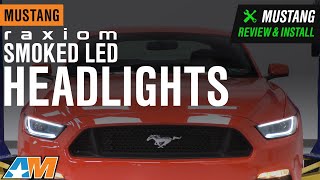 Intimidating Appearance. A set of Raxiom Smoked Headlights that feature LED accents that outline the housing are a great way to add an intimidating appearance to your 2015-2017 Mustang. These Headlights not only give your Pony a more menacing look, but they will also improve your visibility with their LED projector design. Featuring a 6000K cool white color temperature, Raxiom's Smoked LED Projector Headlights will certainly out shine your factory installed headlights.

Superior LED Illumination. For better nighttime visibility, Raxiom engineered their Headlights with a projector lens design that will illuminate the road ahead with a bright focused beam of light. These Headlights feature super bright LEDs that utilize a dual beam design with both the high and low beams in one convenient LED bulb. With an average life span of up to 100,000-hours, these LED Lights will last years longer than any conventional incandescent bulbs.

Quality Construction. Raxiom Headlights are manufactured from high quality materials to precise standards for lasting quality. These Projector Headlights feature durable black plastic housings with smoked lenses and modern LED accent lighting. Each light is weather-sealed to prevent dirt and moisture from harming the state of the art electronics.

Plug and Play Installation. Raxiom designed their Projector LED Headlights to be a direct plug and play replacement for your Mustang's original factory housings. It should be noted that you will need to remove the front fascia in order to gain access to the mounting bolts.

Application. This pair of Raxiom Smoked LED Projector Headlights are specifically designed for use on all 2015-2017 Mustangs, as well as the 2018-2020 Shelby GT350 and GT500 model. Driver and passenger side lights are included.