Everything About the 2005-2009 Mustang Submodels

The Mustang boasts a wonderful history for both style and performance, and modding the engine for higher horsepower numbers has been a staple throughout the years. You can also further improve on the engine's capabilities by checking out our wide selection of engine parts, such as cold air intakes and throttle bodies.

Codenamed the S197, the fifth-generation Mustang arrived in dealerships for the 2005 model year and continued through 2014, notably receiving a facelift in 2010. The new S197 replaced the outgoing SN95 and New Edge models, equipped with more horsepower, a revised chassis, and available in some seriously impressive submodels. Below we dive into the need-to-know details of the 2005 to 2009 Mustangs and its submodels. Read on! 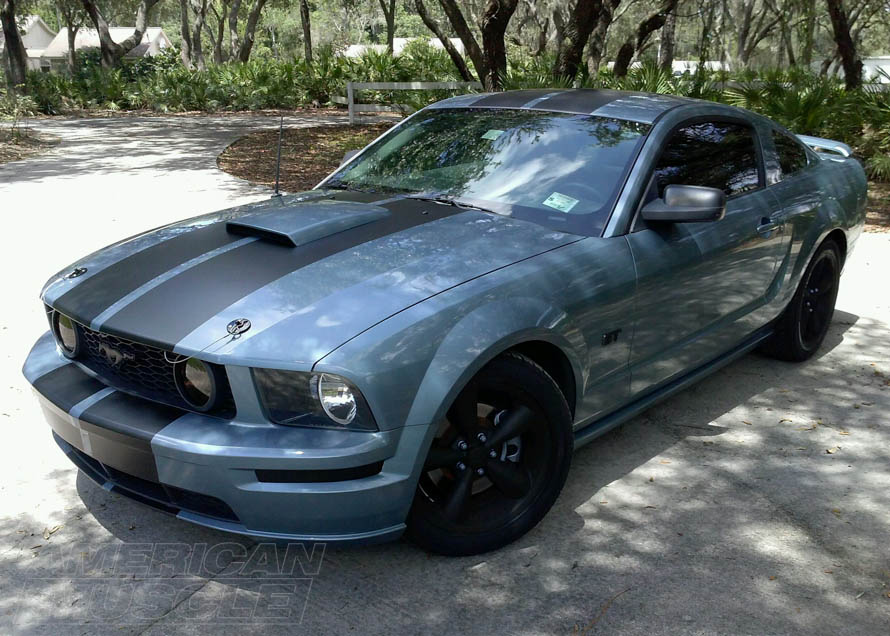 What Changed for the Fifth-Generation Mustang?

After a long 25-year long stint, Ford finally said goodbye to the Fox platform as a basis for the Mustang. Instead, the 2005 was built upon an all-new platform codenamed D2C.

The front end still consisted of MacPherson strut suspension, but with reverse “L” lower control arms. Out back, the rear suspension was a three-link system with a panhard rod controlling the lateral and vertical movements of the axle, meaning it’s a live rear axle.

Ford faced harsh criticism for this decision because the negative handling characteristics that come with a live rear axle, but quickly stated utilizing an independent rear suspension system would bump up the cost of the Mustang considerably—as much as $5,000.

Replacing the unimpressive 3.8L V6 powerplant from the New Edge line was a 4.0L Cologne V6, which produced 210 HP. The braking components were also changed to help slow the Mustang’s newfound speed. Larger 11.4” discs were fitted to the front end and clamped on by twin-piston calipers.

The S197 also took on a completely new look inside and out. Ford engineers based its exterior looks off of the 1964-1970 Mustangs, meaning they ditched narrow, sharp edges for a wider and smooth-shaped body.

The front bumper took on a radically-changed design and came equipped with mesh-style grille and pony emblem. Inside, the Mustang received a much more modern-looking cockpit than the outgoing New Edge, but came with a retro-styled steering wheel for a promising blend of classic and modern.

The heart of the S197 Ford Mustang GT was a 4.6L 3-valve SOHC Modular V8, which pumped out 300 HP. Unique to the GT was a limited-slip differential with the same carbon fiber clutch plates used in the previous SVT Cobra and GT500 of 2007.

The chassis received stiffer, better handling suspension, and large 12.4” front brake discs with four-channel ABS with traction control as a standard. Wheel size was set at 17”, but optional 18” wheels were also available. Finally, the GT featured a two-piece driveshaft and grille-mounted fog lights.

The GT California Special was commonly paired with Ford’s Appearance Package, which included a hood scoop and cover.

Things were different back in 1966. Back then, it was possible to stroll into a Hertz Rental Car office and pull off the lot in a Shelby GT350H “Rent-a-Racer”. To commemorate the old days, Ford teamed up with Shelby and Hertz again in 2006 to build the Shelby GT-H.

The GT-H was largely based around the regular Mustang GT, but dressed up in a black-and-gold livery mimicking the late GT350H of 1966 and outfitted with a variety of performance parts to give it a little more pep.

The GT’s 4.6L V8 was outfitted with a modified cold-air intake, X-pipe, and muffler set, giving it an additional 25 horsepower. The handling performance was also boosted with a set of specially-tuned shocks, lowering springs, thicker sway bars, and a strut tower brace.

Only 500 GT-Hs were produced. Each went Hertz agencies as part of their “Fun Collection.”

Back by popular demand in 2008 and 2009 was the Mustang Bullitt, which shows its respect to the 1968 movie Bullitt starring American hero Steve McQueen. To stay true to the styling featured in the classic film, the S197 Bullitt had its badging, spoiler, and scoops eliminated and was only available in Dark Highland Green and Black. Other details like 18” wheels, an aluminum shift knob, Bullitt-specific interior, and a faux gas cap on the trunk completed the look.

It wasn’t just an appearance package, however, with Ford throwing more than a few performance parts at the Bullitt. The throwback model was powered by a modified version of the GT’s 4.6L V8. 15 extra horsepower was added through a revised cold air intake, improved engine calibration, and a specially-tuned dual exhaust used to mimic the tone of the Mustang used in the film. Stiffer springs, struts, and a front strut tower brace were used to improve handling.

The raw heart of the Shelby GT500—a supercharged 5.4L 32-valve DOHC V8—steals the show. Its beefy powerplant was equipped with an iron block, aluminum cylinder heads, and paired with a burly Tremec TR-6060 six-speed manual transmission.

The result? A pony that could comfortably lay down 500 HP and 400 lbs-foot of torque on any given day. Aside from extra reinforcement to handle the high horsepower, the GT500 also sports Brembo four-piston front brake calipers clamping to 14” discs, 18” wheels, exclusive front and rear bumpers, reshaped headlights, and a heat-extracting hood.

Oh, and don’t forget about the GT500KR. More powerful? Oh yes. Standing for “King of the Road”, the KR model pays homage to the 1968 Shelby Mustang with the same name and surely does not disappoint its ancestor.

From the standard GT500, engineers extracted another 40 horsepower out of the KR model through a revised exhaust system, updated ignition and air/fuel calibration, and a cold-air intake perfectly fitted to its carbon fiber hood. The KR also received a Ford Racing strut tower brace as well as tuned struts, shocks, and springs to handle its behemoth of an engine.

Retro Styling with Rear Window Louvers: Reminiscent of the 1960s and 1970s Mustang styling cues? Add some of that classic look to your modern-day Stang with a set of rear window louvers.

Typically offered in both plastic and aluminum, louvers can bring back that timeless styling while helping keep the temperature of your car’s interior under control.

Launching your Mustang. It’s All About Gearing: Need to get off the line quicker? Swapping out the rear gears on your Mustang can make all the difference.

Typically, road racers tend to swap their gears for a 3.73:1 ratio, which allows them to get off the corner quickly but still reach a high top speed.

Hitting the strip? You’ll probably find that a 4.10:1 ratio will work better as it will improve the acceleration of your Mustang from a stop. These are just a few aftermarket gearing options.

Wanting to tinker with your ‘Stang’s suspension? There are a few options out there depending on your desires and budget.

Coil-over kits are incredibly popular in the Mustang community due to their relatively low price point and beneficial results. These kits allow you to easily adjust ride height while reducing body roll and nose diving as well as improving general chassis response.

Also popular is an Air Lift system, but they do come at a much steeper cost. These are highly adjustable in the ride height, compression damping, and rebound damping departments, meaning they will work well for almost any type of driving.

To help decide what suspension upgrade will work best for you, check out this guide.

Fitting an Exhaust to Your Mustang

Okay, this one is probably obvious, but upgrading the exhaust system on your Mustang is quick, easy and probably much less expensive than other options out there to extract some extra horsepower.

Shorty headers, long tubes, mid pipes, cat-backs, axle-backs… What does all this mean? We’ve covered it in a previous guide, which will help you choose the right exhaust for you.