Fox Body Aluminum Driveshafts - Are They Worth it?

An aluminum driveshaft will let you rev faster and can reduce vibration. Although you will not technically gain any horsepower from a new driveshaft, you will considerably reduce drag from the heavier stock driveshaft, resulting in faster track times and a smoother ride.

A question that frequently pops up around Mustang Fox Body related websites is one regarding aftermarket driveshafts – mainly, why upgrade and is it worth it? In order to answer this, let us first examine the factory driveshaft and related components. 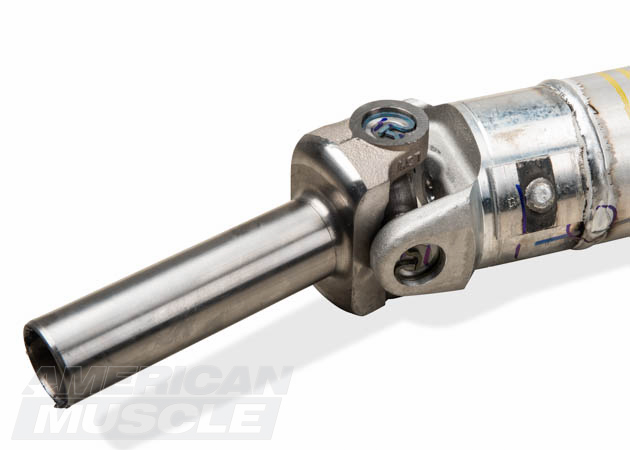 Dependent on vehicle year, Mustangs came equipped with varying driveshaft dimensions. Early model Foxbody Mustangs (1979-1983 ½) had a diameter of 2.75 inches and a length ranging between 45.51 inches and 46.25 inches. The later models, starting halfway through 1983, were equipped with a beefier 3 inch diameter driveshaft with an average length of 45.49 inches. All were made of straight steel tube, had a wall thickness of 0.065 inches and came factory balanced and dampened (generally with a cardboard lining) to reduce noise and vibration when under way. Under normal circumstances, the factory driveshaft is more than adequate to handle a stock 5.0 (rated at 225 HP, 300 ft-lbs) and in fact, can go a long ways more in terms of power before breaking. So, knowing this, why consider an aftermarket shaft? 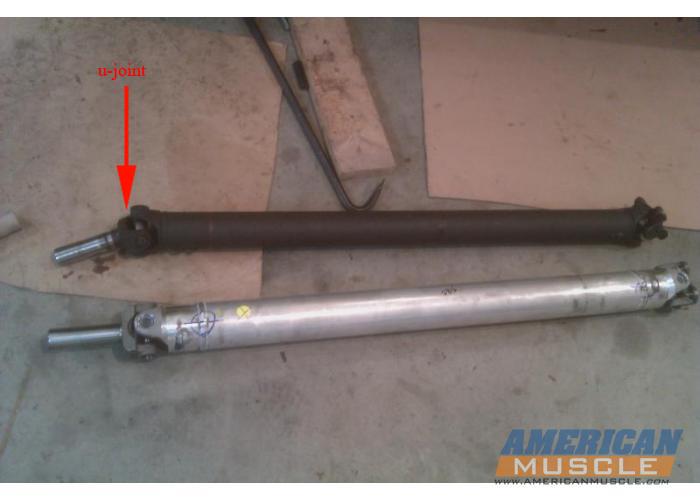 Why You Should Pick Out an Aftermarket Driveshaft

There are a few reasons. First of all any aftermarket driveshaft will either be made of aluminum or carbon fiber, the most common (and financially achievable) being aluminum. The stock steel driveshaft weighs approximately 20 pounds, whereas a Ford Racing aluminum variant tips the scales at around 13.5 pounds for a savings of 6.5 lbs. On the surface that doesn’t seem like much. However, because the driveshaft is a rotating mass, a lighter driveshaft results in less rotating mass and thus allows for slightly greater acceleration.

Secondly, aluminum does a better job at vibration dampening, thus allowing for a smoother ride at all speeds, but particularly so at higher speeds. Furthermore, an aftermarket aluminum driveshaft is not only stronger than their steel counterpart, but stiffer too, meaning more efficient transfer of power to the wheels. To summarize:

Now, carbon fiber driveshafts were mentioned, too. They offer all the same advantages as an aluminum driveshaft, but to an even greater extent. An aftermarket carbon fibre driveshaft is lighter, stronger and stiffer than aluminum, but also more costly! 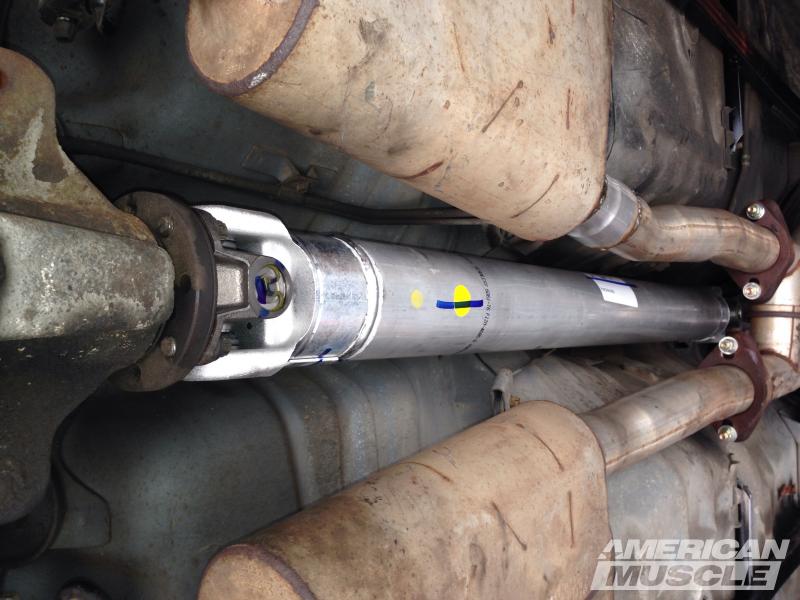 If you are contemplating swapping driveshafts for a lighter, stronger aftermarket variety, there are a couple of other components you should consider too. First and foremost are the universal joints. Universal joints, an integral component in the drivetrain, are often overlooked. The universal joints, commonly referred to simply as u-joints, are a special joint attached to each end of the driveshaft to allow for a change in angles (say as a the car rides over a speed bump) without interruption of power transfer. It is a good idea to periodically check the condition of the u-joints, as a worn u-joint will cause vibration and unnecessary noise. If they have play in them, they should be replaced.

A second component to examine is a driveshaft loop. Essentially it is a simple device that is added to the underside of the vehicle that will contain the driveshaft in the event of a u-joint or driveshaft failure. This way nothing is shot out from underneath, smacks against the undercarriage, or worse yet the road (imagine a broken driveshaft impaling the road. Cars have flipped because of this). It is cheap insurance for those Foxes that see a lot of track time. In fact, many tracks mandate the use of a safety loop if running a certain ET, making a certain amount of horsepower, or even just using a certain type of tire! 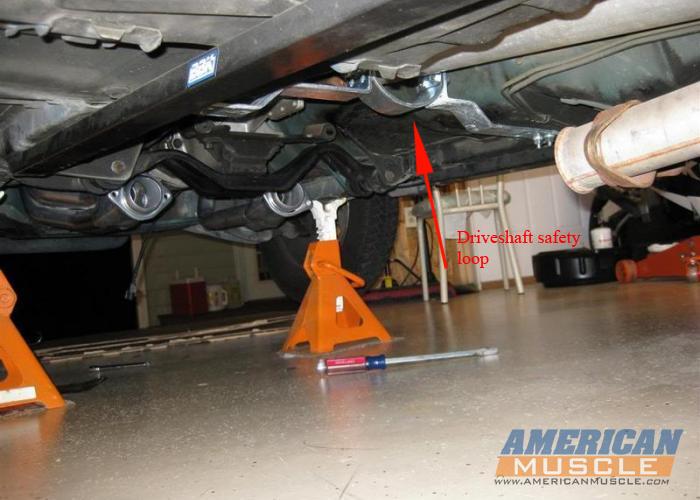 If you decide that an aftermarket driveshaft is to your taste, when it comes to install, you are in luck! It is an easy do-it-yourself job and depending on your capability, can (and has) easily been done in hour. The only specialty tool you will need to remove the driveshaft is a 12-point socket, as the driveshaft is secured to the differential flange via 4 special 12mm, 12-point bolts. Regarding u-joint replacement, they are a bit trickier. It can be done at home with sockets and a bench vice, but the job is much easier with u-joint specific tools. For this reason, it is recommended to take it to a shop.

Request your Free vehicle Catalog in under a minute