Everything About the 2010-2014 Mustang Submodels

This modern muscle car has improved with each iteration. For a more personalized look, exterior styling parts would give your 2010-2014 Mustang that aesthetic edge to set you apart from other Mustang owners. We have a wide selection of exterior add-ons such as spoilers, grilles, and many more.

Only five years after the introduction of the S197 Mustang, Ford unveiled an updated model with a restyled exterior, new engine options, and a whole host of additional features. Being built upon the D2C platform, it is still considered a fifth-generation Mustang, but with improvements needed to compete in the new decade. The guide below covers all the need-to-know details, specs, and sub models of the 2010-2014 Mustang. 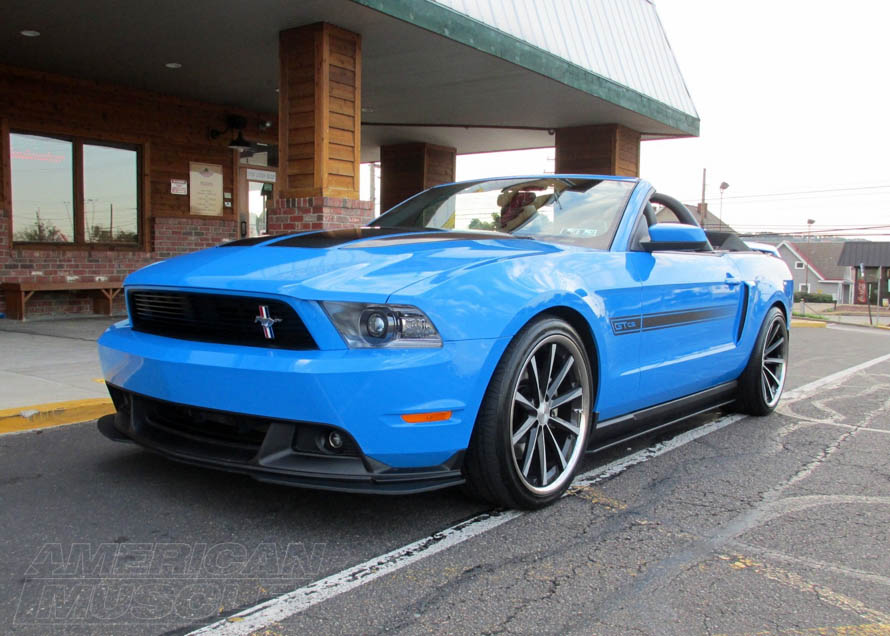 The new Mustang unveiled for the 2010 model year was anything but a complete redesign. In fact, it still shared the same D2C platform as the ’05-’09 model, came equipped with the same 4.0L Cologne V6 engine, and was offered with identical transmissions as the previous year. What did change? Really, it was mostly body styling.

The ‘Stang received a “power dome” hood, smaller side mirrors, a new headlight design with integrated turn signals, smaller fog lights, updated three-lens tail lights, and a restyled Mustang emblem. The radio antenna was also pushed to the rear of the car and the interior used higher-quality thermoplastic olefin materials than previous years.

These changes don’t sound like much, but they did result in a 4% lower drag coefficient (7% on the GT models) and 37% less aerodynamic lift (23% on the GT), which boosted fuel efficiency. The new Mustang also featured new spring rates and dampers as well as Ford’s AdvanceTrac traction and stability control as standard equipment in 2010.

17” wheels were also equipped (with 18” wheels being optional) and features like Ford SYNC, backup cameras, an updated navigation system, a cap-less fuel filler and offered as optional equipment.

In 2011, Ford ditched the Cologne V6 engine base model engine, replacing it with a new 3.7L Duratec “Cyclone” V6. Capable of producing 305 horsepower and 280 lbs-ft of torque while bettering MPG numbers, the new engine was a big improvement over the outgoing powerplant. Other general aerodynamic and NVH improvements were made and the ‘Stang received Nexteer Auto Electronic Power Steering (EPS) in 2011.

Exterior changes included an updated front fascia with a larger grille, HID headlamps as standard equipment, and a reverse indicator light integrated inside the brake light among other features.

The interior remained the same over the years, less the option of a 4.2” display between the speedometer and tach, which was capable of reading G-force, acceleration times, air-fuel ratio and other useful information.

Like the base model, the GTs also received various updates through the end of S197 line. In 2010, the up-spec GT received minor updates, but not much that distinguished it from its predecessor. It used the same 4.6L V8 engine as before, but gained 15 horsepower through minor internal modifications. The handling was also improved through the use of new spring rates and dampers. A special Sport Mode was also added to the car’s AdvanceTrac system to help control aggressive driving.

The real changes to the GT began in 2011 with the use of a high horsepower 5.0L Coyote DOHC V8, which can produce 412 horsepower and 290 lbs-ft of torque. Twin-independent Variable Cam Timing (Ti-VCT), a 7,000 rpm redline, larger valves, and heavy-duty transmissions (Getrag/Ford M82 six-speed manual and Ford 6R80 six-speed auto) highlighted the new powerplant.

The 2011 and on models received “5.0” badging, 19” wheels with Pirelli high-performance tires, stiffer spring rates, and other suspension updates. GT models in ’13 and 14’ remained very much the same with only minor updates like blacked-out tail lights, a GT500-inspired front fascia and slightly tweaked 5.0L Coyote V8 engine with eight more horsepower.

Like the rest of the Mustang models, the Shelby GT500 got a “minor” bump in horsepower in 2010 followed by a more dramatic increase in the later years. The ’10 model GT500 was powered by the same supercharged 5.4L DOHC V8 as the previous three years, but was capable of pumping out an additional 40 horsepower thanks to a revised conical cold-air intake.

2011 and 2012 saw the GT500 receive an aluminum engine block—which was 102 pounds lighter than the cast aluminum block from previous years—with slippery iron and iron oxide composite coating in its cylinder bores and revised exhaust system. These changes bumped the GT500’s output up another 10 horses to produce a total 550 horsepower. While gaining some extra horses, the GT500s fuel efficiency was improved enough to eliminate the Gas Guzzler Tax placed on it.

The introduction of the supercharged 5.8L Trinity V8 engine came in 2013. With it came raw horsepower. The new powerplant—complete with Ford GT cams, improved cylinder heads, 5-layer MLS head gaskets, and a maximum boost of 14 psi—pumped out a tire-burning 662 horses and 631 lbs-foot of torque.

Various non-powertrain upgrades were exclusive to the GT500 as well, like a restyled-front fascia, larger Brembo front brake discs and six-piston calipers, reinforced axle tubes, and aerodynamic enhancements. The 2013 model was said to have 14% less drag and 66% more front downforce to improve safety above the 200 miles per hour mark.

Paying homage to the original Boss 302 of 1969, Ford brought the Boss back for the ’12 and 13’ model years. The special edition model received an upgraded the GTs 5.0L Coyote V8 with a revised intake system, forged rotating assembly, ported heads, and redesigned camshafts, nicknaming the engine the “Road Runner.” The result of the modifications was a bump in total output to 444 horsepower and 380 lbs-ft of torque. Handling characteristics of the Boss were altered through stiffer springs and bushings, a thicker rear stabilizer bar, and a slightly lower body height.

The update to the S197 Mustang didn’t bring any significant changes to the powertrain or chassis alike, so modifications from the ‘05-‘09 model carry on to its later years. Below is a small list of common modifications found on S197 Mustangs!

Retro Styling with Rear Window Louvers: If you're a proponent of retro styling, a set of rear window louvers are a must. Nothing says a modern design can't benefit from a tried and true classic. Louvers are offered in both plastic and aluminum and are excellent for keeping interior temperatures low in hotter summer days.

Launching your Mustang Harder with Gearing: Changing up your Mustang's rear gears alters where in the RPM band you make peak horsepower or torque. The most common ratio for road/track Mustangs is a 3.73:1 gear set, but if you're more interested in the quarter mile you'll want a 4.10:1. The 4.10s will pump up your acceleration while the 3.73s retain more of your top speed. These aren't the only options, however, so consider your build when you shop for gears.

Even if you're gunning for first place on at the drag strip, you're going to want to invest in a quality suspension. Adjustable coil over kits allow you to change ride height with the turn of a knob on the top of the shock tower, so you can achieve the drag style rake while being able to readjust for the drive home.

Another option is an air ride system, but they are significantly more expensive than a coil over kit. Air lift kits are easier to adjust, usually by remote, and generally have greater height adjustment, compression, and rebound settings. If not sure which ​kit is the right avenue for you, check out this guide.

Fitting an Exhaust to Your Mustang

The attitude of a muscle car is iconic in and of itself, but channeling the same menacing presence can be difficult with a factory restricted exhaust system. Headers, cat-backs, axle-backs, mid-pipes, and mufflers all have something to say about how your Mustang sounds. We've covered all of these pieces in another guide, so if you're interested in learning how to upgrade your exhaust, read here.