Everything About the Foxbody Mustang (1979-1993) Submodels

The Foxbody Mustang is a third-generation vehicle worth taking for a drive if you are a fan of muscle cars. These Ford vehicles have proven to be stylish and strong, with their modern yet nostalgic frame notable of classic Mustang cars of the 1960s. Adding to the classic styling is your own personal touch. Make your Fox a one of a kind with styling mods!

The year 1979 marked the entry of the Foxbody Ford Mustang to the market. Times were changing. The high-horsepower muscle car era had ended. America was working its way through an economic depression, and new emission regulations were in place. It was time for a brand-new Mustang. 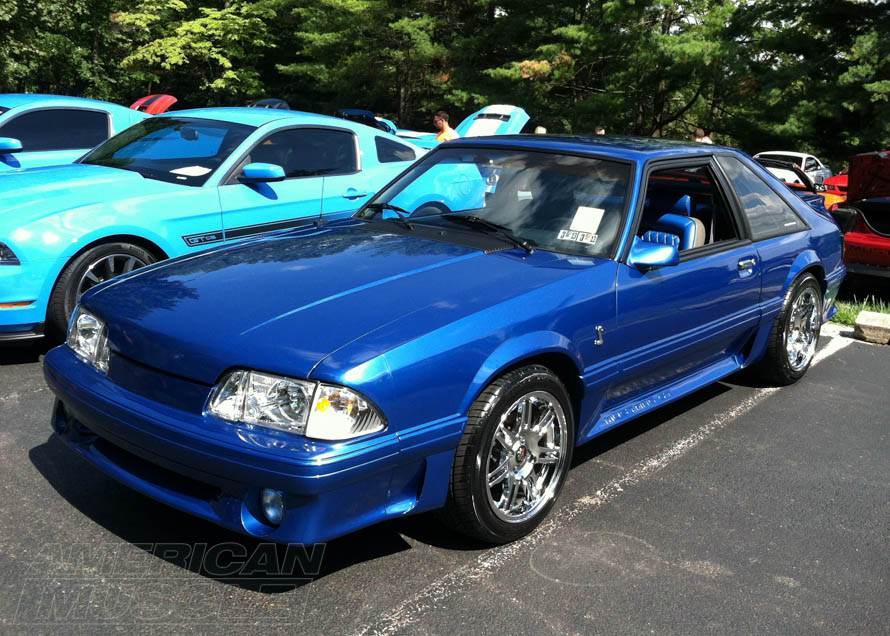 Built on Ford’s Fox platform, the Foxbody Mustang served the market from 1979 to 1993 before being replaced by its successor, the SN-95, in 1994. Through its years, the Fox expanded through various submodels, engine packages, and trims only to become one of the most popular Mustangs ever built. Below we get into different iterations and details of the Foxbody that you need to know.

While the iconic engine of the Foxbody era is the 5.0L V8—the turbocharged Lima following a close second—there were several other engines used to power Mustang.

The Cobra first appeared in the Foxbody family in 1979 and would continue on for the following two model years. The upper-spec Cobra models got a list of exterior styling updates, like black trim, Cobra graphics, and chrome door handles and locks. The 1980 model received a new front bumper, cowl-type hood scoop as well as a rear spoiler and additional black trim.

Foxbody Mustang GT – The Boss is Back!

The reappearance of the Mustang GT occurred in 1982 when Ford put a halt to the Cobra. With a slogan of “The Boss is Back,” the GT received several upgrades to separate itself from the standard-model Mustang.

The 5.0L V8 got new valves, a more aggressive camshaft, a twin-barrel carburetor, revisions to its firing order, as well as an updated intake and exhaust system. The upper-spec GT also received the front air dam and rear spoiler from the previous year’s Cobra.

The GT lived on through the end of the Foxbody line, seeing important horsepower upgrades and minor chassis updates like wider tires, revised anti-roll bars and more.

Built by Ford’s Special Vehicle Operations Department, the Mustang SVO was derived from a performance Foxbody created to compete in the 24-hour Longest Day of Nelson race. The SVO was powered by a turbocharged four-cylinder engine and had restyled body panels, 5-lug axles and hubs, and a unique SVO interior among other bits.

In 1982, the California Highway Patrol approached the Ford Motor Company in regards to building a highly-capable, lightweight police car. The result? The Special Service Package (SSP) Foxbody Mustang based on the Fox 5.0.

The SSP models came packed with options out of reach of the general public, making it more rugged and able to handle the needs of law enforcement officers. Depending on the agency purchasing them, special features like roll cages and power windows could be added to help facilitate and protect the officers inside.

The 1993 Cobra and Cobra R both featured a 5.0 V8 suped up with GT-40 engine upgrades, which laid down a 235 horsepower and 280 ft-lbs of torque. On the exterior, each model received updated front and rear bumpers, side skirts, a unique rear spoiler, Cobra emblems, and a Cobra grill insert.

The Cobra R was one notch up. The top-spec model featured larger, more-powerful braking components, an engine oil cooler, power steering cooler, and Koni shocks and struts. Being built for racetrack use, the Cobra R lacked air conditioning, a stereo system, and a rear seat. Less weight, faster times.

Common Modifications for the Foxbody Mustang

Subframe Connectors: Hands down, one of the most important upgrades for the Foxbody Mustang is the addition of subframe connectors. The reason? The Foxbody’s unibody chassis design is weak and risks being twisted or distorted by a throttle-happy driver. Trust us, the 5.0L V8 may only produce 220 horsepower and 300 ft-lbs of torque, but it has enough grunt to do damage to the Foxbody’s subframes and floor pans.

5-lug Wheel and Disc Brake Conversions: Converting your Foxbody to a 5-lug wheel setup will pay off in more ways than one. First, by completing the swap to 5-lugs, you’ll have access to a larger selection of wheels. Since the Mustangs of today come equipped with 5-lug wheel patterns, aftermarket companies have followed and are offering their choices with five lugs instead of four.

Have you been wanting that extra stopping power? A 5-lug conversion is the place to start. Converting your Foxbody to accommodate the extra lug also opens the door to big brake kits up front as well as being able to swap out the rear drum brakes for more-powerful disc units.