Most Popular in Mustang Exhaust Pipes

Regardless of your preference for an H-Pipe or X-Pipe, your Mustang is going to sound and perform better when you replace your stock mid-pipe with an aftermarket alternative.

The differences between the styles of mid-pipes--h-pipes, y-pipes and x-pipes is one of the most common Mustang performance related questions that comes up time and time again. In this guide, we will lay out the differences and commonalities between the three types, as well as talk a little about how to choose among them. 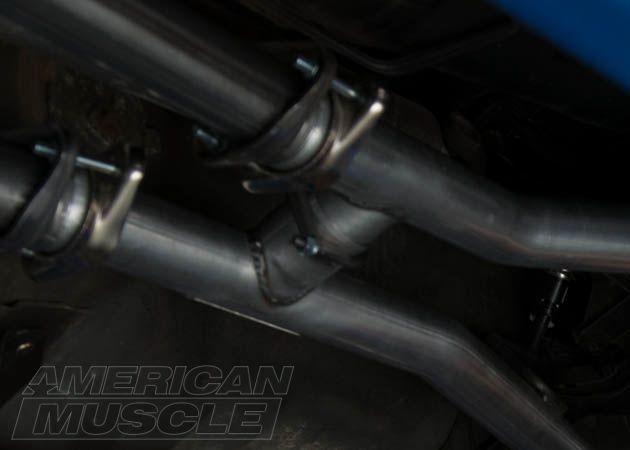 The obvious difference between them all is they look different. As you can see from the diagram, they also have different flow patterns for the exhaust gasses to follow. Each is designed with a different strategy for flowing heat and gas coming out from the exhaust manifold and then through your mufflers, eventually ending out the back of your car. You'll want to make your selection based in part on the aftermarket and stock exhaust components currently on the car, as well as any future plans you might have for your Mustang. 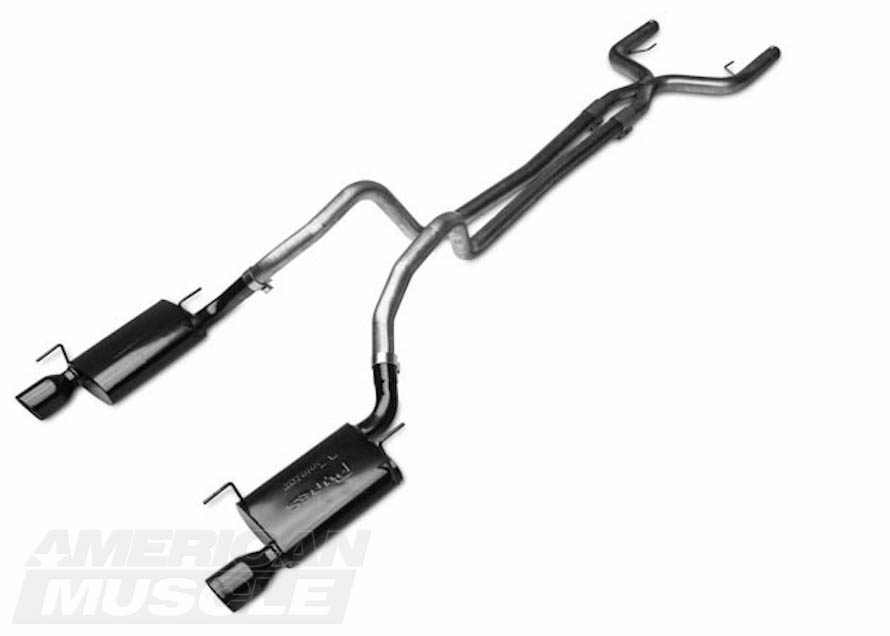 The Three Types of Pipes

X-pipe: Mid-pipes built with a crossover, or "X" shaped design, purposely cross exhaust streams to even out flow and streamline exhaust gasses through the rest of the system. X-pipes are generally raspier and louder than H or Y-pipes and have been shown to provide slightly more power than their counterparts. You are likely to see most of the power gains higher in the rpm band with an X-pipe.

H-Pipe: An H-pipe is better at balancing sound and produces a more consistent, classic muscle car growl. It does less than an X-pipe in the way of balancing exhaust gasses but still flows quite well. H-pipes maintain the back-pressure necessary for torque gains earlier in the rpm band, as opposed to the top-end power seen from an X-pipe.

Y-Pipe: A Y-pipe came standard on many late model V6 Mustangs and are sufficient for a mildly modded car. However, for those looking to install a power adder or make maximum horsepower, converting to a dual setup is ideal. The increased airflow from upgrading to an X or H setup gives you much more room to accommodate increases in horsepower and torque, relieving excessive back-pressure.

What are the Similarities Between Mustang Mid-pipes?

Both aftermarket X and H pipes will provide increases in horsepower and torque, as well as change the sound and pitch of your exhaust note. X and H pipes also cross gas streams, helping to even out pulses in airflow caused by the firing order and subsequent airflow coming from the manifolds. While there are no more "true dual" setups (two straight pipes coming from either header with no cross-connection), the benefits reaped by the crossing of gasses between the two sides has left the days of true dual only to the past. 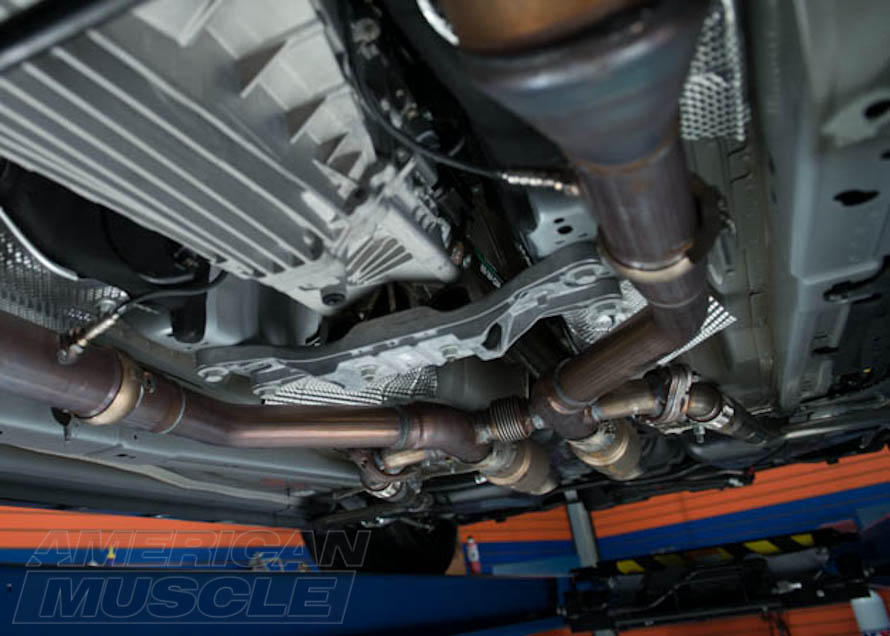 But What About Straight Pipes?

Straight pipes refer to when you eliminate the catalytic converters in favor of having a straight, flow through pipe without restrictions. Unless your Mustang is a track only pony, removing the converters will be illegal depending on what state you live in. Keep in mind what you're building your Mustang for and where you'll be driving it before deciding to combine a set of straight pipes with the rest of your exhaust.

Off-Road or Catted: Which is better?

While in decades past catalytic converters were bulky, restrictive, and dangerous when combined with modified cars, today they are exceptional when used on aftermarket mid-pipes. Modern advancements have allowed for catalytic converts to flow a substantial amount of air while retaining their primary function of reducing emission levels.

Regarding the S550 Mid-Pipe

The factory mid-pipe on a 2015 and newer Mustangs is quite subpar. It weighs around 71 pounds, has a large, restrictive resonator that looks like a suitcase and is substantially quiet.

The S550 comes from the factory with an H style mid-pipe, which gives it a deep style tone. However, most people prefer to change the exhaust to their own liking, primarily with an axle-back exhaust and a mid-pipe. 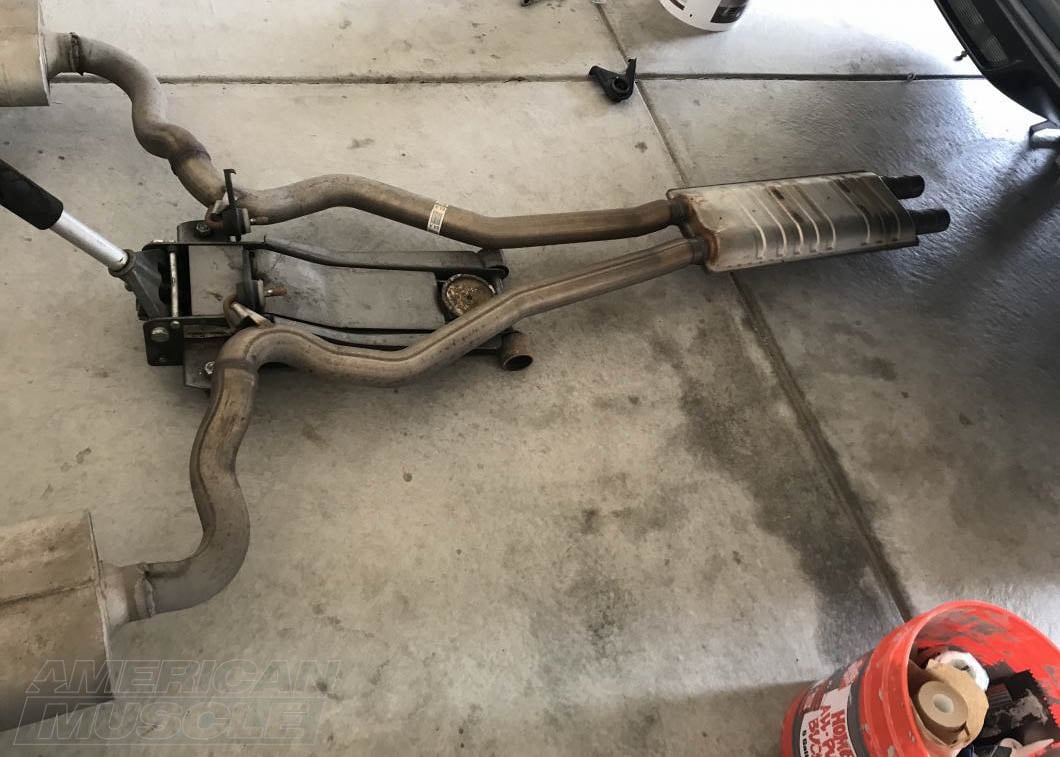 How to Choose The Right Mid-pipe For Your Mustang

So which one is right for you? Well, you first must decide on your plans for the car - if you are building a high-horsepower drag machine your choice will be different than a mildly modded street car. If you need a boost in low end torque, pick up an h-pipe. If it's high end horsepower later in the rpm band you seek, an x-pipe is the way to go. Keeping power in mind is important but most Mustang enthusiasts make their choice based on sound. Like previously stated - x-pipes provide a higher pitched, raspier note and can drone a bit whereas H-pipes produce a deeper, old-school muscle car growl. Personal preference will dominate and you can check out a sample sound clip on the product's page if you are unsure of which is right for you. 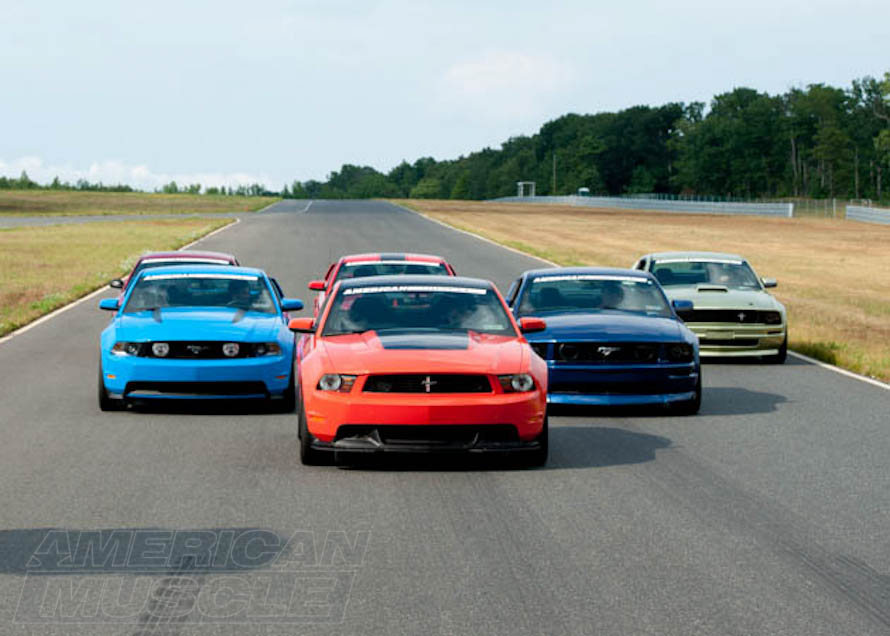 No matter what setup you go with, you can be susceptible to drone. Some components of your exhaust system will be more prone to drone, but it can be one of those things that pops up due to the exhaust pieces not flowing well together. That aside, different mid-pipes will produce different sounds.

X Pipes tend to produce a more high-pitched tone with a bit of raspiness to the exhaust note. Exhaust rasp is not a bad thing, but its constantly popping can be a deterrent for some enthusiasts.

Y Pipes are more closely related to X pipes and will give off a raspier exhaust note than your low and rumbly H pipes.

Most V8 Mustangs came directly from Ford with an H-pipe standard and V6 Mustangs prior to 2011 were equipped with a Y-pipe. In general, most people only upgrade their Mustang’s mid-pipe to improve exhaust flow in a quest for more horsepower and torque, but it can change the sound as well. 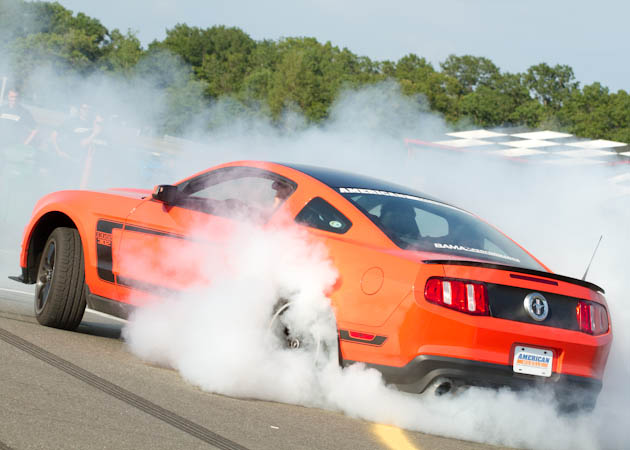 Mustang X-pipes – The Sound of Power

The most popular choice by far is an x-pipe, which greatly increases high-end horsepower and torque; this is why so many performance cars utilize the “X” design over the standard “H” design. An X-pipe allows the exhaust pulses to merge at the crossover point for a smoother flowing exhaust that results in less back pressure for more power. This modern "X" crossover pipe design adds a loud, crisp, raspy race car growl to the sound of your exhaust that is very similar to modern day high-end exotic sport cars.

So when upgrading your Mustang’s exhaust for better flow and more power, remember to consider how these changes will affect the sound of your vehicle. If you love the classic rumble of an old school muscle car, an H-pipe is perfect for your needs, but if you want a loud raspy growl, then an X-pipe is in your future.​ 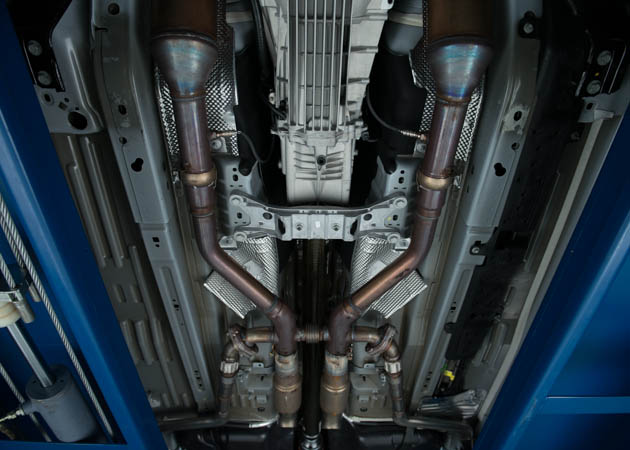 Mustang H-Pipes – The Sound of a Classic

On the other hand, an aftermarket H-pipe performs far better than the restrictive stock factory mid-pipe. It will not only improve low-end torque and increase horsepower but will also help add a deep, low tone muscle car rumble to the sound of your exhaust with its classic "H" crossover pipe design. This is similar to the sound of the old school muscle cars of the ’60s and ’70s.

Mustang Y-pipes – The Sound of Beige

The poor lowly Y-pipe. The stock factory Y-pipe found on V6 Mustangs serves its purpose very well to exit the engine's exhaust to the rear of the car and that’s about it. The Y-pipe’s restrictive design does not flow very well (when looking at V8s in comparison to an X or H) and does not add any real performance benefits to your vehicle. The sound it produces is just bland and boring. That is why so many opt for a V6 dual exhaust conversion kit.

For those of you with the EcoBoost Model, you have an inverted Y-pipe with the Y portion facing the rear of the vehicle. This Y-pipe leads into a dual exhaust from the factory, so the usual Y-pipe rules don't apply to the turbo four cylinder.