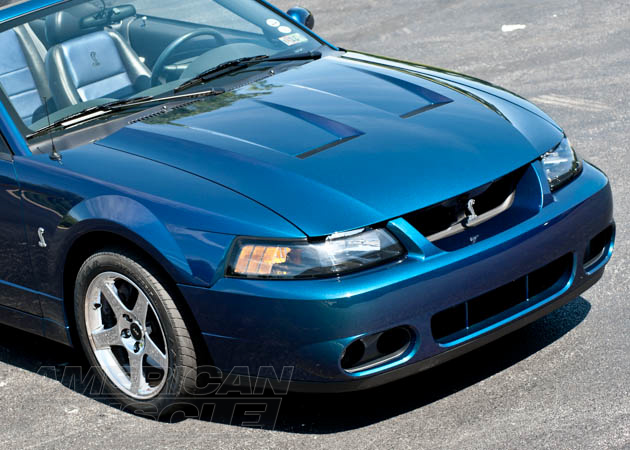 The Ford Mustang has a look that is in a league all of its own with distinctive front-end styling that can be spotted a mile down the road. Part of this superior look comes from the Mustang’s bodylines, especially down the hood. This guide will go over some different popular hood options and give you everything you need to know.

Styling and performance are what a new hood is all about. Whether you're looking for a cooler engine bay or just another way to personalize your Mustang, there are a variety of styles to choose from.

There are many unique styles of Mustang hoods such as:

Factors When Replacing Your Mustang's Hood

When picking a new hood, the first concern you should have is in making sure it will clear your engine setup. This applies mostly to heavily modified Mustangs with swapped engines, but with all of the new styles coming out it is definitely something you want to keep in mind. Some styles of hoods have vents or other intake/heat extracting abilities to consider as well.

Heat extractor Mustang hoods use one long or two medium sized (more common) vents on top of the hood to suck hot air out of the engine bay. Heat extractor hoods use aerodynamics to push the air out of the engine bay by creating an “opening” for all of the hot air to escape out of. Depending upon the make and style, heat extractor hoods can provide lower temperatures up to 10 degrees under normal conditions. A huge benefit, especially for supercharged and heavily modified Mustangs that tend to run hotter than stock engines. 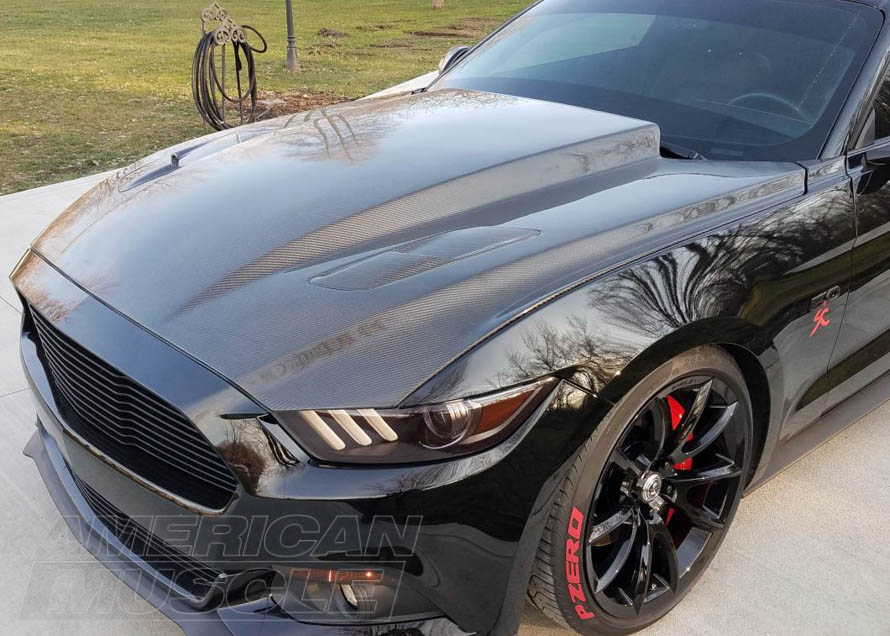 Ram Air hoods have been around since the ‘60s and function exactly how they are named; they ram extra air into your engine bay to help with cooling and performance. Either one opening in the middle or two side-by-side openings will sit at the front of the hood, angled towards where the nose of the car is pointing. As you travel down the road, cool ambient air is caught and fed into the engine bay through the vent(s).

Ram air hoods not only help to keep temperatures down, but also can help with cold air intakes by supplying them with denser air, leading to an increase in power. It is worth noting that there are a fair amount of ram air hoods available on the market that don’t have functional air vents, and are thus not a true ram air hood. Be sure to carefully read the product description to make sure you’re getting the product you think you are. 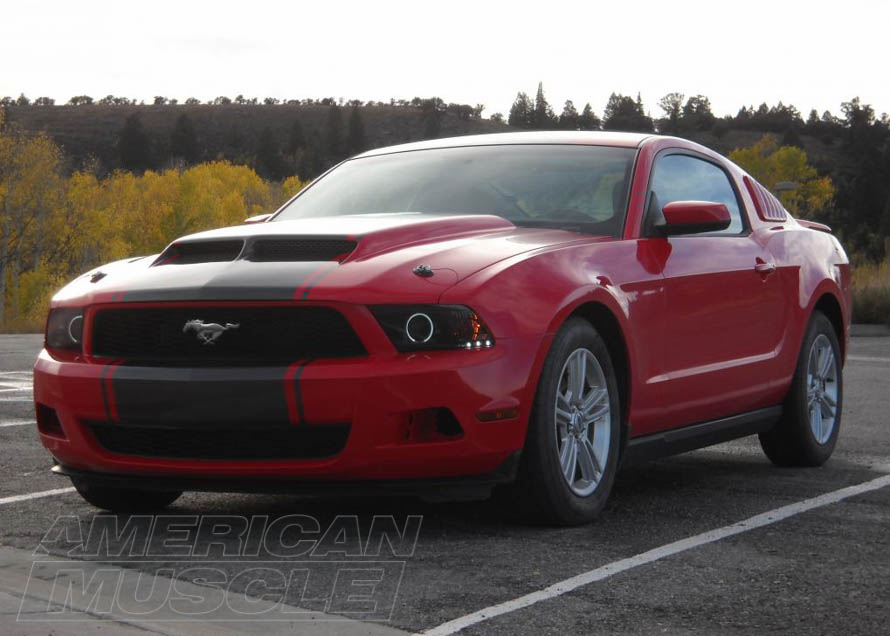 Arguably one of the most popular hood designs of all time, cowl hoods provide more vertical room in the engine bay with a raised hood design. Ranging anywhere from 1”-6”, Mustang cowl hoods have a quintessential muscle car look that can fit a bigger than stock engine underneath it. Cowl hoods can inhibit your vision (depending upon the size).

Most hoods available do not present any visibility issues except for cowl hoods that exceed 3 inches. It is important you have a clear view of the road ahead, so unless you are selecting a hood for your weekend warrior or a track car that requires the extra clearance, I would suggest selecting a hood that doesn’t obstruct your view. A cowl hood is also one of the most aggressive styles you can choose due to many of those who install one are hiding a boosted/built motor. 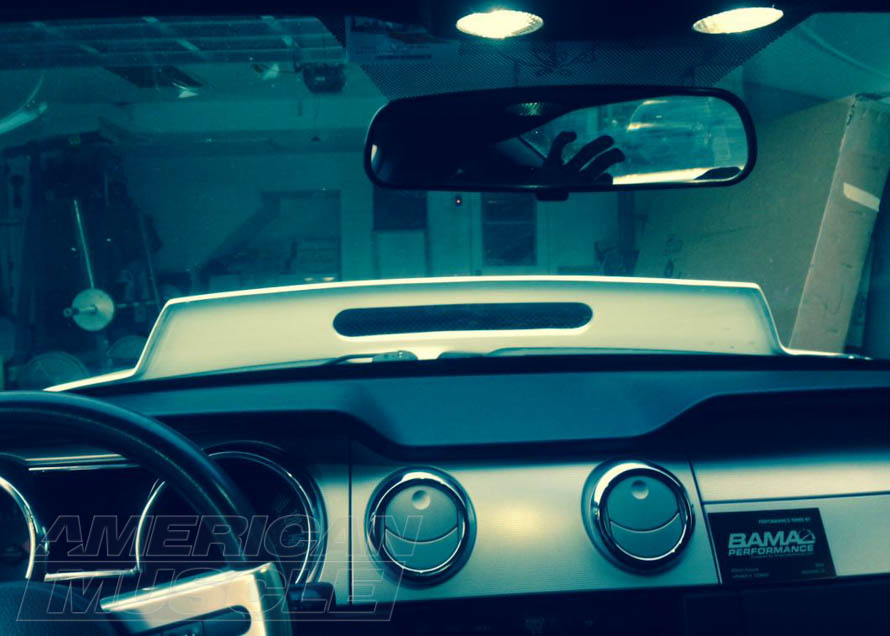 4in Cowl Hood from the Interior

The Mach 1 and Cobra R hood style have hung around the Mustang world for some time, well after the production vehicle the hood was designed for ended its run. The Mach 1 Mustang hood was first featured on the ’69 Mach 1 and is essentially a ram air hood.

The 2000 Cobra R Mustang featured an incredibly aggressive hood with rounded/soft hood lines, a look that resonated with enthusiasts. In some ways, it is a less boxy version of a cowl hood. After the production of the Cobra R ended for that one year, aftermarket manufacturers picked up the design and began offering it.

Will Replacing My Hood Improve My Mustang’s Performance?

In most cases, replacing the factory hood on your Mustang with one of the many aftermarket options will improve the performance of your Mustang. Aftermarket hoods are typically:

Performance benefits aside, replacing the hood on your Mustang is mainly for appearance and style than anything else. Regardless, every hood will offer something different so it is important to carefully weigh out all of your options. 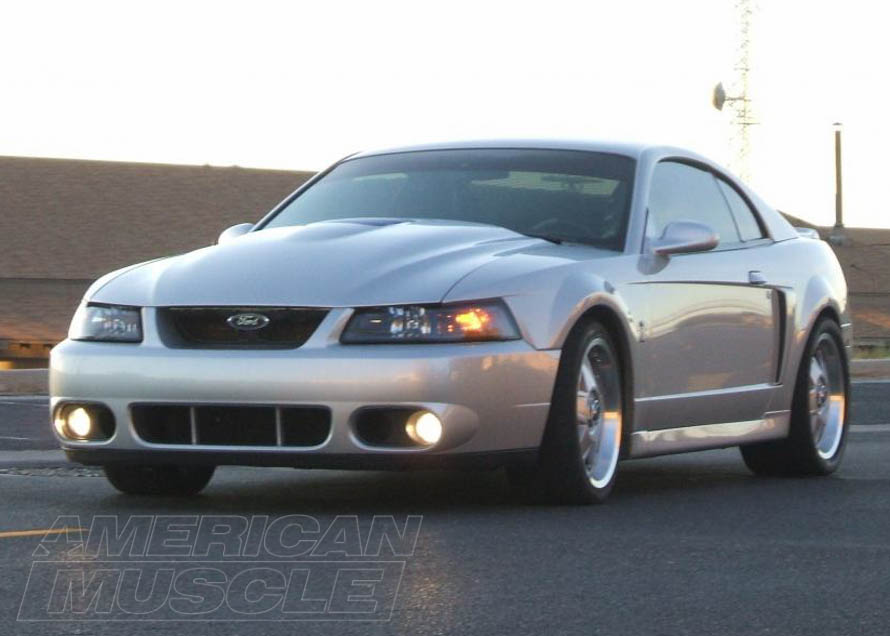 Fiberglass hoods are not much lighter than stock, but carbon fiber and plastic will be much lighter and significantly reduce weight. Any weight savings translates into a faster car, especially when removing it from the front end of the car.

Before you buy the hood you should also plan on a set of real hood pins. The fake hood pins are not going to hold down your hood at high speeds. Aftermarket hoods themselves may be strong but the hood latch may fail with time and exposure to high speeds. There are plenty of stories of hood popping up at high speed. So be safe and get a set of hood pins. They will be the single most cost-effective purchase you will ever make if the hood latch does in fact fail.

This tends to vary, but by in large they do not. More often than not, most aftermarket hoods come unpainted or in a carbon fiber finish. However, there are some pre-painted options out there.

What Hoods Fit on My Mustang?

Regardless, that’s just what Ford chose to do, and the Mustang aftermarket has had to adapt. Ford consolidated the front bumper design among the various models for the 2013-14 years as well. Unfortunately, if they had done this in 2010 then the bumpers and hoods for all six years would match. As it stands, each year range has its own hood design and can't be mixed and matched. 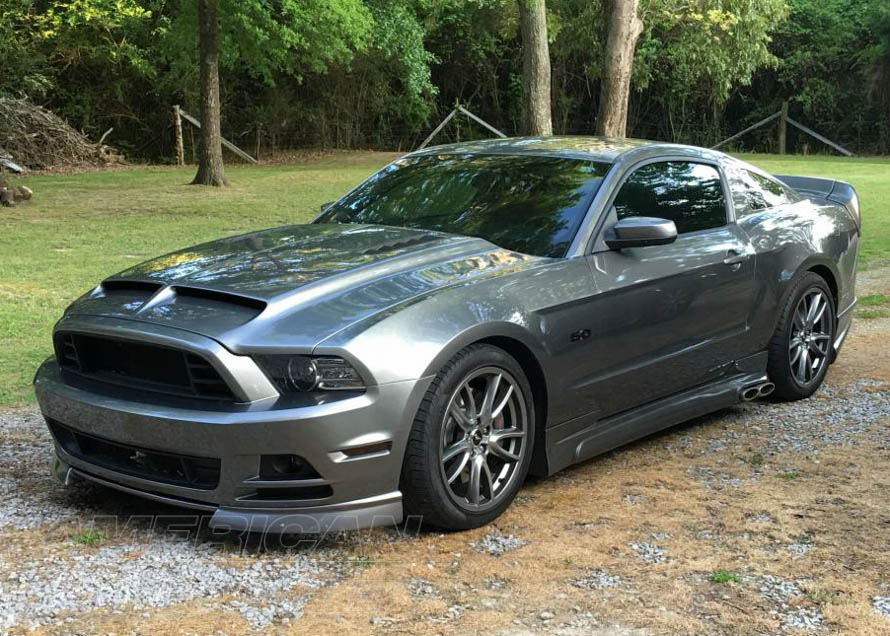 How Can I Upgrade the Look of My Stock Mustang Hood?

If you don’t want to get rid of your whole hood setup, you can upgrade the hood you have. You can add a hood scoop, heat extractor vents, and even led turn signals for 2005 Mustangs. If you like the bodylines of the stock hood, you could also consider adding a set of decals to the hood for a unique, one-off look.

One more touch to add to your hood would be a set of hood struts. They come in black or chrome and allow your hood to stay open on its own instead of using the factory prop rod. The prop can get in the way while you're working in the engine bay.

How do I Install a Hood on My Mustang?

Installation of an aftermarket hood is not very difficult, but it does usually take at least two people. Three makes it much easier. Two people will need to hold the hood and one to insert and tighten the bolts. Check out an install guide or two and do some research before you buy the hood as some will require you to relocate your windshield washer nozzles.

What Happens to My Windshield Washer Nozzles If I Replace My Hood?

If you replace the stock hood with an aftermarket one you will need to figure out what to do with your windshield washer squirter nozzles hidden at the edge of the underside on the stock hood. While you can opt to not put them back on, there are many relocation kits available that will allow you to hook them up to your aftermarket hood with ease.