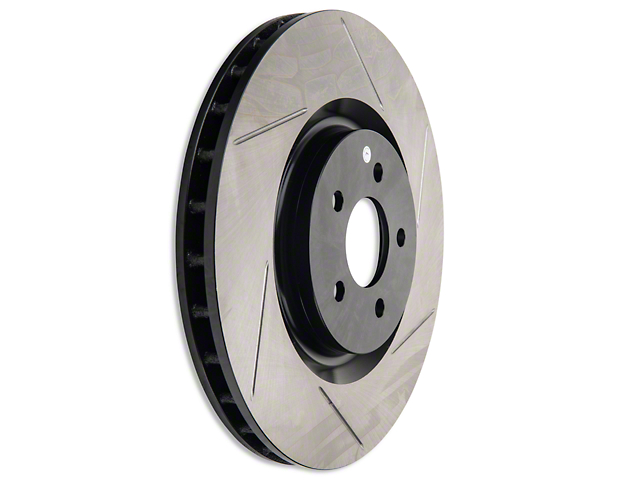 Performance Rotors with Lots of Useful Features. Fabricated to work with powerful Brembo brakes, the StopTech Slotted Rotors, Front Pair for the 2007-2012 GT500 or 2012-2013 Boss Mustang bring an extra load of stopping power and brake performance to your street machine. Vented to cool more rapidly during repeated use, the rotors also feature short slots at an opposite angle to the vanes. These scuff the pad surfaces so that they keep their high friction and don’t succumb to glazing. They also ensure your Mustang can stop much faster in rain and wet.

Manufactured for Durability and Function. During the manufacturing process, StopTech uses extra carbon in their Slotted Rotors, creating components with extra tensile strength, which means they won’t split or fracture under heavy use. The parts are made in one piece, and feature a black e-coating on the hat, edges, and vanes to keep rust and corrosion at bay. The rotors are fully vented for cooling purposes and also include precision-cut slots in the rotor face. These components are USA-made.

Made for Great Stopping Power without Fade. The StopTech Slotted Rotors are made with several design features which together create a powerful stopping instrument, giving your Mustang extra braking power plus shortened stopping distances even in slippery, drenched, wet conditions. The slots funnel water and other contaminants (brake dust, even gases) away from the rotor friction surfaces and to the outer edge of the rotor, where they are shed via centrifugal force. The same rotational force, combined with curved ventilation vanes, pumps air through the interior from the center to the edge, creating a powerful internal cooling effect. This keeps brake fade (caused by temperatures rising above a critical “kneepoint”) from affecting brake strength even during hard, repeated performance braking on the track.

Installs with Ease. Bolt-on installation is what is needed to apply the StopTech Slotted Rotors to your Mustang – a quick and straightforward process that doesn’t require modifications or even bleeding of the brake lines.

Set of Two Rotors. The StopTech Slotted Rotors kit is made up of (2) 13.97” slotted front rotors.

Includes No Warranty. The StopTech Slotted Rotors do not carry a manufacturer's warranty. Instead, they are sold “with all faults” and “as is” – though in practical terms, their high quality and factory inspection means they’ll function flawlessly for many years.