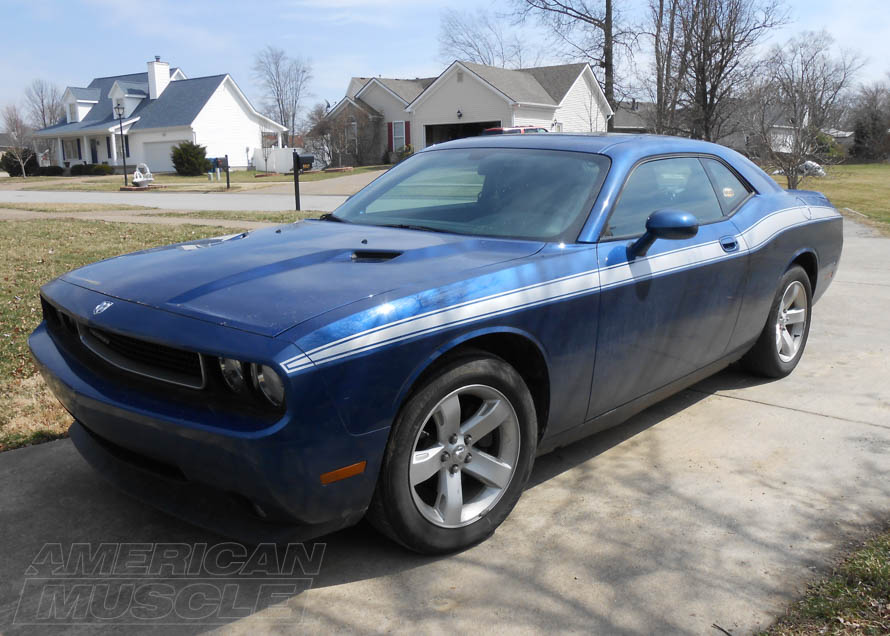 You don’t buy a car like the third-generation Challenger without style in mind. Even as a blank slate, these cars built since 2008 have an undeniable presence to them. Their bold form demands attention, and whenever one passes by, there’s no ignoring it. Emphasizing the factory body style with proper decals and badges is the perfect way to enhance this car’s boisterous presence. Installing either is very easy – and it doesn’t run a fortune to process.

Some prefer the striped look, no emblems, no stickers, just a blank slate. Others take that blank slate and run with it. There's a medley of styles and attributes you can apply to your Challenger, transforming it into a reflection of yourself.

Challengers aren’t always a blank canvas. Dodge has produced Challengers that let the body do all the talking, such as the Hellcat and Demon, but the designers have used vinyl decals to emphasize the features of the vehicle magnificently.

Aftermarket decals come in a variety of shapes and sizes, but if you’re looking for the best designs for the car, it’s a good idea to stay in the realm of what they’ve rolled of the assembly line with. By doing so, you can achieve the style of performance models while using surefire contrast to stay in line with an appropriate feeling.

Following is info about the factory decal options.

R/T: Road and Track Challengers arrive with a variety of factory decals. Some come with stripes that run the beltline of the car, others with stripes that run from the center of the hood to the center of the trunk. Racing stripes have also been in the arsenal of decals used by Dodge on this model. Some are blank slates but this model is an excellent point of reference when deciding what decal designs work with the Challengers body style.

SRT8: The SRT8 model has used a few variants of decal designs to emphasize the Challenger’s body. The SRT8 striping almost always runs from the center of the hood to the rear with wide stripes. This is a simple design that distinguishes the SRT8 models and also enhances the natural shape of the vehicle.

Redline: The Redline package implored the use of traditional pinstriping on the beltline to distinguish itself. Pinstripes have been used on vehicles since the beginning. At first it sounds kind of ridiculous to even throw a small detail like this on a vehicle. When referenced on the Redline, it becomes apparent that this design is extremely effective and has its place on Challengers.

Shaker: The Shakers decal design is one that can be found on R/T Challengers as well. It may seem that Dodge simply reused this design generically but when the Shaker is placed in the middle of the stripe on the hood it emphasizes the layout of the hood and the shaker itself. This goes to show that a simple design can make night and day differences when paired with the right features.

T/A: The T/A Challenger was notoriously paired with beltline striping as a callout – much like R/Ts were. On late model T/As you will also find that the hood, trunk, and roof that are fitted with a matte black decal that is completely solid. This type of striping is yet another simple design but, on a big wide car like the Challenger, it is extremely effective.

After you’ve looked at examples of Challenger decals you can begin to shop for aftermarket options to best fit your personal desires. You will find decals that match factory equipment of models of Challengers along with all sorts of other aftermarket designs. Typical designs include strobe stripes, racing stripes, hood decals, and tail end stripes similar to the classic R/T designs of the 70’s.

Installation of aftermarket graphics and decals is fairly easy but requires keen hand-eye coordination and proper preparation. Cleanliness is key; before installing any sort of graphic the paint must be completely clean and clear of any contaminants.

Some may require the use of heat for proper settling and you will want to use a squeegee to push out any air bubbles once the graphic is set in place. Soap and water solutions are also sometimes used to help the graphic slide across the surface as it is set in place.

Love them or hate them, emblems are a part of factory Challengers. Some will opt to remove the factory badging entirely, while others will replace them with custom badging. The removal and installation of badges is something one can do at home with a few simple tools. They may appear as a permanent fixture but, to the surprise of many, are fastened to the vehicle in simple manners.

Emblem Removal: Emblems on body panels are held in place with glue. This means their removal is extremely simple. You will want to be careful during removal to ensure you do not damage the paint though. To remove the emblem safely, you will need a heat gun, some fishing line and some sort of solvent to remove any traces of glue left behind once the emblem is removed.

You will want to use the heat gun to soften up the glue that holds the emblem in place while being careful not to warp the body panel behind it. Once the glue is good and soft, you will work the fishing line behind the emblem, gradually separating it from the panel.

Once the emblem is removed, simply use the solvent to remove the leftover glue. In some cases, pins may be used to hold the badge in place, if this is the case, holes will be found in the panel for the pins to slide into. If a new badge is going in place of the old one, this isn’t an issue; otherwise, bodywork will be required to hide any evidence of an old badge.

Emblem Installation: Installation of aftermarket emblems is very simple. You will want to ensure a clean surface in order for the emblem to stick and that when you secure the emblems they are straight and level. Emblems will have glue on the back out of the package, so you will simply just stick them to the body. If you are imitating the appearance of a performance package Challenger, you will want to be sure the emblems used are in the proper location and designed to perfectly mimic the car you are trying to clone.