Most Popular in Mustang Turbos

Single Turbo vs. Twin Turbo: What is Best for Me?

After building up your Mustang for boost the last piece of the puzzle becomes which turbo to pick. Keep your end goals in mind when deciding just how big you want to go.

There's more to forced induction than deciding whether you want a turbocharger or a supercharger. As far as turbochargers are concerned, you can optimize a turbo setup for any type of Mustang build. The question is what should you go with? 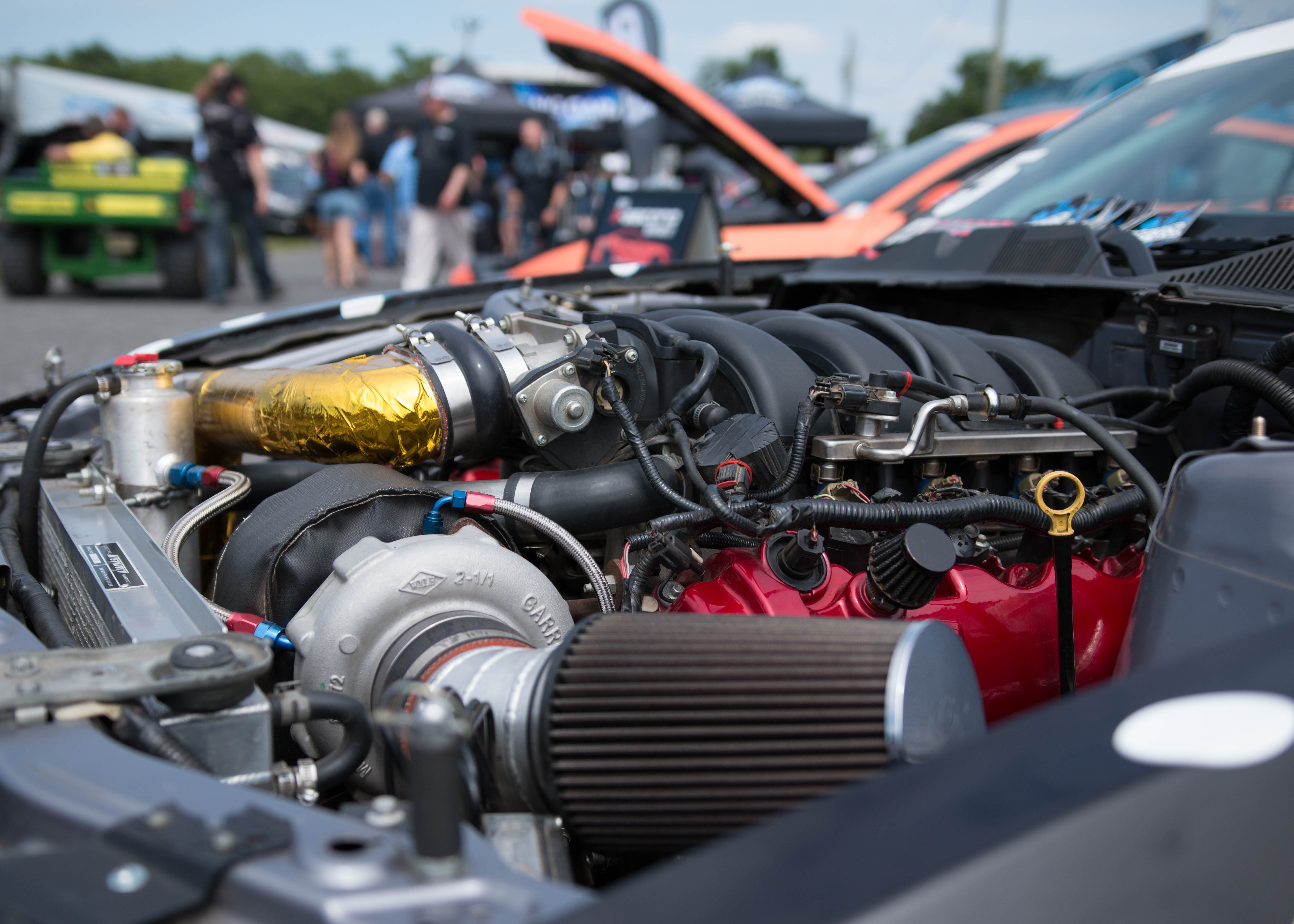 How Does a Turbo Work?

A turbocharger is a form of forced induction. Instead of being powered by a belt like a supercharger, it's powered by the flow of exhaust gases. As the exhaust flows past the turbine, it spins a compressor in the housing. This compressor builds boost, and that compressed air is routed into your Mustangs intake system. Turbos are an incredibly efficient way to make horsepower since they do not have any parasitic drag like a supercharger would. However, since they are reliant on exhaust gas flow, boost isn't made instantly. They come in a variety of setups, but the most common are single turbo kits or a parallel twin turbo kit. 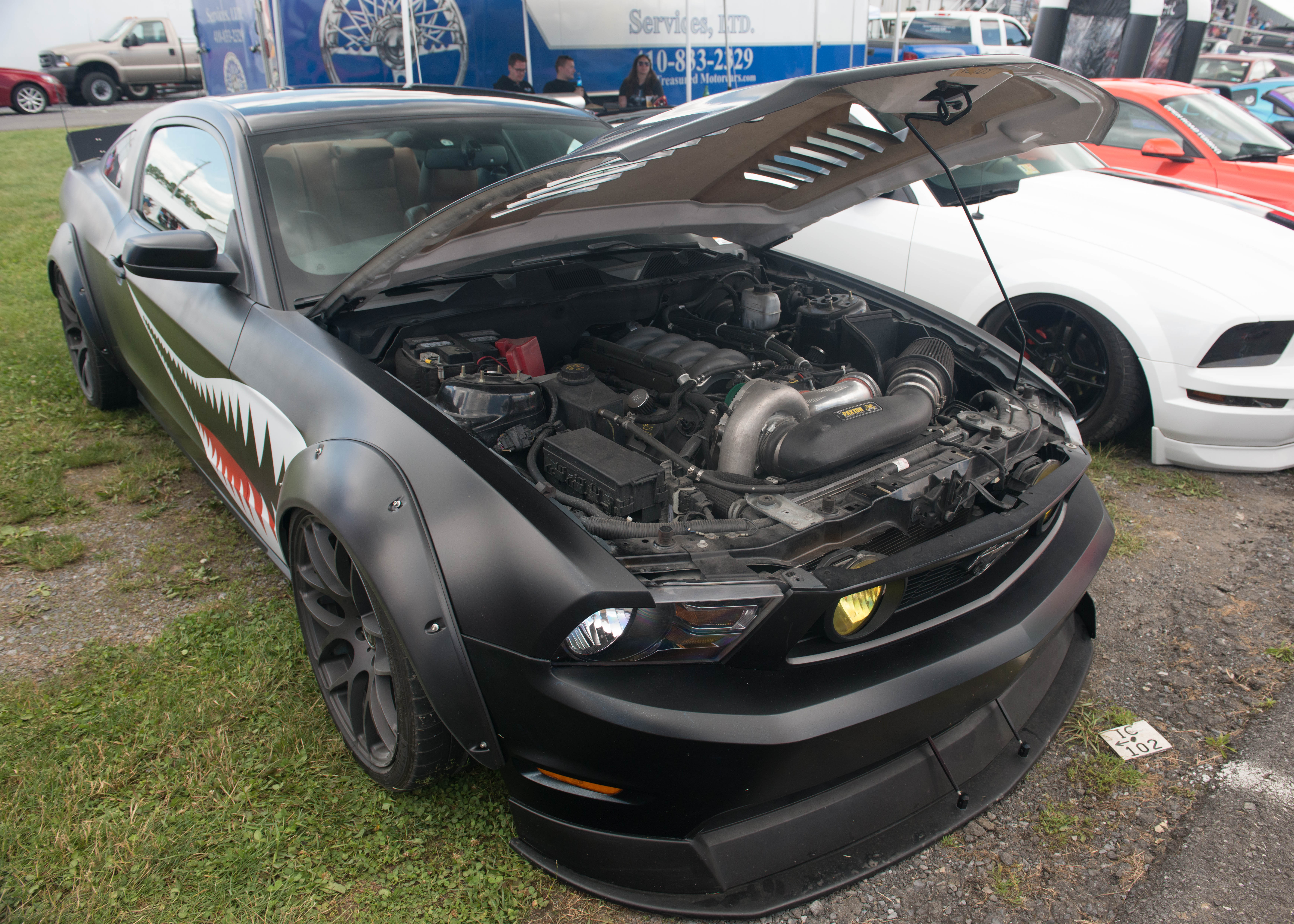 Single turbo kits are the most popular set up for a few simple reasons. The first reason is cost. Turbos are very expensive; for a good turbo you could pay about $1500-$2500 or more. This cost jumps substantially when you add another turbo to your kit. Another reason is space. Often times it's hard enough to find enough real estate under the hood to add a single turbo and all its associated plumbing. This becomes much more difficult when you have to find room for a second turbo as well. Singles are great for making big horsepower too. They tend to have a broader power band than a twin turbo setup and do not run out of steam on the top end. The single turbo does build boost slower, so it makes it easier for high horsepower drag cars to hook up from a dig. Once they have traction and boost is building the power of the single will rocket them down the quarter-mile.

Despite some negatives, twin turbos are excellent kits if you can afford them! Twin turbos are awesome for the daily driven or mostly street-driven Mustang. Each turbo only needs the exhaust from 4 cylinders to spool it, so they are able to spool much faster than a single kit. Smaller turbos in a twin turbo kit can also make very similar power as a larger single turbo. Less lag for the similar power gain, but there's still the cost to think about. When they aren’t busy rocketing you around town, twin turbo kits also look very impressive under the hood. Whether you are making rounds at the local shows, blasting down the drag strip, or in a hurry to get the kids to soccer practice, twin turbos make for a great all-around turbo experience.

How Safe are Turbochargers for Mustangs?

The integrity of a turbocharger system is truly an instance of “you get what you pay for.” A cheap, low quality system may save money upfront, but is certainly more susceptible to having issues down the road. However, a quality system installed in a high quality manner can be quite safe. For example, many manufacturers are starting to use turbochargers in smaller engines which can make the same power as the larger, less fuel efficient engines.

A turbocharger works by spinning turbines with your Mustang's exhaust gases and rerouting the compressed air back into the engine. A turbocharger has two sections: the turbine housing and compressor housing. Inside of both housings, there is a wheel which is connected to the other by a shaft. As the turbine side is spun by exhaust gas it causes the compressor wheel to spin. As this happens the compressor wheel starts to create suction, drawing air into the turbo and forcing it out the discharge.

The exhaust enters the turbo through the turbine exhaust gas inlet. As it enters it pushes the turbine wheel, spinning it and then exiting through the outlet leading to the downpipe which connects to the rest of the exhaust. The air enters through the compressor air inlet. As it enters it is compressed and shoved out of the compressor discharge. In most conventional setups the air is then pushed through an intercooler located in the front of the car, cooling the air down before forcing it into the motor. 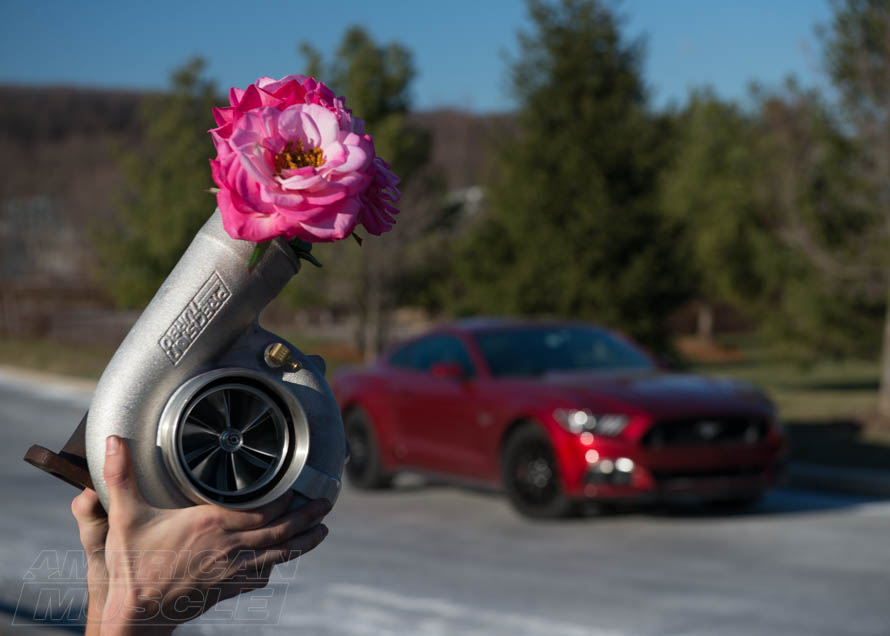 Do I Need a Tune?

If you're looking to turbocharge your Mustang a tune is an absolute must. Without a tune, your Mustang's ECU can't respond properly to the amount of air being pushed into the cylinders. This can cause lean burns and massive engine failures. A tune will not only keep the engine healthy and safe, but also work well with the new found power your Mustang will have. A high quality dyno tune is strongly recommended. 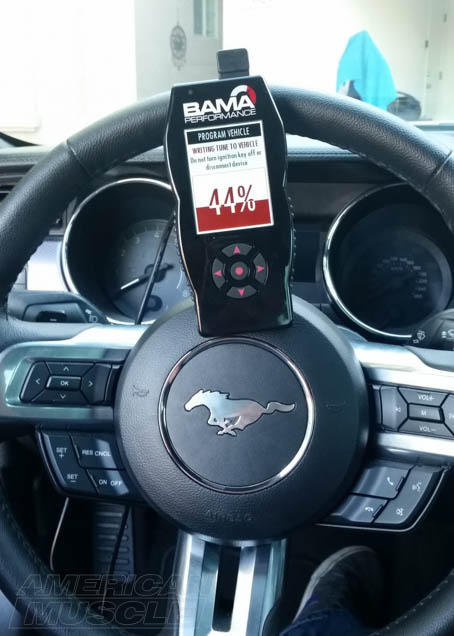 What do I Need to Change to Install a Turbocharger?

From a stock engine perspective, just about all kits will work completely fine. Kits include things such as the turbo itself, piping, intercooler, blow off valve, exhaust manifolds (if required), intakes, miscellaneous couplings, and fittings, etc. The only parts most kits lack quality in is the fuel pumps and fuel injectors. High quality injectors, like Injector Dynamics, would be a fantastic compliment to the system itself. If you have modified your engine some changes might be necessary. Common modifications such as long tube headers and cold air intakes would have to be removed, as the turbos need their own piping to route the air correctly. Certain manufacturers also require the removal of the stock front sway bar which harms handling slightly but removes weight and provides additional clearance. However, not all manufacturers require removal.

The purpose of these is to vent pressure if it goes above a preset amount of PSI. When the throttle is released and the butterfly valve in the throttle body starts to close the pressure starts to back up, the valve opens releasing the excess pressure preventing damage from occurring due to high pressure.

There are a few items that certainly make the swap more beneficial and safer as well that do not come in the kit. Oil pumps are always a fantastic upgrade to compliment the new found power. Oil pumps provide extra insurance for the safety and reliability of the engine itself. Depending on the amount of power goals one is aiming for, a clutch change (if you have a manual trans) is also a good idea if pushing past 650 rwhp. 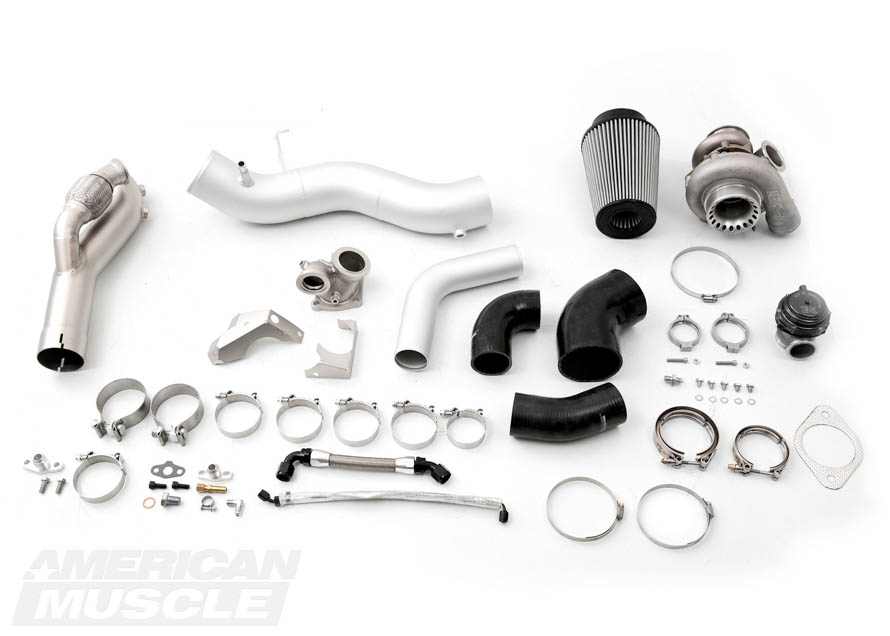 How Much Power Can I Make?

In comparison, a 2015 5.0 engine can handle around 900 HP at the rear wheels in stock form! This is highly dependant on the tune and build itself, but 850-900 is around the limit the newest iteration of the 5.0 engine can take. 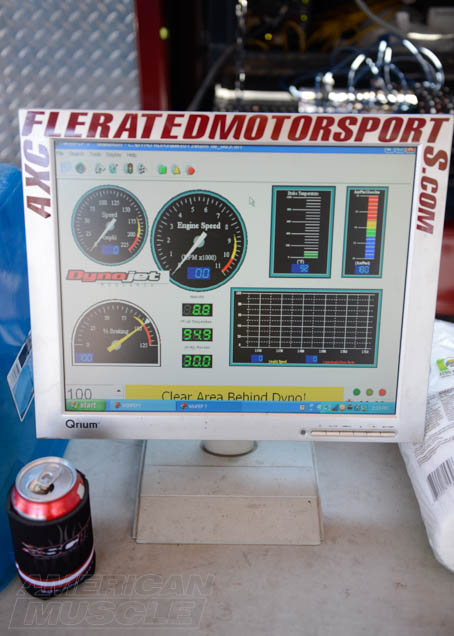 Blow Off Valves: Vent to Atmosphere vs. Recirculating

Before we start off, it is important to understand the purpose of a Blow Off Valve (BOV) and the types. The role of the blow off valve is to prevent compressor surge. Compressor surge occurs when the throttle plate is closed, either between shifts or during deceleration. Although the throttle plate closes, the turbocharger has already processed the air, and if this air is not redirected, it will backtrack to the turbo. If this air reaches the compressor housing, it will turn the compressor wheel backward or at least try to. In most cases, it will slow down the compressor or stall it, which will result in an oscillating fluttering sound. While some people like the fluttering sound, compressor surge causes turbo lag, hurts overall driveability, and puts stress on the bearing and shaft of the center cartridge in the turbo.

A vented valve (also known as a vent to atmosphere) discharges into the atmosphere, making that sound that most people associate with turbochargers. A recirculated valve routes the pressure back into the system. Vented BOVs aren’t for every application, and we're not necessarily talking about sound quality. Your engine’s turbo system helps dictate which type of BOV is best for your Mustang.

A turbocharged, mass airflow controlled engine runs a recirculating BOV because the system is a self-contained, closed loop and the computer has determined its fueling strategy based on the flow. Re-inserting the boost into the system will not upset engine operation. Running a vented BOV changes the airflow (by venting it out of the system) after the computer has decided its fuel parameters. The result is a hiccuping horror show of an engine that will barely run and/or run rich when the throttle plate is closed.

Speed density systems are more predictive in their approach to engine control. The major components of a speed density system are the intake air temperature sensor (IAT) and manifold absolute pressure sensor (MAP). Engine speed, throttle position, and coolant temperature are other parameters that go into speed density calculations. An oxygen sensor mounted in the exhaust system relates combustion efficiency to the computer after the fact. The ECU takes all the data, readings, and measurements and selects one of many pre-programmed tables that represent a volumetric efficiency value of the engine. The table has a corresponding fuel table employed to run the engine. Since this system is not a closed-loop, pressurized design, losing or venting pressure to the atmosphere will not impact performance, so it can run either style of BOV.

What Exactly is a Waste-Gate?

The net effect is the turbocharger comes up to peak boost more quickly and then maintains that boost level throughout the engine’s RPM range for optimum mid-range torque and top end performance.

Turbocharging makes exceptional power on Mustangs and also can retain reliability and safety when installed in a quality manner. Recapping can be broken down into a few points: 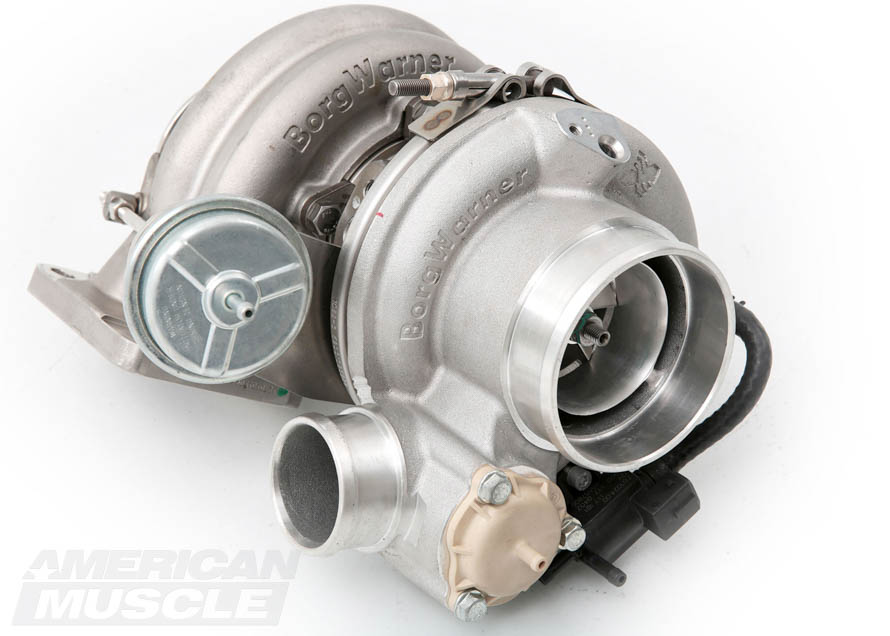 How Do I Choose?

In order to decide which set up is best for you, you need to examine your goals for your Mustang. Do you want to go with a more inexpensive kit? Are you focused mainly on drag racing? Is there only a small amount of free space under your hood? If so, a single turbo would be your best choice. On the other hand, if cost is not a big concern, you are looking for quicker spool, great low to mid range power, and an eye popping set up under the hood, twin turbos would work well for you! No matter which style you choose, your Mustang will be equipped with a powerful and efficient set up.