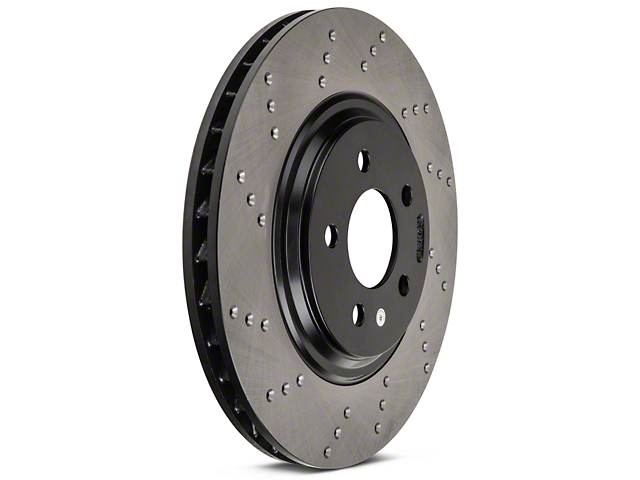 Stop Your Mustang in Style. With a set of StopTech Sport Cross-Drilled Rotors, Front Pair glistening from the wheels of your 1994-2004 Bullitt, Mach 1, or Cobra, with the added sizzle of curving rows of cross-drilling, your Mustang will have a striking customized look. Much more than an aesthetic upgrade, though, these brake rotors crank up stopping power to intense new levels with their high grip design, which prevents pad glazing, too. They’re partially rust-proofed with e-coating and won’t heat up fast enough for brake fade.

Heavy-duty Cast Iron Performance Rotors. The StopTech Sport Cross-Drilled Rotors come with a partially e-coated finish, a black layer applied with an electrostatic process to the vanes, edges, and hats. The rotors themselves are built out of 1-piece vented cast iron blanks. The cast iron features an increased carbon content for superior tensile strength and zero risk of cracking under stress. The cross-drilled holes are precision placed for maximum effectiveness.

Cool, Fade Resistant with Boosted Stopping Power. The design features of the StopTech Sport Cross-Drilled Rotors each have a contribution to make, but together, they turn the rotors into a stopping force powerhouse. Even the e-coating on the hats has its role to play, preventing rusting that can lead to lateral run-out. The vent channels pull air in through the center “eye” when they’re spinning, which flows over the metal and drains its heat. The “pull” of the air also helps the cross-drilling in cleaning brake dust, gases, and liquids off the surface of the rotor. This prevents the buildup of a layer that could lessen the friction between pad and rotor, causing lessened braking effect. With these components in place, you’ll get strong braking force without fade, and shorter stopping distances in both the dry and the wet.

Bolt On and Roll Out. The StopTech Sport Cross-Drilled Rotors are made to install readily in place of the existing brake rotors. Stock wheels and calipers function well with these rotors, as do most third-party upgrades.

Sold in a Set of Two. The StopTech Sport Cross-Drilled Rotors makes up a kit that includes (2) 12.99” cross-drilled front brake rotors.

No Warranty. The StopTech Sport Cross-Drilled Rotors is not warranted against defects, and purchase of the parts means accepting them “with all faults.” They are sold in an “as is” state, though every effort is made to provide a sturdy, high quality component.