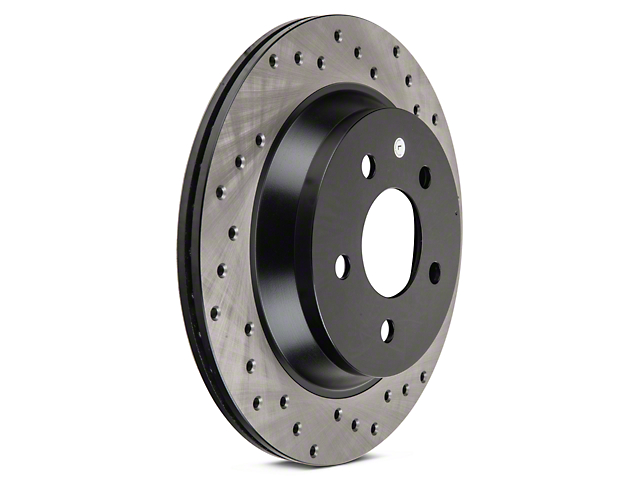 Tons of New Braking Power for your Pony. Augmenting bite, scraping the brake pad surface to forestall glazing, and cleansing the rotor surface of everything from brake dust to rainwater, the cross-drilling of the StopTech Sport Cross-Drilled Rotors, Rear Pair power up the braking strength of your 1994-2004 Mustang. Sized for the Bullitt, Mach 1, and Cobra trims, these rotors shed heat thanks to their vented design, with curving internal vanes. They’re also quite corrosion resistant thanks to an electrostatic e-coating on the hat, edges, and other places.

Handles Heat, Wet, and Brake Dust Effectively. The features of the StopTech Sport Cross-Drilled Rotors work together to produce extremely strong braking power and shortened stopping distances compared to stock, including in very wet conditions. The cross-drilling keeps the faces clean so that there’s always vigorous contact and friction between pad and rotor. The amount of gases the cross-drilling needs to deal with is lessened a lot by the cooling effect of the vents and vanes. Directionally curved to match the passenger and driver sides, the vanes spin air into the vent channels at the center and out again at the edges after absorbing heat. Running cool, resisting stresses, and braking strong are the StopTech rotors’ big advantages.

Direct Bolt-On. Fitment of the StopTech Sport Cross-Drilled Rotors can be carried out on a plain direct-fit replacement basis. They work with any wheels, brake calipers, and other components that will function with the stock brake rotors.

Provided as a Pair. The kit of StopTech Sport Cross-Drilled Rotors is made up of (2) 11.65” cross-drilled rear rotors.

Not Manufacturer Warranted. The StopTech Sport Cross-Drilled Rotors are not warranted or guaranteed in any fashion. When these components are bought, they are accepted “with all faults” and “as is,” according to StopTech company policy.