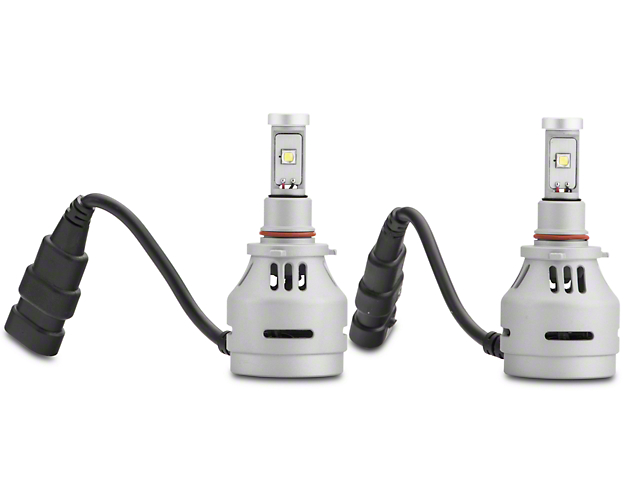 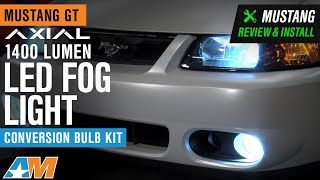 What's going on, guys? I'm Alex from americanmuscle.com, and today I'm bringing you my quick review and breakdown of the Raxiom LED fog light kit fitting your '05 through '12 GT and '03, '04 Cobra. So in this video, I'm gonna break down who this kit might appeal to, the construction and materials that went into this, what you should expect to be spending, and then we'll take a very quick look at the installation. We're gonna be looking at a very easy one out of three wrenches in the difficulty meter and about 30 minutes or less to get these onto your car. So the kit that I have here today should definitely appeal to any Mustang owner out there that's looking to overhaul their fog light system with something that's gonna be considerably more brighter, as well as giving the front end of your car a little bit more of an aggressive look. These should also appeal to the Mustang owner that's looking to be getting into something that's gonna be that much brighter. Again, like I had said, rather than running down to your local part store and mixing and matching incandescent bulbs which, can not only be a little bit more on the expensive side but I would personally guarantee you, having done this myself, that they're just not gonna be as bright as a LED kit. So in terms of the construction of this kit, we're gonna see that this is going to be an H10 configuration, as well as being a [inaudible 00:01:08] plug and play compatible kit, which we'll talk about a little bit later when we get the install. So externally, we're gonna see that this is gonna feature a fully waterproof aluminum housing, so you're not gonna have to worry about anything down the road in terms of this taking on water and malfunctioning. Internally, we're gonna see that this kit is gonna feature Cree XM-L2 LED chips, as well as having a self-regulated housing. Now, if you're unfamiliar with Cree, if you've ever picked up an LED flashlight previously, chances are that they're gonna feature a Cree LED chip, which I can personally attest to being incredibly bright as I've got one right here in my own hand.All right, guys, so one last thing that I definitely like about this kit and specifically LEDs in comparison to an incandescent bulb, is that they're gonna run that much cooler and longer, and not only that, they're gonna be brighter than your standard bulb. All right, so switching gears and looking into the pricing here, you should expect to be spending only about 100 bucks for this kit, and in my opinion, it's definitely very aggressive. Again, at the end of the day, you're gonna be picking up that much more light output, as well as making the front end of either your GT or Cobra look that much more aggressive. Now, weighing this in comparison to picking up some incandescent bulbs down from your local store, I think this is gonna be that much more of a better buy as if you're gonna be mixing and matching bulbs right off the shelf. I personally guarantee you that any type of incandescent bulb is not gonna throw that much light as these would, as well as being not that aggressive-looking. So in terms of the installation, just like I had said at the beginning of the video, you're gonna be looking at an incredibly easy one out of three wrenches in the difficulty meter and less than 30 minutes to get these onto your Mustang. Now, given that these are gonna fit two different models, the '05 through '12 GT, as well as the '03, '04 Cobra, they're definitely gonna install a little bit differently. So for the '03, '04 Cobra, guys, you're gonna be looking at a couple of minutes here, honestly. And it's gonna be as simple as essentially reaching down, pulling the plug out, swapping it with this unit and you're good to go. Now, for the '05 through '12 GT, guys, it's gonna be a little bit more labor intensive but nothing nuts here. You're essentially gonna be cracking your hood, pulling your rag cover by means of getting a plastic pry tool or a flathead screwdriver. And then once that cover's off, you're gonna be staring right at your fog lights, where again, it's gonna be literally as easy as pulling them out and then swapping them back with the Raxiom unit and you're good to go.All right, so just to wrap things up here, some final thoughts. If you're the Mustang owner that's gonna be looking to not only improve your fog light output, as well as getting a little bit more of a modern and aggressive look with some incredibly bright LEDs, this is definitely gonna be the kit for you.So that's my quick review and breakdown for the Raxiom LED fog light kit fitting your 2005 through 2012 GT and '03, '04 Cobra, available right here at americanmuscle.com.

Bright White LEDs. Ditch those factory halogen bulbs for something brighter, longer lasting and more stylish. With the simple swap of your fog light bulbs, your Mustang will not only look more modern, but you'll be able to see the road much better when you need it most. This pair of Axial H10 Replacement Fog Light Bulbs feature high quality LED diodes that deliver a 6000K crisp, bright white light.

Reviews of Axial Lights products have an average rating of 4.5 out of 5