How to Install BBK Adjustable Clutch Cable (79-95 5.0L) on your Ford Mustang 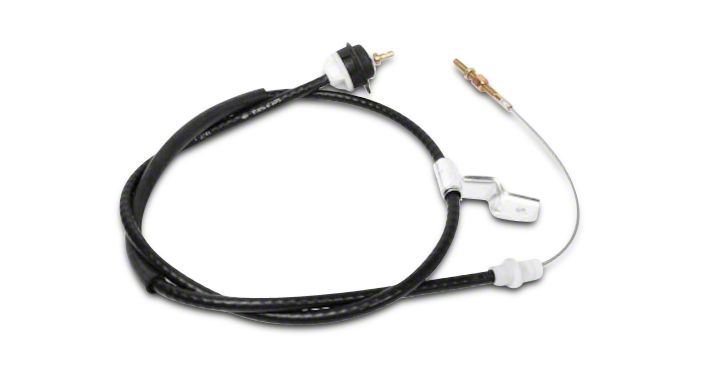 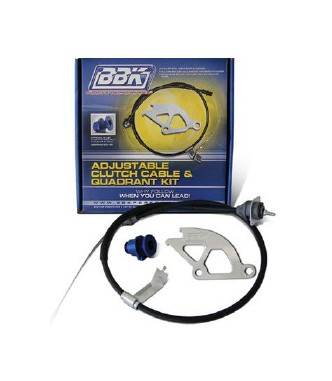 Follow these instructions carefully to ensure correct fitment and operation.

STEP 1: Raise the front of the vehicle and place on jack stands. Remove the clutch cable inspection cover on the side of the bell housing.

STEP 2: Using a large screwdriver or pry bar, pry the clutch fork forward and slip the cable end through the large hole in the fork. This disengages the cable from the clutch.

STEP 3: Remove c-clip from the collar of the cable (located where the cable slips through the bell housing).

STEP 5: Working from under the dash board on the driver’s side, remove the cotter clips from both shafts. Using a screw driver, pry the large quadrant piece off of the shaft and discard along with the spring attached to it.

STEP 7: To remove the pawl gear, first pull the carpet back until you can put the clutch pedal all the way to the floor. Position pawl gear on its shaft by rotating it, slip a large screwdriver or pry bar under the pawl gear and across the quadrant shaft and push downward (toward the floor of the vehicle). A large amount of pressure may be needed to pry the gear and sometimes actually breaking it, which is okay because whatever is left of the gear will easily slide off the shaft.

STEP 8: Bring the clutch pedal back down to normal position and install the BBK Aluminum Quadrant so both shafts slip through the 2 holes in the quadrant. Using a screwdriver or pry bar, pry the quadrant over the 2 shafts evenly and far enough to allow the installation of the 2 cotter clips.  ​ 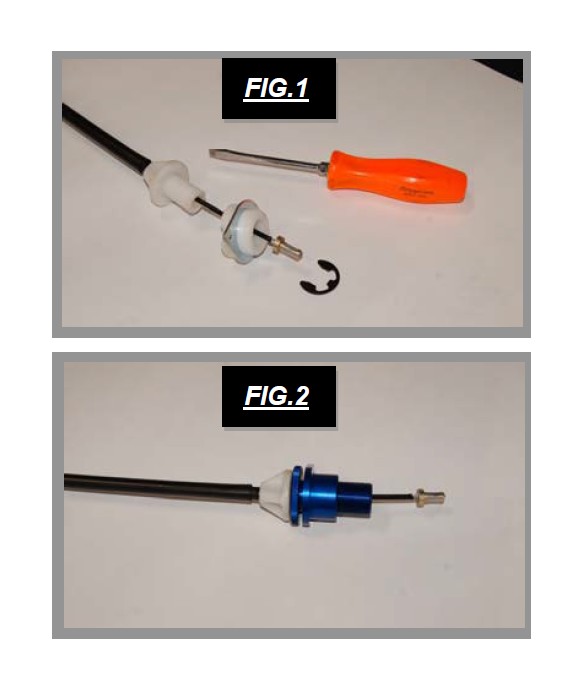 • Remove the E-Clip from the end of the new BBK Clutch Cable. FIG.1

• Remove the plastic ring that has the steel mounting ring attached.

• Feed the clutch pedal end of the cable and housing into and through the BBK firewall adjuster. FIG.2

• From under the dash, position the cable end onto the clutch quadrant.

STEP 11: Re-install the cable inspection cover. (Sometimes the cover will have to be clearance as not to come into contact with the adjustable end of the cable).  ​