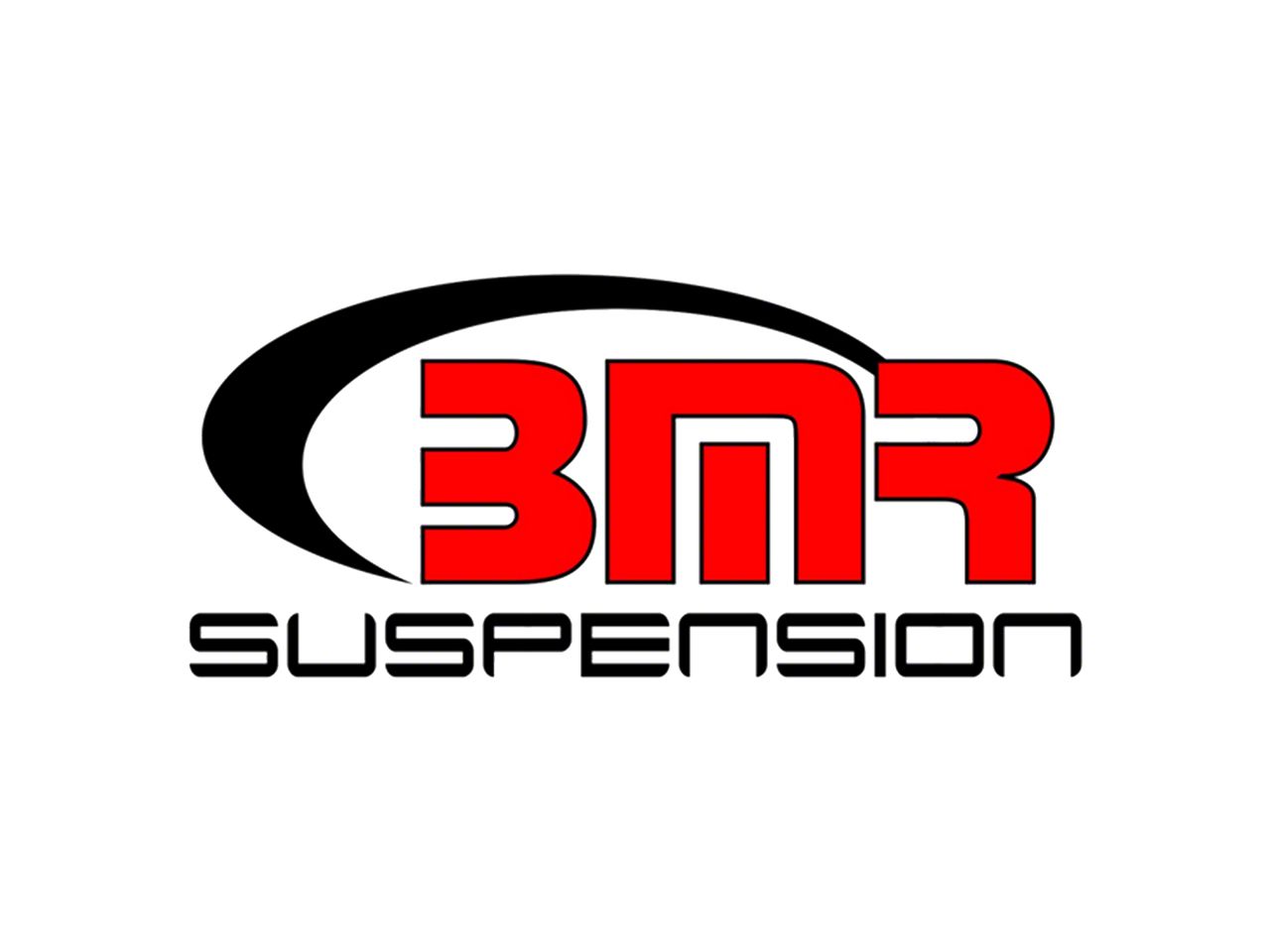 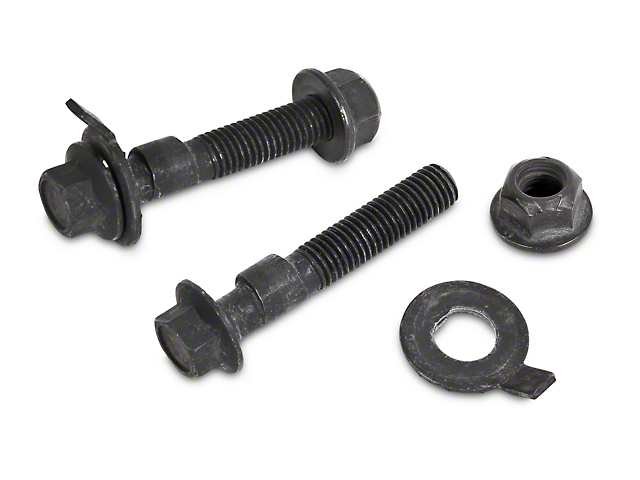 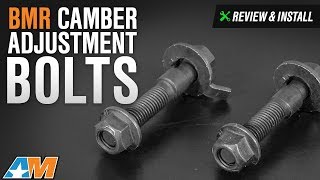 Hey, guys, Adam here with americanmuscle.com. Today, I'm bringing you a quick overview of the BMR camber adjustment bolts, available for all 2015 and newer Mustangs. So in this video, I'll be going over the functionality and purpose of the BMR camber adjustment bolts, and I'll even let you know when it's a good time to pick them up for your S550. I'll top the video off with the install, which I'll let you know up front gets a two out of three wrenches on our difficulty meter. Now the install of the bolts themselves are relatively easy, but once you do have them installed, you'll have to get them degreed, which is definitely something you have to take it to a shop for to get put on an alignment rack.The BMR camber adjustment bolts will be for any 2015 or newer Mustang owner who's looking to perfect the alignment on their S550 and get the best handling results possible, especially useful for the guys out there with a lowered S550 and wanna eliminate the excess tire wear and poor handling. Camber adjustment bolts, like the ones from BMR we have here today, will be specifically for the guys out there with lowered S550s, or the guys out there who are looking to pick up a set of lowering springs in the near future.Now, typically, when you lower the center of gravity on your S550, or any generation of Mustang in general, you start to throw off the adjustment and the alignment little by little on the front of your car. So once you do that, the BMR camber adjustment bolts will come into play and set everything back into perfection. Now, if you've got it lowered anything less than like an inch, you can probably get away without it, but it's typically recommended to pick them up just to be safe. Anything from an inch to an inch-and-a-half or more, you're definitely gonna need a set of camber adjustment bolts, or maybe even a set of caster camber plates to be even safer.So once you throw off the alignment on basically any car, in general, you start to notice a domino effect of things that go wrong, starting off with the handling performance. Now, typically, that's the first thing you'll notice because your car will start to pull harder to one side or the other, little by little, which can get very annoying. We've all been there at one time or another. So camber adjustment bolts can come in and correct that issue right away.So the other thing you'll start to notice with an uneven alignment is the fact that your tires will start to wear down unevenly. Now, when your wheels are set out of alignment, they're gonna be angled a little bit off, so that corner that it's sitting on more than the others will start to wear down a lot faster. Once that starts to happen, it can become pretty unsafe to drive on. I, myself, have driven on a pretty poor alignment, and I left it to the point where it actually started to pop my tires. Obviously, not a good idea, especially if you're doing a lot of highway driving. So BMR camber adjustment bolts can correct the issue. So if you've got a lowered Mustang, you already know that's gonna start to happen, so it's better safe than sorry to actually get it done sooner rather than later.Now, once you get these bolts installed, you are allowing for plus or minus two-and-a-half degrees of adjustability. Now, depending on your setup and how much adjustment you really need, how low you're going with your ride, you might need a little bit more than that, in which case, caster camber plates are what you're gonna want to pick up. Now, if you're not going too crazy on the lowering springs and nothing too crazy on the drop, BMR camber adjustment bolts are probably gonna be what you need. This is something constructed from a high-strength steel for superior durability and rigidity, topped off with an oxidized black coating to resist rust.Now, as far as the pricing goes, if you're interested in the BMR camber adjustment bolts, you can pick up this particular set for $30. All you'll need is this one set, two bolts included in the kit, one for each side of the front of your Mustang. The rears will not need them. Now, with that said, if you need a bit more than just these camber bolts, you might need caster camber plates, depending on your setup. If that's the case, $200, maybe a little bit more for the caster camber plates. Again, depends on your setup, but the bolts should do the trick.Now, shifting gears over to the install portion of the video, if I was strictly talking about the install of the bolts themselves, that gets a one out of three wrenches on our difficulty meter. But, because once you get these installed, you have to get it set on an alignment rack and degreed properly, if you have an alignment rack, you're gonna give it a two out of three wrenches on our difficulty meter. Otherwise, you gotta take it to a local shop to get it done properly by a professional.Well, just to wrap things up here, if you're the owner of a 2015 or newer Mustang and you're adding a set of lowering springs to your S550, and you're throwing off your alignment, you're trying to get it back into spec, you might wanna check out the BMR camber adjustment bolts, which are available right here at americanmuscle.com.

View Full Transcript
Adjustable Camber Bolts. Whether you spend your time tearing up the track or just cruising down narrow back roads, a proper front end alignment is required for optimal handling performance. These BMR Suspension bolts feature a unique cam lobe design that will allow you to adjust your front alignment camber by +/- 2.5 degrees. A correct alignment not only improves the handling of your S550 Mustang, but also saves wear and tear on your tires.

Ideal For Lowered Mustangs. If you have lowered your 2015 to 2020 Mustang, you may have trouble getting your suspension geometry back line. A poor front end alignment will result in accelerated tire wear and less-than-stellar handling. However, a pair of BMR Camber Bolts will give you the extra adjustability you need to get your dropped Mustang back into spec.

Superior Construction. BMR proudly designs and manufactures their Adjustable Camber Bolts right here in the USA. These BMR Camber Bolts are forged from high-strength steel for superior strength and rigidity. BMR then completes their Bolts in a durable black oxide finish for aggressive good looks and long lasting corrosion resistance.

Application. This pair of BMR Suspension Camber Adjustment Bolts are designed for use on all 2015 to 2020 Mustangs, including the V6, EcoBoost, GT and Shelby models. Sold as a set of two Camber Bolts.

Do u install these on the top slot or bottom slot of the strut that connects to the spindle?

How many BMR camber adjustment bolts go one each side? I just lowered my car 1 inch. Will these help out with the alignment to get back to factory specs. Thanks.

If you're getting caster camber plates, would these matter? Not sure if these are meant to work in conjunction with plates, or if using plates would cover the same function as the bolts as well.

Can these also be used for the rear when I put the eibach springs on?

What would you recommend if I’m getting Eibach Sportline springs and 25mm spacers on front and back on my 2018 performance pack GT? 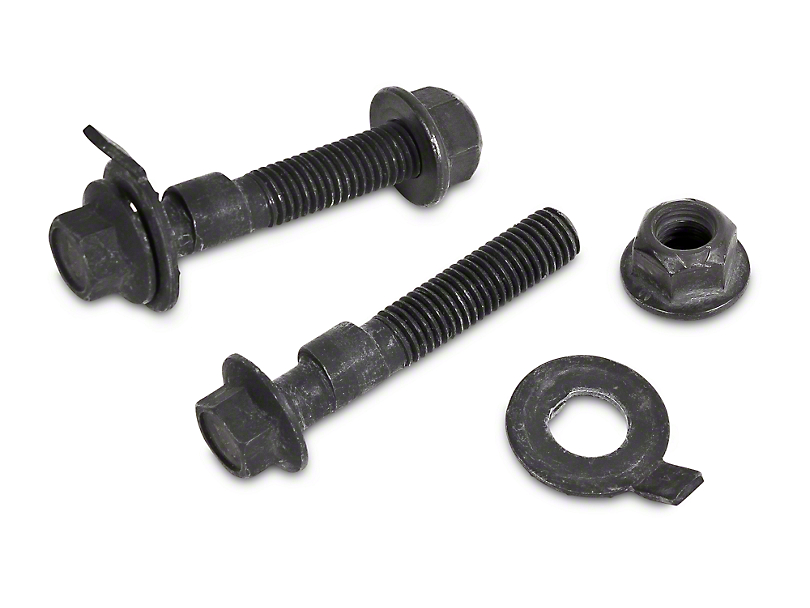