Most Popular in Mustang Catch Cans

Catch Cans: Keeping the Oil Out

Not all engine mods are simple. Especially ones that lessen the risk of a high horsepower build from blowing itself up. With catch cans, they're both simple to install, and will help keep your engine turning despite big power mods.

Oil in your intake is never a good thing. The combination of modern PCV systems and high performance engines (particularly forced induction) increases the chance of sucking oil into the intake. A simple solution? A catch can.

Why Do I Need a Catch Can?

Mustangs, amongst other vehicles, utilize a positive crankshaft ventilation system, or PCV. The PCV system helps alleviate combustion pressure from an engine’s crankcase by using engine vacuum to suck the pressure out of the crankcase. Once the air pressure is drawn out of the crankcase, it is reintroduced into the intake charge as it enters the engine. While PCV systems play an important role in engine operation, (such as reducing emissions) they do create a negative side effect, particularly in high-performance applications.

As PCV systems suck the pressure out of the crankcase, it also draws out a fine mist of oil which is then included in the air/fuel intake charge. Although you might not notice any performance loss in a stock engine, the excess oil included in the intake charge can lead to reduced combustion, fouled spark plugs, detonation, a dirty throttle body/intake manifold, and it can even lower the octane of the fuel.

A catch can is designed to stop oil from traveling all the way through the system and storing it in a can. It separates out the contaminated oil from the blow-by exhaust gases before being recycled back into the intake to be re-burned. This prevents the used oil from re-entering the system to gum up your engine. The captured oil is safely stored in the catch can until it can be properly disposed of during your next routine oil change. It’s an inexpensive option to keep the engine in top shape, and it's never a bad idea to invest in a catch can.

The diagram below illustrates the basics of how a catch can works. The purple arrow represents the air/oil blow-by mixture coming in from the crankcase. It enters the catch can where the oil is collected at the bottom. The air is forced through a media, which filters out additional contaminants, before exiting the catch can as cleaned air (green arrow) to be re-circulated back into the intake manifold.

How Many Catch Cans Do I Need?

On S197 (5.0L) and S550 models, the primary side that needs a catch can is the passenger side. For the 4.6 3-valve engines (2005-2009) the primary side is the driver’s side. Having one on the opposite side is not a bad thing. However, there isn't much need for the little amount of blowby it has. It wasn’t a real concern unless your Mustang has a supercharger. In the past, on a stock engine a catch can wasn’t really needed as the blowby was very minuscule. On the contrary, with the release of the new 5.0 engines, in stock form they are still a huge asset to one’s build. A completely stock 5.0 has a decent amount of blowby, enough to where a catch can is highly recommended. 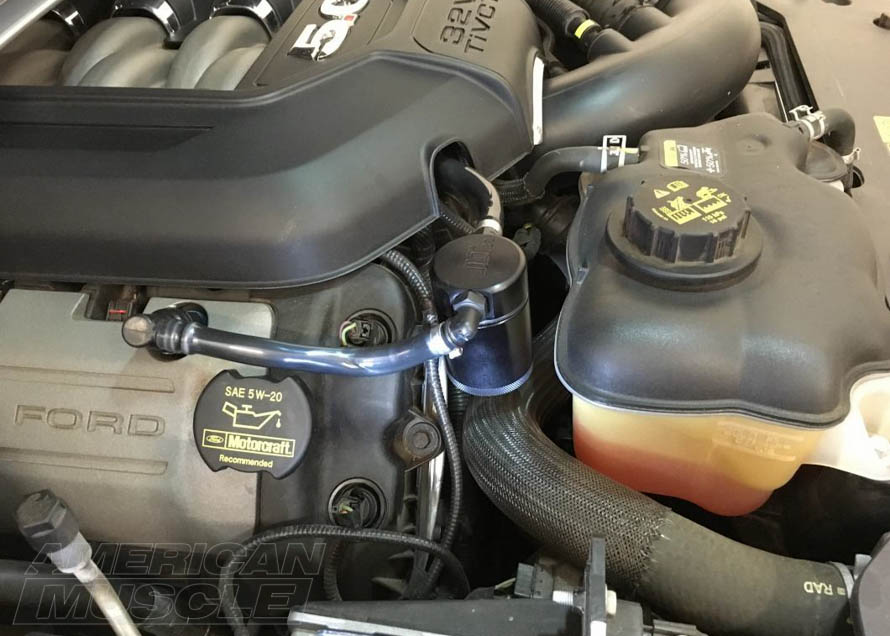 Blow-by is a combination of unburned fuel, exhaust gases, and oil that escapes from around the piston rings during the combustion process and enters the crankcase. This oily vapor is vented out of the crank case via a PCV (Positive Crankcase Ventilation) valve to be re-circulated back into the intake manifold. If these blow-by gases were not ventilated out of the crankcase, a number of issues could develop including a gasket leak (a blown gasket), contamination of your engine oil or even internal rust due to the moisture content.

Wouldn't a Breather Do the Job?

A breather is basically a cap that goes on the valve cover on the PCV end. Rather than have any fuel go back through the system it allows the pressure to be relieved by letting the gases evaporate through a filter. In order to prevent a leak on the intake side,when utilizing a breather, the intake must be capped off. It has a few downfalls though. The main one is that it gets the engine bay quite dirty. It also can give a smell of oil/raw fuel. Filters have to be replaced when no longer effective while a catch can simply has to be emptied and reconnected.

Is a Tune Needed? How Hard is the Install?

The beauty of a catch can is it’s such a simple modification. No aftermarket tune is needed, and if you have a tune it does not need to be retuned. Installation takes all of 5 minutes; it’s as easy as disconnecting and reconnecting a hose. Checking the catch can should only take a few minutes from opening to closing the hood.

In review, here are the quick things needed to know for a catch can:

If Your Throttle Body is Sticking or Rough Idling

If your Mustang is running rough or idling poorly, it could be caused by a buildup of gunk in the intake. This gunk is an oily by-product of “blow-by” which can cause your Mustang’s throttle body to stick open, creating a host of intake related problems. An easy and inexpensive way of preventing this nasty oily build up from happening is by installing an air/oil separator a.k.a. catch can. The image below is a prime example of what “blow-by” can do to a vehicle's throttle body. 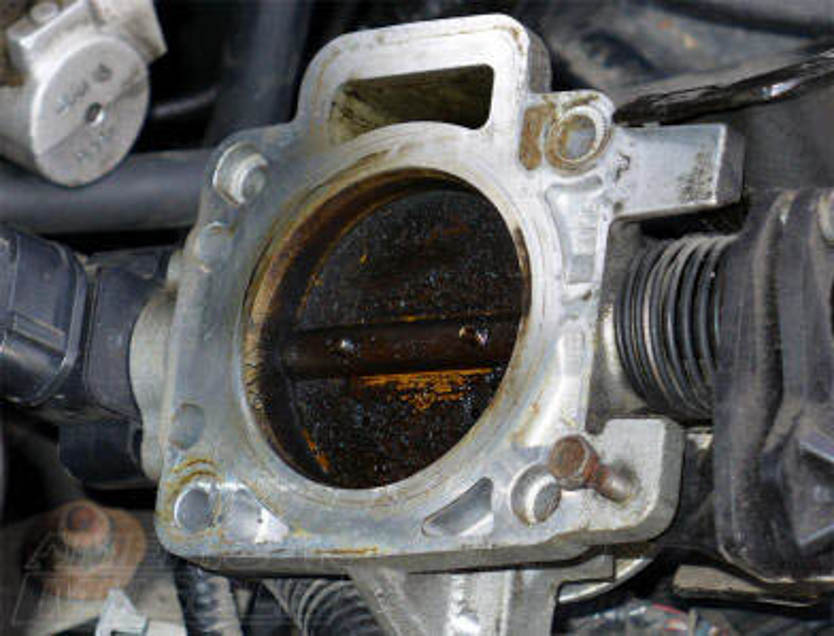