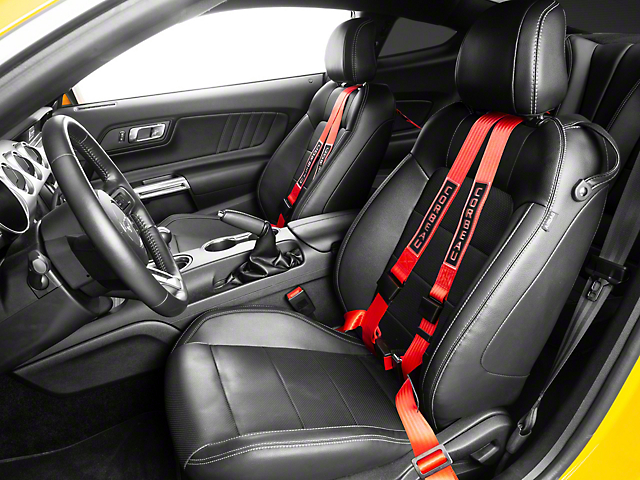 Comfort Meets Style. Often, when you try to install a harness in your 1979-2021 Mustang, it turns out to be extremely uncomfortable and not at all stylish. However, with Corbeau's Red 2 in. 3-Point Bolt-In Harness Belt, you'll get a finish that comfortably holds you and your passengers safely in your seats while also adding a flair to your car's interior.

Bright Red Accent. Boasting a pressure-reducing waist pad and an easy release button, the belt is certainly built with comfort and ease in mind, yet it also features a bright red color and aggressive logo stamps that give your Mustang a fantastic look. Most importantly, the belt includes a 3 point design which ensures you and your passengers remain safe while on the street and the track.

Lasting Performance. Thanks to its 2 in. wide red military grade nylon webbing, the Red 2 in. 3-Point Bolt-On Harness Belt by Corbeau will keep you safe for a long time to come. The construction is unbelievably durable and can stand up to the most difficult conditions that you come across.

Warranty. If you have any problems with the craftsmanship or quality of the belt, check out its 1-year limited warranty to see if it applies to you.

Installation. Featuring a bolt-in mounting system, Corbeau's Red 2 in. 3-Point Bolt-In Harness Belt can be secured into place in just 45 minutes. Simply attach the ends of the belt's straps to your mounting location.