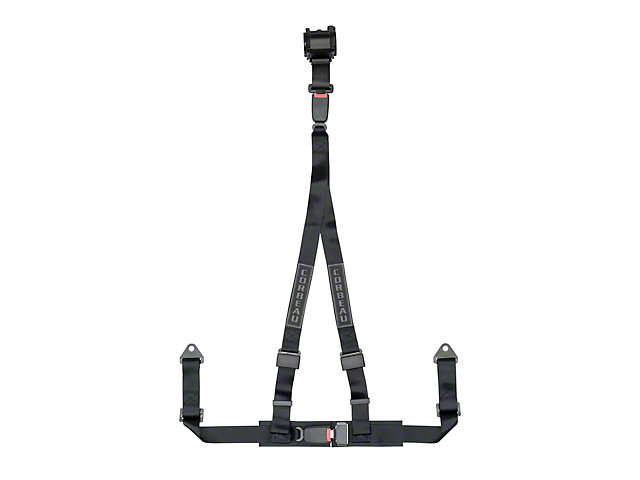 Three Point Harness. Installing a new set of Corbeau Race Seats in your Mustang is great for additional comfort and support, now upgrade your seat belts for additional safety with a Corbeau 3 Point Retractable Bolt-In Harness. A three point harness will keep you securely behind the wheel while you're carving corners.

Retractable Inertia Reel. This Corbeau harness is designed with an OE style inertia reel that allows it to retract and to lock up under sudden movement, just like a standard seat belt. It also has the added benefit of an on-off switch, which allows you to turn off the retracting option so it will function as a full time harness.

Comfort And Ease Of Use. All 2" wide Corbeau harness belts are equipped with a pressure reducing waist pad to provide the driver with extra comfort and support. The Retractable Harness Belt features a Push button release buckle for easy disengagement. But also has a double release feature, which allows you to disconnect the front shoulder straps from the rear tail strap.

Bolt-in Design. Corbeau designed this 3 Point Harness to have the rare ability to be bolted to the factory provided mounting points. Meaning in most installations no modifications or drilling is required, this harness just bolts right in.