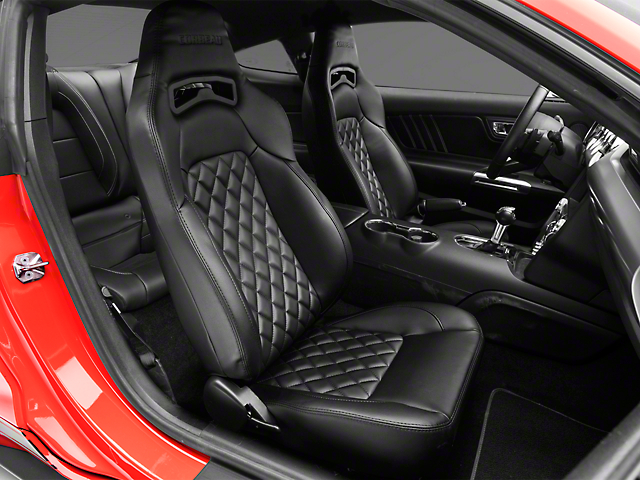 In Stock
Sorry, please enter a valid US or CA postal code
We're sorry, zip can't be updated at this time.

Top-of-the-Line Seating. Corbeau's latest and greatest is here, and its name is Trailcat. With a premium vinyl feel and a performance-ready design, these Trailcat Seats make sure you get to your destination in style and comfort. The black diamond pattern creates a great eye-catching appearance, that also feels great to sit in. The strategically-placed kidney and low thigh bolsters mean that you'll stay securely in place and won't have any problems getting in and out of your seat. Best of all these Seats are fully recline-able for maximum comfort and convenience.

Harness-ready. These Corbeau Seats not only add impressive good looks to your Pony's interior, but they are functional as well. Corbeau designed their Trailcat Seats with a pass-through for your racing harness, making them ideal for Mustangs that see use on the street and at the track.

Standard Size. These Corbeau Trailcat Seats are the standard size option for drivers with a waist size of 38" to 40 inches.

Superior Construction. Corbeau constructs their Trailcat Seats using a strong lightweight tubular frame for superior strength and rigidity. The Seats injection molded foam padding is covered in a high quality, vinyl material that features a diamond pattern in black stitching. These upholstered seats not only look great, but they will be able to take the abuse from everyday use.

Required Upgrade. Installation of these Corbeau Racing Seats will require the use of new seat brackets – sold separately. Please note seat brackets are year-specific. Select your application from the options listed above.

One-Year Warranty. The superior craftsmanship from Corbeau comes with a one-year limited warranty against materials and workmanship. Corbeau is the last word in amazing seating for your Mustang, so they will replace any problems found in the limited one-year period.

Application. These Corbeau Trailcat Diamond Pattern Seats with black stitching are designed to fit all 1979-2020 Ford Mustang models. These Corbeau Seats are sold as a pair - one driver's side seat and one passenger's seat.