Most Popular in Coyote Engine Parts

Coyote Swap into a Fox 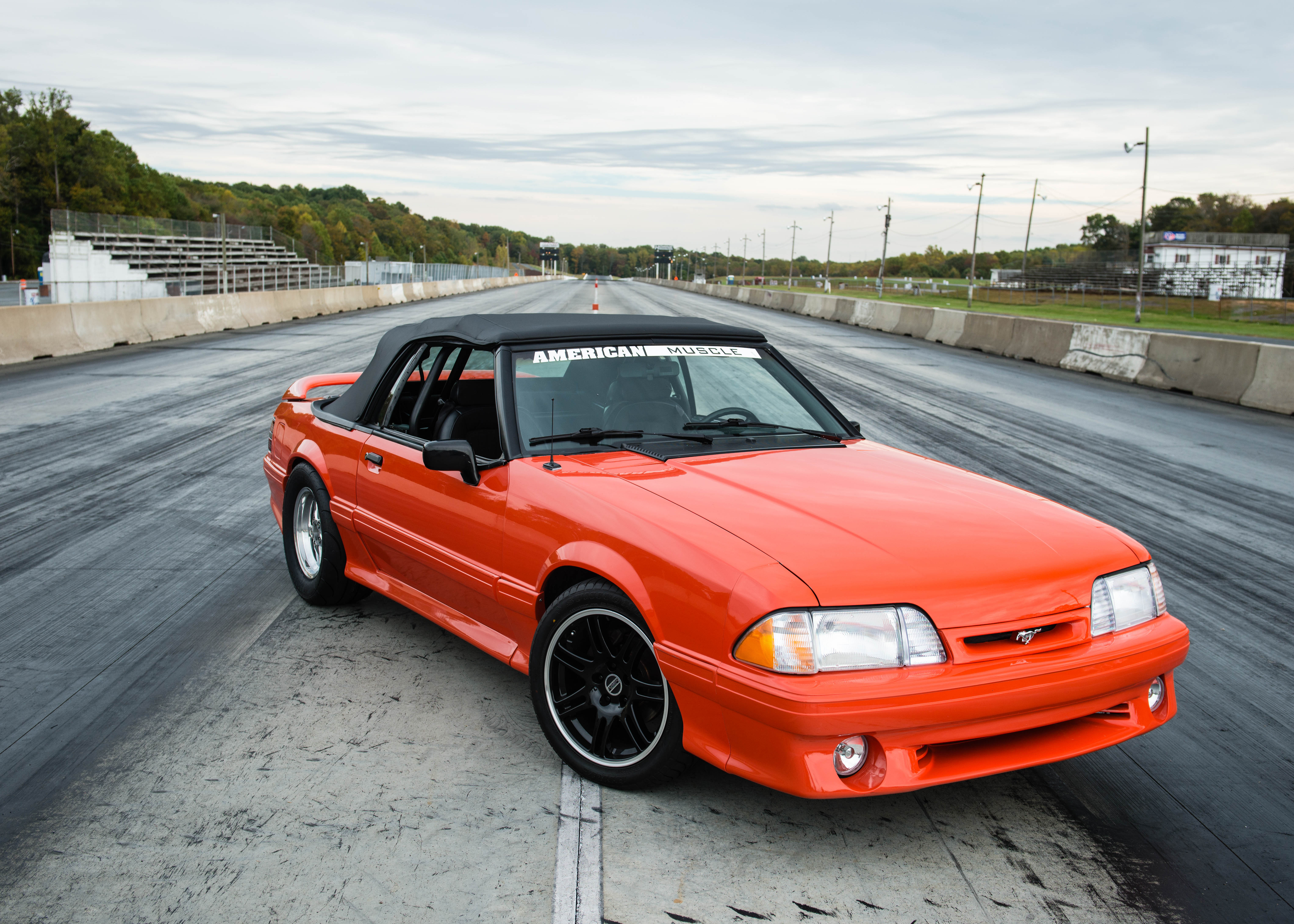 If you’re looking to inject some modern-day power into your old-day Foxbody Mustang, consider swapping the newest generation 5.0L engine into your Fox. Ford has developed an extensive catalog of aftermarket parts so that Mustangs of yore can enjoy this motor of new.

Outfitting your Foxbody with a Coyote engine doesn't have to be daunting. With the right kits, you'll have that much less to worry about.

Swapping in the Coyote – What You’ll Need

The new Coyote engine, although sharing the same displacement as the older 302 pushrod, is physically much larger. It is a completely different engine than the Windsor 302 and therefore more complicated to install. Special components and potentially minor fabrication will be needed to get the Coyote to fit and run properly inside the narrower Foxbody-style Mustangs. It is important to note, however, that there isn’t a singular, guaranteed or easy method to making this conversion work. There are a few different ways to get a Coyote into a Fox. Some methods require more extensive fabrication and less parts, whereas another method may use more custom swap parts and need less fabrication.

Getting the harness to work 100% with stock gauges can be more complex than first imagined. There is a decent amount of splicing, soldering, and trial and error in getting the gauges to work completely properly. For the most part, unless going for a complete 100% interior look, it is regarded as easier getting new gauges. If you have a manual transmission, replacing the harness should be little to no issue in conjunction with the ford racing control pack (FRPP). An automatic transmission can be utilized as well, however, a stand alone system will have to be used. The Ford racing control pack was designed for use with manual transmissions. As a result, automatics need a stand alone system since it lacks the capability in the stock PCM.

In short, the Coyote engine utilizes a completely different and specific engine control unit for it to function properly. Swapping the Coyote into any car requires an FRPP control pack. This control module contains all necessary relays for the engine, simplified wiring, an integrated PCM, throttle pedal, airbox assembly, MAF and oxygen sensors.

Another big change is the throttle pedal. The Coyote uses a drive-by-wire throttle system, and requires the use of a drive-by-wire pedal. Furthermore, an additional bracket will be needed to mount said electronic pedal at the correct angle in a Fox Mustang.

Another area to watch out for is the stock airbox/MAF sensor. The Coyote is very picky as to where the MAF is located, and incorrect placement could lead to drivability issues. This is compounded by the fact that it is often very difficult to utilize the stock airbox assembly in the Fox engine bay, as there isn’t always room. If the MAF has to be relocated, the PCM will need to be re-tuned. 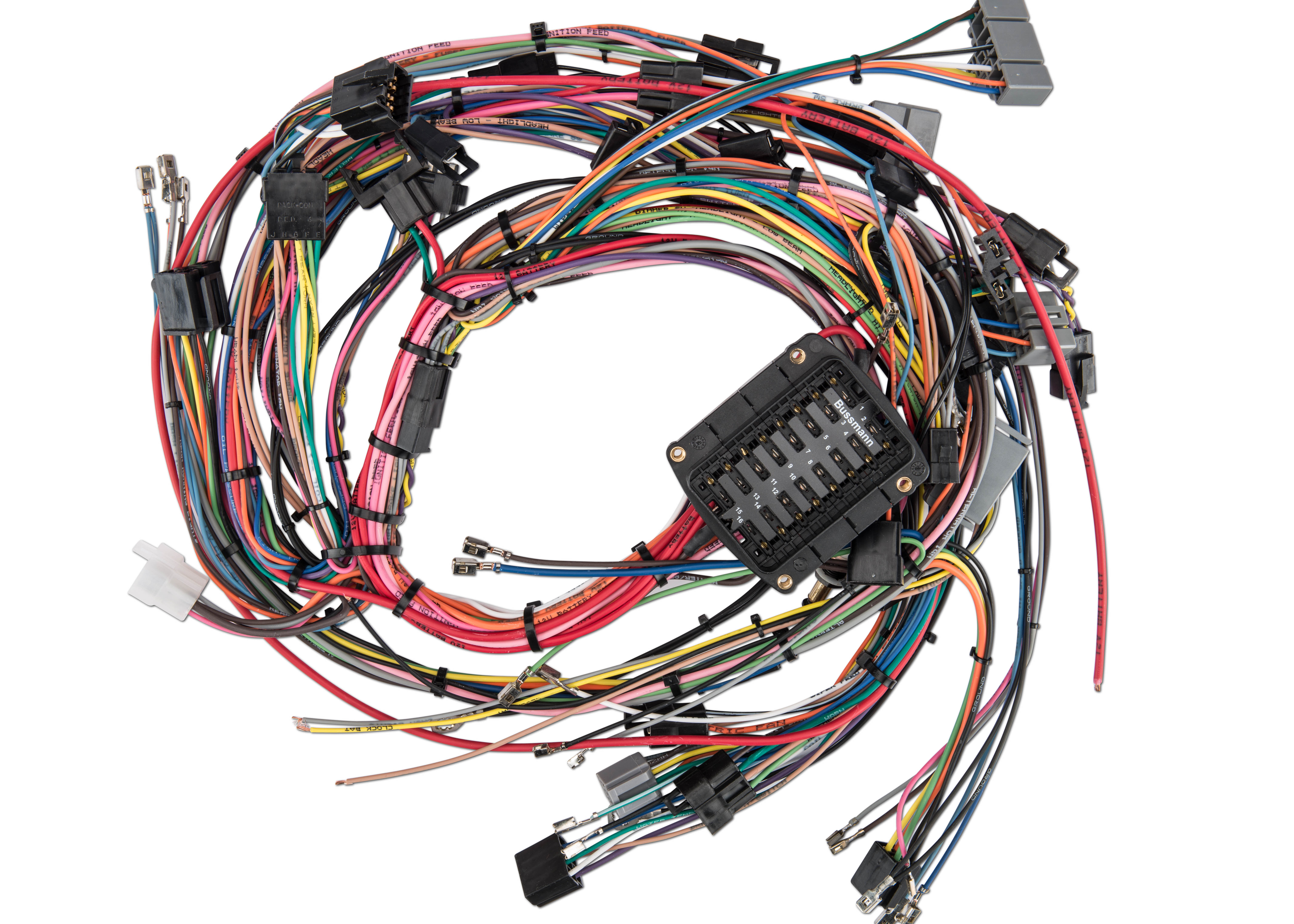 The main problem with the exhaust is getting the headers to fit without interfering with anything else. Most Coyote swaps utilize specific Coyote-Fox swap long tube headers. These aftermarket headers are designed solely for the purpose of fitting a Coyote into a Fox Mustang. However, often times the use of these headers also requires purchasing and installing an aftermarket tubular K-member (which is a great addition, just more costly!). A Terminator style K-member is a very popular choice. If you are planning to retain the stock K-member and make it work that way, you’ll need swap specific motor mounts to accommodate the larger engine.

It has been made possible by some shops to use the stock headers that come with the DOHC 5.0L. However modifications will need to be made to the headers themselves, to the stock Foxbody K-member, and to the floor pans in order to fit. 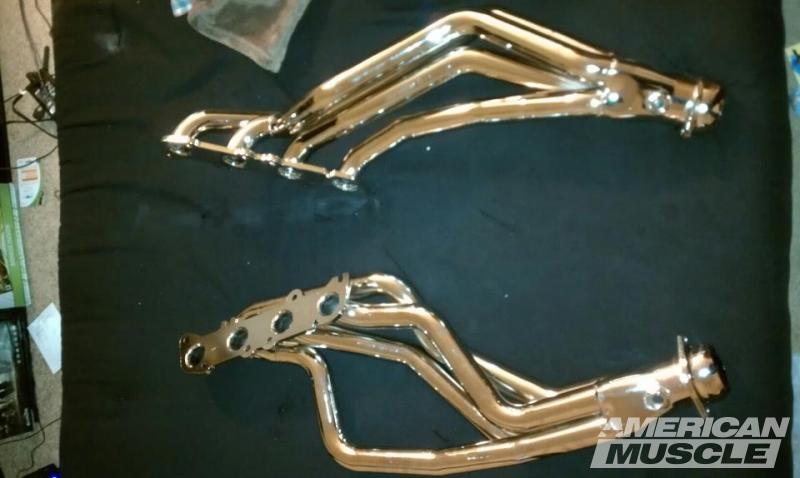 As far as engine accessories go, this unfortunately a scenario where you have to play it by ear. Depending on how your crate motor is configured upon order. New Mustangs are equipped with electric power steering pumps. A specific power steering hose is needed to plumb into the stock Foxbody steering rack (and also when hydroboost brakes are being used – see the brake section below).

Additional aftermarket brackets may be needed to relocate the AC pump depending on your exact configuration.

In the exhaust section we mentioned swapping the K-member to a tubular design. This needs to be done if using swap long tube headers. Furthermore, said aftermarket K-member will need to be configured with 4.6 motor mounts. A Terminator style K-member is a very popular choice.

If you are planning to retain the stock K-member and make it work that way, you’ll need swap specific motor mounts to accommodate the larger engine.

The stock sway bar will not clear the alternator or the oil filter. In this case the solution is simple; install SN95 sway bar mounting brackets to lower the stock swaybar and clear the accessories. 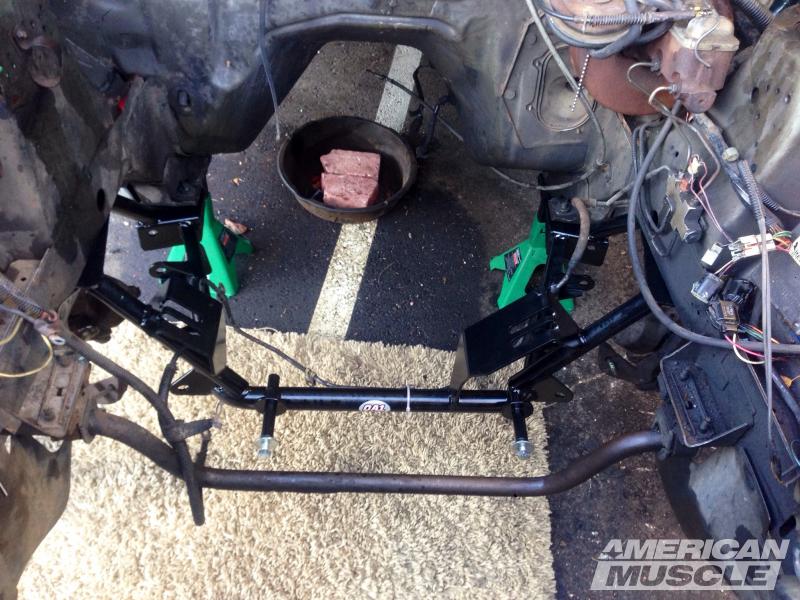 The same when you swap the 302 for a 351W, the Coyote engine requires a different oil pan than what comes with it. A Moroso or Canton rear sump quart swap pan has been designed precisely for this purpose.

Furthermore, some people claim that the stock length filter did not clear the sway bar. In this case, you can use a shorter filter, or an aftermarket remote oil filter relocation kit. 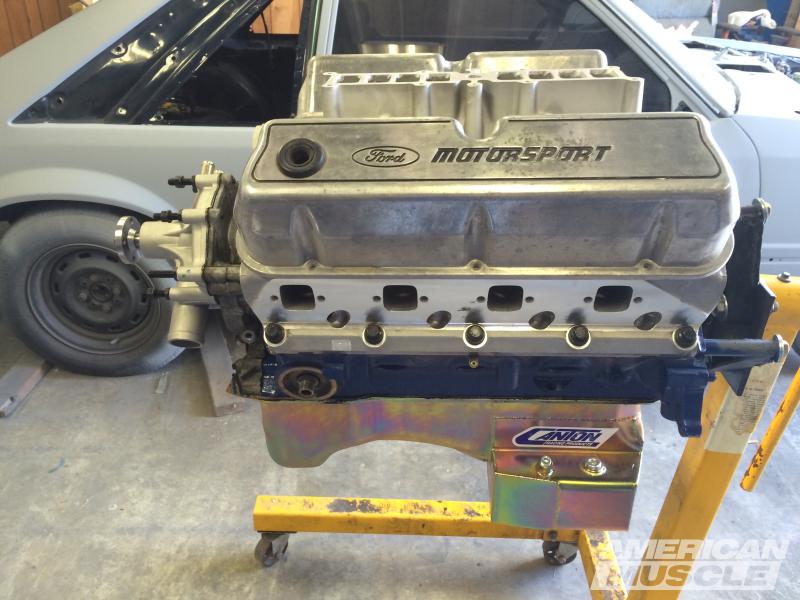 Due to the sheer size of the Coyote motor, the original Fox brake booster will have to be removed to accommodate the new engine. In this case, a hydroboost system will have to be plumbed in – or option number 2 is to go with manual brakes.

What Transmission Can I Use for the Coyote Engine?

The beauty of the modular engine is transmissions that bolt up to other modular engines will bolt up to the coyote. The issue generally becomes having the physical space. The easiest by far is to stick with the stock T5. However, this isn’t really a wise choice seeing as a T5 is nearly underrated to handle the original 302, and that was only pushing 225HP. In the event you do stick with the original or an upgraded T5, all you need is an adaptor bell housing available from Quicktime. The more popular choice is to upgrade to a TKO or Tremec style transmission.

As far as automatic transmissions are concerned, while still utilizing a modular bolt pattern, the most common automatic swap for a coyote is a 4R70W. This is primarily because stand alone systems exist for this particular transmission which can take quite a bit of abuse. This smooths coordination between the two major parts while fitting into a Foxbody with ease. 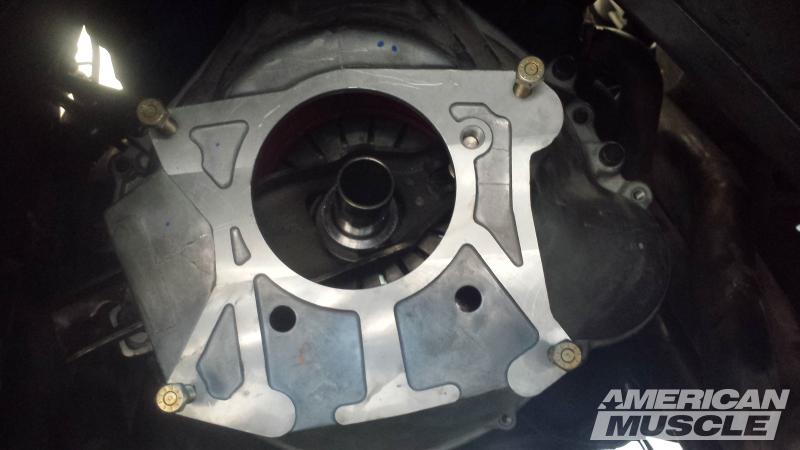 What Other Systems Do I Need to Change with the Swap?

At the End of the Day

All in all, a Coyote swap is a great way to introduce modern power, reliability and economy into an older Foxbody. However, it is nothing like a direct drop-in swap that was commonly done with 351W’s. Again, the Coyote engine is completely different. There isn’t really anything the same between the old 5.0L and the new one, apart from the displacement of 5.0L. Doing this swap is going to take a good amount of work. However, when correctly done, the feeling of 420HP in a 3000lb car is sure to put a huge smile on your face! 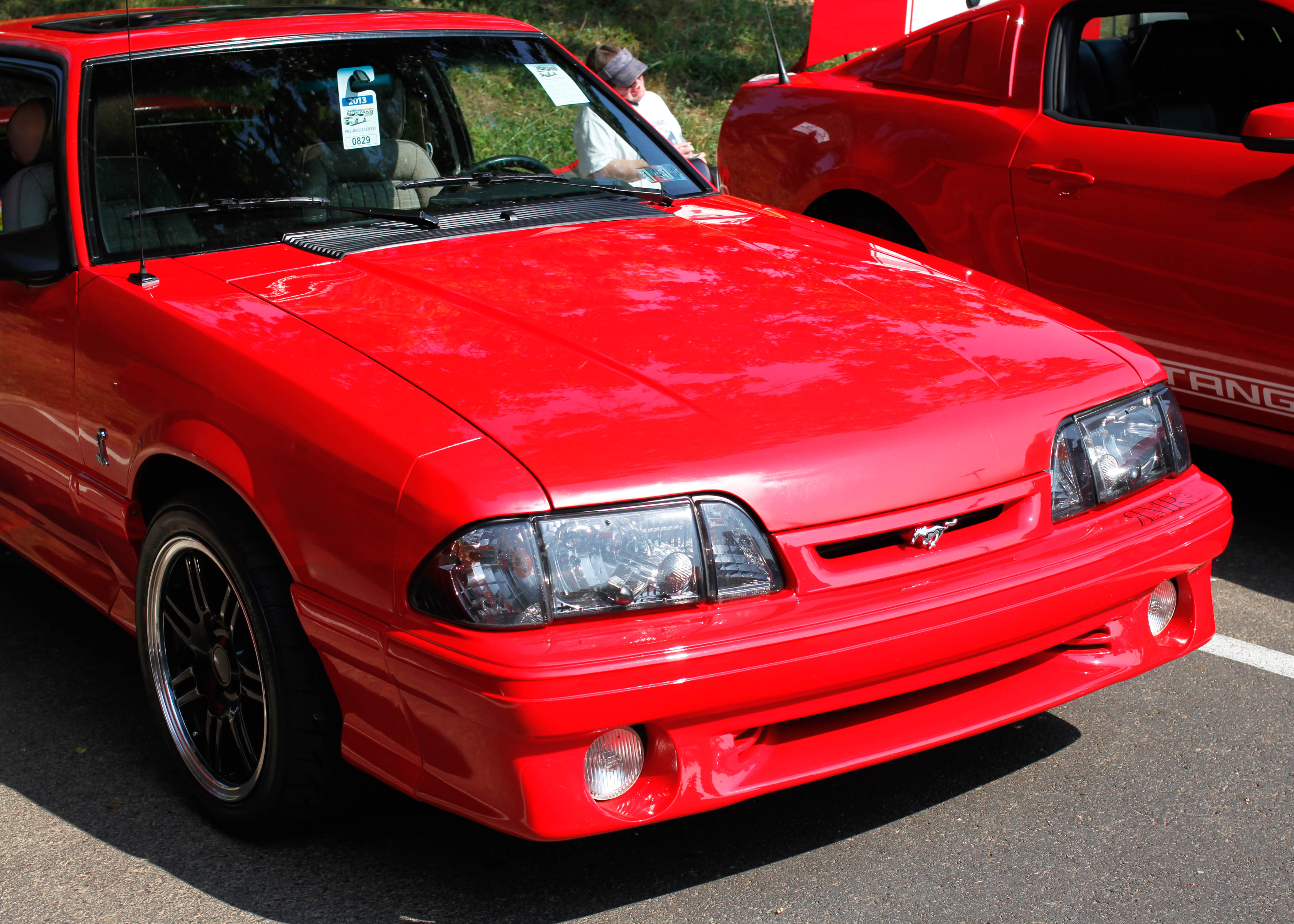 A Note on Other Models Besides the Fox

1994-1998 Mustangs: Installing a Coyote in a New Edge 'Stang is a direct swap for all intents and purposes. The engine itself fits directly in place on the K-member. However, a few changes must be made in order to complete the new-tech upgrade. The Coyote engines use completely different electronics (gauge's and such), so you’ll need to do a lot of swapping to make the engine compatible.

Coyote headers tend to interfere with a lot under a New Edge. Specific conversion minded headers and other mods are necessary to hook up the exhaust. The stock K-member also becomes an issue if you decide not to swap it out. You’ll need a shorter oil filter to make it work. Same with the Foxbodies, a Terminator K-Member is a good choice.

The Coyote oil pan will need to be swapped for a New Edge/Coyote designed one.  Using a T-5 transmission is doable with a Quicktime bellhousing. A T45, TR3650, or 2003-2004 Cobra T56 transmission is a bolt up application. T56 Magnum, or TKO 500/600 will need a Quicktime housing as well. The flywheel will need to be an 8-bolt 1996-2004 unit and clutch can be any 10.5" or 11" 1996-2004 unit. Just make sure to get the correct spline for your transmission. Of course, depending on year model, driveshaft and crossmember replacement/modification will be required as well. 4R70W will need an 8 bolt flexplate.

S197 2005-2014: The S197 Mustang and all previous years have a belt-driven power steering pump, but the 2011-2017 Coyote Mustangs have an electric power steering system. A Ford Racing adapter bracket was installed on the right side to carry over the S197 steering rack. You'll also need a Ford Racing alternator kit to move the alternator to the left side of the engine. A BOSS 302 bracket also does the same job.

The Ford Controls Pack will make the swap into an S197 a breeze. Pulling the late-model PCM and plugging it in won't complete the swap; that PCM might not play nice with your Mustang's computers. The Ford pack includes a new PCM with a performance calibration along with a power distribution module which takes care of relays for fans and other accessories. Note that the PCM works with a return style fuel system only. A new aftermarket sending unit for better fuel delivery will work in the stock tank. The same Ford pack also takes care of the Coyote or Aluminator transmissions.

The sway will also require the use of a BMR tubular K-member to hold the motor and secured using new Coyote motor mounts. Coyote swap conversion long tube headers will need to be located, and the rest of the exhaust will need to be custom fabricated.