Most Popular in Mustang Shifters 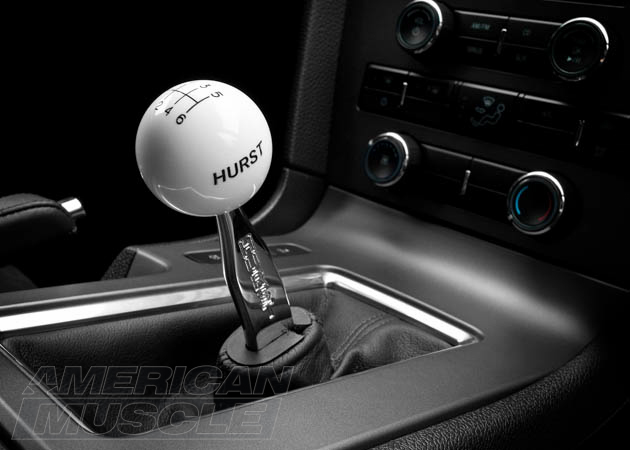 Analyze the pros and cons of upgrading the stock shifter on your Mustang to an aftermarket short throw shifter. Here you'll find the answer to which is better, a stock or short throw shifter, depending on your Mustang and how you drive it. Some stock shifters also aren’t always the best feeling and can be a tad wobbly. This guide will detail how to resolve that issue as well.

Take the level of enjoyment you get from driving your Mustang to a whole new level by replacing the inferior stock shifter with a premium aftermarket option.

Aftermarket short throw shifters give your Mustang a noticeably better shifting feel and quicker shifts over the original manufacturer's shifter. A shifter's throw is how far the shifter moves between gear selections, and Ford has built usable shifters into their Mustangs. However, most stock shifters are a compromise of performance and NVH (noise, vibration, and harshness) reduction, and their objectives tend to lean towards the low NVH side.

Choosing an aftermarket short throw shifter for your Mustang will improve your driving experience tremendously and provide you with quicker, smoother shifting every time. Short throw shifters also provide a new custom look and feel that puts a nice touch on your Mustang's interior. There are also some shifters that feature a unique handle design which allows the handle to swivel and adjust side to side to move the shifter closer or further away from you. Almost all designs are constructed of high-quality aluminum so they are built to last and are less prone to wearing out like the factory shifter. The aluminum construction also reduces slop from the stock shifter by removing the rubber bushing in place of a more solid construction. 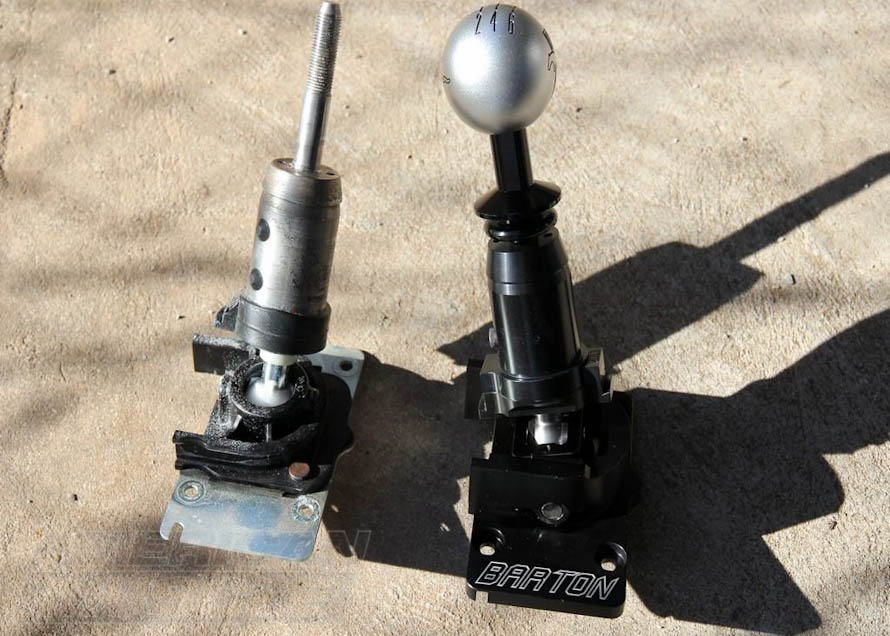 Short throw shifters not only increase performance but they also change the tactile response the driver feels when interacting with the car. This increased connection with the car gives you more confidence in your gear changes as well as just a more connected feel to your car. The crisper and cleaner shifting feel really makes a lot of drivers enjoy their Mustang more than if it was stock. For many, a new shifter is not about better times or even faster shifting. It is about driver feel and establishing a better connection with the car. 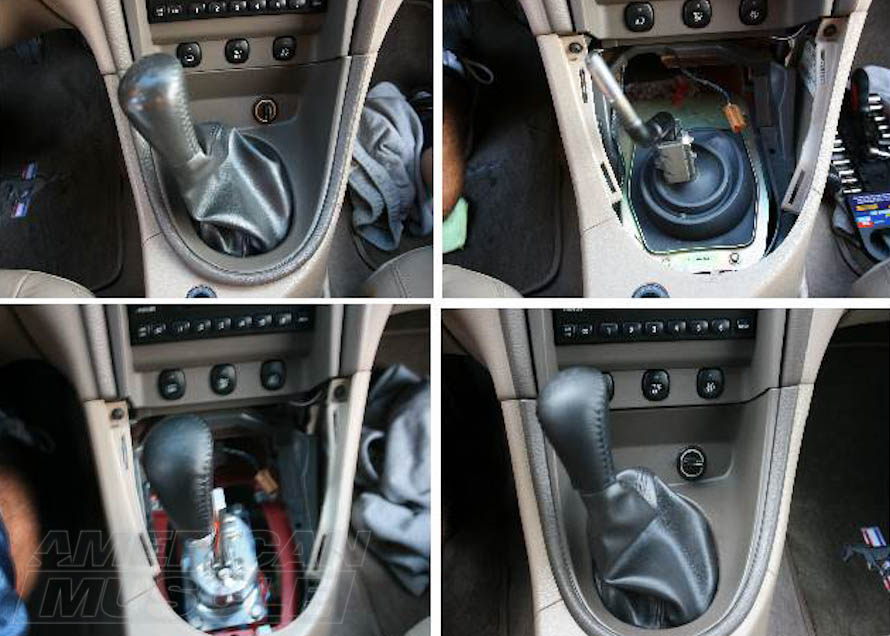 New Edge Mustangs came equipped with either the T-45 or a TR-3650 transmission, and their shifters are notorious for having excessive slop. Like mentioned above, aftermarket options feature a solid billet aluminum construction that gets rid of the stock rubber bushing on the shifter handle. They also have stronger centering springs which help place the shifter correctly during hard shifts. They also feature adjustable shift stops which are critical if you have a T-45. The T-45 lacks internal stops which means shifting too hard can bend the shift fork and can lead to costly repairs. The TR-3650 does feature internal stops, but the adjustable stops can still be used as extra protection.

The shifter in the Coyote Mustang generally works well when cruising around. However, when you drive the way a 420 HP pony car deserves to be driven, the shifter occasionally fails to keep up. The imprecise action of the stock shifter along with the soft rubber mounting bracket will cause you to miss shifts sooner or later. The second to third shift is one that is particularly difficult with the stock shifter. It can cause even seasoned drivers to miss shifts. An aftermarket unit, such as the SR Performance short throw shifter, will reduce the shift distance by 25-30% while also getting rid of some of the notchy feel of the stock shifter. Instead of fighting back when you try to shift into 3rd gear, it’ll slide right in.

Newer Mustang models with the manual MT-82 Transmission have a separate shifter bracket. When upgrading, you want to be sure the new shifter comes with this bracket. If your budget is tight then consider getting the bracket before the shifter. The bracket is critical to smooth operation of a new short throw, and also reduces shifter slop. The linkage joining the shifter and transmission is also a little weak and can be prone to flex, especially when you are ringing every gear out. Aftermarket shifter brackets are generally made of CNC machined billet aluminum and house polyurethane bushings. Between the shifter apparatus, the shift knob, and the linkage, there are multiple ways to improve the feel and performance of the stock MT-82 Mustang shifter. The transmission bushing at the end of the shifter is an important piece for reducing vibrations and noise. Be sure to replace it, or use a new one when you upgrade. 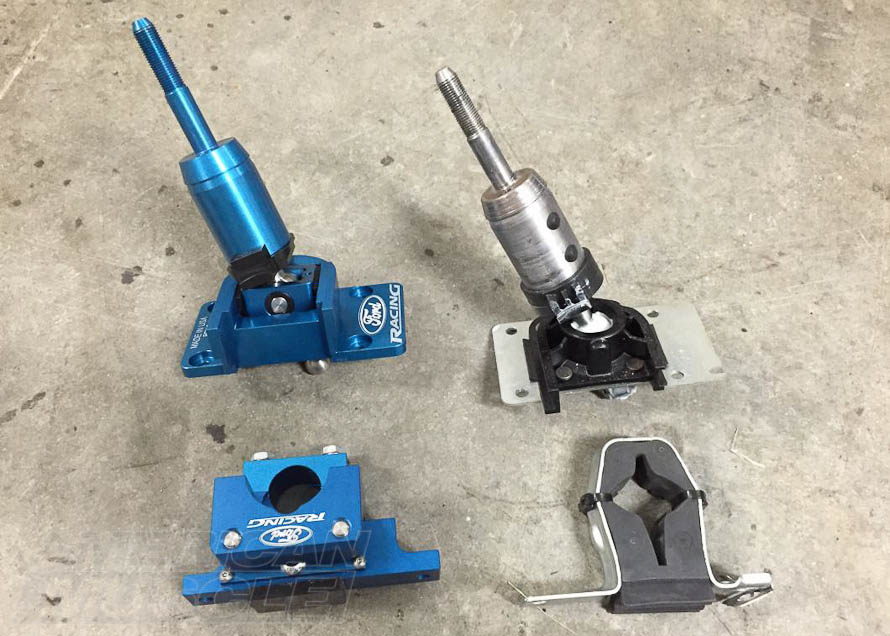 The shifter setup on the S550 Shelby GT350 Mustang is a lot stouter than the EcoBoost, V6, and GT Mustang shifter. The GT350 uses the Tremec 3160 transmission that has a shifter that sits directly on the transmission. There is less that needs improving on the finely tuned GT350 Mustang shifter, but there are still upgrades you can make to improve and personalize it.

How Exactly Does a Short Throw Shifter Work?

A short throw shifter modifies the geometry of the shifter so the travel distance of the shift lever is reduced. It moves the pivot point higher up the shift rod causing you to move the shifter less distance, hence the shorter throw. Most short throw shifters include a shorter shift handle so the reduced action is complemented by the height of the lever. Some people find the look of a shorter shifter too much of a departure from stock and to compensate, some manufacturers have engineered the fulcrum point so it has a shorter than stock travel, yet retains the same stick height. That said, many Mustang enthusiasts consider the trade off in stick height worth the performance gains. Typically, you can expect about a 25-40% reduction in shifting distance with a short throw shifter.

The tighter and more controlled shifting characteristics add a level of precision when stepping through the gears longer shifters can’t offer. This is because the short throw shifter removes that jerky, off track shift with the original manufacturer's equipment. You will feel ultimately more connected with your car and driving with this enhanced control and precision.

Okay, Short Throw Shifters Perform Better, but Will They Last?

Short throw shifters can also offer more durability with less all around wear and tear on your manual transmission. They can reduce shift fork damage by removing the tendency to miss shifts from a sloppy stock shifter and some include positive stops to prevent the lever from traveling too far. Preventing transmission problems makes an upgrade to an aftermarket shifter even more valuable. 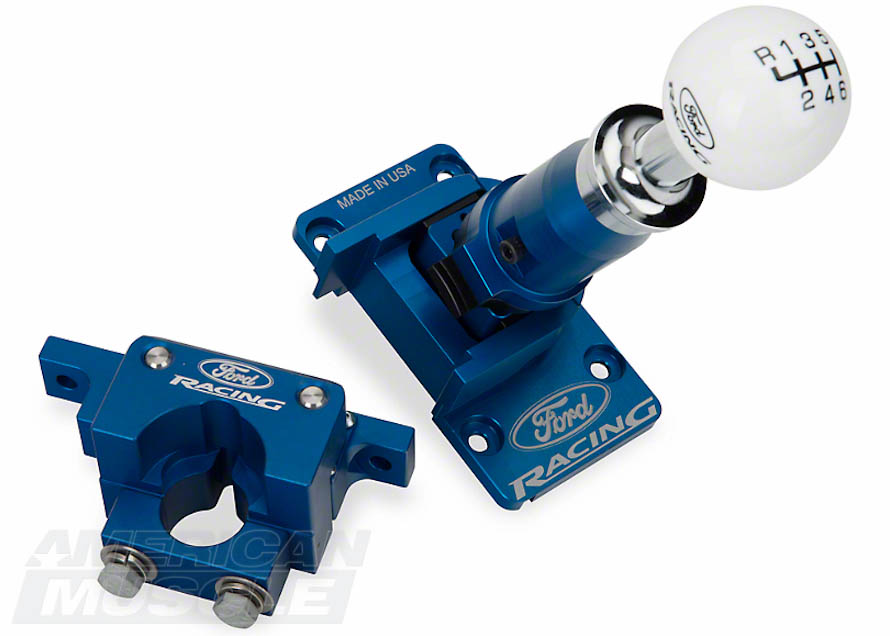 Most short throw shifters allow a wide range of choices of shift knobs to further personalize the interior appearance of your Mustang. When you wrap your hand around a shift knob you want to feel a perfect fit. With the variety and types available, there is a shift knob that fits any hand and any style.

Retro style shift knobs are a popular choice for all generations of Mustangs. These round knobs come in four, five, or six speed varieties and have a choice of colors plus the classic; white, black, satin brushed finish or chrome. An alternative to a round style are the digital shift knobs, such as a Raxiom digital shifter. The digital shift knobs are the ideal for those looking for a more unique and different look. The knob has a bright LCD digital display that shows what gear the car is currently in. They even have a choice of 256 color LCD display which will work perfectly in the newer Mustangs that have the "My Color" ambient lighting feature. 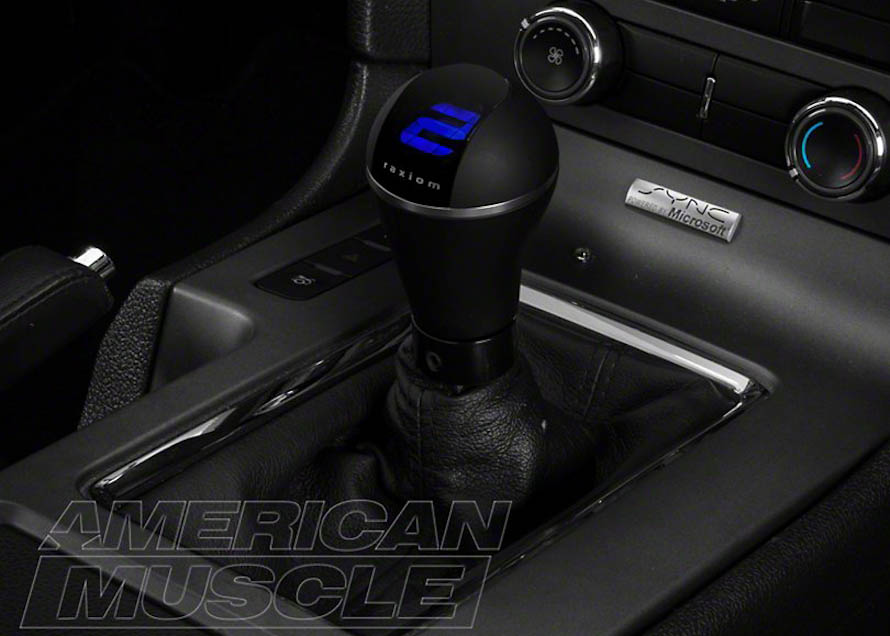 Other options include billet t-handles. These knobs will fit just about any year Mustang as well. Drivers that enjoy a lot of leverage opt for the pistol grip shift handles or the more common old school t-shaped handles. Although most racing school instructors do not recommend pistol or t-handle grips for most racing scenarios.

When considering aftermarket parts for your Mustang, short throw shifters are a good early modification to make to your drivetrain. They have the style, the enhanced driving performance and can offer a longer life for your transmission. You can install them in your own garage easily, or have them installed at a professional garage. Either way you will most likely be really glad you made this upgrade.

Are there Shifter Options for Automatic Mustangs Too?

Got an automatic? Don’t worry, you’re not left out. B&M offers a ratchet shifter automatic cars. It installs where your existing shifter is with no modifications. It features a lighted gear indicator as well as a reserve lockout that prevents you from shifting into neutral, reverse, and park when you’re hammering through the gears.

If you don’t feel like replacing the entire shifter or if you want to change the positioning or look of your current short throw shifter, then look into getting a new shifter handle. There are handles available that bolt right to the factory shifter and can be installed in a matter of minutes. This is also the best route to take if you’re trying to save money. They are very affordable and still give you shorter, firm shifts. Steeda also offers a billet pro street handle that leaves the handle exposed and adds to that retro muscle look. The pro street handles also come in either white or black, so if you’re looking to change your shift knob as well than this is the perfect upgrade for you.

If you’re current shift knob is old and worn or you just want to change the look of it, then look into the huge selection of aftermarket shift knobs. They are very affordable and will give your interior a nice touch. You can select a shift knob that better fits your hand and is more comfortable when shifting. Steeda, Roush, Shelby, and Ford Racing are some of the top brands when it comes to shift knobs. If you are looking to add to that classic muscle car look there are some options out there for you as well. There is a wide variety of shift knobs and there’s something out there to accommodate everyone.

Do I Need a New Gasket When Replacing My Shifter?

When installing a new shifter, it’s also a great idea to pick up the shifter base and handle gasket. The gasket will make it faster and cleaner to install the new shifter, and reduce the risk of leaking gear oil from the old gasket. 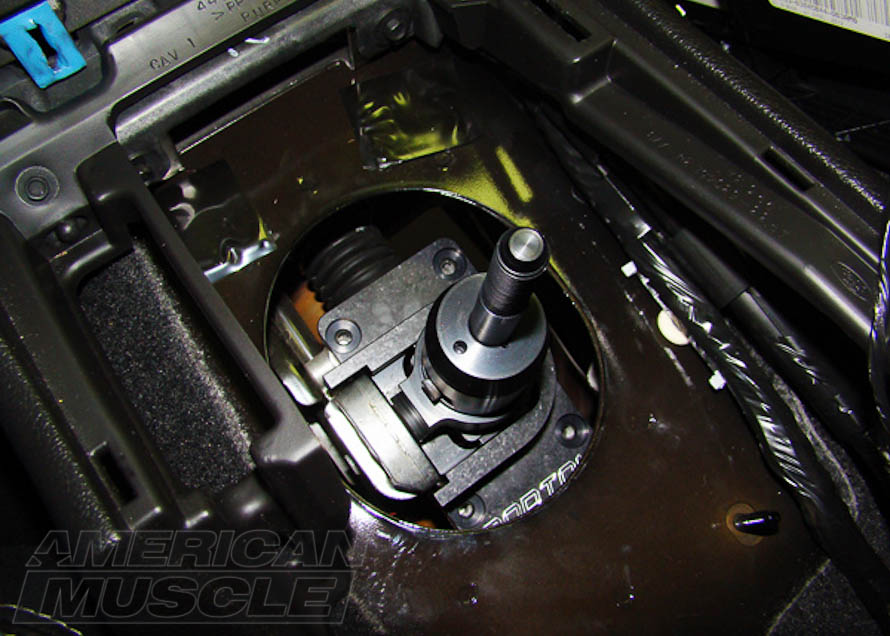 If you're having issues with you shifter shifting into different gears or getting out of gear, try the following:

If the cable is not adjusted correctly, the transmission will still be applying pressure on the clutch, making the shifter feel very heavy and often stick in/out of gears. Adjust the cable outward until the shifter moves freely between gears. Test while driving, not while parked as this will give you a false positive result.

Aftermarket shifters will have "lock out" bolts in the center where the shifter goes into 3rd and 4th gear. They are there to stop the shifter from over throwing the gear and damaging the transmission. If they are adjusted too far out, they will prevent the car from remaining, or going, into gear.

The bolts should be adjusted so the shifter and the bolt head allow no more and no less than a piece of paper to pass through. Better to have them just touch, than have a visible gap. 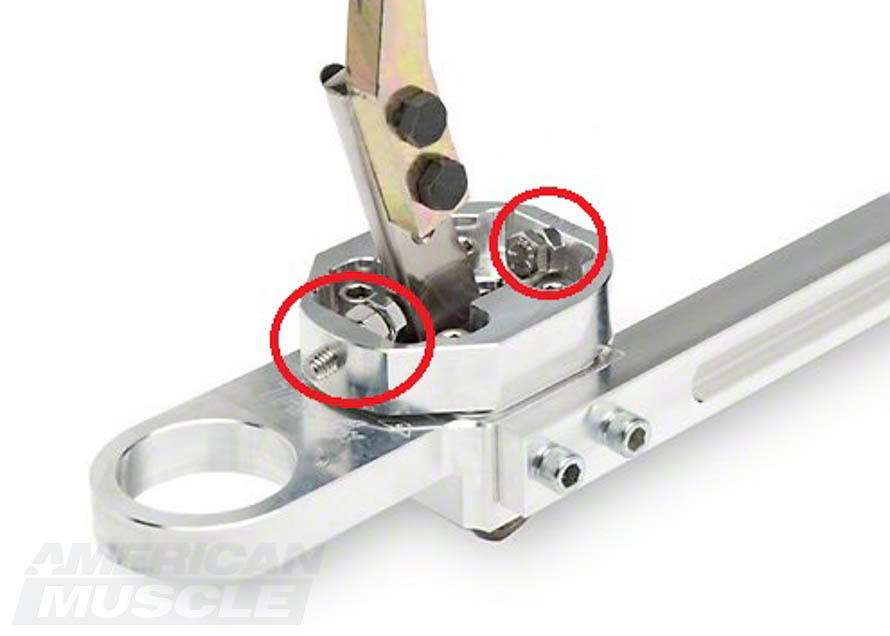