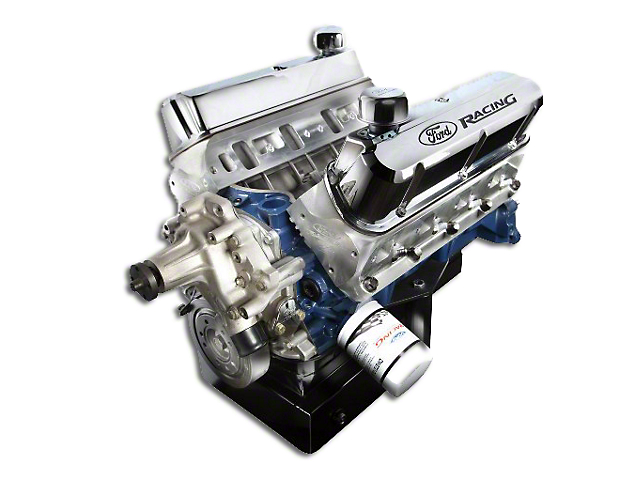 Maximized Output in a Lightweight Package. Ford Performance’s popular 302 Boss has received an upgrade courtesy of their 363 CI 500HP Boss Crate Engine with Front Sump Pan. It’s been engineered to maximize engine output, with engineers having enlarged the bores on the engine blocks to minimize the weight without sacrificing on power.

Features High-Quality Components. The Ford Performance 363 Boss’s components come from the most trustworthy suppliers. Indeed, it utilizes parts from aftermarket brands like Mahle, SCAT, Clevite, COMP, PAC, Fel-Pro, and more. That’s why you can guarantee that it’s a high-quality package to make your Mustang ready to compete.

Straightforward Engine Replacement. Ford Performance’s 363 Boss Crate Engine is designed to fit inside your Mustang without major modifications. However, distributor, neutral balance flywheel, and intake manifold are required for a complete installation and must be purchased separately.

Ford Performance Limited Warranty. This Ford Performance 363 Boss is warranted to be free of material defects and be of high-quality workmanship for 2 years or 24,000 miles traveled—whichever comes first. However, this applies only to the original retail purchaser, with some exclusions.

5.0 out of 5 overall rating from 1 customers
Reset

Can this be used for everyday driving?

What's the biggest lift can this engine can take

Will this motor meet California smog standards with a fuel injection system??

I have 02 GT. Can I swap this engine, and use most of my parts

Is this engine built to handle boost?