Find Transmission Parts for your Mustang 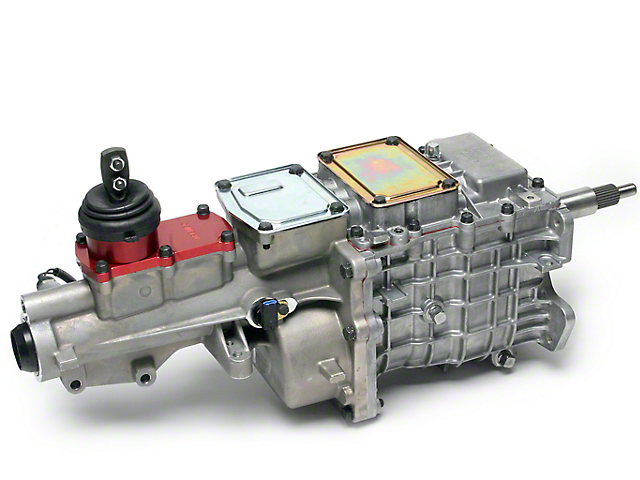 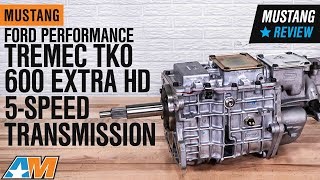 14 Reviews
Close X
Enter Your Email to Save Products.

If you want one of the most popular and maybe one of the most bulletproof five-speed transmissions out there for your Fox body, SN95, or retro mod build, the Tremec TKO 600 Extra HD will be the ticket. Now as the name suggests, the Tremec here will offer a torque holding capacity of 600 pound-feet while this particular trans, guys, will offer that slightly shorter 0.82 fifth-gear ratio compared to your other option currently on the site with a 0.68 fifth-gear ratio. Your price point for the Tremec here is gonna land right around 2500 to 2600 bucks and the site is gonna knock this one up to a full three out of three wrenches on the difficulty meter and about a day or so to get everything into place.So if you guys didn't know by now, Tremec builds some of the baddest transmissions in the game whether it be the 3650, the 6060, the TKO that we're talking about here, or, of course, that legendary T56 Magnum. It's really hard to go wrong rowing gears with a Tremec. Now the TKO series of transmissions is, again, one of the most widely used aftermarket five-speeds in the game and the reason for that is pretty simple, it's gonna be extremely versatile thanks to the numerous shifter mounting locations in addition to being able to use both cable and sensor-based speedo outputs. Finally, guys, this thing is gonna be about as tough as they come in the land of five-speeds. Now that strength is gonna come from a very stout build here from Tremec, guys, including the three-rail internal shifting mechanism, 26-Spline input shaft, along with that 31-Spline output shaft, cast iron shift forks in this puppy, and finally, a single piece countershaft and gear set, all manufactured from 4615 grade forged alloy steel. Now the trans here itself is gonna measure just north of 30-inches in length and gonna weigh in right around 100 pounds or so dry. Mind you, guys, that is without the bell housing attached or any of the extras needed for the installation. And that is a perfect time to segue into what is actually needed for your install and honestly, guys, a lot of it will depend on what you plan on dropping the Tremec into. But in a nutshell, you're obviously gonna need a bell housing specific to your engine setup, whether it be 5.0 based, 4.6, or 5.8, in addition to that 26-Spline clutch. Your crossmember is also something that will need to be addressed but, again, will be different depending on your gear, and then finally, the drive shaft will either need to be changed entirely or modified, again, depending on your model. For instance, some of you guys can even reuse your factory manual driveshaft but you'll either need to swap out the yoke or add a spacer. So again, just make sure you do your homework depending on what you plan on dropping this guy into. But one big thing to point out here, guys, with this particular TKO 600 is that it, again, features that 0.82 fifth-gear ratio and what does that mean? Well, currently we do have two options available here at AM with the TKO trans, the 0.82 which is currently sitting on my table along with the 0.68 fifth-gear which is also available for the same price. Now the 0.68 is gonna be more of your traditional overdrive, meaning you're gonna do a lot of highway cruising, you wanna save some gas, and you don't wanna turn a bunch of RPM, the 0.68 is probably gonna be the way to roll especially if you have a real steep gear in the rear like a 4.10 or something higher. Now, on the other hand, if you have a taller gear in the car like a numerically lower gear ratio or if you happen to road race your car a lot and you want all five gears to be usable, then I'd say the 0.82 that we have here would be that way to roll. Why? Well, there isn't gonna be as big of a drop from fourth-gear which is 1:1 to fifth which is gonna be that 0.82 meaning the car is gonna stay in the revs a little bit better in fifth-gear compared to the 0.68 option. You also have to keep in mind though, guys, that if you do go with this trans and its 0.82 fifth-gear ratio and you have a numerically higher gear in the rear end such as a 3.73, for instance, you are gonna be turning some higher RPM in fifth gear on the highway. So again, just something to think about before making your final decision.Install, again, will differ from car to car so let's just call it three out of three wrenches on the difficulty meter here to be on the safe side and I'd say a day or so to get everything in place. Fluid recommendations per Tremec include just over 2-1/2 quarts of either GM Synchromesh, Dexron III, or Mecron ATF or any comparable or approved aftermarket fluids from Amsoil, Red Line, or Royal Purple. So wrapping things up here, guys, if you're looking for a very tough five-speed to handle some hard shifts and a lot of power in your Fox, SN, or classic Mustang, be sure to consider the legendary Tremec TKO 600 right here at americanmuscle.com.

Heavy Duty TKO. Is your high performance 5.0L Mustang making more power than your stock manual transmission can handle? Then you need to upgrade to the Ford Racing Tremec TKO 600 Extra Heavy Duty 5-Speed Manual Transmission. This Tremec TKO replaces the older TR-3550 and has a torque capacity of 600 lbs./ft. making it perfect for high-performance applications.

Built Ford Tough. The Ford Racing Tremec TKO 600 Transmission has a close ratio 1st through 4th gear and is equipped with a 26 spline input shaft and a 31 spline output shaft. It features improved cast iron shift forks, a one-piece counter-shaft, and gears made of 4615 steel which increases torque capacity.

1994-1995 Installation Notes. Installation of the Ford Racing Tremec TKO 600 Transmission in a 1994 to 1995 Mustang will require modifying the vehicle crossmember, lengthening the driveshaft by 0.625'' and the use of Ford Racing clutch fork part # E6ZZ-7515-A.