Find Chin Spoilers and Splitters for your Mustang 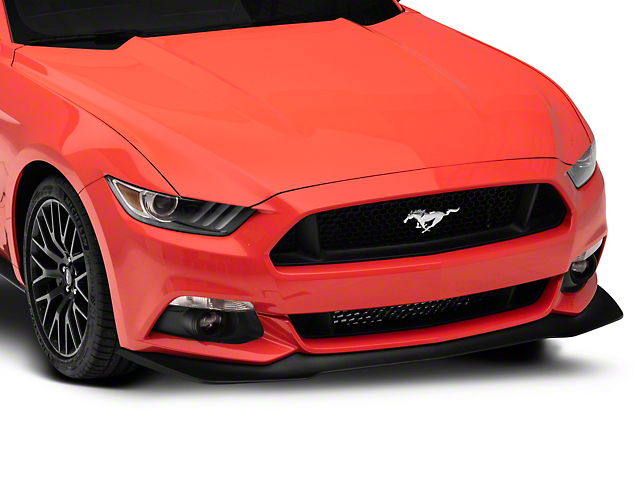 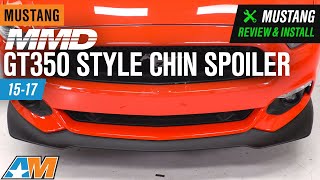 If you're the owner of a 2015 through 2017 V6 EcoBoost or GT Mustang and you wanna add some of that aggressive GT350 styling to the front end, well then MMD's GT350 Style Chin Spoiler here would be a great choice. Now, the MMD option will be made from impact-resistant thermoformed ABS plastic, and then finished off in a factory-like textured black finish for all around 250 bucks. Now, install according to the site will get a strong one out of three wrenches on the difficulty meter here, take about an hour or so to complete from start to finish as we'll demonstrate a little later in the video. Now, obviously there is a lot to like about that Shelby GT350, right? From high revving, flat plane 5.2 liter, the corner-carving suspension and finally the aggressive styling that really does help separate the car from some of the non-Shelby models. Well now, thanks to MMD and the chin spoiler here, you can add a small piece of that aggressive front end styling without having to change out the entire front fascia.Now, material-wise, you're gonna find a very similar build to that of your factory chin spoiler, and that is this black-green texture material, which is sure to flow very well [inaudible 00:01:16] other factory plastic already present on your S550. Now, outside of the material, the spoiler itself was designed using original Ford CAD data, so it will certainly fit like a factory part as well. Now, the site will say this is also gonna help improve your aerodynamics once installed, but this is really more about appearance than an arrow park in my humble opinion. As far as what it's gonna do for your chin spoiler area, well as you can see, the side portion here is a lot more pronounced than the base car and even the performance pack chin spoiler. So, just be prepared for something that's gonna make a whole lot more of an impact visually. Now, speaking of fitment, I have seen a few questions in regards to the belly pan and performance pack in non-performance pack cars.And here's what I can say on that issue. If you have a non-performance pack car, well then your install is really not gonna be anything out of the ordinary and it shouldn't involve any modification whatsoever. However, if you do have a performance pack car with a slightly different belly pan, then there might be some minor modification needed to the belly pan itself as a few of those attachment points will be a bit different. However, to give you a better idea of how this will all go down, here's that detailed walkthrough we promised you earlier, along with a quick tool breakdown.The tools used on this install were a quarter-inch cordless impact, a 7-millimeter socket, a clip removal tool, a small flathead screwdriver, and a quarter-inch ratchet. So, the first step of this install is going to be to get underneath the vehicle and remove the belly pan that you can see right behind me. There are about 20 screws and a handful clips that need to be removed to pull the belly pan down so that you can get access to the back of the bumper where the chin spoiler is located.Next, I'm gonna remove the handful of push clips that hold the belly pan to the bottom of the car. Next, I'm gonna remove the 18 screws that hold the chin spoiler to the front of the bumper. Now, with all the screws removed, you can pull on the whip and remove it from the bumper. So, if your Mustang is a performance pack equipped Mustang, you're gonna need to remove the inner structure from the back of the chin spoiler. In order to do this, there's just a couple of retaining clips that you have to pry out of the way and remove this structure from the inside and transfer it over to your new one. If you have a base model or an EcoBoost, you don't have to worry about this. Before you can throw this back onto the vehicle, you're gonna want to transfer the one retaining clip on either side of the chin spoiler over to your new one before you can throw it on. Now, you can install your new chin spoiler onto the back of the bumper.Make sure to line up all the bolt holes, so you put your screws in when you're finished. Now, I'm gonna start installing all of my previously removed screws into the back of the chin spoiler. Now, we can reinstall the belly pan and wrap this install up.And that's gonna wrap up this review and install of the MMD GT350 Style Chin Spoiler for your '15 to '17 Mustang. Thanks for watching and for all things Mustang, keep it right here at americanmuscle.com.

Intimidating Shelby GT350 Styling. Give your 2015-2017 Mustang the intimidating styling cues of the mighty serpent with this great looking GT350 Style Chin Spoiler from Modern Muscle Design. This MMD Chin Spoiler will transform the appearance of your mild mannered Pony into an aggressive road warrior. Not only will this Spoiler improve the appearance of your Mustang, but it will also improve its aerodynamics as well.

Simple, Straight Forward Installation. Modern Muscle Design engineered their GT350 Style Chin Spoiler to install simply with no drilling required. This MMD Chin Spoiler reuses the existing stock hardware from the lower bumper splash shield for a secure and straight forward installation. Installation can be completed in about one hour with just basic hand tools.

Technical Note. If you have a Mustang that is equipped with the Performance Pack, modifications to the splash shield will be required in order to install the Chin Spoiler.

Not Compatible with Shelby GT350 models