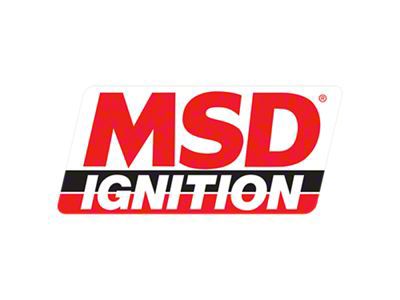 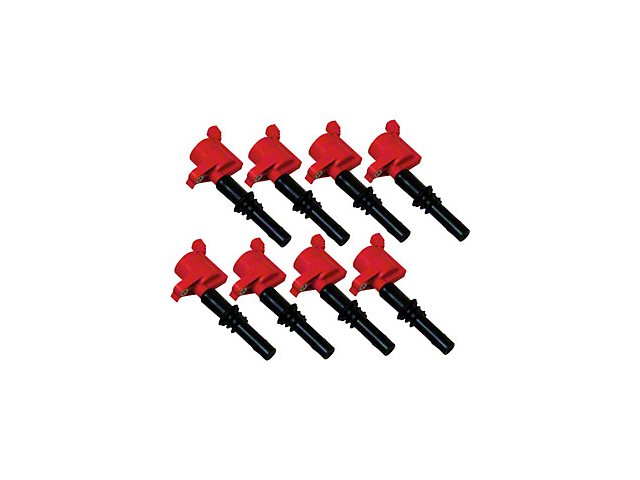 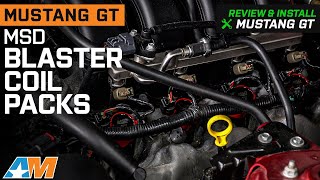 Justin: The MSD Blaster Coil Packs that we have here today will be for the 2005 to 2008 GT owners who are looking to replace a set of failing or faulty stockers with something that will produce a much hotter spark overall and something from one of the most trusted names in aftermarket ignition.Now the MSD blasters here will come in a set of eight. They are CARB-certified and they will feature the signature red finish, all for that mid-$300 price point. Now site's gonna call this one a soft two outta three wrenches on the difficulty meter and about 30 minutes or so to complete from start to finish. But if you hang with me, we'll show you how it's done later in the video.So, one thing I do want to get out of the way before we go any further with this video is that moving into an aftermarket coil like the MSD, for instance, traditionally isn't going to yield massive power gains by themselves. And, well if it does, it's typically because the coils you are replacing were faulty to begin with and really not allowing your three valve to perform at its peak levels. Now that's not to say there aren't benefits to installing something like this, but I don't wanna stand up here and tell you guys that you're gonna pick up 20 to 30 wheel after you install these, because frankly, that just will not be the case.Now what the MSD coils will do is help smooth out a rough idle or a rough rev barring a good set of plugs, of course, and will help clear up any high RPM misfires, and even in some cases improve some fuel mileage. And that again comes back to just how bad of shape your old coils were in. Now MSD claims that all of this will be possible thanks to the increased voltage output over your stockers, and that's going to include the three-valve coils that we're talking about here today. Now they're gonna do this using the patented primary and secondary winding internals. They will feature that same factory-style female socket coil wire design which will basically make these a very simple swap on NEGT.Now, last but not least, guys, the cherry on top literally here is that bright red finish on the coil bodies themselves which will be visible under the hood and will make for a small little appearance bump outside of the bump in spark. But what do you say we stop talking about these things and just show you what it takes to get them in place on your three-valve GT at home? Again, a very, very simple job, guys, and to prove that to you, here's our detailed walkthrough and tool breakdown now.Man: Tools used for this installation: electric ratchet, 1/4-inch drive extension, 7-millimeter socket, and dielectric crease.Hey, guys. Today, I'm gonna show you how to uninstall and install coil packs here on our '06 Mustang. So, let's get started.So, the first thing we're gonna do for our install is we're gonna remove our electrical connector on our coil pack and then our 7 millimeters that's down inside here. So, I'm just gonna push on the clip, pull it up and pull it out of the way, just like that. Then I'm gonna take my ratchet with a 7-millimeter on and remove our bolt down here that's holding in our coil pack. And once I have the bolt out, we'll be able to just give the coil pack a turn and a pop, and she'll come right out, just like that. Now you're gonna wanna repeat the same procedure on the rest of the coil packs on the passenger side. So, now we're gonna remove one on the driver's side, same deal, we're gonna push in on a clip for electrical connection and remove our 7-millimeter. So, I'll pop my clip off here, just like that, take my gun with my 7-millimeter on it, and just pull out our coil pack.Now you're gonna wanna repeat that procedure on the other three on the driver's side. So, now we're gonna reinstall our new MSD coil packs. I'm gonna reuse our old bolt, put some dielectric grease right here so that it slips over the plug. We're just gonna take it, put it back down in place. Once you get it there, you're just gonna wanna push it down. Start your... Once you get it pushed in place, then what I'm gonna do is take my 7-millimeter on my electric ratchet, just give it a snug and hook up our electrical connector, just like that. Now you're gonna wanna repeat that same procedure on the other three on the driver's side.Now we're going to install our new MSD coil pack on the passenger side. I put a little dielectric grease on the end. I'm gonna use my bolts from the old coil packs. We're gonna take these, drop it down into place here, push it down in, get the 7-millimeter started. And once we get it started, I'll take my electric ratchet with my 7-millimeter, tighten it up, get our electrical connector connected in place, and now you're gonna wanna repeat that same procedure on the other three on the passenger side and that'll wrap up this installation.That wraps up this review and install of our MSD Blaster Coil Packs in Red for '05 to '08 Mustang GTs. Thanks for watching, and for all things Mustang, keep it right here at americanmuscle.com.

More Horsepower. The MSD Blaster Coil On Plugs make more power than the wimpy stock oem factory coils to help produce more horsepower from your modern SOHC modular motor and are a perfect match for stock engines and engines with minor performance upgrades.

Application. These MSD three valve Blaster Coil On Plugs are designed as a direct performance replacement for the 2005 to 2008 SOHC GT Mustangs.