What do Caster Camber Plates do for My Mustang?

Caster and camber angle both play a fundamental role in the overall suspension geometry of any vehicle. Most cars leave the factory with a non-adjustable (or minimally adjustable) caster and camber that is set for the life of the vehicle. In this case, the Mustang is no different. However, given the nature of the Mustang, it's definitely worth investigating if the stock geometry is optimal for your build – particularly for those who have or want to upgrade their suspension. 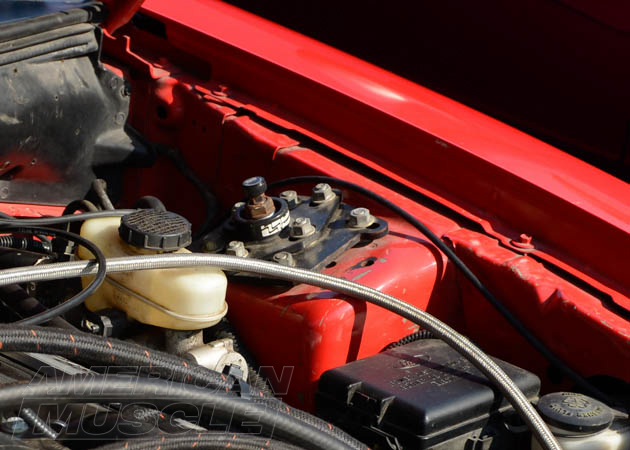 What Does “Caster and “Camber” Stand For?

Caster is the forward and backward adjustment in the plates. The purpose of caster is to keep the tires as vertical as possible through a turn, to better grip and traction. It affects the uppermost point of the steering axis. Caster will not cause uneven tire wear but if not adjusted properly, directional control of the steering will be affected. A properly adjusted caster angle will promote a self-centering tendency of the steering system, aiding straight line stability and eliminating the tendency of a Mustang to wander. Increased positive caster will improve overall stability at high speeds but increases the required steering effort as well.

Camber is the angle between the vertical centerline of the wheel perpendicular to the ground as rotated about the longitudinal axis (when observing the tire from the front or rear – not the side). Camber is described as negative when the top of the tire is tilting inward and is positive when the top of tire is pointed outward of the fender well. If the tire is aligned perfectly perpendicular to the surface, then the camber would be 0 degrees. Too much negative or positive camber will cause uneven wear of the front tires and premature wear of other suspension parts. 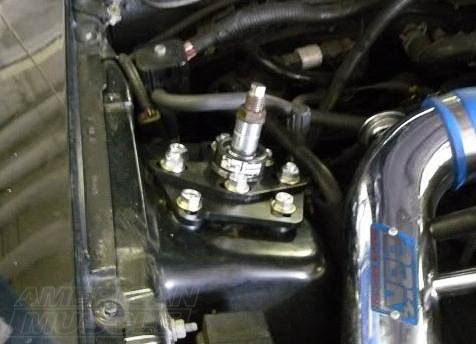 How is Caster Measured?

Of the various wheel alignment variables, caster is perhaps the hardest to conceptualize. Fortunately, while it does affect steering geometry, it’s the least critical variable of the bunch. Caster is the angle between the pivot line of the Mustang and the vertical axis. In most cases, the pivot line is an imaginary line that runs from the center of the lower ball joint to the center of the upper ball joint. A positive caster is referred to when the line is angled forward, and is negative when the line is angled backward.

How Does Camber Help Handling?

The maximum grip a tire can produce is highly dependent on the angle of the tire with the road, and thus camber plays a vital role. It's preferable to have slight negative camber, as this type of setup maximizes tire traction throughout the range of motion of the suspension. However, too much negative camber will not only accelerate tire wear but increases the tendency for the Mustang to over steer. Thus many manufacturers, accounting for this, will design the suspension that initially has negative camber. As the wheel is deflected upward through the range of the suspension, it will gain some positive camber to negate the under steering tendency.

Tire camber is important not only for handling characteristics, but component wear as well. Improper camber setup can accelerate wear on the tire, cause uneven wear on the tire, and even extend to premature wear on suspension components (ball joints are a common victim). 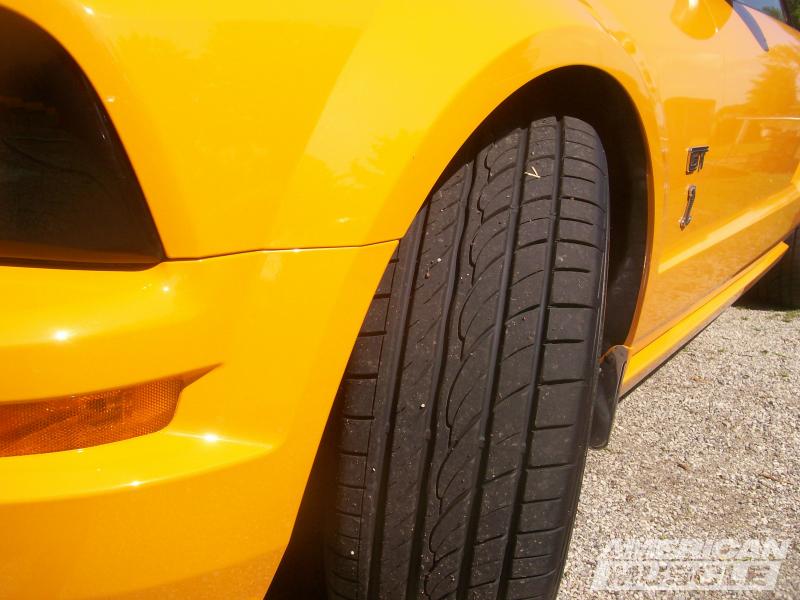 What About Toe In and Toe Out?

Toe defines the position of the leading edge of each wheel relative to the other (when observed as a pair). Toe in occurs when each wheel is pointed slightly inward (rotated about the vertical axis) and toe out has the leading edges pointing away from each other.

Zero toe provides the lowest amount of tire wear and power loss. However, all Mustangs are actually set with a slight toe in attitude. A toe in condition allows the paired wheels to negate each other. Thus if one wheel is disturbed, the path in which they are still travelling will not be significant enough to induce a turn or deviation. Toe out, on the other hand, is the complete opposite. When a wheel is disturbed with a toe out configuration, the deflection of one wheel is enough to initiate a turning motion for the entire vehicle. 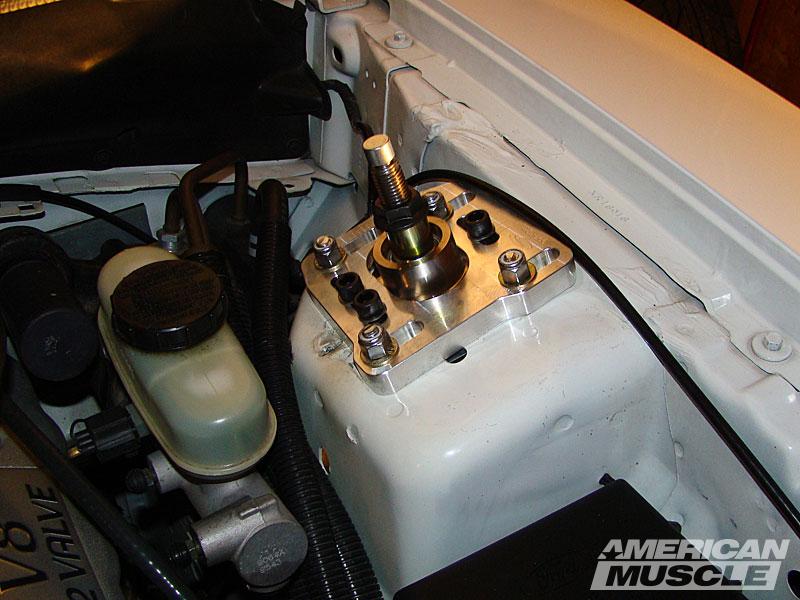 Aftermarket caster camber plates actually come as a set of two plates that overlap each other, as opposed to the single strut plate used from the factory. Overlaying the individual plates allows you to dial in the exact setting you want, without affecting the other. Additionally, many aftermarket plates feature higher strut mounting, which increases strut travel and prevents bottoming the strut out and keeps the strut midway through its travel length for best response.

In a nutshell, the reasons you might want to consider picking up a set of caster camber plates are:

If you purchased a set of lowering springs it’s extremely important to get a set of aftermarket caster and camber plates. After lowering your Mustang, you will need a front end alignment, and this is where your new caster and camber plates will come in handy. Having a properly setup alignment is important for your safety and the performance of your vehicle. It will improve your steering response for cutting corners and keep your car as straight as an arrow on the highway or drag strip. Lowering your Mustang without the use of caster camber plates not only wears your tires and other suspension parts much more quickly, it will negatively affect performance and handling as well. 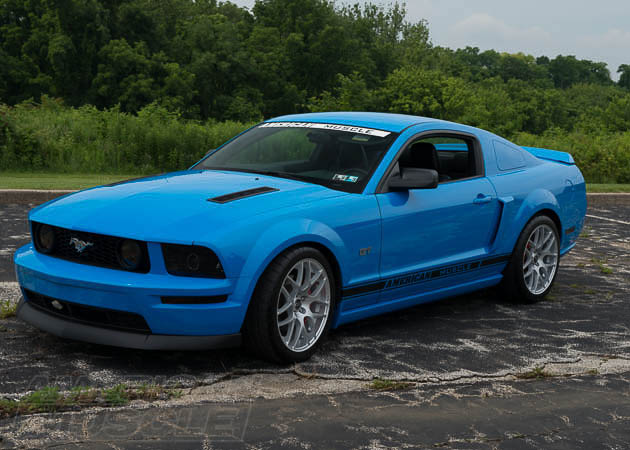 You could, absolutely, install aftermarket caster camber plates on your Mustang even if it is not lowered – there will be no detrimental effect. The better question to ask, however, is do you need to install them. And the answer to this is no, you do not. The OEM plates have all the adjustability required to keep toe-in geometry correct and prolong tire life. Aftermarket caster camber plates are only really needed when dropping your Mustang or making other radical front end changes that would otherwise put wheel alignment out of spec and out of range of the factory serviceability.

Caster camber plates can range in cost from roughly $200-$350, with your higher quality ones being on the higher end of the spectrum. Typically, the price is dictated by the amount of adjustability offered as well as the type of bearings used in the design.

Installing aftermarket caster and camber plates can be a bit difficult. Some products require you to drill a fourth hole to mount the plates because certain designs use a 4-bolt pattern such as Maximum Motorsports. Although the installation itself is something a DIY enthusiast can handle, the car still must be brought to a shop for a professional alignment.

If your camber still isn’t where you would like it be then consider picking up some Eibach pro-alignment camber adjustment camber bolts. These bolts install as the top bolt in mounting the strut to the spindle and offer and additional /- 1.75 degrees of camber adjustment.

Can I Use Camber Bolts Instead of Plates?

While camber bolts may initially allow the user to adjust the camber, they should not be thought of as a long term replacement to caster camber plates. Unfortunately due to their placement at the lower section of the strut assembly, they lack the same range of adjustments, and you are also changing out a vital fastening component that is repeatedly subjected to extreme forces. This moves the camber bolts off of the list when compared to a quality set of aftermarket caster/camber plates that have been designed and tested to exceed the conditions a normal street car will ever undergo. 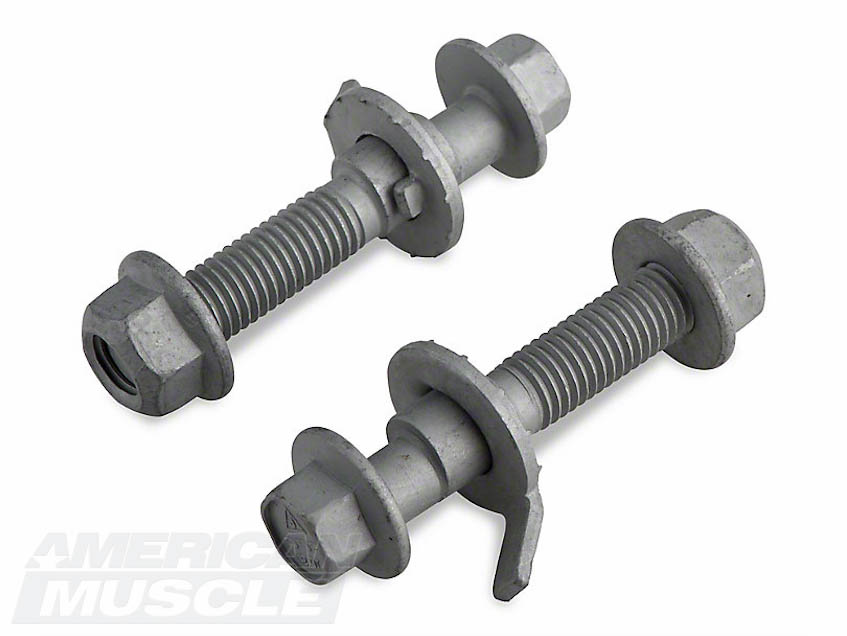 Adjusting the CC plates are as simple as turning screws. However, it can be turning screws several times in order to attain the proper alignment. Proper tools are required in order for proper alignment, without them it’s simply a guessing game. Using the tools to attain initial numbers, adjusting the screws to adjust the caster camber to be within stock tolerances (found in the owner's manual) until adjusted properly. Do not forget to check the toe of the wheels as well, which must be adjusted at the tie rod ends and not the plates themselves.

What Lowering Does to Your Front Suspension

When you install lowering springs, you change more than just the ride height; you also change some of the suspension geometry:

This is extremely important to understand when making modifications to the ride height. All current Mustangs utilize an independent MacPherson strut front suspension, which has its own unique properties just like the panhard bar setup which is used to control the solid axle in the rear. With the MacPherson strut setup, as you lower the front end, the top of the wheel wants to arc inside of the wheel well and angle towards the center of the motor. At the same time, it’s pushing the bottom of the wheel outwards. This angled “up and in” condition is an abnormal amount of negative camber. 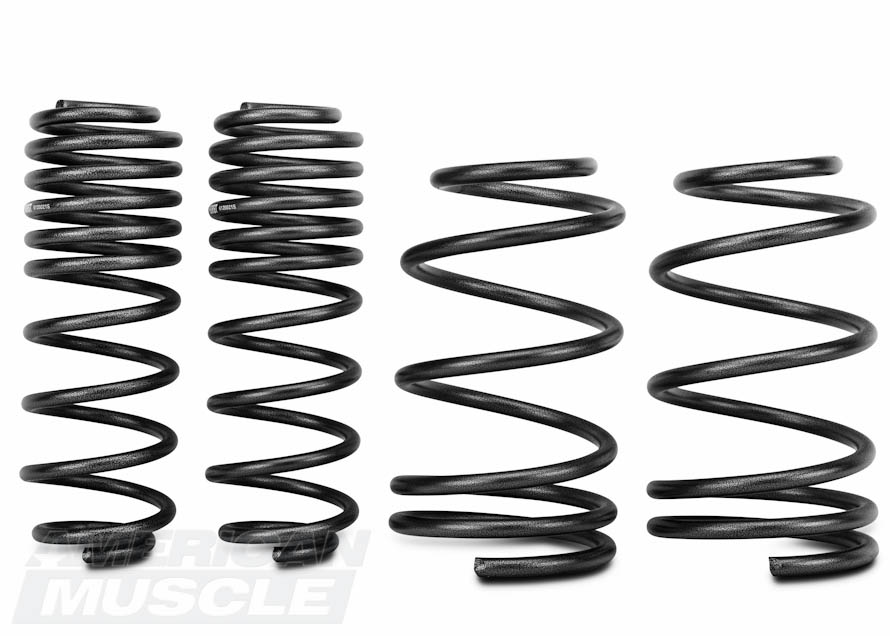 Can I Lower My Mustang Too Far?

Yes, depending on your driving habits and how much of a drop you're going for you can cause yourself more trouble than it's worth. Although you may wish your car was a little lower from an aesthetic standpoint, but for consider driving style, habits, and locations frequented. This will dictate you setup. More importantly, if you daily drive your Mustang, you’ll want to make each ride enjoyable without worrying about increased tire wear or other unwanted side effects from excessive negative camber caused by lowering springs.

How Low Can I Go Without Caster/Camber Plates?

The main question you have to ask yourself is how low do you want to go with your Mustang? If you're only dropping the car a small amount (less than an inch or so), you can probably get away without using caster camber plates (asking when you go in for an alignment can reveal your need for caster camber plates). However, if you plan to install a set of lowering springs that drop your Mustang quite a bit and eliminate the 4x4 stance from the factory, you'll definitely want to invest in caster camber plates. Not only to correct alignment issues and poor tire wear, but they will allow you to more accurately dial in your suspension in the future. 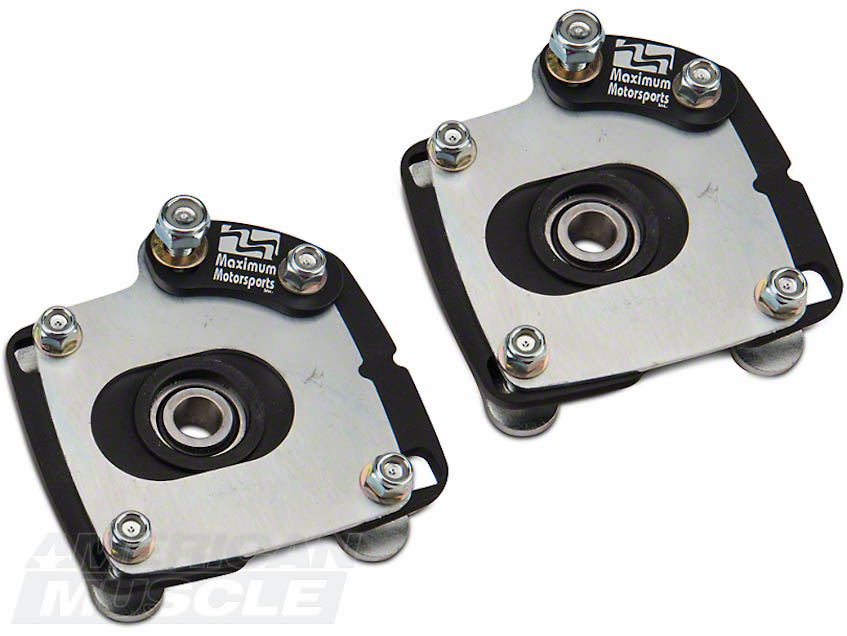