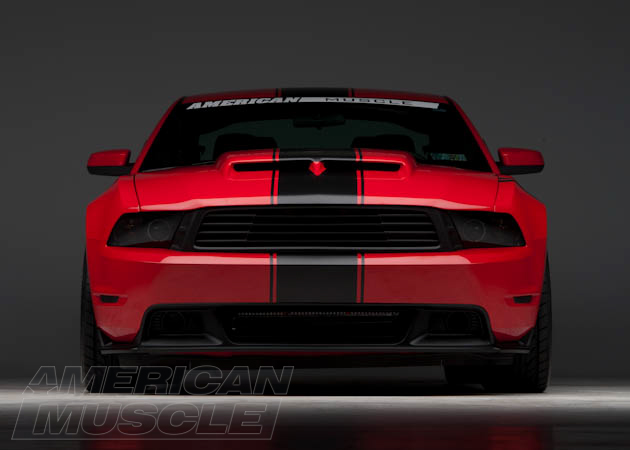 The front end of the Mustang is an iconic look that has changed over the decades while maintaining its roots and heritage. An incredibly popular appearance mod for many enthusiasts that can shake up the look of the front end is upgrading/replacing the factory grille with an aftermarket one. This guide will go over what you need to know when it comes to upgrading your Mustang’s grille.

Anyone working at personalizing their Mustang will want to replace the boring stock grille with something that complements their car's style. Choose from tons of different designs and materials to find the grille that's right for your car.

What Does a Grille Refer to on a Mustang?

A grille is located in between the front bumper and the hood. Consisting of an opening of several slits or patterned holes, the grille lets air or water enter and leave but keeps larger objects out. Many Mustang enthusiasts will replace their factory grilles with better looking and stronger aftermarket models. If you want to better complement your car, or are looking for a new style altogether, replacing your front grilles are a great way to achieve the look you desire.

Many grilles are of an aluminum construction, but some are made from OEM-grade plastic. Durable and lightweight, aluminum is an ideal material for replacing your stock plastic grille. Aluminum can be powder coated and comes polished or with a chrome-plated finish.

An advantage to aluminum grilles, though slight, is they tend to be more durable than plastic. Plastic grilles, on the other hand, are more scratch-resistant than their aluminum counterparts. When it comes time to choose, both materials are ideal and should allow you to choose the style you want first, then worry about what kind of construction it has. 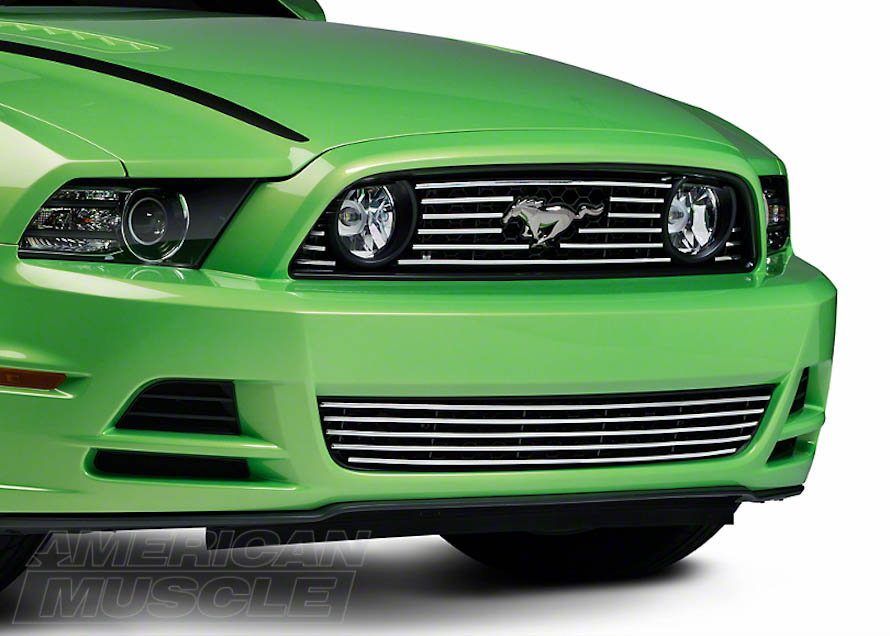 2013-2014 with a Polished Aluminum Upper and Lower Grille

What Are the Different Types of Mustang Grille Styles?

There are multiple Mustang grille styles that include:

A lot of your various grille options exist today because the grilles of production Mustangs inspired their design(s). While the styles to tend to vary in execution from generation to generation, the ultimately are a progression of a design(s) that go back to your more vintage models.

Grilles come as either a direct replacement for the stock grille from the factory, or an overlaying model that attaches over top the original. While installations of most grilles are extremely easy, you must decide if you want to completely replace the factory grille or simply cover it with an overlay. Be sure to check the product descriptions to ensure you're purchasing the desired type.

When choosing which grille type is right for you, the only thing to consider is installation time and difficulty. While overlay grilles are incredibly easy to put on, replacement grilles can vary in application. Some require little more than popping out a few screws and others may require you to drill holes to hold the grille in place. Regardless, replacing your Mustang's grille is one of the easiest mods you can do and rest assured, they come with instructions for a perfect-fit installation. 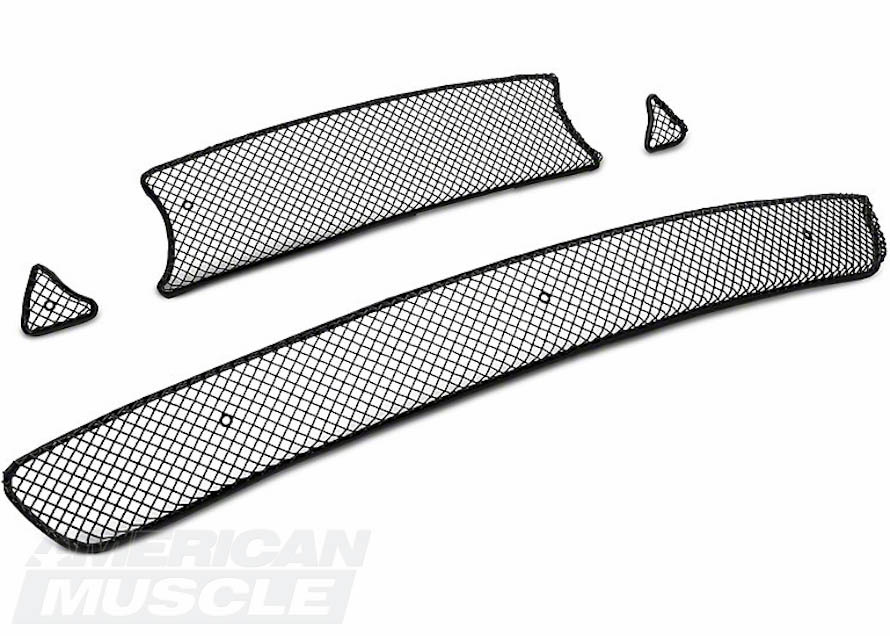 Honeycomb Mustang grilles were a standard grille option with the 2005-2009 S197 Mustangs and a popular design style for that generation. They are named and designed after the design of a honeycomb like you’d find in a bee’s nest.

Billet Mustang grilles offer a more retro inspired look to your Mustang and have become a popular option for 2005+ Mustang owners. Typically available in either black or chrome, billet grilles use a pattern of horizontally stacked bars.

Mustang grille deletes offer a more naked and clean look for your Mustang as they just replace the grilles with pieces that essentially make the edges of your bumper smooth where the grille would latch into. Grille deletes first appeared on Foxbody Mustangs and then made their way into the SN95 & New Edges with a brief hiatus before making a resurgence with 2013-’14 Mustangs and holding strong into the S550s. The 2013 and ’14 Shelby GT500 came stock with a grille delete, making it a desired look for other submodels.

Some designs use less obstructive patterns that can improve airflow and cooling. If you're looking for better airflow, a grille delete or one that has a fog light delete for GT and GT500 models might be ideal for you. Some grilles will fit without replacing the fog lights but come with optional inserts to block off the lights as well as emblems. Another factor to consider is whether you want to keep your stock emblem, replace it, or purchase a grille that removes the emblem completely. 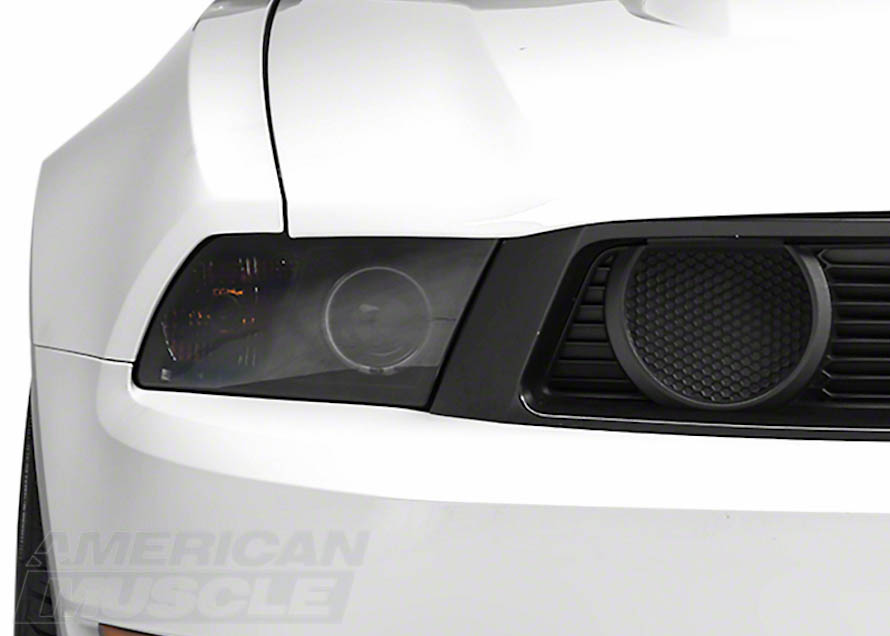 Going all the way back to the 1960s, you have been able to find Mustang with fog lights either in or on their grille. While the style died out for a while, it eventually made a strong resurgence with S197 Mustangs in 2005 and has maintained its popularity into the S550 generation.

Some grille options either fully integrate the fog lights to the grille, while some tuck them behind the grille out of plain sight. The RTR Mustang Grille for 2015 Mustang takes a creative approach to the lights in the grille by using angular LED strips for a totally one-off look.

The Tri-Bar running horse design is one of the most innate part of the Mustang’s identity and can be traced all the way back to 1964. The design has held strong, making an appearance both on stock grilles and aftermarket grilles throughout every iteration of the Mustang. The GT/CS (California Special) Mustangs have always used this design on their grilles and even the Boss 302. Many different billet grilles come with the option of adding the famous Tri-Bar pony to your grille purchase. 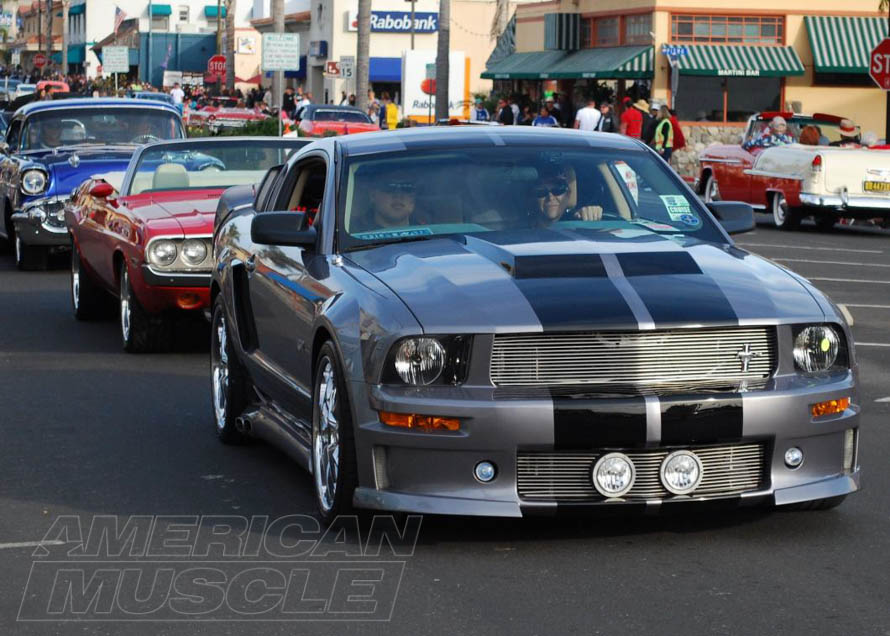 How Hard Is It to Install a Grille on a Mustang?

Installing a grille on a Mustang of any generation is a relatively easy feat that can be completed at home, in the driveway, with a set of basic hand tools. While the install process does very generation to generation (with 2011-2018 Mustang grilles being harder than previous years) they are always relatively straightforward. For newer Mustangs, you will need to remove the front bumper/fascia, which is just removing a few screws and fasteners. Some grilles may require some minor drilling to make room for new screws are fasteners, but there are only a few out there that require permanent modification. Be sure to review install directions before installing any grille on your Mustang.

Ultimately, picking out a grille for your Mustang is a personal choice that no stranger on the Internet can chose for you. To find the best grille for your build, be sure to surf forums, look at pictures, and talk to other enthusiasts; you’ll find the look you like when you see it.

Many people wonder if the 2010-2012 GT front grilles fit the 10-12 V6 Mustangs. The quick answer is no. GT grilles will not fit on the V6 models. However, there are a few options if you want the GT grille but are currently driving a V6.

Why did Ford do this? It’s not certain, but it is wasteful and an issue Ford apparently has become aware of. They corrected this issue in 2013 as the front of the V6 and GT Mustangs are now the same. However, on the 2010-2012 model years the differences are very minor, but the grilles for these model years are incompatible. The top center grille on the GT is also the face for the two side uprights. The V6 model’s grille sits by itself inside the two upright posts. This is the only difference in the front bumper structure between the two. 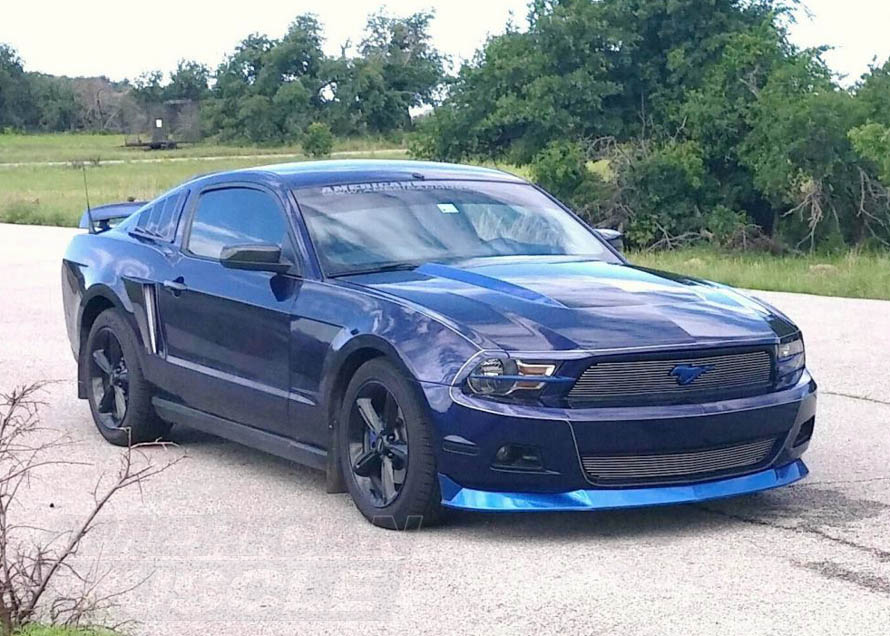 Do not give up hope. There are a few solutions. We all have seen some aftermarket GT grilles that look very sharp that had us asking this very question. Some V6 Mustang owners have modified and simply placed a GT grille on top of the two pylons on the V6 front bumper. This will technically work, but may not go unnoticed at a car show.

The plug and play options V6 owners have are few and far between, but they can be found. There are also some lower lip options available for the V6 model. However, if you have the inclination and funds, then doing a full GT front bumper swap is the best way to achieve your front-end modification goals. It may look like a daunting task, but it’s not as hard as it seems.

If you need another reason to make the full GT bumper swap is so you gain access to the myriad of Mustang GT lower grille and lip options. A popular choice is the Boss 302 lower bumper parts. The lower lip not only looks sharp but also aids in aerodynamics. Plus, performance minded people like the new availability to install a front brake air duct kit. 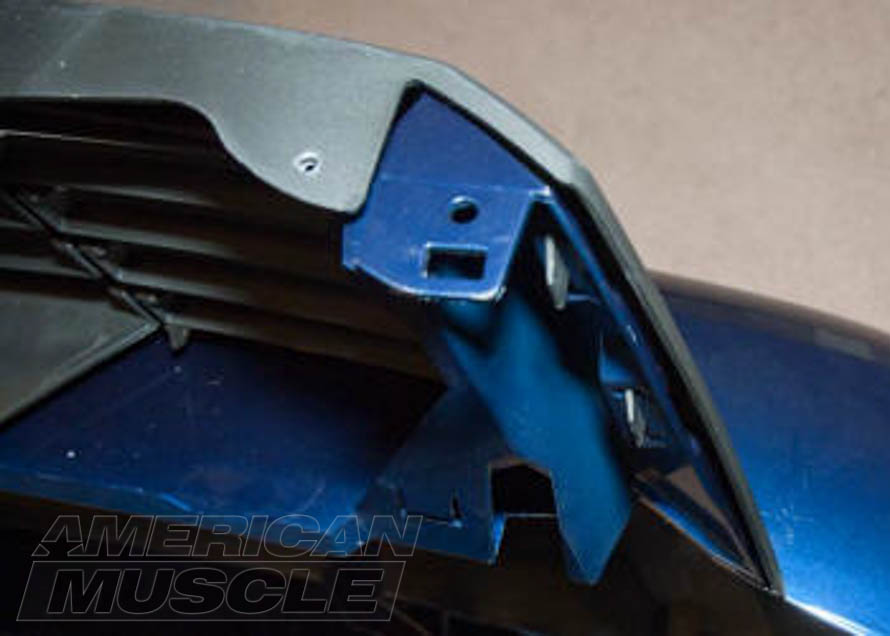 To do a full GT front bumper swap you first have to choose a stock GT bumper or an aftermarket front Mustang bumper. Once you have chosen the bumper then you can choose the GT lower and upper grilles you want to install with it. There is a myriad of options. Chrome, satin, or black colors are available. Or you could order one pre-painted. They also come in plastic or metal construction. Some add lights and some delete lights.

The GT bumper for these years just bolts onto your V6 mustang frame without hassle or modification. This would also be a good time to change out your front headlights. You can reuse your front orange side markers, but any fog lights most likely will not transfer. However, if your new bumper has fog lights then you can most likely just upgrade the wiring harness to make them work with new lights.

The whole procedure takes about 1 hour and you can use hand tools. You first pull the pins, remove the top radiator cover, and then the lower under cover. Then remove two screws from each side of the wheel well. There are two bolts and two tabs on the top that lift up and pop off, and then on each side there are tabs you pull out. Then you can remove the bumper. One person can do it but having a second set of hands is very handy. The last thing you want to do is scratch the paint on your new bumper. 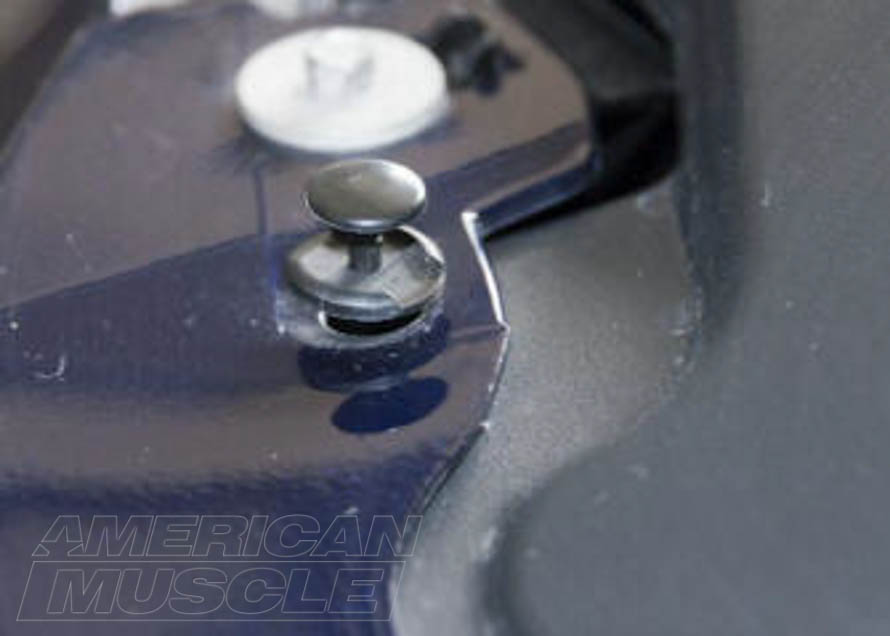 There’s no doubting that the GT Mustang has the best grille when it comes to 05-09 models. If you have a V6 of a similar year, you might be tempted to squeeze a GT grille into your car. We say go for it considering the grille will boost styling points. It’s not as simple as taking a grille off of a GT and popping it in there though. To run the integrated lighting, you will need to do some wiring, and the factory horn bracket in your V6 may make things difficult. Your best option is to reach for a GT style grille designed to work with V6 models. There are plenty of options out there and they make ease of installation.