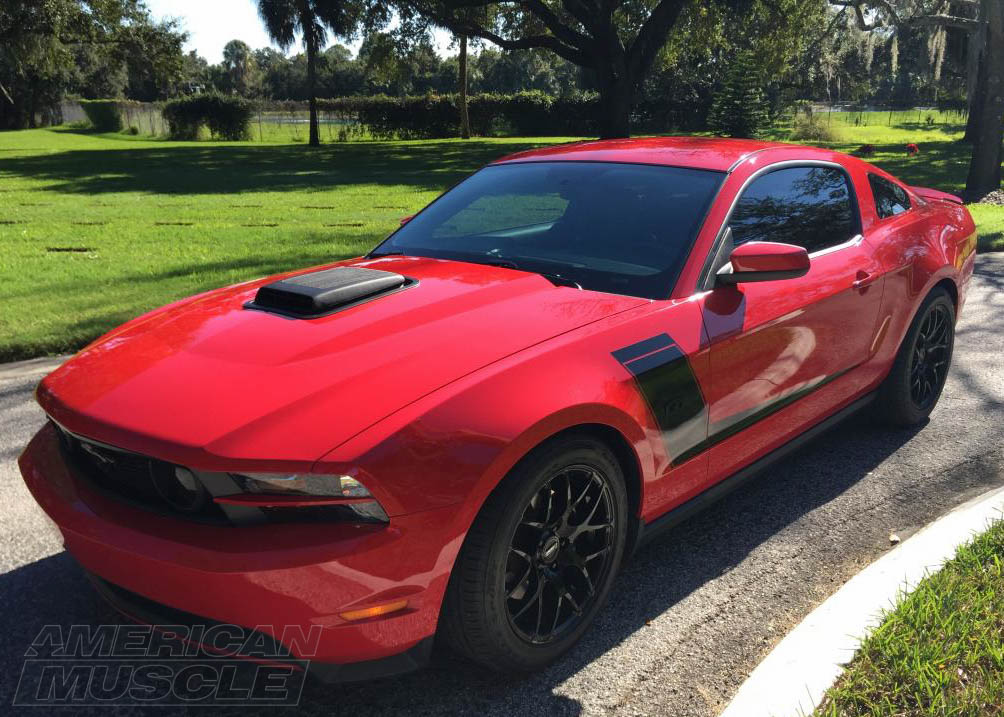 Hood scoops offer much more than that intimidation factor as your pony flies by incoming traffic on the highway. They provide a little bit of performance boost and styling that makes your Mustang ready to rock. They’re also very popular; try spotting a Foxbody Mustang without a hood scoop installment. Aside from their appealing styling and aerodynamic design, they’re also an important addition to your air intake system. Add a retro look to your old pony with a shaker scoop or a complete performance boost with an intercooler hood scoop conversion. Not only is a hood scoop installment incredibly cheap, they virtually pay for themselves over time by improving fuel economy. There’s no reason to purchase a pony if you don't want to make it scream!

Hood Scoops add a distinctly old school muscle car look while also providing improving air flow through modern engineering. Capitalizing on sleek aerodynamic designs a hood scoop will give your pony a breath of fresh air and improve mpg. An upgraded hood scoop is a great modification for the enthusiast who wants to improve their performance and look good while doing so.

How do Hood Scoops Function?

Hood scoops are designed to suck in cool air during vehicle operation and feed it directly to your engine. To accomplish this, the placement of the hood scoop and its design are critical. A hood scoop must be in a high-pressure zone on your hood. For this reason, many vehicles have their hood scoops located near the cowl of the hood where the curvature of the windshield creates a high-pressure zone for air.

Through a small inlet, a functional hood scoop sucks in air at a higher pressure allowing it to feed more air to your engine. A tight connection to the air intake manifold must be sealed and allow for the shortest pathway possible for air to reach your engine. This effectively forces your engine to breathe all its air through the scoop while driving. Considering the air being sucked through the scoop is cooler than the air located outside of your cramped engine block, this allows for greater combustion and thus improved power.

Hood scoops effectively act as a cold air intake system. Cold air intake systems are also compatible with hood scoops that use a forced induction system, allowing for the same cold airflow when idling or driving at slow speeds. It’s important the scoop tube or channel is insulated from engine bay heat. A poorly designed hood scoop could be more detrimental to your Mustang’s performance than choosing not to purchase one.

There are also non-functional hood scoops or closed hood scoop systems which are purely for aesthetic design. These are more aerodynamic than an open hood scoop, still adding to your Mustang’s fuel economy.

On the other hand, there are hood vents that allow your engine to release heat generated from the engine bay. These also improve performance, but don't offer the same capabilities a hood scoop does. Many factory Mustang models already feature hood vents, and replacing a heat extractor is cheap. Of course, for total performance, a hood scoop near the cowl will offer your engine greater performance capabilities and increase its life. 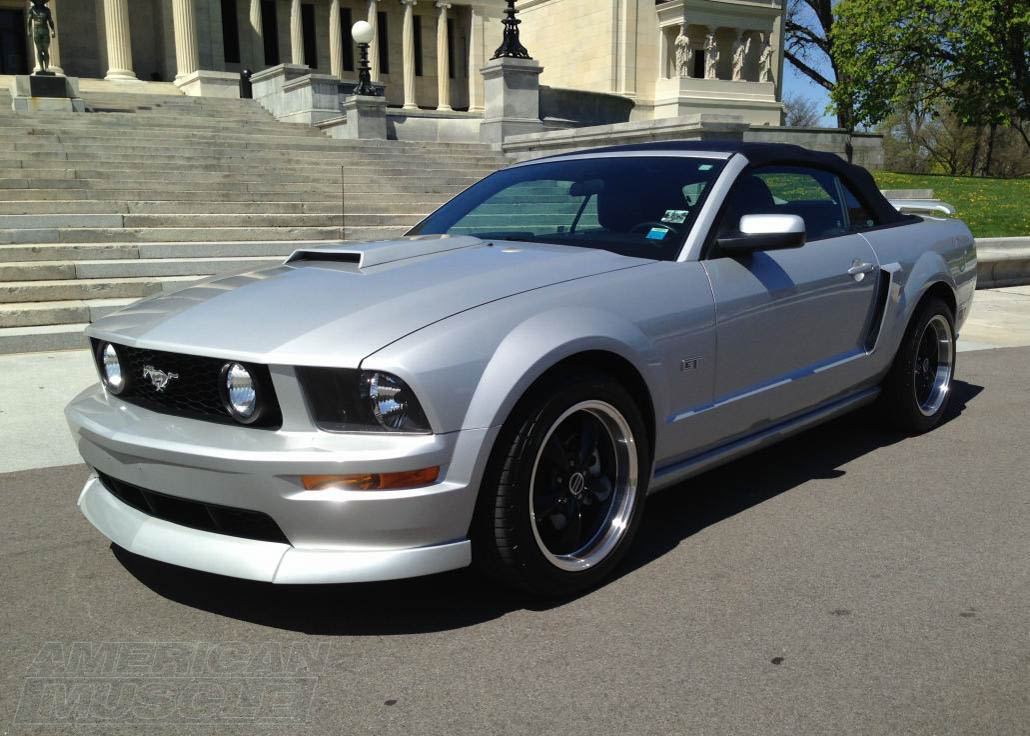 Pros and Cons of a Hood Scoop

Ram Air Scoop: These hood scoops are simply designed with a shorter tube and smaller air inlet to channel higher pressure air to your engine than a traditional hood scoop. At high speeds, this system creates resonance or a supercharging effect for your engine, greatly increasing its acceleration and speed. For newer Mustangs, you’ll often find ram air hood intakes near the center of the hood or toward the front behind the grille.

Intercooler Scoop: An intercooler scoop is designed to provide high-density, cooler air to your intercooler to reduce the temperature being generated by your compressor. These accompany supercharger systems that tend to generate lots of heat near the engine block. Intercooler scoops are simply there to facilitate the effectiveness of the intercooler system.

Heat Extractors: They come in sets of two and require you to cut into your hood to add them right over the shock towers.

Hood Vent Scoops: Similar to extractors, but instead of burrowing into the hood, they are raised slightly above the hood line to suck cool air in.

Twin Opening Hood Scoop: – similar to the standard hood scoop, but there is a piece in the middle of the scoop, separating the opening into two parts. 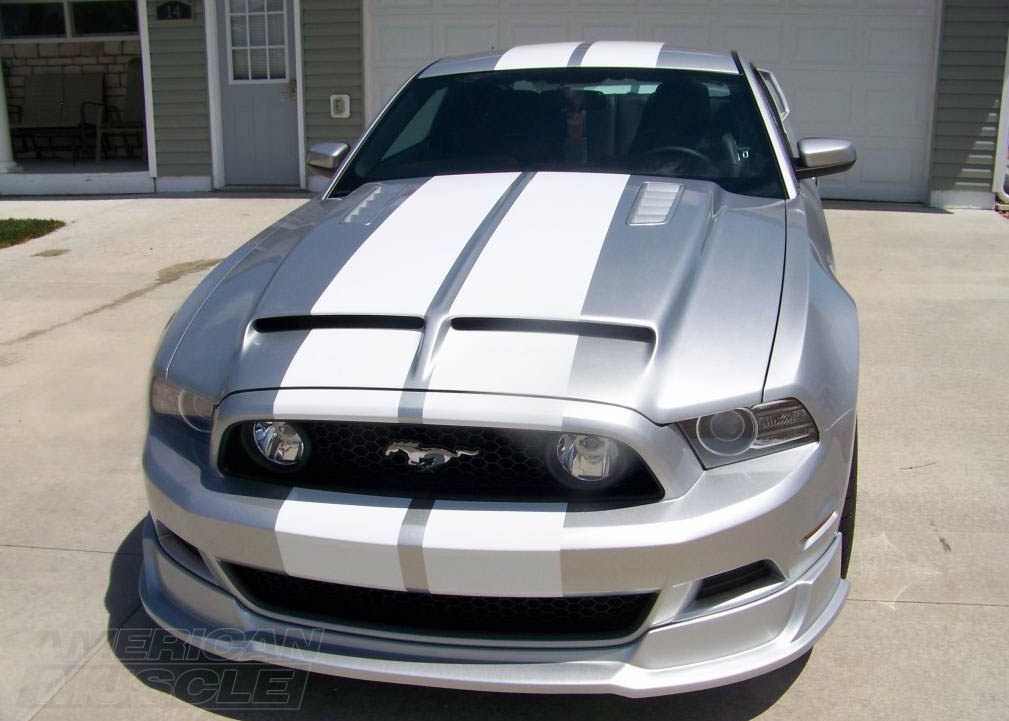 It’s important you find a hood scoop fitted for your Mustang’s model and its specifications. We reiterate that a poorly designed and installed hood scoop could end up doing more damage than good. Consider these factors when purchasing a hood scoop.

Model: Due to different front body designs and the rapid transformation of the Mustang, hood scoops are not universal to every model.

Installation: Installing a hood scoop will depend on the type of hood scoop and Mustang model it’s being installed on. Installation varies, but we seriously recommend professional assistance, so you can accurately measure and fit your hood scoop for optimal air flow.

Application: If you’re building a track-only/racing pony, then a functional hood scoop will do the job. Of course, a ram air intake will provide more power at top speeds which is ideal for drag racing. If your Mustang has an intercooler system then you’ll obviously need an intercooler scoop instead a functional scoop to get max performance out of your vehicle. 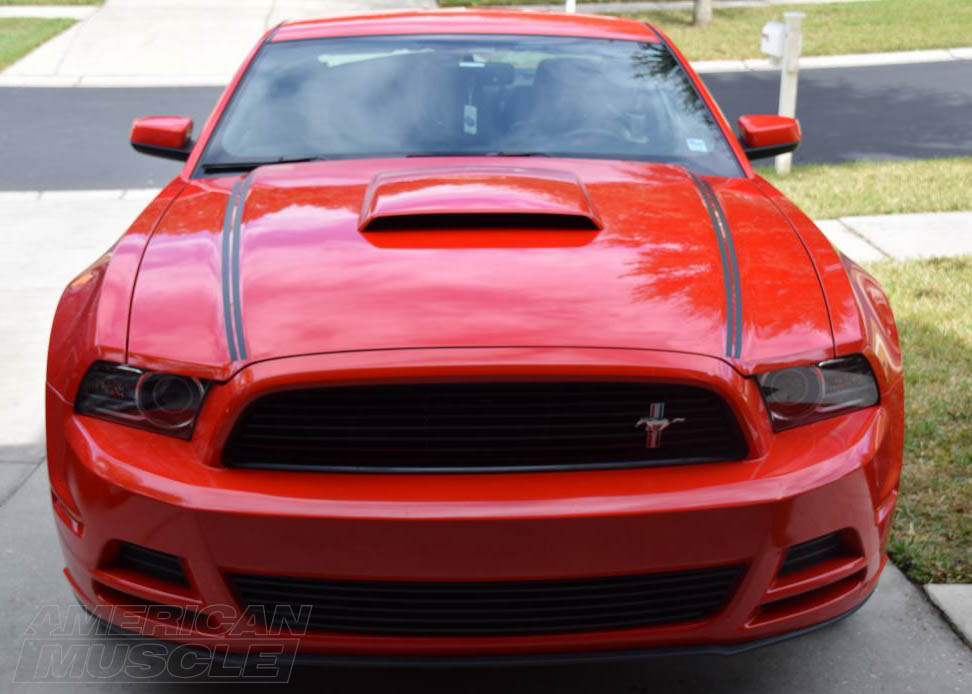 What about Shaker Scoops?

For that truly retro 60s muscle car look, consider a shaker scoop. Shaker scoops are compatible with your stock air intake system and attach to the air cleaner through a small hole in the hood. These will often look like an exhaust tube sticking out of your hood.

These work the same as a ram air intake, creating a supercharger effect. These are primarily outfitted for stock racers. They’re called shaker scoops because they cover the engine and vibrate with the engine. Installing a shaker scoop requires professional assistance, and is more expensive than other hood scoops. 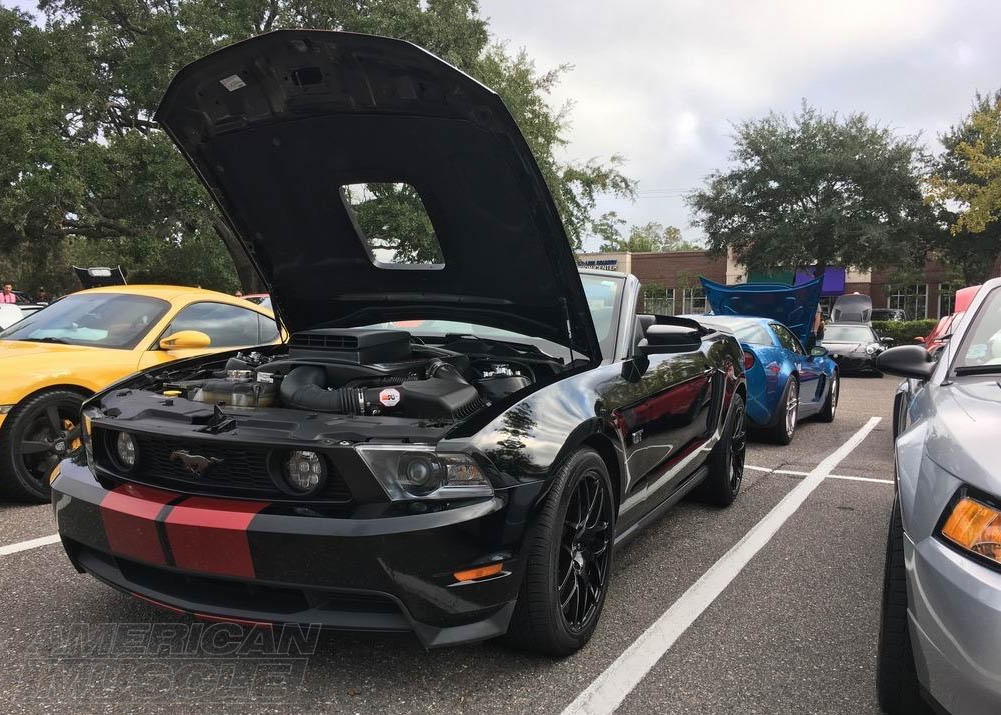 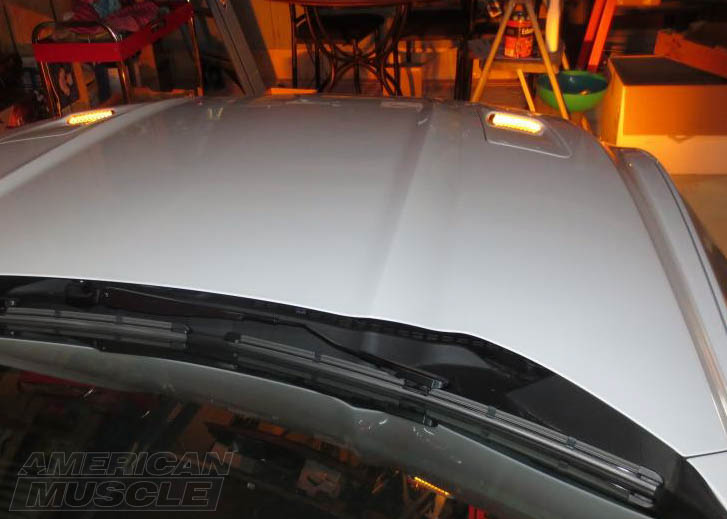 Side Vents with Turn Signals w/o Hood Scoop

There are a few different styles of side scoops for Mustangs, such as:

Are There Any Performance Benefits to Side Scoops?

There are no performance benefits to adding side scoops to your Mustang. They are strictly an appearance mod. You can customize them and cut into your body/wheel well liner to offer brake cooling, which is what side scoops were initially designed for. However, this isn’t recommended unless you have extensive knowledge and experience with bodywork or ducting to set up the cooling.

How Hard is it to Install Side Scoops or Hood Scoops on My Mustang?

Installing side scoops or hood scoops is just about one of the easiest upgrades you can make. All you need to do is prep the surface and the scoop and properly apply the durable and strong 3M automotive double-sided tape and press firmly. There are some parts, like the heat extractors and a few front fender scoops that will require the assistance of a body shop or someone who has bodywork experience, as you will need to cut into the car.

Will Side Scoops or Hood Scoops Require Permanent Modification to My Mustang?

95% of side scoops and hood scoops will not require any permanent modification to your Mustang and can be undone whenever you may grow tired of them. There are a few front fender scoops and a few hear extractor vents/scoops that will require permanent modification to the body, but most will not. If you are uncertain you can look over the description as this will be called out. If you are still unsure, you can ask an expert at AmericanMuscle. 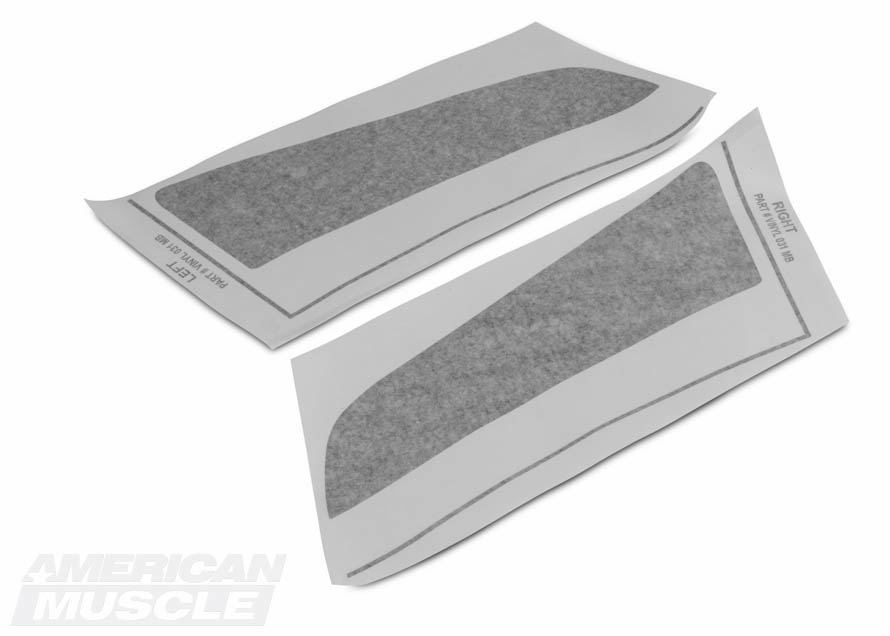