Adding an intake manifold will gain you some big-time horsepower and Torque numbers, adding to the already lethal bite of your Mustang. 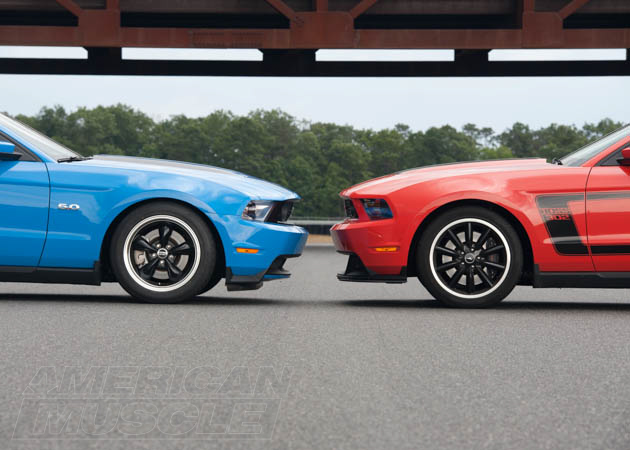 What is a Mustang Intake System?

A Mustang intake can be a vague name applied to either the intake manifold which sits atop of the engine or it can be applied to the cold air/ram air intake system that sucks in outside air into your engine. The entire air intake process for your Mustang consists of:

Cylinder heads can also be considered part of the intake process, but for the sake of staying on topic, this guide will mainly address the three areas listed above along with forced induction setups. 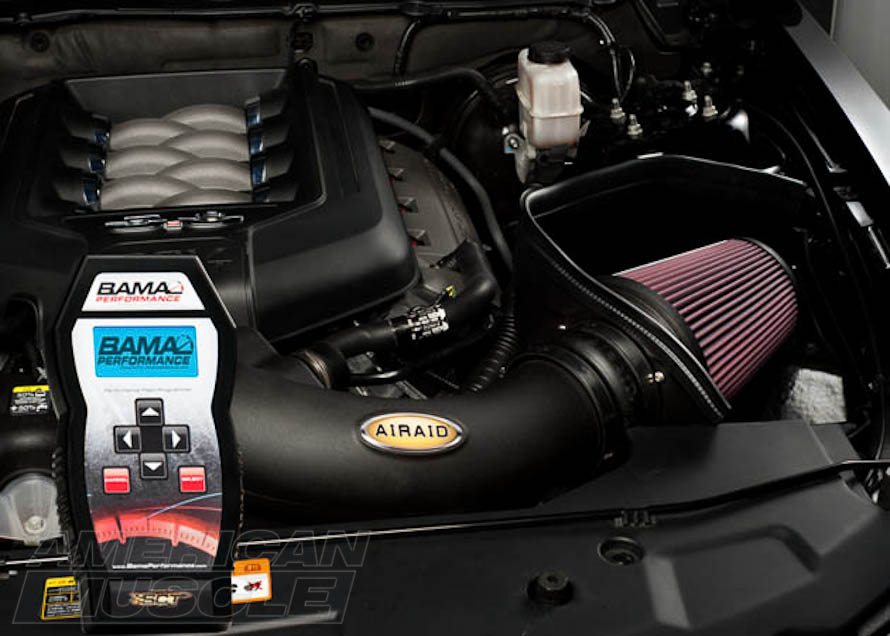 The air intake is where all of the air goes into your engine. It consists of a filter and a tube that connects to your throttle body. There are cold air and ram air intakes. Ram air intakes are less common, short in length and have a wide/large filter that tries to ram a bunch of air into the engine. Cold Air Intakes are designed to have a more open design and a longer tube that can grab cool air flowing in through the front of your Mustang and are the more common upgrade for all Mustang owners.

Cold air Mustang intakes come in a variety of different sizes, with larger sizes (anything really over 95 MM) being better suited for boosted/forced induction engines. Cold air intakes can net you anywhere from 10-35 HP depending upon the intake and the manufacturer as well as the overall size.

Not all cold air intakes require you to tune your Mustang, however you will almost always get more power by pairing a cold air intake with a custom tune. 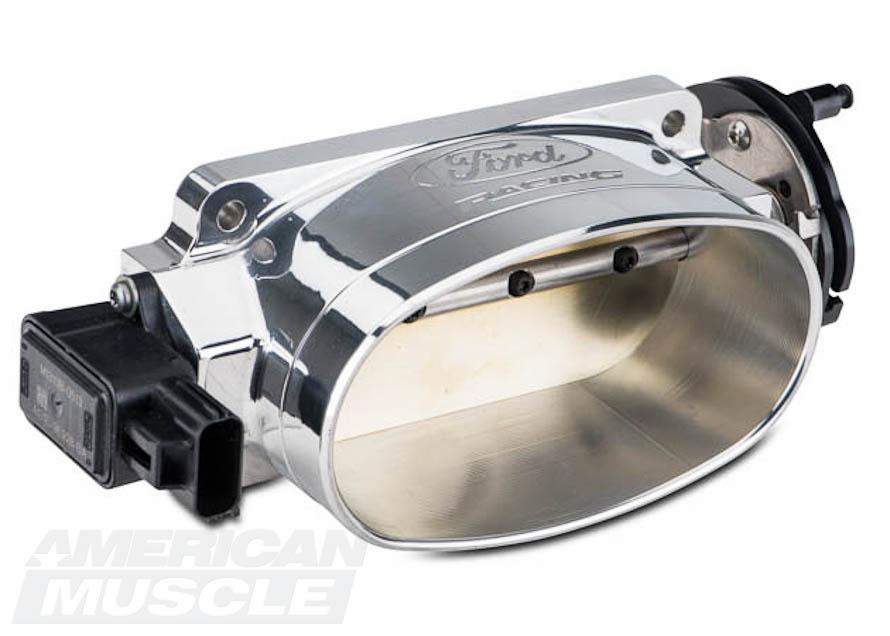 Throttle bodies can be one of the main choke points in a Mustang’s exhaust system as all of the air your intake sucks in has to pass through the throttle body, condensing before it goes into the intake manifold. When looking to achieve higher power numbers and improved acceleration/throttle response, a throttle body is often the key.

For low key, builds, throttle bodies are often not needed, but when you starting trying to go for bigger power increases you will need to upgrade the throttle body. If you go to a forced induction setup with a supercharger, turbocharger, or even nitrous, you will definitely need to replace the stock throttle body with a much wider one.

Mustang throttle bodies can add anywhere from 5-20 HP depending upon the size and your other supporting mods. Not all throttle bodies need to be tuned, however it will without a doubt deliver more power and a much smoother throttle response with a custom tune.

Throttle bodies will have either a single moving opening or dual openings/throttle blades. Typically, single blade throttle bodies (like what is found on the stock setup) are more efficient as they have less impeding the flow of air into the engine; however, large dual blade throttle bodies can perform well and offer an increase in power as well. Single blade bodies tend to make more power than duals, but it really varies on a case-by-case basis.

There is also a difference in single blade throttle bodies between circular and oval throttle bodies. Circular ones are what the Mustang has stock and offer quick, snappy throttle responses.

Oval Mustang throttle bodies are needed for supercharged applications and some intake manifolds and can suck in more air than a circular body. Oval bodies are like a fusion of a single circular blade and a dual blade throttle body, but without the air blockage.

Oval Mustang throttle bodies require more careful tuning as they can suffer from throttle hand, where the throttle body blade closes slower than you release off the throttle, hanging open. 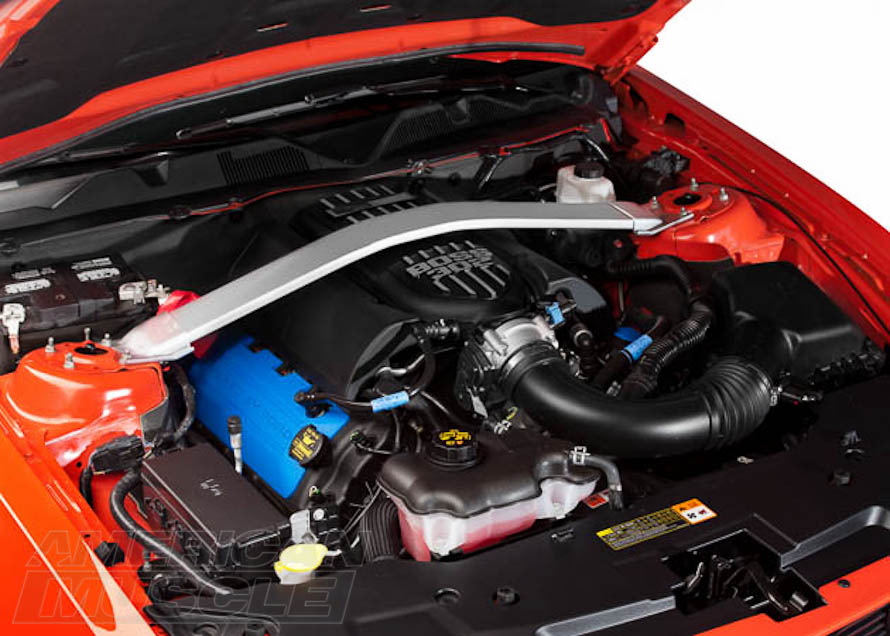 The intake manifold takes the air fed into it by the cold air intake and throttle body, distributing it to the engine’s cylinders. Intake manifolds have “runners” that are small tubes about the width of a golf ball that supply the air into the cylinders. Shorter runners tend to be better for low end torque and mid-range pull, but longer runners are better for overall peak HP, high end power, and increasing the redline.

Depending upon your Mustang and supporting modifications, intake manifolds can add anywhere from 15-50 HP and will almost always require you to tune your Mustang. While naturally aspirated Mustang engines will benefit from upgrading the factory intake manifold, centrifugal superchargers and turbochargers will benefit even more so as the improved air management of the intake manifold will yield even higher power numbers. 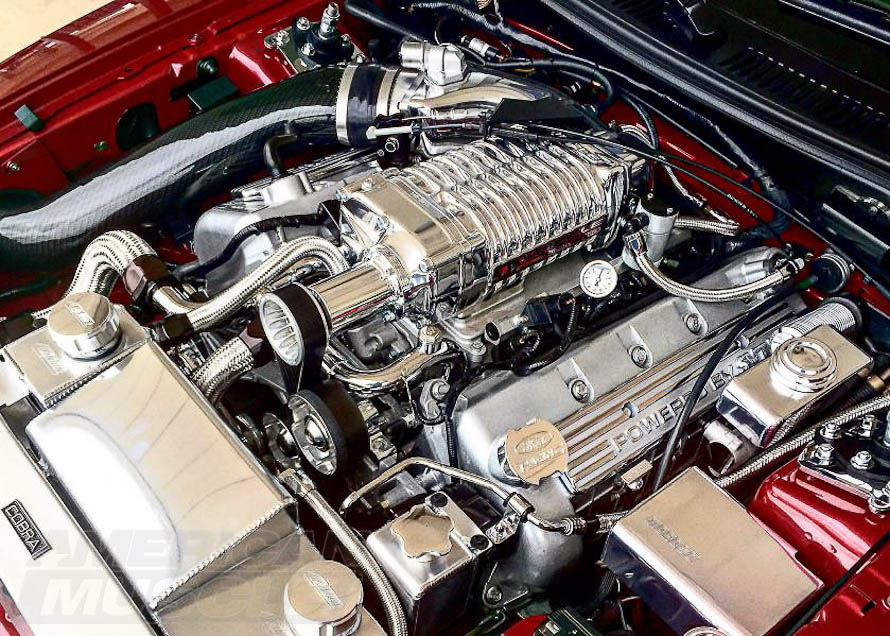 Roots style or twin-screw blowers that set atop of your engine replace the intake manifold with the supercharger unit itself. While a turbocharger or centrifugal supercharger will greatly benefit from an aftermarket Mustang intake manifold, a roots style blower incorporates it into the design and packages everything into one unit. This is why roots style blowers tend to have a lot quicker of a response time to get into boost, which begins very low in the RPMs for those setups.

A popular modification that many enthusiasts have taken on themselves at home with a dremel tool is porting their stock or aftermarket intake manifold. Porting a manifold entails shaving down the inside of the runners to increase the diameter and the amount of air they can feed into an engine. Porting an intake manifold requires a steady hand, a specific set of tools, and a solid grasp of what you are doing. 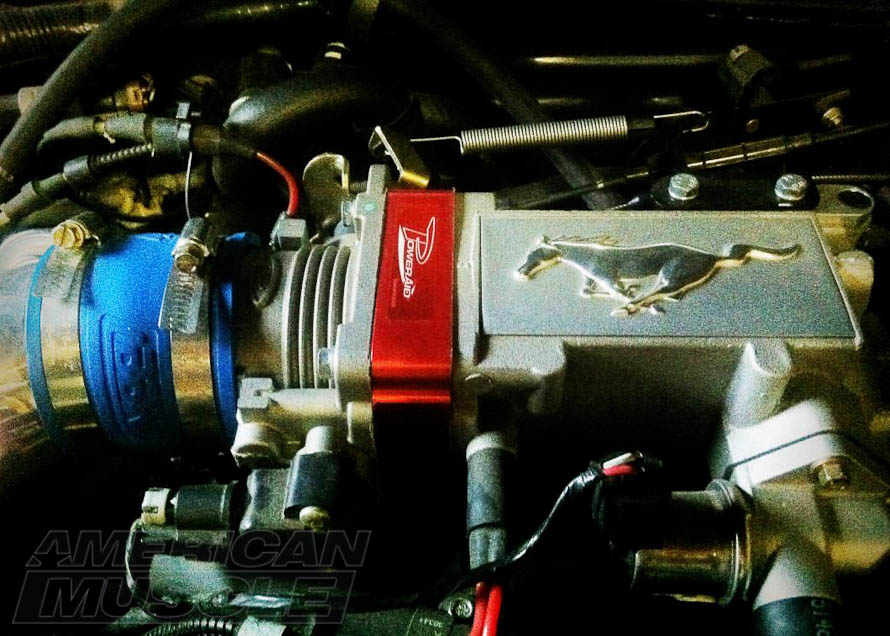 5 Things to Consider When Choosing a New Intake Plenum

Switching out your throttle body is an easy and quick way to get more airflow into your Mustang’s engine. In almost every case, more airflow means more power, and what Mustang owner doesn’t want more rear wheel horsepower? Upgrading the intake plenum to a 70MM or a 75MM diameter on a stock or mildly modded Stang will certainly net you a couple extra ponies. Here are few things to consider when you’re in the market for a new intake plenum. 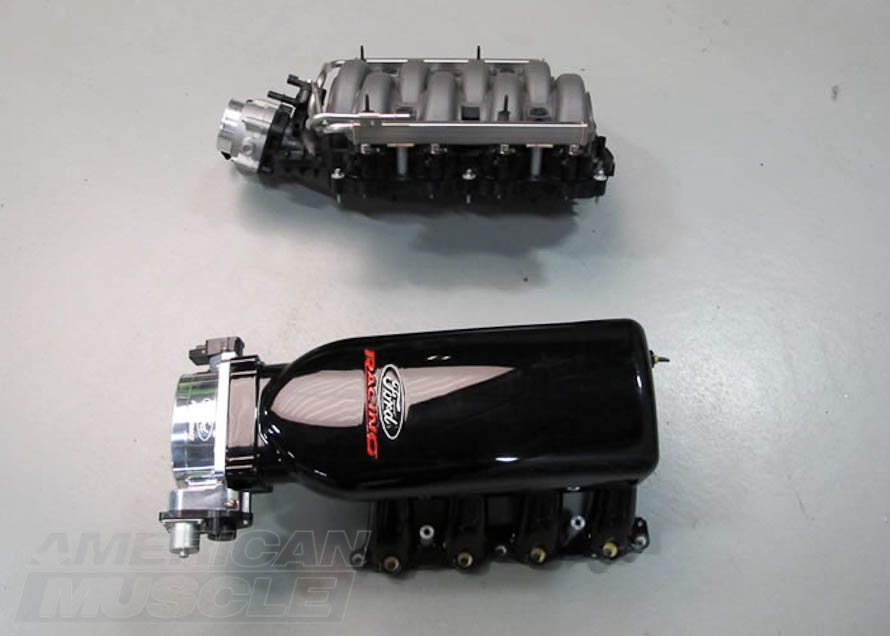 Boss vs Cobra Jet Intake - Which Is Better? 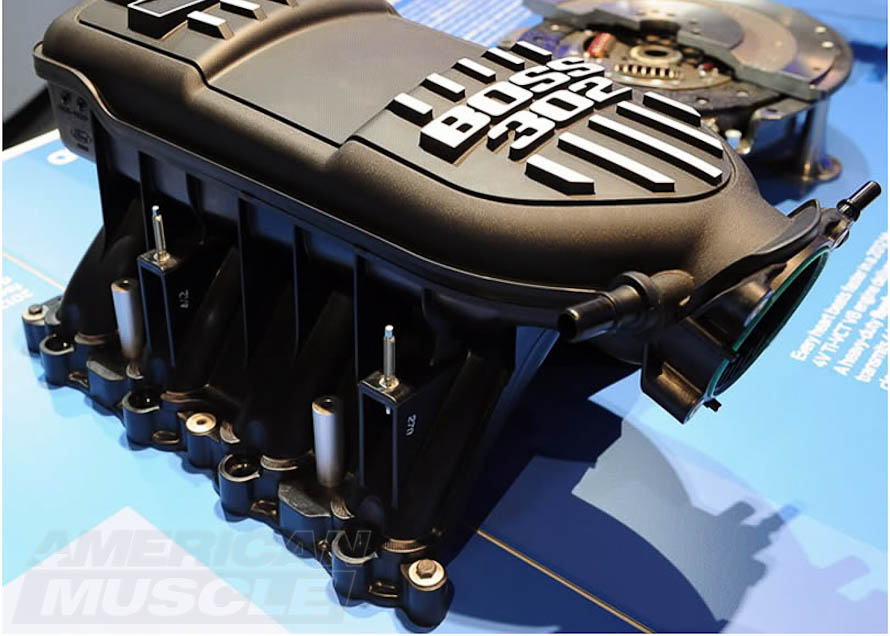 As previously stated, the factory intake plenum works very well within the stock environment, however, not quite as well as the plenum provided to assist getting air into the BOSS 302. The best part about the BOSS intake plenum is it allows the GT mustangs from 11 to become visually identical under the hood to the BOSS. As an added bonus, the installation of this intake is fairly straightforward and does not require any other expensive components to be changed for the plenum to function at 100%. The clean lines and factory badges of the BOSS intake plenum make this an appealing modification not just for performance improvements, but also for those looking to improve the aesthetics under the hood as well.

As you can clearly see in this picture of the BOSS intake plenum, it has longer runners, and a top feed design for incoming air. This design allows for more air to flow into the cylinders for combustion and more power during high RPM situations, at a cost of slightly less performance down low in the RPM range when comparing it to the stock coyote plenum; typically, enthusiasts have seen an additional 27 peak HP with anywhere from no TQ loss to up to 10 TQ loss. It is also important to remember that in order to take advantage of the increased airflow the BOSS plenum provides, an aftermarket tune is required.

The Boss intake manifold is compatible with 2015 Mustang GTs as well. The Boss intake manifold is a popular choice amongst enthusiasts looking to go with centrifugal superchargers or turbochargers as it can hold 2 bars of boost, which is around 28 PSI. On the 2015+ 'Stangs, the Boss Iitake hits peak power at 7,600 RPM, but pulls all the way up to 8,000 RPM (pulling strongly from 3,000 RPM to redline). The two things holding the Boss intake manifold back is the throttle body opening and the grove in the top for a strut tower brace. Both design features limit the volume of air the Boss manifold is able to take in, and in turn can cause it to lose a little bit of torque on the low end of the RPM range.

Another option for those with the need for even more airflow, and who also have a sufficient supply extra cash lying around, is the Cobra Jet Intake Plenum. This item is included on the factory produced 2013 Cobra Jet Drag Car, and is available as an add-on accessory to the coyote motor. It produces power very similar to the BOSS plenum but produces more top-end horsepower while sacrificing less low-end torque than the Boss Intake; users typically see around a 25 peak HP increase with no TQ loss. For those with a major need for more airflow, go with the Cobra Jet. 5.0’s with mild mods or minor plans to add power would be better suited with the Boss intake. The Cobra Jet plenum also requires the use of a GT500 throttle body, and other supporting mods such as an intake tube and air filter.

The design of the GT350 manifold is similar to the stock intake manifold, however it is able to displace a large volume of air more efficiently than the stock manifold.

Stock vs Boss vs Cobra Jet vs GT350 Manifolds by Power

In an independent test conducted by StangTV, they used the same engine with all three different intake manifolds to find out which makes the most power. According to their test results, they performed as follows:

Looking at this from a strictly horsepower perspective, the Cobra Jet manifold puts down the most power on the dyno, however it doesn’t mean it is the best for every build. 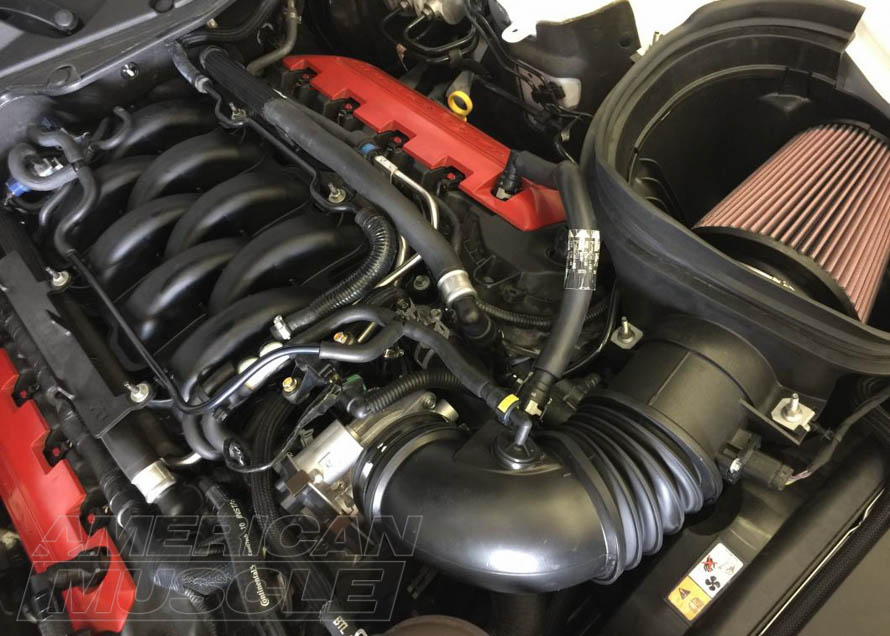 What Intake Manifold is Best for My Mustang?

If you are going for straight-line performance and high-end power, then the Cobra Jet manifold makes the most sense. If you aren’t concerned with racing and just looking for a little bit of an upgrade over stock, then going with the Shelby GT350 manifold for 2015 Mustangs is a good choice, and the Boss intake manifold for 2011-2014 Mustangs.

What Mods Support an Intake Manifold?

Aside from the intake manifold, you’ll need a few other supporting mods to ensure your Mustang functions properly. This includes:

Aside from those necessary upgrades you may want to also consider upgrading the fuel injectors and exhaust system to maximize the gains from the intake manifold. 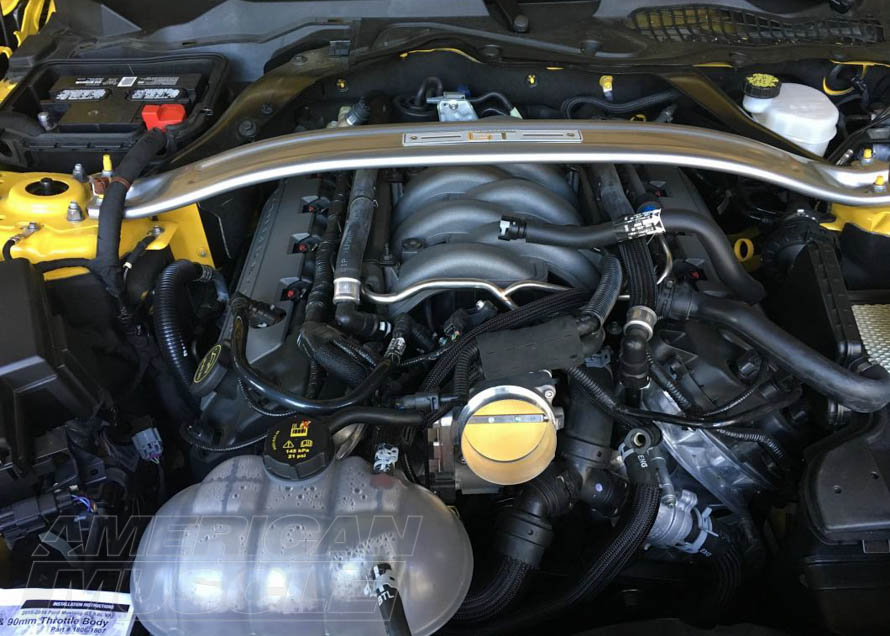