Most Popular in Challenger Audio Systems

Rockin’ Out with Your Challenger’s Audio System: Speakers & Amplifiers

Sometimes the road to crystal clear tunes is a change in speakers. Other times it's getting a better amplifier for you existing system and finding a quality set of sub woofers. No matter your tastes in music, you can benefit from swapping out the Challenger's standard audio equipment for a system that can handle every chord.

Jamming out to your favorite tunes while cruising down the road is one of the great appeals to cruising down the highway in your own Challenger. Unfortunately, the stock stereo probably isn't up to snuff, and if you're not familiar with audio systems, upgrading the Challenger's setup can be a daunting idea. Rest assured we can assist in that vein. 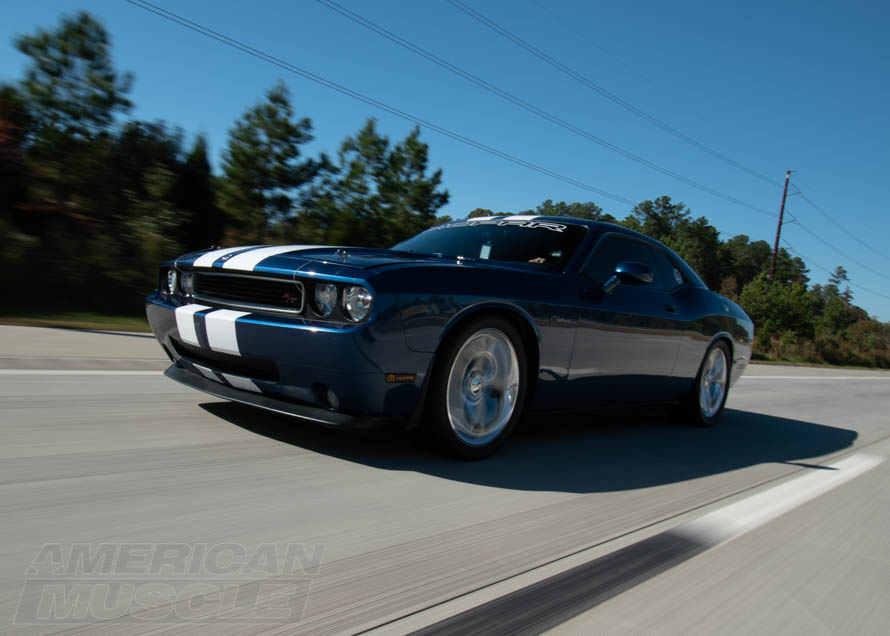 2008-2014 era Dodge Challengers came with a choice of three separate sound systems. The base Boston Acoustics stereo features a simple AM/FM radio with CD and MP3 capability and a total of four speakers (4 ohm impedance speakers) providing sound –a 6x9” located in each door and 6.5” speakers located above the rear seats. Sound Group I upgrades to a better 6-speaker, 2 ohm Boston Acoustics system with 3.5” tweeters in the front dash, a new head unit, and a 276-watt digital amplifier. A Sound Group II package, again a Boston Acoustics system, adds a central speaker to the dash and provides a total of 376-watts of digital amplification. The heavy hitting OEM sound system for this generation of Challengers comes in the form of a 13-speaker KICKER audio system. In addition to the same sized door (full range), rear seat (coaxial), and dash (coaxial) speakers as above, this SRT-trim audio system also adds a full sub in the trunk  (with 200-watt amplifier) and uses a 322-watt digital amplifier to keep the tunes turned up.

2015-2018 generation Challengers saw a shift from Boston Acoustics to Alpine sourced stereo systems. The entry level system, listed as Six Premium Speakers on Dodge’s official feature and availability sheet, are the same sized 6x9” speakers in the door, 6.5” speakers in the rear seat shelf and two 3.5” tweeters up front. The tweeters and rear speakers are coaxial units. The next tier up, Sound Group, steps up to a higher line of Alpine speakers and integrated a 276-watt digital amplifier. Sound Group II adds another three speakers (for a total of nine) and ups the digital amp to 509-watts. Finally, the Premium Sound Group option packs a total of eighteen Harman Kardon high-performance speakers throughout the interior. Two 6x9 subwoofers reside in the doors, three midrange 90 mm speakers with 16 mm tweeter are placed along the dash, two in the ceiling, and three in the rear seat deck, and last but not least two 10” enclosed subs sit in the trunk. All in, 900 watts of amplified power produced using a class-D 11 channel amplifier.

Despite Dodge’s effort to improve sound quality using an integrated digital amp and sequencer, the reality is that the speaker quality is low. The result is an uninspiring listening experience when the volume is set at anything other than a medium level. Even the top of the line systems, while certainly packing more punch, lack acoustical depth, clarity, and tuning at low or high frequency ranges. The solution to your Challenger’s audio woes is to upgrade the stock system with aftermarket speakers, and if you really want big sound, an aftermarket amplifier as well. Surprisingly, just a simple speaker swap is enough to make a dramatic difference.

The first thing to do when looking to upgrade your Challenger’s stereo system is to ditch the factory speakers. A quality set of aftermarket speakers will have more power, depth, and produce clearer sound across the entire decibel range. A larger speaker is best suited to producing low frequency sounds as it gets more and more difficult to drive a larger speaker at the rate needed to produce a high frequency sound. These types of speakers are often called woofers. Tweeters, on the other hand, are very small speakers driven at a very fast rate in order to produce high frequency sounds. A full range speaker is a speaker sized to compromise between the bass heavy woofers and the treble focused tweeters.

A 2-way speaker, which is what is used in the dash and rear seat shelf, is a two-in-one unit that features a larger woofer style speaker overlaid with a tweeter. Driven separately, the woofer and tweeter each have a specific range of audio frequencies in which they excel. Thus, by overlaying them, they produce a full range sound. Of course, the tweeter and woofer have an overlap of produced frequencies, as it is impossible (or it would sound terrible) to have the tweeter pick up precisely where the woofer ends (i.e: woofer produces sound between 30 Hz – 12 Khz and the tweeter works from 10 Khz –  30 Khz). This effect is called crossover, and in and of itself could be an entirely separate topic.

A 3-way speaker splits the low, medium, and high range frequencies between 3 drivers – all integrated into one unit. Ideally, this allows for better sound quality throughout the entire range of audible frequencies as each driver is further refined to a particular range. On the other hand, 3-way speakers are more expensive and are more difficult to properly integrate into your Challenger’s sound system as they require both a high and low pass filter.

Many factors go into deciding between the two. There is amazing 2-way and 3-way speakers out there and simultaneously there is terrible versions as well. The best piece of advice would be to go with a well-known manufacturer and stay away from their lowest model line.

Depending on the year and how your Challenger is outfitted, Dodge offered AM/FM/CD player head unit at the low end of the spectrum and a 8.4” uConnect touchscreen media center at the high end. With the ever increasing technological capability of the Challenger, the media systems are becoming more integrated with other systems (such as steering wheel controls, navigation, even climate control) and replacing the head unit may just not be feasible because too many features will be lost. That said, you can still keep the factory head unit and have a booming stereo as well. Of course, the factory unit and amplifier is unlikely to be able to provide the necessary power (average and peak) to an aftermarket speaker setup and thereby audio quality will suffer.

What is an Amplifier?

The purpose of an amplifier is simple; its job is to provide the necessary power to drive the speakers in order for them to produce the best sound they can.

Speakers come with two ratings, a peak wattage and an average wattage (RMS). Peak power is the power level at which the speaker can be driven without distorting. A speaker that is rated at 200-watts peak means at a supplied power level above 200-watt, it will certainly distort the sound and likely physically damage the speaker itself. RMS power is the continuous power level at which a speaker can be driven without damage (RMS is always lower than peak).

Installing an aftermarket amp in conjunction with upgraded speakers will have a profound effect over the OEM gear. Clarity, depth, and overall volume will be significantly boosted.

How do I Pick an Amplifier?

Picking an amplifier is mildly tricky because there are so many variables to consider. The first issue we encounter when outfitting a Dodge Challenger with an aftermarket amp is compatibility with the stock head unit. The Challengers use a CANBUS digital audio signal which is a totally different interface than a traditional RCA line level input/output. Thus, an adaptor will need to be wired in (not that this is complicated, it is just something that needs to be noted). The remaining variables to consider are channels, impedance, and of course, power output.

Amplifiers come rated with a certain amount of channels, essentially signifying how many speakers it is able to run. For every speaker you want to run off the amp, you will need a separate channel. For example, if you want to only run the door speakers off an amp, then a 2-channel stereo amp would suffice. A 4-channel amp is the most common, of which is capable of driving 4 coaxial speakers. What if you want to power 4 speakers and a sub? Well, in this case you could buy another amplifier specifically for the sub. Or, there are some voodoo tricks you can use with one amplifier in order to increase its total connectivity.

It is possible to bridge the channels of an amp together to power something else. For example, you could have channels 1 through 4 each powering a set of speakers, but then have channel 3 and 4 bridged together and also powering a sub. Cost per watt in this case would be the lowest, and given that a sub does not require a stereo input nor fade or balance control, a bridged connection would have little effect on performance (bridging channels loses fade and balance control).

Another variable to consider is channel impedance. Every speaker is rated, in ohms, at certain impedance, and subsequently amplifiers are rated as well. At a minimum, each channel of the amplifier must meet or exceed the rated impedance of the speaker. A lower impedance means more power will be delivered to the speaker, but on the other hand if the amp is delivering too much power then both the speaker and amp could be damaged. Thus, if a speaker is rated at 4 ohms you should be using a channel that is at least 4 ohms or higher. With a higher impedance, less power is delivered to drive the speaker, but this will not damage or distortion. Of course, the way you wire in the amplifier and speakers can affect the nominal impedance as well, which is an entire subject on its own.

Finally, you need an amplifier that can provide the necessary capacity to all the speakers you want to hook up. A main issue with the OEM stereo system is that the factory amp is underwhelming (and frankly, so are the speakers) and unable to drive the speakers with enough oomph. Choosing an amp that meets or exceeds both the RMS and peak wattage values ensures each speaker has an interrupted flow regardless of volume setting. If a speaker is rated at 50-watts RMS and 125 peak, make sure the amp channel is capable of at least providing those two values, but realistically speaking, the amp should have a considerable margin over the bare minimum (50-75% more than what is needed).

Dropping in a new booming stereo into your Challenger will, without doubt, increase the electrical strain placed on the alternator and battery. The good news is that as of 2008, all Challengers are equipped with a 160-amp capacity alternator. For a mild to moderate stereo system upgrade, the stock alternator should suffice. If going all out and installing some monster subs with amps, it is at this point you may begin to see some strain on the electrical system. In the case of dimming (which is usually what happens when a banging audio system puts too much load on the electrical system), upgrading the battery to one that is made for deep and continuous discharge cycles (Optima Yellowtop comes to mind) can help with this issue. Alternatively, you could install a capacitor or best of all, a second battery.