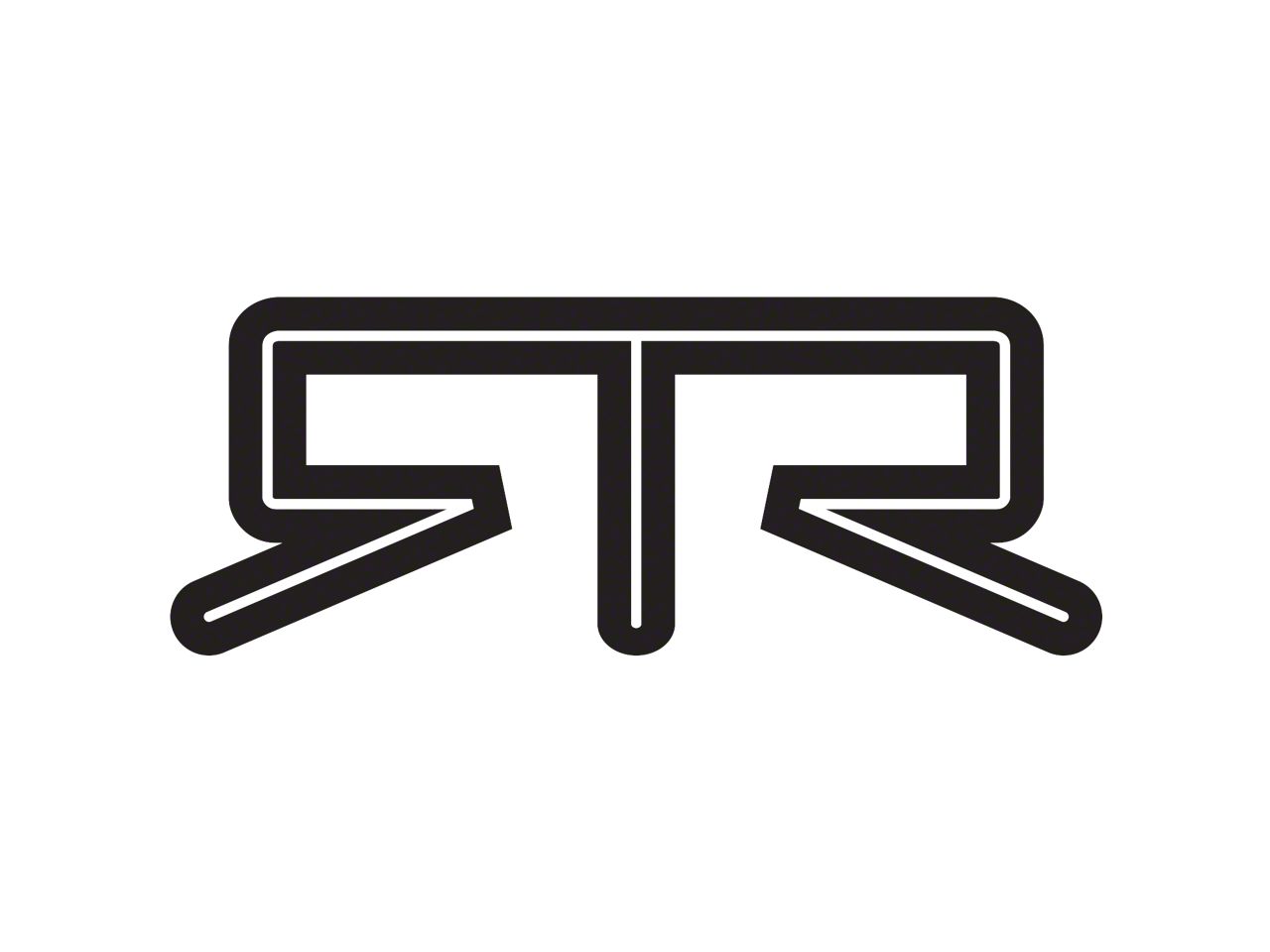 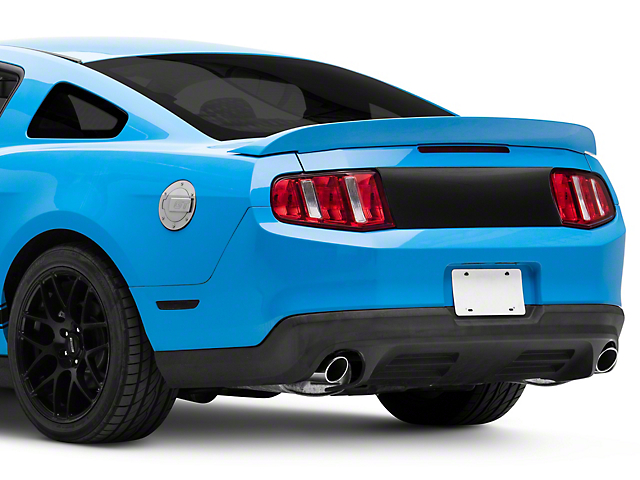 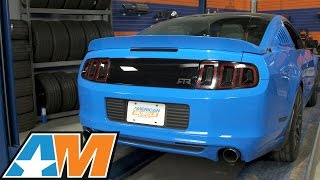 Hey guys, Stephanie with AmericanMuscle.com, and this is my review of the RTR Decklid Panel for all 2010 to 2014 Mustangs. The RTR Decklid Panel is going to be for the S197 owners out there that are looking for a flush decklid panel that's going to get rid of that fake gas cap looking thing that's front and center on the rear of the S197, and give their Mustang more of a clean feel. This panel, along with the CDC panel, are the only decklid panels available right now that are eliminating that cap, and the RTR here is the only smooth panel, which is going to give a different type of look. So one of the first things that I noticed here is the fact that this panel has a gloss black finish, which, in true RTR fashion, is also different than the majority of decklid panels that are out there. I think that the finish of the panel does help it to blend in, and look like it belongs with the factory taillights.But RTR hasn't left this panel with just a gloss black finish. It may be hard to see here, but there's a small RTR logo in the lower corner here, just to help set this thing off some. It's nice that it isn't over the top, and if you really don't like it, it can be removed, to better suit your tastes. This is made from ABS plastic, which is intended to offer more durability, and a longer lifespan than other materials. And if we flip it over here, you can see that there is 3M tape already pre-installed on the back, to help make it an easier install.I did mention earlier that this panel is a flat panel that's going to eliminate the fake gas cap in the rear, which is a good thing in my opinion. And that, along with the finish, are going to help this panel give your Mustang a different look. This decklid panel is going to run you right around the $200 mark, which is going to be the top of the line when we compare it to other decklid panels on the site. But this is an RTR signature piece, designed by Vaughn, that's unlike the other decklid panel options out there. As far as the install goes, it's pretty straightforward, but it can be a little tricky, since there is some cutting involved to get that flush look.So you're going to want to make sure you have a few things before you get started, with a Philips head, a plastic panel tool, some scissors, and of course a tool to do some cutting with. The most difficult part of the install is going to be the cutting, of course. But after all of this is done, you can have a nice flush panel. Depending on which method you choose to get your panel flat, you might want some masking tape, and a blanket to catch some of the metal shavings. The first thing you're going to want to do is open the decklid and remove the two screws that secure the lower corners of the factory churn panel. Then remove the factory panel using a flat panel tool.There are some plastic clips on the backside of the panel, but they aren't difficult to get to. Now you can see the bump in the surface that you're going to want to remove, and I just want to point out that there are many different ways that you can tackle this next step, but you should use the method that you're most comfortable with. RTR suggests using either an air body saw or a hole saw to remove the bump. After that, it's just a matter of pressing the panel into place after the backing is peeled off of the 3M tape. Overall, you're probably looking at an hour tops, and because of the cutting, I'm going to call this a two out of three wrenches on our scale.Okay, so wrapping things up here, the RTR Rear Decklid Panel is going to eliminate that fake gas cap on the '10 to '14, and give a smooth, gloss black blacked-out look. It's made from ABS plastic, it isn't hard to install, and it's a touch different than the other options that are out there. So if this is something that you like the looks of, feel free to check it out more online for yourself. I'm Stephanie, and for all things Mustang, keep it right here at AmericanMuscle.com.

View Full Transcript
Ready To Rock! Add the same aggressive race car styling of Vaughn Gittin Jr.'s "Ready To Rock" race car to your 2010-2014 S197 Mustang with this Rear Decklid Black Out Panel that features the RTR logo in the lower Right Side corner.

Quality Construction. Manufactured from ABS Plasic, this RTR Rear Decklid Panel features a gloss black finish for intimidating good looks and long lasting durability. The factory deck lid panel isn't trimmed and requires you to cut it to specs for a proper fit on your Mustang.

Application. This RTR Rear Rear Decklid Panel is the perfect appearance upgrade for all the 2010-2014 Mustangs, including the V6, GT, Boss and Shelby GT500 models.

Can the RTR logo be removed?

Helpful (15) Thanks for your input!

Will the 3m tape on the back of the panel be enough to waterproof and keep the rain out of the hole you have to cut in the trunk?

Do you have to cut into your trunk for this part to fit perfect?

This looks like the same finish as the factory decklid panel. After a few years there's a lot of fading at the bottom of it, would this have the same problem? 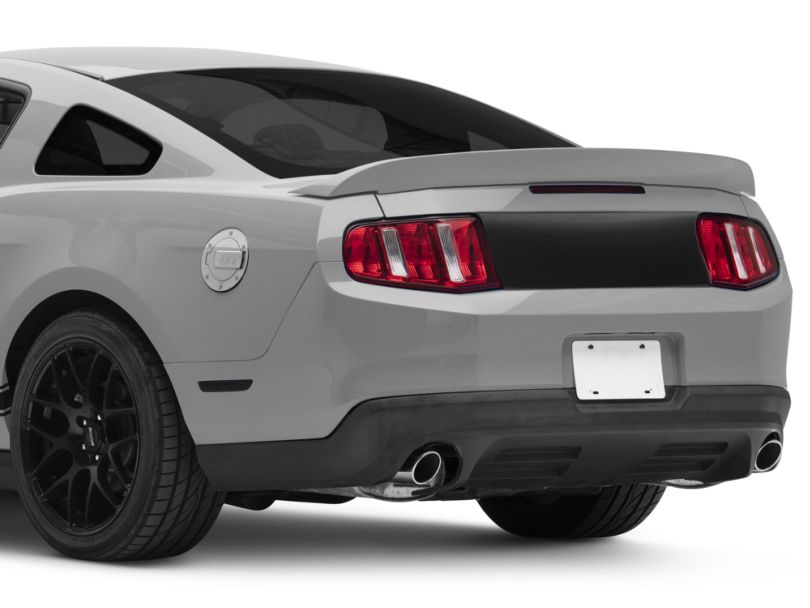