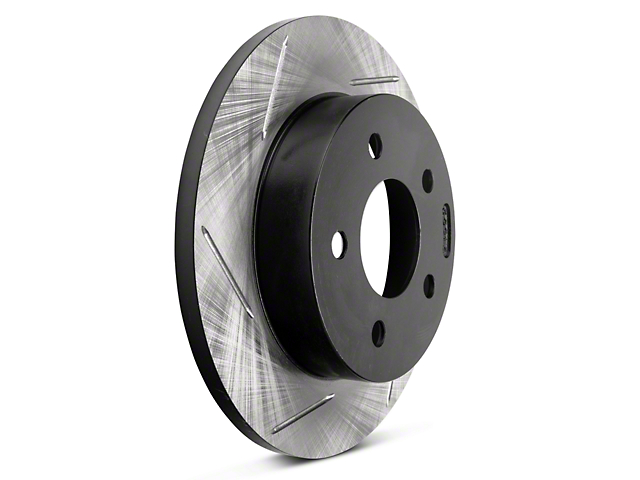 Hard-Charging Brake Rotor Engineering. Designed for the 1994-2004 GT and V6, the StopTech Slotted Rotors bring performance power and advanced braking to your classic Mustang. With these rotors in place, your Pony will brake strongly and stop in a shorter than stock distance even in very wet conditions. This is due to the slotted surfaces, which guide water and dust off the rotor faces rather than allowing them to remain so the pads “slip” on them. The rotors are also fully vented so that they won’t overheat and experience brake fade during heavy braking.

Fade Resistant, Fast Cooling Slotted Component. The StopTech Slotted Rotors begin with a set of high carbon cast iron blanks, with a 1-piece setup and fully vented design. The cooling vanes inside the vents are curved and directional for their side of the car. The rotor surfaces include multiple slots cut at an angle into the surface for pad refreshing and surface cleaning. The hats, edges, and vanes are coated in black e-coating to guard them against oxidation.

Designed for Intense Driving, Strong Stopping. StopTech Slotted Rotors spin cold air in their hub (the hole in the hat) and out their edges thanks to the directionally engineered ventilation vanes in their interior. This drops temperatures below the kneepoint where brake fading occurs, even when you’re using your brakes constantly during track use or similar sporty driving. The slots clean the pads, de-glazing them for maximum bite on every press of the brake pedal. The high carbon content of the cast iron means that the rotors won’t fracture under the stress of braking your vehicle hard.

Straightforward Fitment. You can install the StopTech Slotted Rotors as a bolt-on part, requiring about 2 hours and demanding no modifications or brake bleeding prior to attachment. They work with the factory pads and calipers.

Includes Two Rotors. The StopTech Slotted Rotors are sold in a set of (2) 10.51” slotted rear rotors.

No Warranty. The StopTech Slotted Rotors are supplied with no warranty. They are expressly sold “as is” and “with all faults” by the manufacturer.

Application. These StopTech Mustang Rotors are specifically designed to fit the rear of the 1994 to 2004 GT and V6 Mustang equipped with five (5) Lug rotors.

Reviews of StopTech Brakes products have an average rating of 4.8 out of 5

Fits Rear Only, does not fit Bullitt