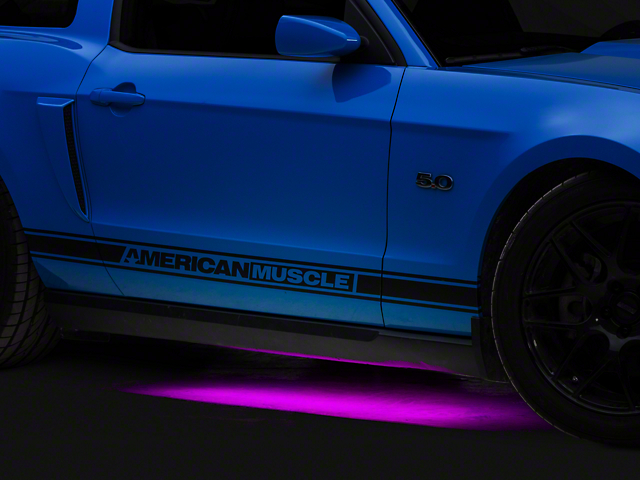 FREE Shipping
In Stock
Sorry, please enter a valid US or CA postal code
We're sorry, zip can't be updated at this time.
Choose options to add to cart.
Add to Cart
Close X
Enter Your Email to Save Products.
In Stock
View Open Box Items
Save for later
Create a list
Add to New List

Custom Lighting. Add unique custom lighting effects to your Mustang with a Axial 36 in. Flexible Color Shift LED Strip. This RGB LED strip features pre-determined cutting locations, which allows you to install customizable LED lighting on any surface you desire. Whether mounted underneath the body, in the engine bay, the interior or behind the grille, you can't go wrong with super bright LEDs to light up your Pony.

Color Control. Each kit includes a ColorSHIFT wireless, key FOB controller allowing you the freedom to select color options and performance. Light options include a rainbow's array of colors, as well as strobe and a soft fading, "breathing" option. You'll never be without the right option to fit your Mustang's personality and style.

Easy To Use. This 36 inch LED light strip is super flexible, allowing mounting on contoured surfaces for an exact fit. Designed to work in conjunction with your Mustang's 12V system this strip is ready to wire with pre-installed 3M tape and a switch to create a fully integrated custom lighting system.

Application. This Axial 36 in. Flexible LED Strip with ColorSHIFT controller is designed for universal fitment on all 1979-2020 Ford Mustangs including the LX, V6, EcoBoost, GT, Bullitt, Mach 1, SVT Cobra, BOSS and Shelby GT500 models. Additional wiring may be required for installation.

Reviews of Axial Lights products have an average rating of 4.5 out of 5