Find Oil Separators for your Mustang

Mishimoto Oil Catch Can; Carbon Fiber (Universal; Some Adaptation May Be Required) 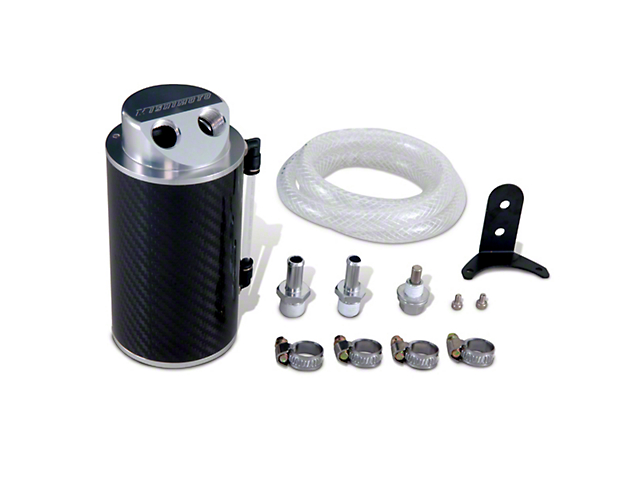 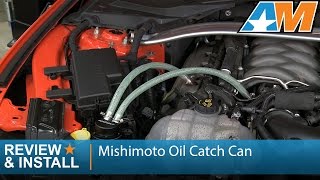 FREE Shipping
In Stock
Sorry, please enter a valid US or CA postal code
We're sorry, zip can't be updated at this time.
Choose options to add to cart.

Hey, guys, Stephanie with AmericanMuscle.com, here with the Mishimoto Oil Catch Can for all Mustangs from 1979 all the way up to 2016. This particular Mishimoto Oil Catch Can is gonna be a great option for someone looking for a universal catch can at the most affordable price to provide some protection for their engine.An oil catch can is a great way to protect an engine. It's a simple mod that does some good for all applications. You don't need to have a forced induction set up to be able to utilize a catch can. They do some good for completely stock motors as well. A catch can is a very functional piece that has a number of benefits to it.In order to understand why you need a catch can, even for an NA build, we need to look at the process of an internal combustion engine for a second. So the ignition of the air and fuel mixture inside the combustion chamber is ignited and it forces the piston down, yet a small amount of mixture that leaks past the piston rings and into the crank case. This is known as blow by. And in that blow by, there's an oil mist. The blow by and the oil mist will settle the intake over time and they're going to form a gunky build up.Now, technically speaking, there can also sometimes be condensation along with the oil mist and the blow by. And if we let all this hang out, worst case, the stuff can make it into the oil inside the crank case. This is not a good thing and it's considered oil contamination and delusion. And this is where the oil separating catch can comes into place. It's gonna push these gases, the blow by and the oil mist and the condensation, through a baffle system that's gonna trap the oil and separate it from the other gases. The gases are gonna be allowed to continue through the intake so that they can be burned off, and the oil will stay in the catch can so it doesn't move on and cause issues for the engine.So like I mentioned before, this is a universal catch can. It's not a direct bolt on or a direct fit can, so you can mount it anywhere it best suits your build, within limits of course. This can's made from aluminum and it has a nice finish, so it's gonna look good under the hood. They also make a carbon fiber version of this can as well, if you think you might like that one better.Now, this can also has this fill indicator on the side, which will let you know when you need to empty the can, and it has a 16-ounce capacity. So, 16 ounces is a lot, but you'll notice that the better catch cans actually catch a lot of oil. So the larger capacity of this can means that you won't have to be emptying this all the time. You can go a little bit longer in between servicing, if you will.The other thing I wanted to mention about this is that it does come with a mounting bracket and hardware, four clamps, two valves, and one drain plug, all of which are pre-tefloned for you, and a hose as well. I would just make sure to position the can to be in an easily accessible area so when you do need to empty the can, it isn't a fight.One thing I will say about catch cans in general, is to be wary. You want to make sure that you're getting a good one that will trap as much oil as possible. Some catch cans are just an empty container with a few ports, but these kinds are not going to be able to condense the oil vapor and trap as much oil as possible. You want to make sure that the catch can has an internal baffle and collection system for the best possible results. As far as price, you're looking at spending under $100 for this catch can from Mishimoto, which makes it the most affordable catch can. The carbon fiber version does cost a little bit more and you can always go with an oil separator as well, which still has the same function, but it is a direct fit piece that works in line with the PCV valve.So the install here is really pretty easy. You're looking at spending about an hour's time, and this is going to be a one out of three wrenches on the difficulty meter. Since this is a universal catch can, you have a little bit of room to play around with how you want to install this. You do need to get to your PCV valve and then determine the best location to mount the can. Before you mount the can, I would just suggest having all of your fittings into place so that the can's ready to bolt right out. Then it's just a matter of running your hoses. You connect one length of hose to the PCV fitting on your cold air intake and run it to the catch can. The other hose will need to be ran to the PCV valve itself. And if there's any extra hose left over, you can always cut that off of course.Wrapping things up here, the Mishimoto Universal Oil Catch Can is a fast and easy way to protect your motor from blow by. It's gonna work for both NA and forced induction cars. It's made from aluminum and it has a 16-ounce capacity. As always, you can check it out more online right here at AmercianMuscle.com.

Reduces Engine Sludge. A catch can helps reduce power robbing engine sludge by diverting "blow-by" (a combination of exhaust gases and oil) into a outside container "catch can" where the contaminated oil is separated from the exhaust gases before they are recycled back into the intake system to be re-burned, thus preventing the used oil from re-enter the system to gum up your engine.

Quality Materials. This Mishimoto Carbon Fiber Oil Catch Can comes with aluminum caps on both the top and bottom of the can, while the can itself is made of 100% Carbon Fiber.

Application. This Mishimoto Carbon Fiber Oil Catch Can has a unique universal design making it perfect for use in any supercharged, turbocharged, or naturally aspirated Mustang to help your engine run cleaner.