Most Popular in Resonators and Mufflers

Resonator vs Muffler: What is the Difference?

Once you know the difference its time to decide on an option. Choose between a vast amount of products from many manufacturers of mufflers, resonators, and muffled-resonators.

Mufflers and resonators have their own distinctive properties that alter how your Mustang sounds. While the two are similar, the differences are crucial enough that replacing a muffler with a resonator or vice versa can completely change your Mustang's vocals. Let’s dive in. 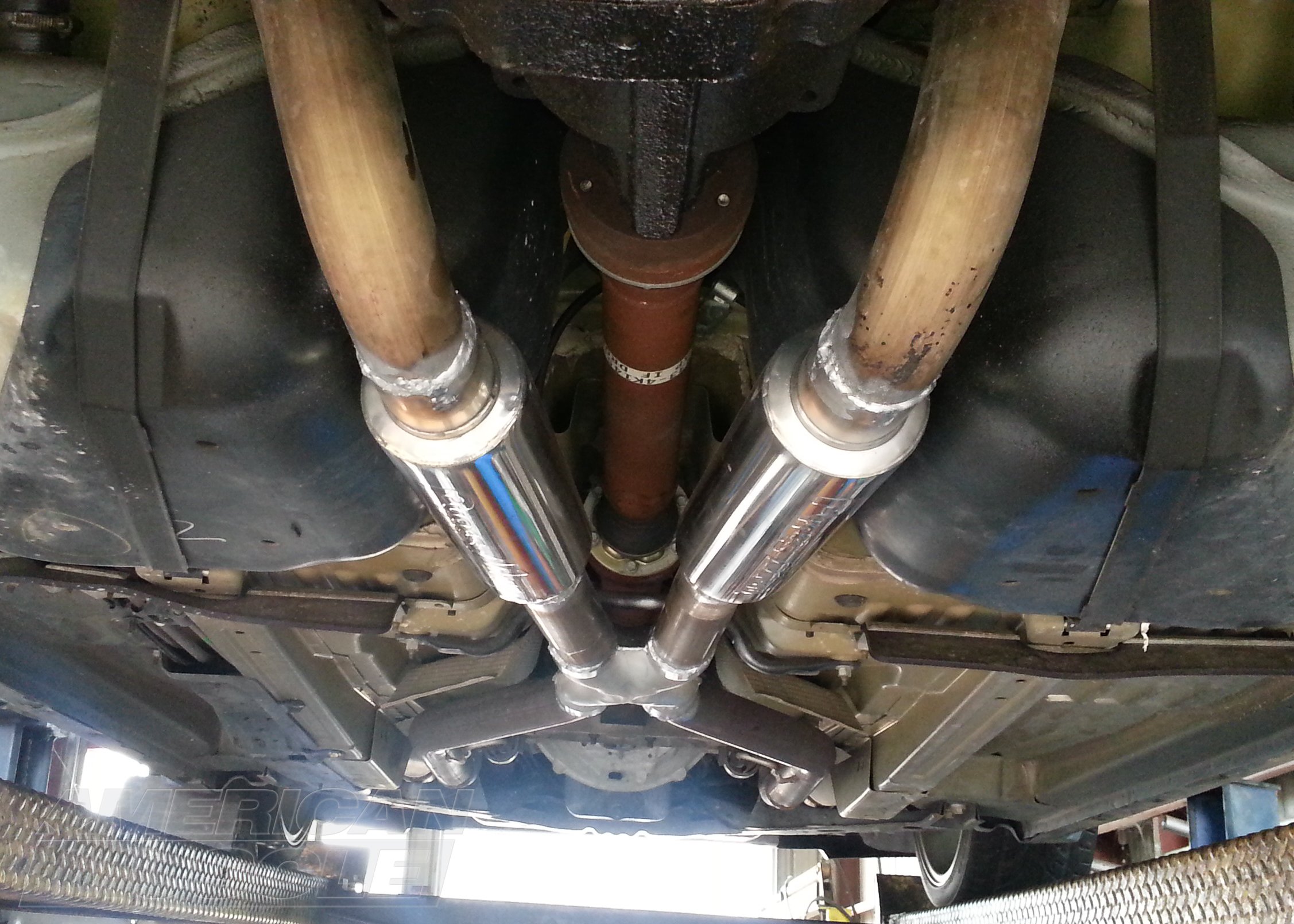 Getting The Note Right

One of the many joys of owning a Mustang is the ability to customize it and make it your own. This is thanks to the accessibility and incredible amount of quality aftermarket parts. What better option than to start with changing the exhaust system? Searching for the perfect exhaust note is an obsession with Mustang owners, and why wouldn’t it be given everyone is partial to a different exhaust frequency. Some like to announce their approach. Others like to let you know they’ve passed. Whether you like a mighty roar, a raspier growl, or virtually anything in between, the aftermarket Mustang exhaust industry has come up with every conceivable exhaust component to get your ‘Stang sounding exactly how you want it.

Having such a vast pool of quality pieces to choose from is stupendous, but sometimes can be overwhelming. Throw in marketing and technical talk and choosing the right piece can be hard. In the aftermarket exhaust world, the terms ‘resonator’ and ‘muffler’ are often bandied about. You may even occasionally run across a hybrid (or Frankenstein) ‘resonated-muffler’. 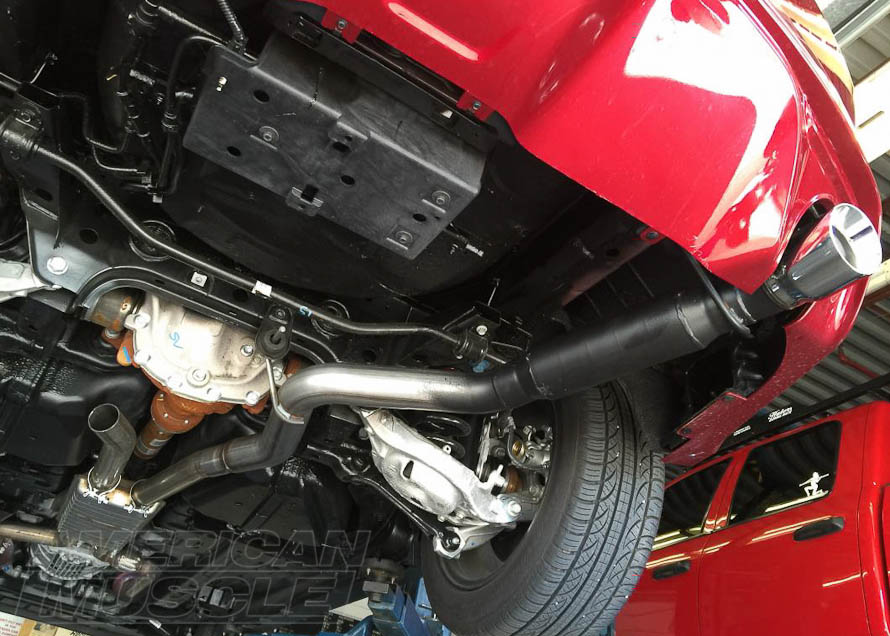 What is a Muffler & What Does it Do?

A muffler lessens engine sounds to an appropriate and acoustically pleasing level. How does it work? Technically, a muffler quiets the engine by reducing the sound pressure emitted. The factory mufflers on your Mustang are made to sound good, but are restricted by efficiency concerns, ease/cost of manufacturing, and of course sound level laws. For many enthusiasts, the stock mufflers are too conservative.

Mufflers are engineered with multiple chambers that direct gases and reduce exhaust pressure. These chambers feature perforated tubes or baffles – maybe even both. Exhaust passes through these perforated holes and baffles, resulting in expansion. As the gas expands, its pressure lessens, and consequently so does the sound level. Furthermore, OEM mufflers are often packed or lined with materials (such as fiberglass) as a soundproofing measure to further absorb the sound inside the muffler and emit less ambient noise. The baffling also increases engine backpressure by decreasing how fast the exhaust gases leave the system. Excessive back pressure can hamper performance.

Muffler Delete Costs: What Does it Take?

Research five more topicsDeleting the mufflers on your Mustang averages around $250. Granted, this cost comes from a proper replacement set of pipes specific to your generation pony.

By far the cheapest way of deleting mufflers is to acquire a piece of straight pipe from your local auto store and clamp it in. However, that solution should be considered a last-ditch effort because of the lack of reliability and potential lack of being able to revert back to stock (or even utilize an aftermarket exhaust later).

What is a Resonator & What Does it Do?

A resonator cancels out a certain range of sound frequencies. Without getting too scientific, sound is simply a pressure wave emitted at a certain frequency. Like waves in the ocean, sound waves have certain amplitudes (comparable to overall size), a crest, and a trough. At the beach, when the crest of a wave meets the trough of a wave of the same size, the two waves actually cancel each other out and the wave will die. The exact same principle applies to sounds waves. If you have two sound waves of the same size and frequency meet crest-to-trough, they too will cancel.

This begs the question, what range will be canceled? Well, that's left up to the engineers. Typically an automotive sound engineer will choose an unpleasant range and build the resonator to eliminate that frequency or set of frequencies. Eliminated noises include harsh pitches or ranges where the exhaust produces a loud drone or irritating buzz.

One of the best uses of a resonator is to compliment an existing setup. For example, if you've already gotten the right note you want but still have a persistent drone, adding a resonator can eliminate that drone while preserving the desired note. In the same vein, replacing your muffler/baffling with resonators is the equivalent of straight piping your exhaust with a touch of finesse. Placing a resonator upstream of the muffler would help quiet the engine a little, but not likely to the extent you would think. Resonators are not designed to reduce volume, but in this instance, the resonator would slightly lower volume because the exhaust would lose sound energy as it meets minor resistance. Realistically, if the sound of your Mustang is much too loud, it is best to replace the mufflers with a toned down version.

Note for 2015+ Mustangs: The suitcase resonator pack in the stock exhausts is two perforated tubes surrounded by fiberglass packing, acting as a muffler instead of a resonator. The suitcase's job is to mix the exhaust from both banks and keep things quiet, but S550 owners will tell you a mid-pipe is going to be your better choice for both quality sound and exhaust mixing. In this case, a "resonator delete kit" is an ideal upgrade. 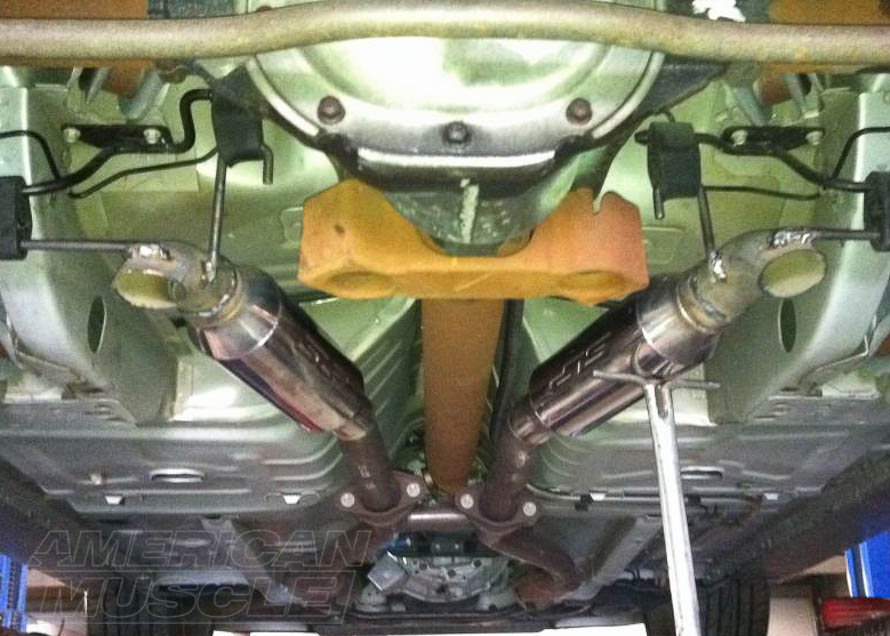 So what does a resonator do for your Mustang? A resonator makes your overall exhaust note louder and more aggressive. It's not quite a straight-pipe, but it isn’t too far off. Resonators also have less baffling and don't reroute exhaust gases as much as a muffler. This reduces back pressure, potentially freeing up a few horsepower.

Note: Nowhere does it say that a resonator lessens sound. It only eliminates certain frequencies. If you have a resonator that only cancels out songs by Cher, that’s great. The bad news is Madonna will still be as loud as ever.

Also keep in mind stock resonators are located in your respective mid-pipe, before the mufflers, and after the catalytic converters.

The last to look at is a combination of the two. So what exactly happens when a muffler is mated with a resonator? Well, it’s actually pretty simple. You will have the characteristics of each device. Certain unpleasant ranges will be totally eliminated, and the overall note out of the tailpipes will be hushed. Truth be told, most modern mufflers utilize this combination design. At first it was prevalent amongst luxury vehicles, but now it's considered an industry standard.

Resonator vs Muffler: The Quick Differences Between Them

How Do I Tell if My Resonator is Failing

A resonator can go bad for a multitude of reasons. A resonator is essentially like a muffler and can fail in similar ways. One way to check for failures is to inspect it for cracks along welds and seams. Additionally, you could check for rattling when the car is not running (since it's not hot and also quiet) and potentially narrow it down to the resonator. Third, resonators have the potential to rust out. If rust flakes are coming from the tailpipe, it could be from a failing resonator.

Wide-Pipes, Modifications, and Keeping it Legal

Some enthusiasts choose to swap out their resonator with a wide-pipe (open chambered) mid-piping for improved sound and volume, but as always it is important to check with your state emissions to see if it's within regulations. As a general rule of thumb, as long as you have catalytic converters (cats) you will be legal, but it is good to double-check if there are other laws that may apply to you, especially if you are a resident of states like California. Aftermarket mid-pipes can include catalytic converters for those of you with street 'Stangs. Track dedicated builds on the hand can reach for the off-road mid-pipes without worry. 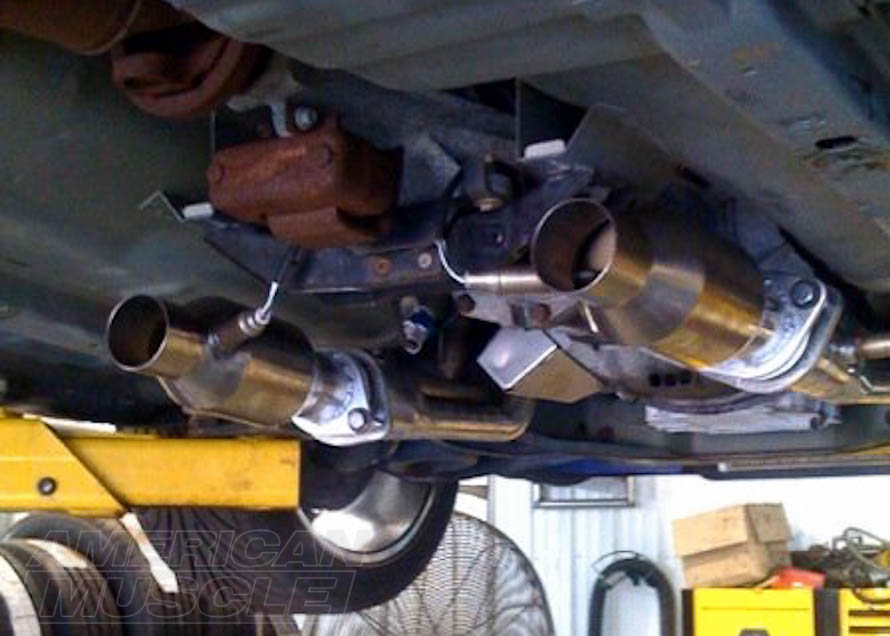 Maybe you know what type of muffler you want, but what brand? In this article we discuss two of the biggest names in mufflers.

Your mid-pipe is also a major contributor to your Mustang's sound. Check out the differences between the various styles here.

More often than not, it's easiest to replace everything in one go. Cat-backs are the classic way of adjusting your Mustang's sound and netting power.