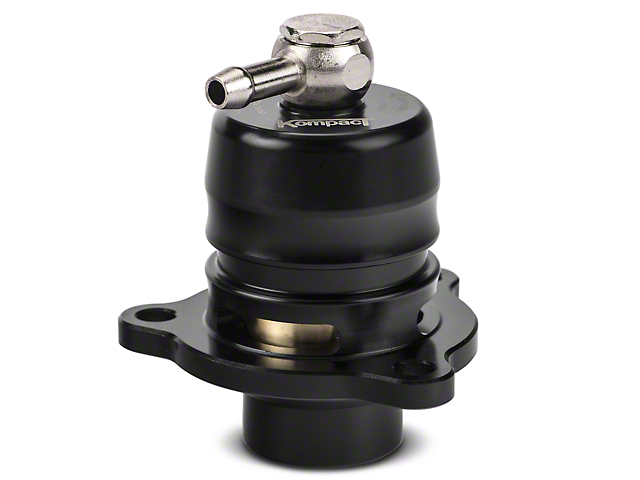 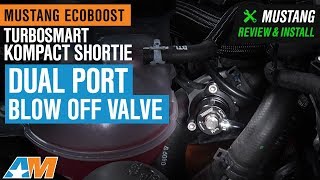 Hey, guys, Stephanie, with americanmuscle.com here with an overview of the Turbosmart Kompact Shortie Dual Port Blow Off Valve, for the 2015 and newer EcoBoost Mustang. In this video, we're going to be talking about a few things with this blow off valve, including the install. I'll get more into the install later, but I can tell you right now that the install for this is going to be a one out of three wrenches in the difficulty meter. This Turbosmart Kompact Shortie Blow Off Valve is going to be something that you should check out if you're interested in an aftermarket blow off valve to run more boost or for aesthetic reasons. An aftermarket blow off valve like this one that vents atmospherically is going to be much louder than the stock blow off valve or a circulating one, but at the same time, it's going to be able to handle more boost than the factory one, as well. Anytime you look at bumping up boost on a turbo car, you have to make sure that your set-up can handle it, and that's going to include everything, from the turbo itself, through your inner cooler, to your wastegate and your blow off valve. In this case, this blow off valve can handle up to 40 psi. This is mechanically operated by a vacuum, so it's vacuum-activated, which is different than the stock blow off valve. The factory blow off valve is electronically controlled by the ECU, so there's going to be a difference there. One upside of a blow off valve that's mechanically controlled by a vacuum like this one is that it keeps consistent manifold pressure. You're going to want that consistent manifold pressure for performance reasons. It helps to keep the turbo spooled [SP] for better throttle response. If you see a dip that's too hard in pressure, you're going to have turbo lag, and that's not fun in between shifts. Another feature of this blow off valve is that it's adjustable. You can adjust the firmness and therefore the function of the blow off valve. A softer setting means that it's going to take less pressure for the blow off valve to function or blow off the pressure that's built up, and a firmer setting means that the valve will keep that pressure for longer, which will require more boost in order to open the valve. Your adjustment point is the cap. You just rotate the cap of the blow off valve in order to adjust it. When it comes to adjusting, you're going to do that during the install, and Turbosmart does give you a really good set of directions to help you out with that. But I can tell you right now, that you can pretty much tune this at an idle, sitting in your driveway. Your basically going to be testing for pressure drops, and you want to make sure that you have the valve set, so that when the car's idling, you can free rev it, and it will fall right back into a smooth idle. You don't want to see the car dip in RPMs or even stall out. Another plus of the Kompact Shortie is actually in the name. Turbosmart made this an effective blow off valve but one that's on the smaller side with smaller dimensions, which can alleviate some of the things that you run into when you start upgrading with aftermarket turbo set-ups. Sometimes, [inaudible 00:02:23] can get tight when you start upgrading, but luckily, this is a compact valve so it's going to help you out there. Like I mentioned earlier, this does vent atmospherically, which is what's going to give you that sound that you're looking for. As far as construction, this is made from aluminum alloy, so it has durability and strength. And internally, you're looking at a two-piece piston that's made from brass and aluminum. This is also lightweight, and the piston is also O-ring sealed. The springs are also an important part of the mix, here, and they're engineered to make sure that the blow off valve is as responsive as possible, especially considering the boost capabilities of the blow off valve. When it comes to price, you can expect to pay between $200 and $300 for this blow off valve. This is slightly less expensive than TiAL's offering, which is a little bit of a different type of blow off valve. Still, this is the only adjustable blow off valve that's currently available for the S550 EcoBoost, but you can always check out your other options when you're out there shopping. The install is a one out of three wrenches in the difficulty meter, and you can expect to spend about an hour getting this installed. You do need to tap into the PCV valve on the back of the throttle body for your boost reference adapter. You need to get your vacuum hoses into place, as well as remove your stock blow off valve. The Turbosmart Blow Off Valve will take its place, but it is only installed one way, so just pay attention to that. You just connect your hoses after that and plug in your solenoid. Once everything is installed, you can adjust your blow off valve, and like I said, Turbosmart gives you step-by-step instructions on how to do that properly. Wrapping things up with the Turbosmart Kompact Shortie Dual Port Blow Off Valve, this is a small-sized compact blow off valve, so it can fit in a tight location. It's an adjustable blow off valve, it can handle up to 40 psi, and it's made from aluminum alloy. As always, I suggest you check it out more online for yourself. And for all things Mustang, keep it right here at americanmuscle.com

View Full Transcript
Allows for Higher Boost. The factory blow-off valve (BOV) is fine for the daily commuter car, but if you are planning on increasing the boost and performance of your EcoBoost Mustang you are going to need a Turbosmart Kompact Shortie Dual Port Blow Off Valve that can handle the extra pressure - up to 40psi.

Vacuum Activated. Unlike the factory Ford blow-off valve that is electronically controlled by the ECU, the Turbosmart Kompact Shortie Dual Port Blow Off Valve is mechanically operated by vacuum for consistent manifold pressure that helps keep your turbo spooled for better throttle response.

Application. The Turbosmart Kompact Shortie Dual Port Blow Off Valve is designed for use on all 2015-2020 EcoBoost Mustang's equipped with the turbocharged 2.3L Inline 4-cylinder engine.

I'm new to the car scene so excuse me for my silly question. If i replace my stock bov with this dual port blow off valve will it affect my car in any way? Will it run perfectly fine with a stock tune? and is this one recommended for daily driving. 2017 ecoboost

Helpful (6) Thanks for your input!

After installing does the factory boost gauge still work?

Why is some people having problems with the engine light coming on. thanks

Is there an intallation video? I searched YouTube and this website and I can’t seem to find one. Thanks!

How much for the blow off valve its self? no adapters or hoses 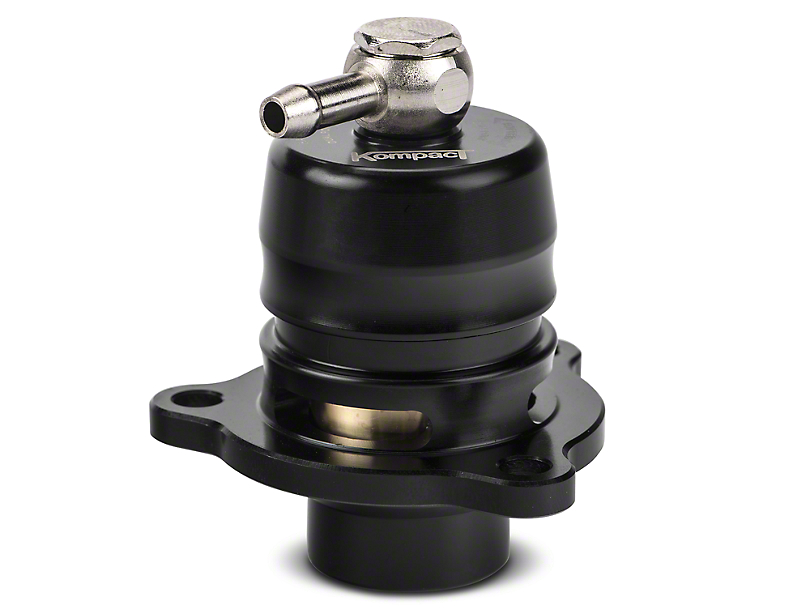