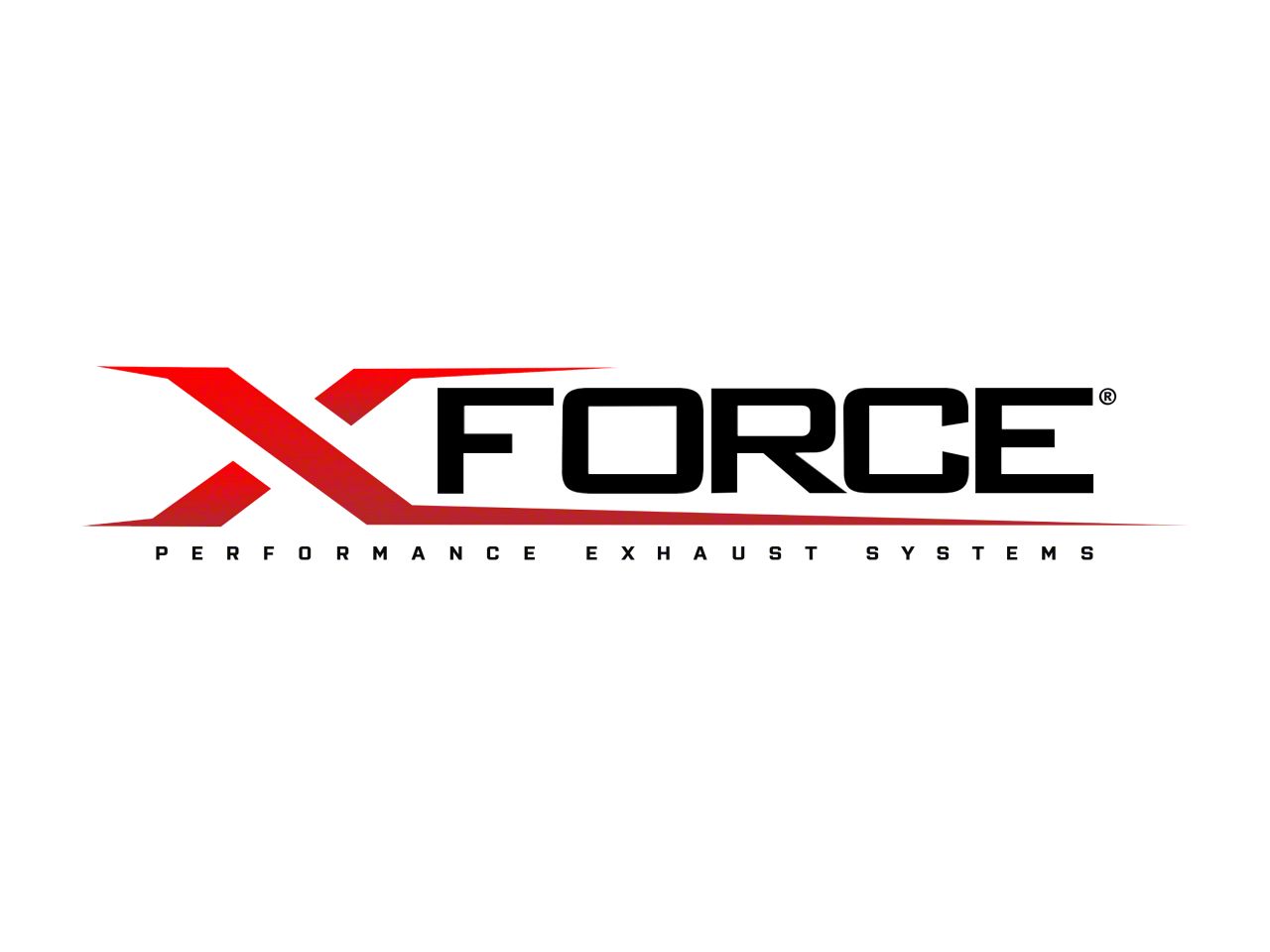 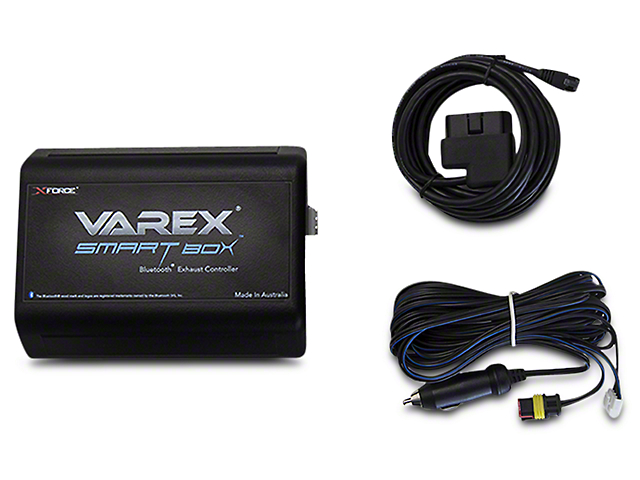 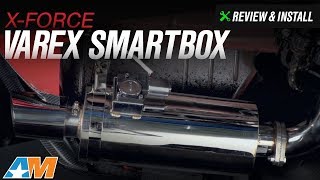 Hey guys, Stephanie with americanmuscle.com here with a review and an install of the X-Force Varex Smartbox, available for all 2015 and newer EcoBoost and GT Mustangs that have the X-Force exhaust system installed. We're gonna be talking about a few different things with this Smartbox today, we'll mainly talk about what exactly this piece is, what it does, and the install. The install for this is easy, it's a one out of three wrenches on the difficulty meter, but I'll get more into that later.You should be checking out the Varex Smartbox from X-Force if you have a Varex cat-back for your S550 GT or EcoBoost and you want a greater ability to change the sound and loudness of your exhaust on the fly, the one thing included, key fob, gives you. So X-Force makes an exhaust called the Varex, and it's a tunable exhaust that comes with a key fob. When the user presses the button on the fob, the exhaust valve will move or tune until the button is released. This allows the user to make the exhaust as loud or as quiet as they want to.Now, unlike those traditional cutouts that are generally fully open or fully shut with no options in-between, Varex gives you the option to customize your sound with the level of adjustment, essentially giving you five different mufflers in one, as Varex puts it. This is achieved by opening the butterfly valve in different increments, changing the tone slightly along the way. This works to change the tone and all, but you aren't able to precisely control the valve position, and there's no feedback of what exactly the valve position is. You'd have to guess. And there isn't any memory on the valve position either. This Smartbox changes that. It allows you to create presets and monitor exactly the valve position, so you know where you like your settings. It also has some preset valve options for you as suggestions, so you can just hit a button and quickly change your exhaust tone. The preset positions are closed, 25%, 50%, 75%, and open. But if you don't like these preset options, you do have the ability to customize them to your liking.The Smartbox also has a matrix mode as well, which will allow you to program a setting that'll automatically change the valve position while you're driving. You can create parameters around the valve ranges, like RPM, throttle position, and speed. Now you can get crazy here and really customize your exhaust. There really isn't anything else on the market like this. This is really technical and involved if you want it to be or simple if you just wanna stick with normal settings. But you can get really in-depth here.So we've discussed manual mode and matrix mode, but this also has a geo mode as well. Geo mode lets you change the sound of your exhaust automatically according to your location. You're gonna find a region on a map and then set a particular exhaust sound for that region, and the Smartbox will automatically change for the sound for you while you're in that region. All you have to do is make a circle on a map on your smart phone screen to set the region. So the way this all works is through an app that links to your smart phone. You'll be using your phone to customize everything and set up these parameters, so you won't have an entire device with a screen to locate in your interior, you just connect to your smart phone. I like this because you aren't burdened with trying to find the location for a screen, and you can just adjust things as you like to. You're gonna get your control module and a power cable in the box, along with an OBD2 cable, but you'll also have to download the app as well to have full access into this.When it comes to price, I will say right now that this is technical and there's nothing else like it. You can expect to spend between $300 and $400 for this Smartbox. But also keep in mind that it needs to be used with the X-Force Varex cat-back. I will agree that this is a little pricey, but it's not like you have to buy it at the same time as the cat-back. You'll be able to make your own custom exhaust sound with this device, which is pretty neat.As far as the install, everything is completely plug-and-play. You can expect to spend about a half hour, tops, since you'll be tucking away some cables. And this is gonna be a one out of three wrenches on the difficulty meter. You're gonna connect your OBD2 cable to the port, plug in to your control module, which can be hidden anywhere in the car, you tuck away your cable, and run your power cable to the Smartbox as well. The power cable runs to the motor on the mufflers, and then you just need to tuck away all the cables to your liking. It doesn't get much easier than that.Wrapping things up with the X-Force Varex Smartbox, this is an incredible piece of technology designed to be used with the Varex cat-back exhaust. It allows you to fully and automatically change your exhaust tone depending on a number of factors, and it's used through your smart phone screen. As always, I suggest you check this thing out more online for yourself. And for all things Mustang, keep it right here at americanmuscle.com.

Noise Control In Your Hands. There's nothing quite like the roar of a Mustang's performance exhaust system. That is until you're driving downtown late at night or you're five hours into a road trip with a headache. The XForce Varex Smartbox allows you to adjust the noise of your exhaust system. All you need to do after installing the Smartbox is use a simple smart phone app via Bluetooth.

Adjustability for Enhanced Oversight. An improvement upon previous FOB exhaust noise adjusters, this smart phone system features 2 distinct modes to give you greater control. The manual mode enables precise adjustment of Varex valve positions in the exhaust. You can create custom presets in this mode. XForce Varex Smartbox also includes the matrix mode, which provides real-time, automatic control of the exhaust valve positions. The matrix mode utilizes information about the RPM, throttle, and speed to adjust automatically.

Hidden Power. Sleek but durable, the XForce Varex Smartbox can be subtly tucked away in the cabin wherever you would like. The power and OBDii cables can be hidden under carpets and even inside some inner panels to conceal the set-up of this useful control system.

Application. The XForce Varex Smartbox is intended for use on 2005-2020 Mustangs. The smartbox is compatible Varex Exhaust Systems, Mufflers or Cutouts. 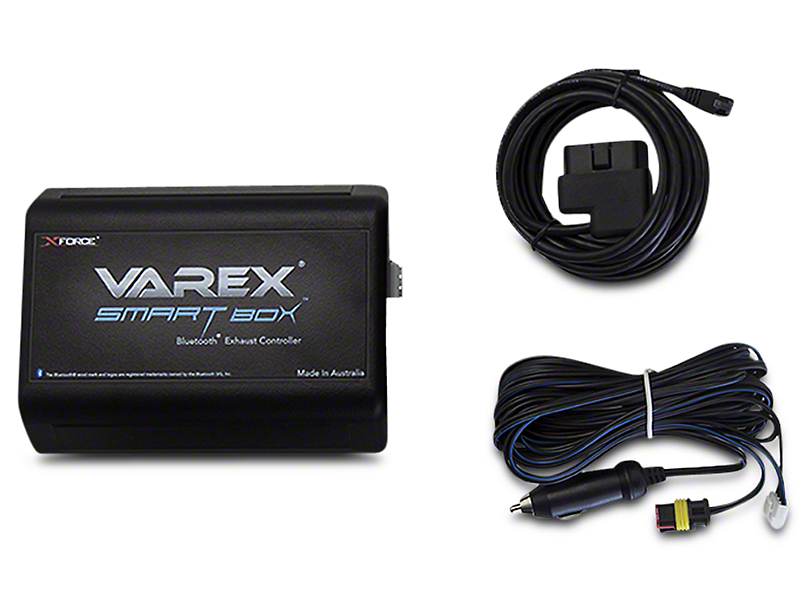