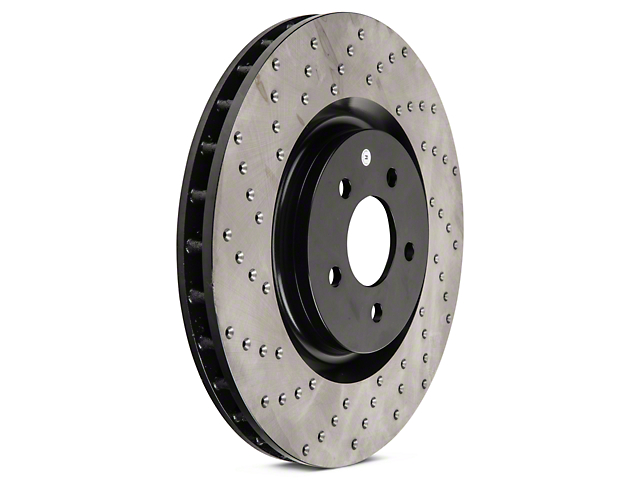 Powerful Design for Improved Braking. When you want to shave just the right amount of speed off your 2007-2014 Mustang during a G-force causing turn, or stop fast when you slam on the brakes, StopTech Sport Cross-Drilled Rotors, Front Pair make those into real possibilities. The design includes cooling features such as venting and carefully designed vanes that greatly increase heat loss, preventing brake fade. At the same time, the cross-drilling keeps the pads unglazed for plenty of grip, with very strong initial bite for plentiful stopping power.

High Carbon Rotors for the Thick of the Action. The construction of StopTech Sport Cross-Drilled Rotors makes use of cast iron with extra carbon that prevents brittleness (and hence eliminates the risk of cracking). Black e-coating protects the hats, so that corrosion won’t cause lateral run-out. The e-coating is also present on the edges and vanes. Cross-drilling is carried out with care and precision to fall exactly between the internal cooling vanes.

Wet or Dry Bite, Fading Resistant. Amplifying the effect of venting, the StopTech Sport Cross-Drilled Rotors’ vanes are curved to match the direction of rotation on both the driver and passenger sides of the vehicle. This creates an outward suction that makes cool air rush into the central “eye” and then out along the venting channels. As it goes, it cools the metal, preventing the brakes from reaching the kneepoint where gases form on the rotor surface. Brake fluid boiling also won’t occur. The spinning of the rotors generates this internal “wind,” which also pulls air in through the cross-drilling to keep the surface free of dust, water, and debris (for powerful wet braking and reliably short stopping distances).

Bolts On Easily. The installation process of the StopTech Sport Cross-Drilled Rotors is very simple, bolting them on as exact fit replacements for the stock rotors. You can use the OE wheels or fancy aftermarket wheels with these rotors precisely as desired.

Offered Without Warranty. StopTech specifically offers no warranty of any kind on their Sport Cross-Drilled Rotors. The customer agrees to take them “as is” and “with all faults” by purchasing them and opening the packaging.

Fits 2011-2014 GT Mustangs with the Brembo Brake Package Only