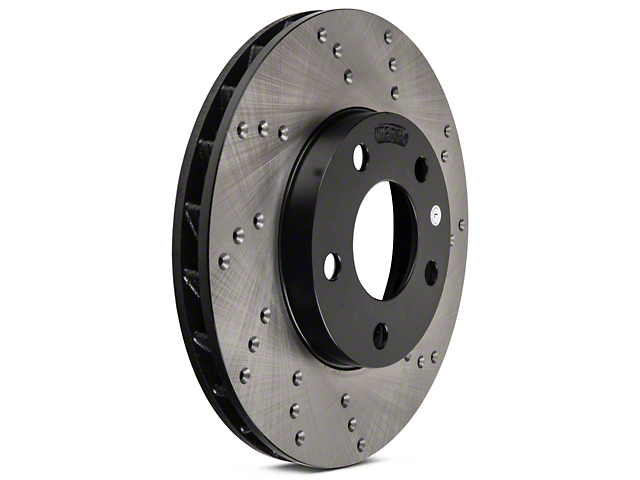 Cross-Drilled Rotors for Augmented Power. When you’re thinking of an upgrade for your 1994-2004 GT or V6 Mustang, StopTech Sport Cross-Drilled Rotors, Front Pair, sharply improves the brake response and power for more exacting maneuvers plus greater safety at speed. These rotors offer performance grade levels of functionality, with cross-drilling that keeps the disc clear of brake dust and debris and very strong initial bite. They’re also a fierce-looking fashion accessory for your Stang, adding an eye-catching detail showing through the wheel spokes.

Advanced Precision Manufacture. Made rugged for long use under high performance conditions, the StopTech Sport Cross-Drilled Rotors are one-piece designs. The robustness of the pieces is also augmented with greater carbon content, which raises tensile strength. The rotors are vented to allow increased air flow over the metal and heat dispersion. The cross-drilling is carried out with precision so that it matches properly to the interior ventilation channels.

Run Cool and Brake Hard. Operating almost like a centrifuge, the StopTech Sport Cross-Drilled Rotors pulls in cold air through the central eye in the hat when it’s in motion. The curved vanes inside work somewhat like the blades of a fan as the brake rotor spins, pumping air through and out the edges. The curvature of the driver and passenger side discs matches the rotational direction to make sure the air flows strongly and gets rid of the heat efficiently, preventing brake fade, which happens when temperatures get too high. This action also creates a draw in through the cross-drilling, so the holes allow brake dust, friction gases, and water to flow into the vents and blast out the sides rather than building up on the rotor – creating strong traction between pad and rotor for excellent stopping power.

Bolt-On Fit. Attachment of the StopTech Sport Cross-Drilled Rotors to your Mustang can be carried out provided that wheels and brake fittings function with stock-sized rotors. These components are a direct-fit replacement for the original parts.

Sold As Is. Warranted protection from the manufacturer is absent from the StopTech Sport Cross-Drilled Rotors. Though sold brand new, they are accepted as “with all faults” and “as is” by the purchaser through the act of buying and unpacking them.

Application. This pair of 10.87" front StopTech Sport Cross-Drilled Rotors are specifically designed to fit the 1994 to 2004 GT and V6 model Mustangs, excludes Cobra, Bullitt and Mach 1.

Fits Front Only, does not fit Bullitt