Without your transmission operating properly, your Challenger is stuck in place no matter how powerful the engine. In fact, transmissions are rated by torque and horsepower much like an engine. WIth drastic engine mods should come equally drastic transmission upgrades. High stall torque converters, for example, are an excellent idea for drag strip bound Challengers for better launches.

It's all fun and games until something breaks. Your Challenger's transmission, a system often forgotten under the great banners of horsepower and speed, is as critical to track times as your engine and suspension. Each transmission has its own quirks and perks and understanding both will help you in the long run with your Challenger build. 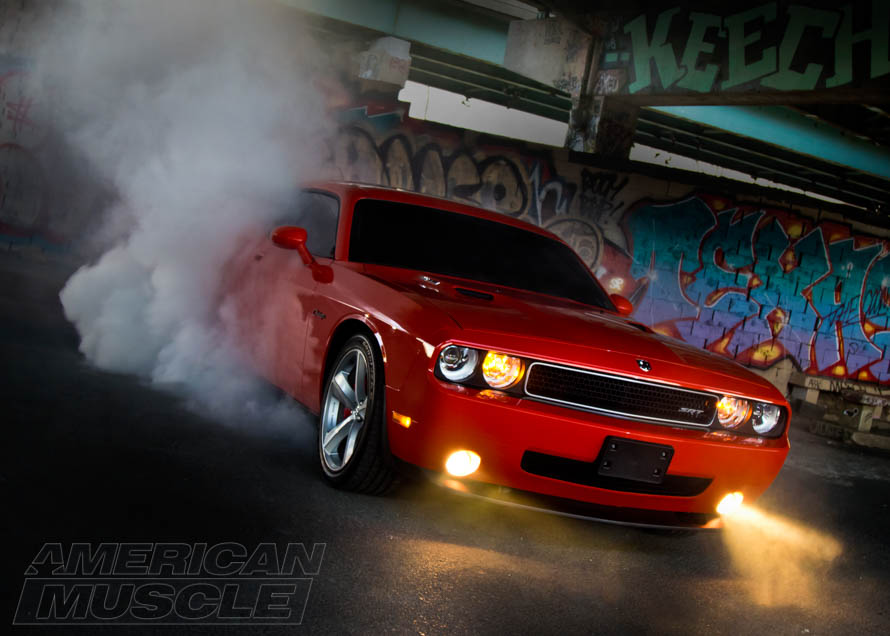 The 42RLE transmission is a 4-speed automatic transmission developed by Chrysler Corporation. It was the only automatic transmission available for 3.5L V6 Chargers for the year of 2009. Part of the Chrysler Ultradrive family (which debuted in 1989), the 42RLE is an upgraded 42LE unit that has been modified to accommodate a rear-drive platform. The 42RLE uses three planetary gear sets, one overrunning clutch, and is electronically controlled. Featured in the stock converter is an electronically controlled torque converter clutch that aids shock absorption under hard shifting or wide-open throttle scenarios. Using Mopar ATF 4 fluid, the transmission has an overhaul fill capacity of 8.80 quarts (8.3L).

The 42RLE is a light-duty transmission that, frankly put, is outdated in the modern age of fuel efficiency. Thus, it was dropped in 2009 and only the W5A580 was available as an automatic, regardless of engine.

The WA580 automatic transmission was available only when paired to the 5.7L or 6.1L V8 in 2008. Beginning in 2009, this 5-speed automatic made by Mercedez-Benz became the only automatic transmission available in the Challenger lineup, mated to both V6 and V8 engines. With a max torque capacity of 430 ft-lbs in OEM form, the WA580 is an electronically controlled tranny with a lock-up torque converter. It also features adaptive electronic control and a manual shift mode. While it is hydraulic pressures that still actuate the gears, the shift pressures are controlled via the transmission control module and electronic solenoids and valves, which allows greater precision which translates to smoother, faster, and more reliable shifting. Dodge occasionally references this transmission under the name NAG1, which stands for New Automatic Gearbox (Generation) One.

Some enthusiasts have found the WA580 to be slow​ shifting, but the reality is that it can still shift faster than a manual transmission. Other complaints are that it is sensitive to fluid quality and quantity - even small amounts of moisture in the fluid can cause the internal clutches to act up.

New to the Challenger (but not new to Dodge/Chrysler) in 2015 was the replacement of the WA580 with the second generation ZF 845RE, 8HP70, and 8HP90 8-speed automatic transmissions. Part of the Torqueflite family, these second generation 8-speed automatics can be fitted with any engine. The new Torqueflite transmissions are capable of shifting in a non-sequential manner and have a shift time as low as 200 milliseconds. Efficiency improvements have been made to this generation over the first gen models, namely seeing a wider ratio spread, reduced oil pump pressure, and a decrease in shift drag. These transmissions have adaptive electronic control, which changes the behavior of the transmission to match the driving habits of the driver, and can be paddle shifted via a manual driver interactive control mode.

The 845RE has the lowest torque capacity of the bunch and thus is fitted to the 3.6L Pentastar. The 8HP70 is the standard choice for 5.7L and 6.4L V8 Challengers, with a torque capacity rating of 520 ft-lbs. The 8HP90, which is the strongest of the bunch, is rated at 665 ft-lbs and is standard on the SRT Demon.

Given the maturity of this transmission design (remember, it is a second generation design, with the first being used by BMW and Porsche, amongst others, for at least 10 years before being brought to the Challenger lineup), it is quite reliable and without any major faults. As long as it is serviced properly at the required intervals, the Torqueflite transmission is able to take a beating. Speaking of service, there is no longer a dipstick to check the fluid - it must be done with a scan tool. Furthermore, the transmission filter is integral to the transmission fluid pan, thus to change the filter one must change the pan.

Since 2008, there has been one manual transmission and one manual transmission only - the Tremec TR-6060. Based on the immensely popular T56, the TR-6060 is a close-ratio geared, die-cast aluminum 6-speed transmission. Compared to the T56, the synchronizer hubs have been narrowed to reduce shift travel and the synchronizer material has been upgraded to a carbon particle paper that will further improve shift performance. The forward gears are all helical cut and synchronized. Additionally, a 1-4 gear skip feature has been integrated to reduce driver shifting when loafing around town.

While it is typically a stout transmission, the most common complaints that surface in regards to this transmission relate to shifting notchiness or complete blockage when attempting to shift from 1st to 2nd in full throttle conditions. This is certainly a rare anomaly and usually the solution is to just let up mildly on the throttle while performing the gear change. It is also important that the transmission fluid is at the proper capacity (3.45 qts), type (Mopar ATF 4) and temperature.

Which is the Best Transmission?

Apart from the fact that the newer Torqueflite 8-speed transmissions are significantly better than their 4 and 5-speed antiquated brethren, it is difficult to concretely determine which is the best due to there being so many variables. If you want to know which is the best in terms of raw performance then it would be the 8-speed automatic that takes the cake.

Given its lightning fast shifts and active torque management capabilities, automatic equipped Challengers are likely to rip off the best times at the drag strip autocross track and street. Now in terms of fun factor, it is my personal belief that a manual gearbox can't be beat... but it will leave some time on the table.

The Role of a Torque Converter

Torque converters are mated to automatic transmissions and serve two purposes: 1) to transfer the engine power to the transmission and; 2) to let the engine continue running when the car is at a stop. It uses a hydraulic fluid coupling to achieve this and is capable of torque multiplication when there is a difference between input and output speed.

There are three basic components to a torque converter: a pump, a turbine, and a stator. The converter housing is attached directly to the engine flywheel and the interior of the housing is lined with specially angled fins - these fins serve as the pump. When the housing spins, the blades fling the transmission fluid to the outside of the housing (due to centrifugal force) and thereby creates a vacuum in the center which is used to draw in more fluid. The fluid is pushed to the turbine, which is connected to the transmission. The turbine also has specially angled fins that are designed to change the direction of the fluid by the time it is exiting the turbine. As the turbine spins, it moves the input shaft of the transmission which then is transmitted to the wheels. The stator sits in the middle of the converter, sandwiched between the turbine and the pump. Its job is to reorient the fluid coming from the turbine (this fluid is now moving in the opposite direction of the pump) as it passes back to the pump.

A torque converter has three operating conditions: stalled, acceleration, and locked. A stalled condition is when the converter is spooling, but no transfer is being made to the transmission. Converters are rated at a certain stall speed, but this speed does not signify the point at which the car will move. Rather, the stall speed is simply the RPM at which the converter can no longer hold back the engine (can no longer stall the engine) if transmission output is prohibited (on the brakes).

The acceleration phase has the Challenger moving, but there will be a sizeable difference between pump and turbine speed - the pump will be spinning faster than the turbine (similar to a clutch slipping). Torque multiplication occurs during this stage.

Finally, the lockup or coupling stage is when the turbine is within 90% of the speed of the pump. A lockup clutch will actuate and lock the turbine to the pump, thereby creating a 1:1 spinning ratio. No torque multiplication is occurring as now the transmission is connected directly to the flywheel speed.

The reason behind swapping to an aftermarket torque converter is to obtain a different stall speed. Aftermarket torque converters come with a higher stall speed than stock, which allows the engine to spool into its optimal powerband before launching the car. This translates to better acceleration off the line and to significantly better 60 ft times. Calculating and deciding on stall speed is a complicated process as there are very many variables to consider. Engine power and torque delivery, camshaft profile, transmission, and rear end gearing, intended use of the Challenger - these are just some of the factors that must be examined when determining a new stall speed converter. Thus if you are looking to upgrade your Challenger's converter, you should seek the advice of a professional in order to make the optimal choice.

Concerning the automatic transmissions, there are no aftermarket shifters available. Given the complexity and computer-controlled nature of the transmission, the stock shifters are adequate. If looking for better performance out of one of the automatics, a lot of tuning can be done via a handheld tuner (shift points, firmness). If this is not enough, aftermarket performance valve bodies and solenoids are available that will harden and speed up each shift.

In terms of the Tremec TR-6060 manual, aftermarket shifters are available. The factory shifter already has a pretty low throw distance, however there is some slop in the throws due to the shifter lacking centering springs and inherent looseness in the shift rod linkage. An aftermarket shifter will correct these problems and enable faster shifting and eliminates the common problem of missed 2nd-3rd shifts.

Do I Need a Transmission Cooler?

Manual-equipped Challenger owners will be happy to hear that the answer is no. A manual transmission does not produce anywhere near the amount of heat an automatic transmission and thus does not need a cooler at all.

Turning to the automatic-equipped Challengers, they absolutely should be using one. In fact, Dodge does incorporate a basic transmission cooler into the OEM design. Depending on the year of the Challenger, a small cooler is either integrated into the lower radiator or the A/C condenser. As too much heat is detrimental to the life of an automatic transmission, keeping the fluid cool will ensure longer life and better reliability. If the temperatures are getting too hot (measured by onboard diagnostics or through the data center), upgrading to a larger aftermarket cooler is the smart choice. Even better, aftermarket coolers are not very expensive and are fairly easy to install. They just need to be mounted and the cooling lines connected to their respective port.