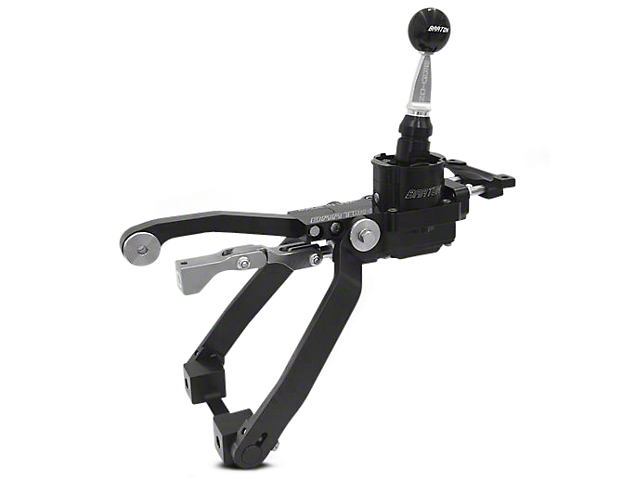 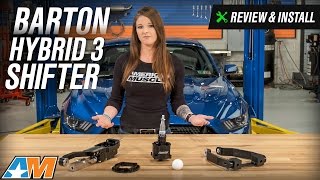 Precise, Smooth Shifts. The Barton Hybrid 3 Shifter with Flat Stick and Knob implementation is engineered for precise and effortless shifting on your 2015-2022 Ford Mustang GT. It's able to achieve 25% throw reduction while also increasing side-to-side distance between gears, allowing for easier, more forgiving shifts with little or no increase in noise. In addition, its side-to-side spring pressure feature lets you consistently make perfect 2-3 shifts, while its 3-bushing design eliminates most of the slop and deflection for highly accurate shifts.

Hybrid Functionality. The Barton Hybrid 3 Shifter with Flat Stick and Knob has a unique linkage design that allows you to install it either by using a transmission mount or by attaching it directly to the body. With the trans mount, the shifter is installed as a solid linkage, while mounting directly to the body frees a hinge point that permits the device to act as a pivot, moving where it needs to when you hit a bump on the road.

Retains Reverse Lock-out. The Barton Industries Short Throw Shifter was specifically designed to retain the Back Up Camera (if so equipped) and the Reverse Lock-out safety feature of the modern manual Mustangs to prevent accidentally shifting into reverse.

Superior Construction. CNC-machined in the USA from 6061 T6 billet aluminum and 303 stainless steel, for rock solid construction, this Barton short throw shifter includes all the hardware required for installation.

Application. The Barton Hybrid 3 Short Shifter with Flat Stick and Black Knob is designed for the 2015-2022 GT Mustangs equipped with the MT-82 manual 6-speed transmission. Flat stick and black shift knob are included.