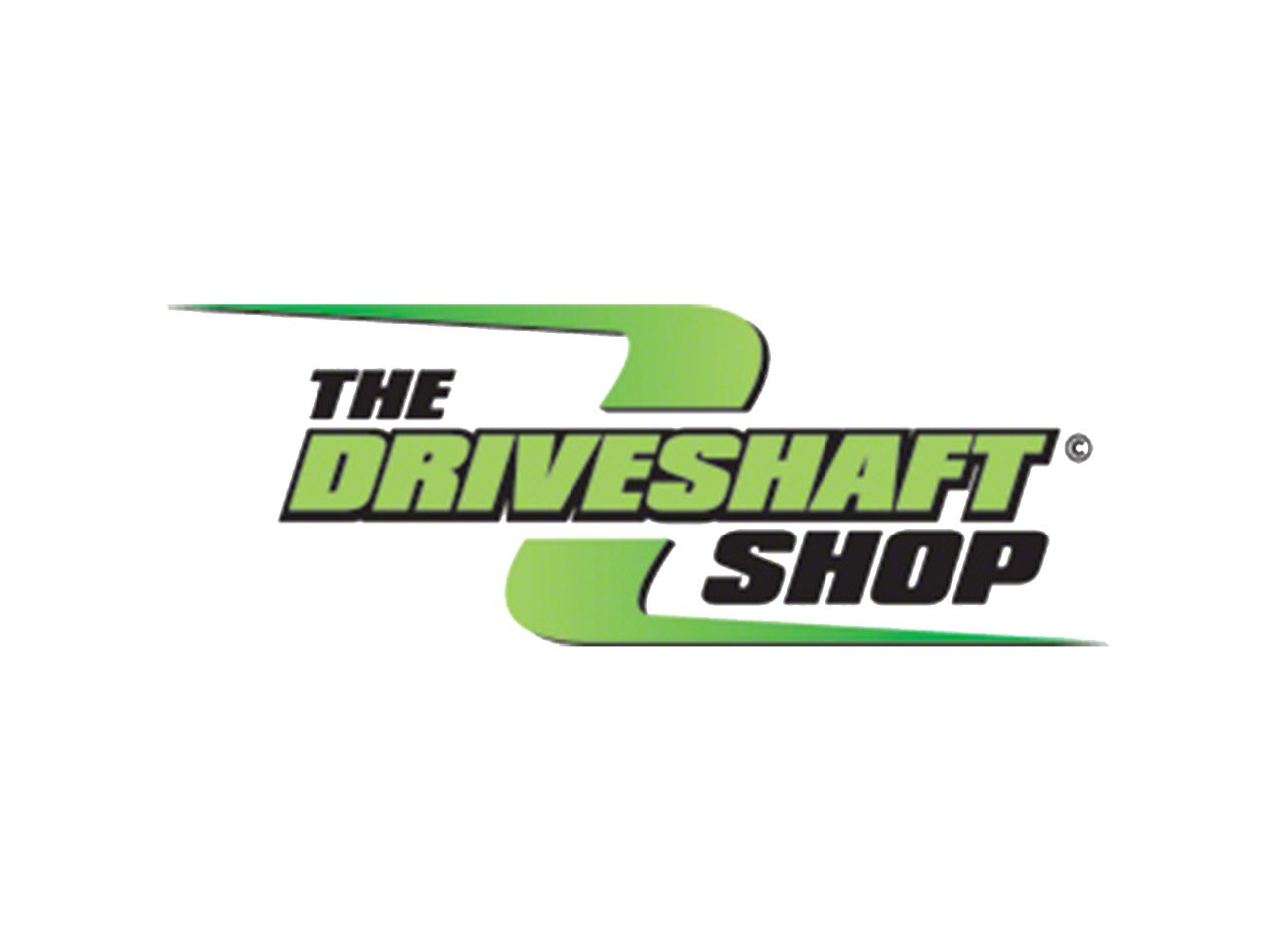 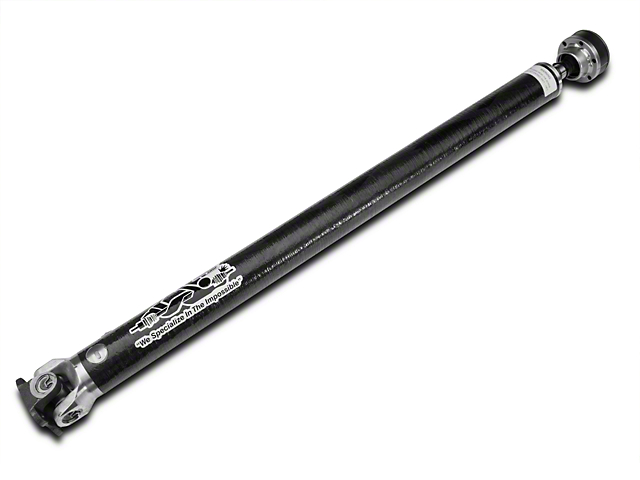 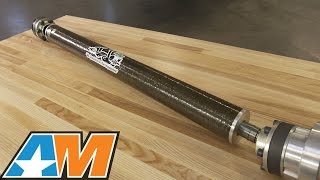 Hey, Stephanie with AmericanMuscle.com, and this is my review of The Driveshaft Shop's carbon fiber one-piece driveshaft for 2015 and '16 GTs.A carbon fiber one-piece driveshaft is going to be for any S550 owner that's looking to strengthen their driveline and drop some weight while they're at it. The 2015 Mustang still comes from factory with a two-piece driveshaft, which is going to inherently have some weaknesses. A big thing to call out here would be that the DSS driveshaft is going to be much lighter. We know that the stock driveshaft weighs roughly 33 pounds, and I have the scale to measure this carbon fiber version, which looks like it weighs right around 26 pounds. Now keep in mind that we do have the adapter plate on this guy, which is going to add a little bit of weight to this. The weight savings here should mean improvements such as faster revs, better throttle response, and less vibrations or clunking during driving.And looking at these driveshafts, I can tell you that I like the trans end for the manual version because it has a hearty flange with a solid-looking U-joint, and I like that the differential end for both options has a nice CV-joint that's going to be more stable than other options, like a slider. Another thing I like is the carbon fiber. The carbon fiber version is going to be lighter than even the aluminum one-piece driveshaft, and I know it's more expensive, between $1,300 and $1,400, but I think a carbon fiber driveshaft is nicer because of the way the material reacts to hard driving. It gives more of a torsional twist, way more than a stock driveshaft, and even more than the aluminum one-piece driveshaft, but without any kind of reverse snap. And, ultimately, the construction of this driveshaft and the carbon fiber should reduce the shock on other drivetrain components. If we were going to rate the driveshaft options, I'd have it go something like this: your stock one at the bottom, the aluminum one-piece next, followed by the top guy, which is this carbon fiber one. Now, with all of that being said, DSS rates this driveshaft as being capable of handling up to 1,000 horsepower.I would figure on about two hours for the install and about one out of three wrenches on the difficulty meter. You do have to drop your exhaust for the install, and you will need a handful of different socket sizes and hex sockets, and a hammer might be helpful, but you really want to make sure you have a torque wrench for this install so you can torque down your adapter plate and driveshaft insert.Again, the carbon fiber one-piece driveshaft from The Driveshaft Shop does cost a pretty penny, but I think it's a great mod that will both change a stock S550 and is a must-have to support more power down the road. It's at the top of my list for driveshaft options, but, as always, check this thing out online and see what you think for yourself. I'm Stephanie, and for all things Mustang, keep it right here at AmericanMuscle.com.

Light Weight. Lighter and stronger than the stock 2-piece driveshaft, The Driveshaft Shop's One Piece Carbon Fiber Mustang Driveshaft greatly reduces rotating mass to improve your Pony's 1/4 mile track times. Superior Quality. Constructed from 3.25" diameter High Modulus Carbon fiber tubing this driveshaft features a solid 1350 front Spicer u-joint with flange and adapter plate to mount directly to the transmission and a 108mm 6-bolt rear CV joint made from an all new 300M material. Extra Clearance. This light weight one piece carbon fiber driveshaft features a 3.25" diameter design giving extra clearance needed to avoid interference that can happen on lowered Mustangs equipped with a 4" shaft. High Speed Balanced. Balanced on one of the most sophisticated balancing machines in the industry, at up to 9500RPM (revolutions per minute) this one piece driveshaft is rated for use up to 1000 horsepower. Application. This one piece carbon fiber driveshaft from The Driveshaft Shop is designed specifically for use on 2015-2017 GT Mustangs equipped with a 6-speed manual transmission.

Please Note. The Driveshaft Shop Carbon Fiber One Piece Driveshafts are built to order for our customers and because of this, there can be a 5 to 6 week lead time on orders.

Both Aluminum and Carbon drive shaft are advertised as "light weight", but how much lighter are they? The videos mention they're 26 or 30ish pounds packaged, but that doesn't help. It would be very helpful to know the weight of the driveshafts.

Is this covered by a replacement warranty should it explode into a thousand pieces like the one in Stephanie's ride in the latest Hot Lap episode?

will this drive shaft work for a GT350?

Will there be noticeable increase in vibration and noise? 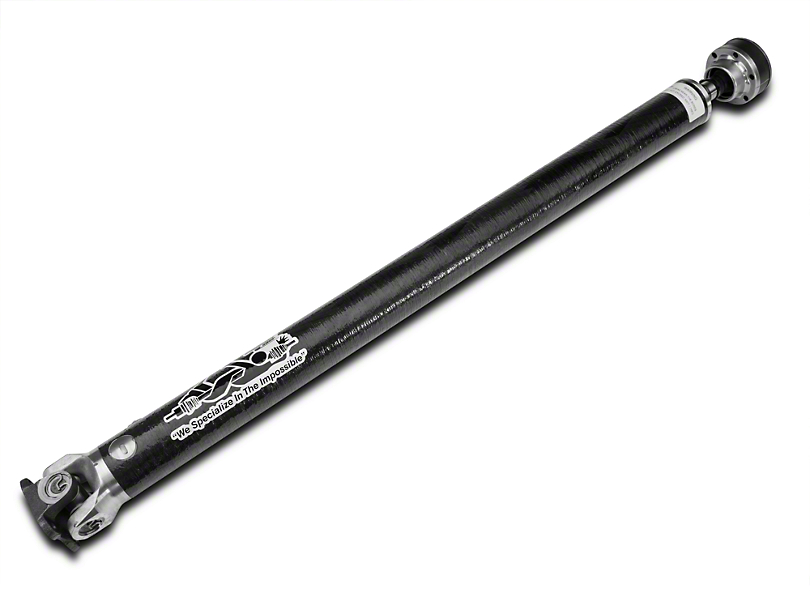