Find Control Arms for your Mustang 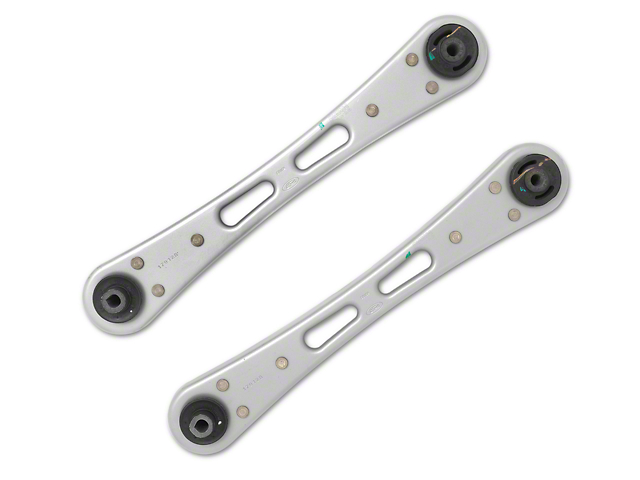 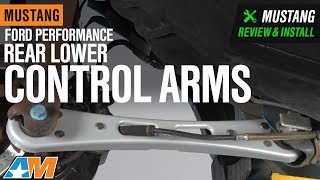 Justin: The Ford Performance Rear Lower Control Arms for the 2005 to 2014 Mustang would be an excellent choice for owners who are looking to replace a set of worn-out stockers but don't want some of the added noise, vibration, and harshness that can sometimes come along with a more aggressive aftermarket bushing. Now, these arms were original factory components on the S197 GT500, along with the Track Pack cars and do feature a durable steel build along with those high durometer rubber bushings for around the $120 to $130 price point. The simple two-bolt install could not get much easier as far as suspension components go, so I'll call this a one out of three wrenches on the difficulty meter here with a little bit more detail to come later in the video. So I'll be completely honest with you here, guys. These lower control arms from Ford Performance won't exactly be your most affordable option in the category and they won't even be the best bet when it comes to completely eliminating wheel hop. However, they will be one of only two options good enough to be stamped with that Ford logo, the other being your Boss 302R variant which are a little bit more expensive due to the more aggressive design along with the more aggressive components. But with all that said, I don't want you to think that these are a bad option. Again, quite the opposite. Just a reminder, they were the factory components, again, on the '07 to '14 Shelby GT500 along with being the OE arms on those Track Pack GTs. And while they don't appear on the surface to be much different from the standard or base lower control arms, the difference is going to lie within the bushings themselves. Now, these particular options do utilize what is called a high durometer bushing basically means that's a little bit firmer and ultimately that's what's going to help improve your traction and reduce the wheel hop over a set of base lower control arms or even a set of stock Shelby or Track Pack arms that may be suffering from higher mileage and worn bushings. Now, even though these things do feature a slightly firmer bushing, they still aren't nearly as firm as a poly bushing. And they aren't even close to what a spherical bearing would deliver. So, it's gonna have its pros and its cons. The pros, listen, it's gonna be a very streetable option, the Ford Performance arms here, they're not gonna alter the ride quality in any negative way, nor will it produce more noise, vibration, or harshness, like a firmer bushing would. The drawback is that those firmer bushings or spherical bearings are ultimately going to do a better job of stabilizing that rear end and, again, reducing that dreaded wheel hop. So, you have to ask yourself what is more important. You want a quiet, more compliant, comfortable ride, these might be a better choice or if you want a little bit more performance, you might wanna look into a more aggressive bushing. Now, if you did want a more aggressive bushing and would love to have something with that Ford stamp on it, again, feel free to check out the Ford Performance Boss 302R options which do introduce a polyurethane bushing, and again, will give you a little bit more performance. Now, if you wanted something with a poly bushing, but maybe didn't wanna pay that Ford performance price or premium, BMR has a few great options on the site to check out as well. Install really couldn't be much easier here, guys, so that's why I'm sticking with one out of three wrenches on the difficulty meter and maybe 30 minutes to an hour of your time to get everything in place. Man: First thing we're gonna do is pull our rear wheels off. Next, we're gonna remove the E-brake cable. We'll need a flathead screwdriver and a 10-millimeter socket to do this. Got an 18-millimeter ratcheting wrench here, we're gonna start off by removing the front bolt of the control arm. All right, we can remove the back bolt now. It's an 18-millimeter bolt with a 22-millimeter nut. We can do the same thing on the other side now. We're now ready to install our new control arm. We're gonna start off with the front bolt here, so we can slip it up into place and then stick the bolt right back in there. Once you've got the front started, we can get the rear bolt in place as well. You might have to move the rear forward slightly to get your bolt started. We're gonna do the same thing on the other side of the car now. Start off with the front bolt. We're gonna take E-brake cable and put it through the back hole of the control arm. From there we need to come up. Last step here is to put your wheels and tires back on. That's gonna wrap up our review and install. Be sure to check out more at americanmuscle.com.

Improve Traction. If you're not "hooking up" off the line, then a set of Ford Racing Lower Control Arms will certainly help. These lower control arms will eliminate wheel hop and improve traction, keeping your Mustang's rear end planted for firmer consistent launches.

Durable, Firmer Bushings. These Lower Control Arms resemble the stock GT control arms in appearance only. These Ford Racing Control Arms come with higher durometer (harder) bushings that are firmer and much more durable over the stock standard bushings.

Application. These Ford Racing Rear Lower Control Arms are designed as a direct bolt on replacement for 2005 to 2014 V6, GT, Bullitt and Shelby Mustangs.