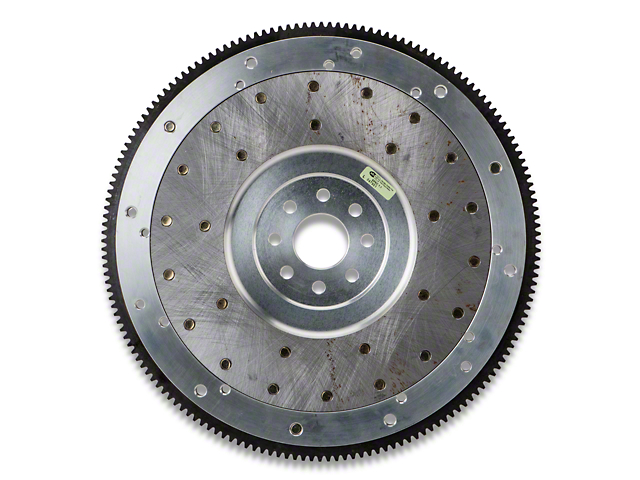 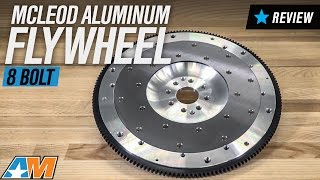 Hey everyone, I'm Justin with americanmuscle.com, and this is gonna be my detailed overview of the McLeod aluminum flywheel which does fit a wide variety of applications including your '96 to '04 Cobra and Mach I, the '99 to mid-2001 GT, and then finally all 2011 through 2014 Boss and GT Mustangs. So this detailed overview is gonna cover my thoughts on making the switch to an aluminum flywheel from McLeod, what some of the benefits are gonna be, and then finally we'll cover some of the bigger points of the installation process. And probably no surprise to anybody watching out there, the transmission will need to be dropped. And while that's not the hardest job in the world, it is a little difficult depending on your tool and lift situation. So I'm gonna knock it up to a soft three outta three wrenches on the difficulty scale with some more detail later on.So the aluminum flywheel from McLeod is gonna be a big time upgrade for the 4.6 and 5 liter owners out there who are still rocking that heavy factory flywheel or maybe a different steel aftermarket flywheel and wanna shed a nice chunk of weight from the rotating mass, help the car pull through the gears a little bit quicker, and maybe help the car just feel a little bit more responsive overall. Your only slight drawback when making the change to an aluminum flywheel like this might be a minor hit to your overall driveability in addition to the possibility of some chatter depending on what clutch you end up going with. That leads me to my next point. You can use whatever clutch you essentially want to here with the aluminum flywheel from McLeod, but it's been my experience in the past that sticking with the same manufacturers for both the flywheel and clutch typically gets you the best results.Now the argument between using a heavier steel flywheel and a lighter aluminum or chromoly flywheel is not exactly a new one, it's been around a long time, but the general rule of thumb to keep in mind is here, the heavier flywheel is gonna be beneficial in two big ways. First and foremost, it's gonna be great to get a big heavy car moving off the line thanks to inertia. In addition to that, it's also gonna make the car just feel a little easier to drive in stop-and-go type situations. Other than that, the lightweight flywheels are gonna shine basically everywhere else. I'm a big fan in removing rotational mass. I think it's nothing but a plus, and by switching to the aluminum option here from McLeod, you certainly are gonna be doing that. Let's get a little further into the construction and materials here with the McLeod option. Again, this is their aluminum version, CNC machined, 6061 T6 aluminum to be exact. Now this is just one of a few different options from McLeod for your flywheel needs. They do have a nodular iron version. They have a lightweight steel version that will be slightly less weight compared to your factory flywheel. We then have the aluminum version that we have in this video. And then last but not least, we have the chromoly steel version which will be the lightest of the bunch. Now all of these different flywheels of course have their own benefits and they will all vary in price slightly. Now McLeod actually recommends using this particular flywheel with both supercharged and turbocharged applications, or in their words, any car that sees rapid RPM levels, which honestly, let's be frank here, this could mean anybody, blown, boosted, naturally aspirated, it doesn't really matter. This thing is also SFI certified which is huge, because if you're serious about competing with your car, this certification is required in a lot of different sanctioned bodies of racing or different racing organizations. Other important things to point out include a ring gear featuring 164 teeth. The McLeod flywheel has also been zero balanced which means there's no need for any external weights or counterbalancing. And last but not least, it has been designed to fit the eight bolt m

Aluminum Construction. Manufactured from aluminum for light weight, this McLeod Flywheel features a ring gear of 164 teeth, an engine balance of 0 oz, and a eight bolt main pattern. Aluminum flywheels are perfect for force inducted applications where rapid RPM levels are desired.