What Mass Air Flow Sensor Size is Right For my Mustang?

Getting the most horsepower out of your Mustang without risking the possibility of damage to your motor requires the perfect air and fuel mixtures. Make sure your Mustang's mass air flow sensor is big enough to handle the task.

There are common misconceptions about mass air flow (MAF) sensors on Mustangs. Sometimes stock MAFs needs to be calibrated or replaced. Let’s address these issues. 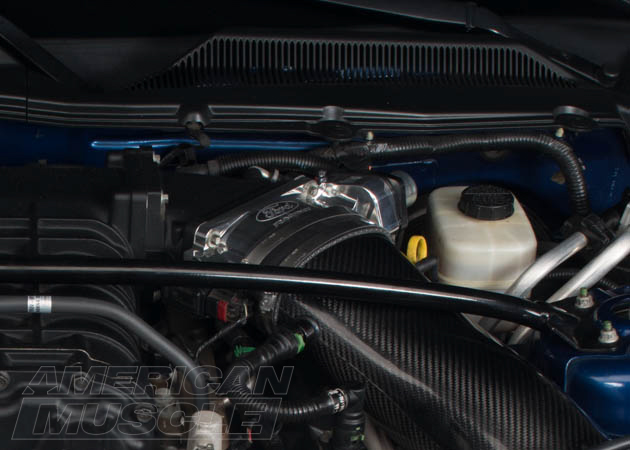 How Does a Mustang’s Mass Air Flow Sensor Work?

The MAF is rather simple in design and is located in the intake tube before the throttle body. There are two sensors in the MAF. One sensor measures the ambient temperature of the incoming air. The other sensor is heated to 200° C. When the mass, and speed, of air increases inside the intake tube, the heated sensor is cooled. The mass air flow sensor increases the voltage to maintain the temperature of the sensor. The change in voltage is recognized by the computer as a change in airflow. This lets the computer know there is more air entering the engine, and so more fuel must be added to maintain the proper air to fuel ratio (AFR). MAFs take multiple readings per second to ensure accuracy. Corrections and adjustments are determind by comparing tube diameter, sensor readings, and air temp. They are calculated against a preset table of air to fuel ratio calculations saved in the car's computer. These can be changed with a tune in most Mustangs. 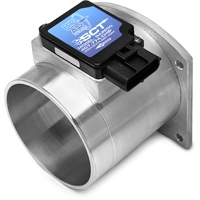 As with most sensors on the Mustang, the MAF sends information to the computer as a voltage reading with a maximum value of five volts. The more air that is recognized entering the engine, the higher the voltage. Once the airflow exceeds the capability of the MAF, the sensor becomes “saturated”. At this point the voltage has reached the five volt limit and cannot accurately measure any additional airflow. One can see how this would be an issue and this is where aftermarket mass air flow sensors come into play. 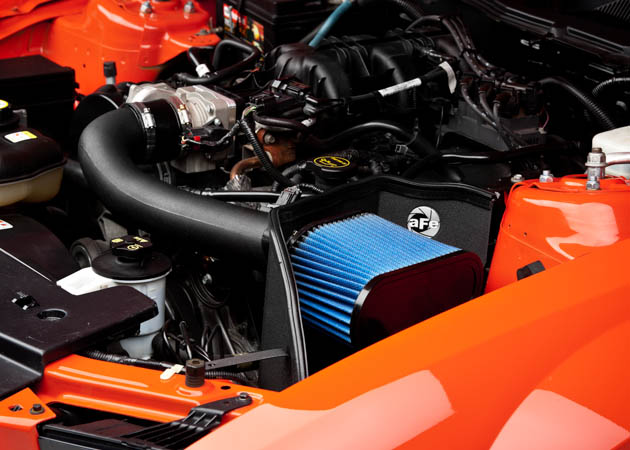 When Should You Upgrade Your Mustang’s Mass Air Flow Sensor?

If the amount of air the engine can process (volumetric efficiency) is increased, the MAF must be altered. For example, the Fox Body Mustangs came equipped with 19 lb./hr fuel injectors, and the stock engine was rated at 225 horsepower. With the addition of aftermarket heads, cam, exhaust etc., the airflow of the engine is increased. This increase surpasses the ability of the stock injector to satisfy the fuel demands. So, many Mustang owners upgrade to the 24lb/hr injector, or whichever injector is suitable to the power of the engine. The stock ford MAF for the 5.0 engines was calibrated to work with the 19lb/hr injector. When the injector size is increased, changes must me made to the MAF for the engine to operate properly. Most tuning shops can properly calibrate the MAF to the appropriate injector size. If you are significantly increasing either the airflow or fuel intake of the motor, you are going to need a new MAF to compensate 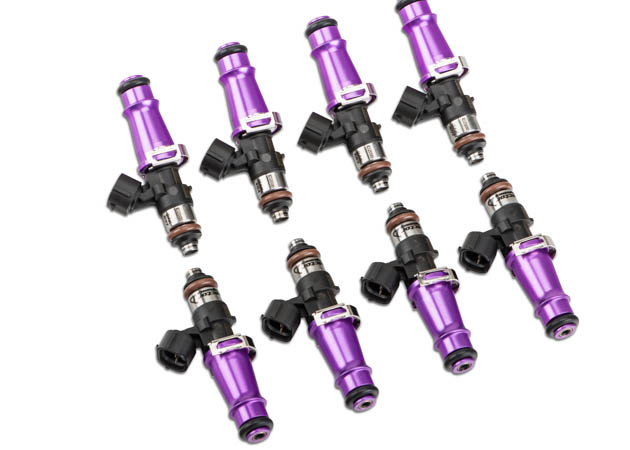 Do I Have to Change My Mustang's MAF with a Supercharger or Turbocharger?

In the scenario that a supercharger or turbocharger is used on your Mustang, the MAF must be changed as well. Stock MAF sensors on naturally aspirated cars are the draw through type. On supercharged/turbocharged cars they are blow through. For example, the supercharged ford lightning and the 2003-2004 cobra have a blow through MAF. This MAF is specifically designed for a supercharger. The housing of the MAF is also much larger. If you plan on forced induction, then plan on upgrading the MAF. Most tuners also prefer the blow through MAF on forced induction applications. 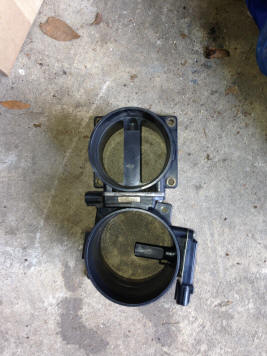 Should I Choose an Aftermarket MAF?

Although the factory ford MAF is a high quality piece, there are aftermarket options for those Mustangs ingesting more air or fuel than in stock form. SCT offers several MAF sensors for the Mustang for both naturally aspirated and forced induction applications. If you plan on sticking to the stock MAF sensor, there are options there as well. DiabloSport has a plug in connection for the MAF that prevents it from becoming “saturated”. This device can support in excess of 600 horsepower. 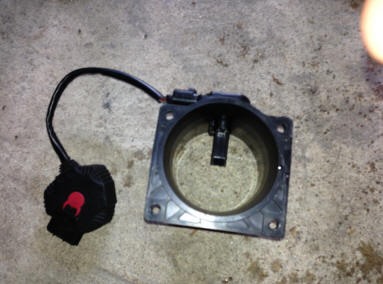 All in all, know that the stock MAF was designed for a stock engine. With upgrades that increase horsepower and airflow, modifications to the MAF are in order. On modern EFI systems, tuning can accommodate these changes to a point. On older systems such as the EEC IV (the EFI program for the 87-94 engines), the MAF must be altered. What ever route you choose, know that upgrading the MAF is not a daunting task and one should not be intimidated.

Do You Need a MAF With a Cold Air Intake And Exhaust?

No, you do not need to purchase a different MAF sensor. Replacing a MAF sensor is a great idea for those who are heavily modded (forced induction/intense NA build), but it is not needed for just a few basic bolt on modifications. In fact, stock mass air housings (1989-2004 Mustangs) and the stock sensors (all years) are always reused with an aftermarket cold air intake unless noted in special applications. 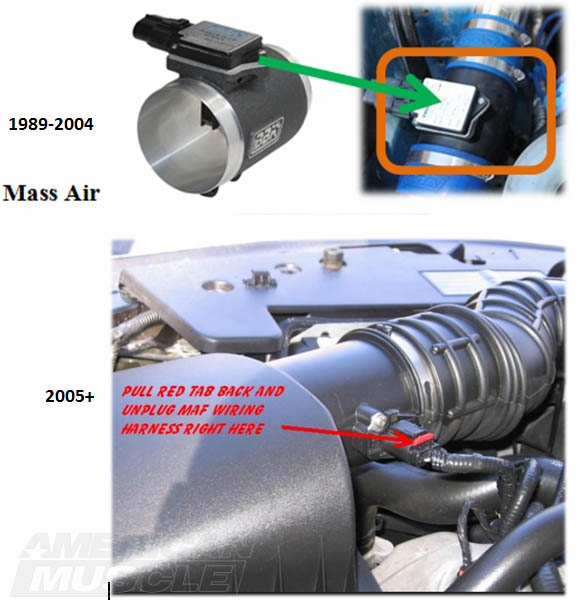 With the modern technology involved in engine management, tuning has become an entirely different animal. With the right knowledge and equipment, one can fine-tune their Mustang in ways like never before. The mass airflow sensor is an integral part of the tuning process, as it is basically “telling” the computer how much air is being ingested, and what changes need to be made. Out are the days of grabbing a screwdriver and tuning a carburetor and in are the days of hooking up your laptop to your car and data logging your performance. Make sure the MAF you choose fits the needs of your particular engine set-up. 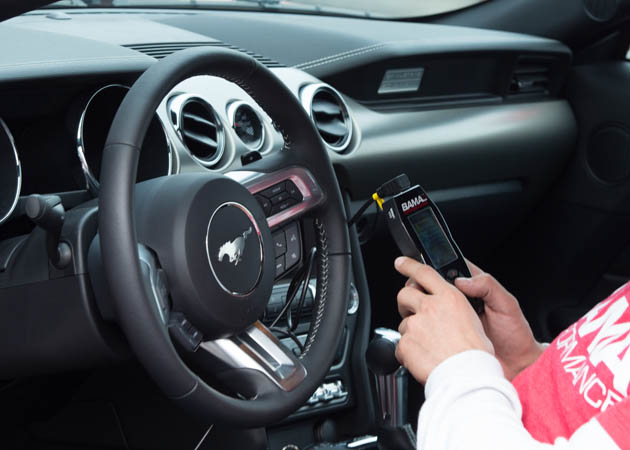